Ever since the Star Wars: Episode IX cast announcement last month, we have been using the Force to try and establish a better sense of how the array of new talent and veteran actors may be integrated into the timeline of the long-running intergalactic sci-fi franchise, especially as we move into the final chapter of the sequel trilogy.

However, while practicing our meditation, we were reminded about the importance of recognizing the small parts rather than focusing all of our energy on the core cast of characters. Both The Force Awakens and The Last Jedi are bursting with blink-and-you’ll-miss-them celebrity cameos across all four corners of the galaxy.

Occupied by a whole bunch of A-list actors and rising stars, these fleeting moments are not to be missed, though so often are, at least upon initial viewings. So sharpen your senses and join us, as we uncover the famous faces that can be found lurking in the background of various scenes, concealed beneath protective battle armor, or even lending a voice to one of the many bizarre alien creatures. 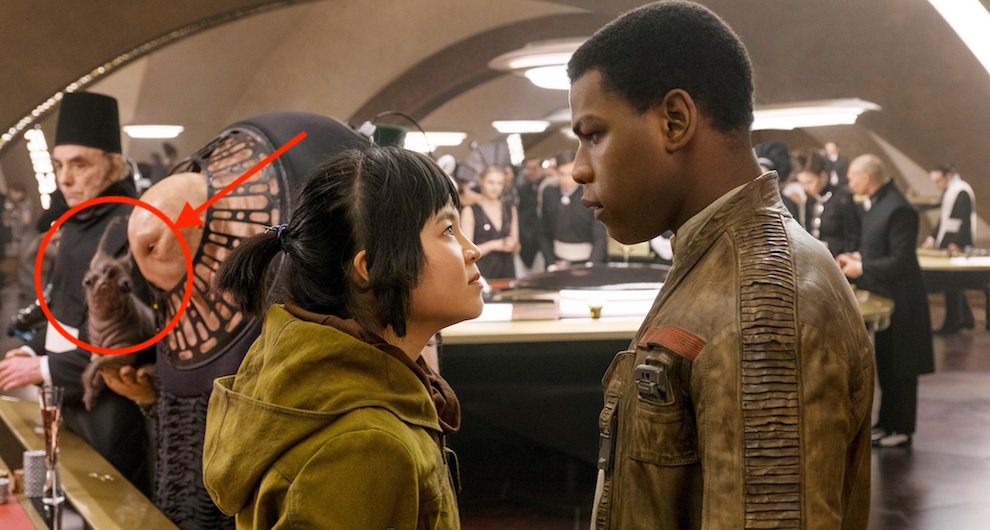 You may need to hit the paws button on this one, as the late Carrie Fisher’s beloved French Bulldog, Gary, has a pint-sized part in Rian Johnson’s The Last Jedi. The four-legged film star appears in the background of a scene that takes place inside the Canto Bight casino.

While Finn and Rose are featured at the forefront of the shot, the canine’s cameo can be spotted towards the edge of the frame, as an otherworldly creature cradles the recognizable pup in the palm of his oversized mitt. We are obsessed. 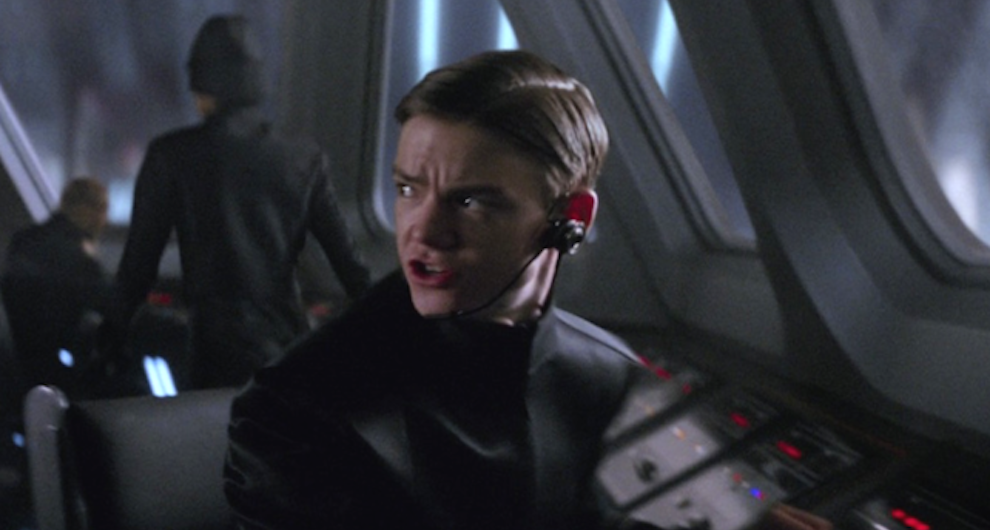 Over the years, Thomas Brodie-Sangster has appeared in a slew of successful roles for a number of well-known franchises, including a stint as Jojen Reed in Game of Thrones, but in 2015, he officially crossed over to the Dark Side when he turned in a one-liner as First Order Officer Thannison.

“We have an unsanctioned departure from Bay 2,” he asserts on the bridge of Starkiller Base as Finn and Poe commandeer a TIE fighter and try to escape from the Hangar Bay. 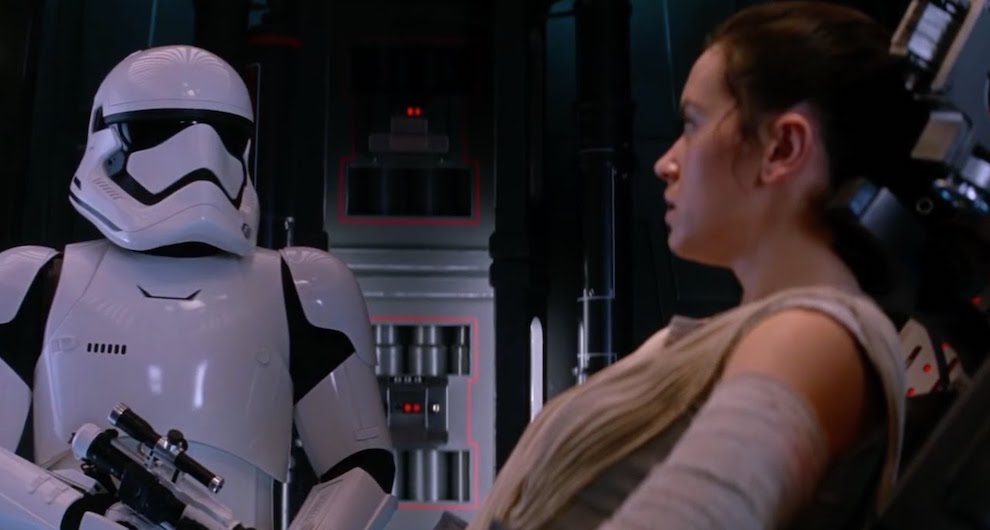 He may be a little short to be a stormtrooper but Daniel Craig decided to switch out his tuxedo for an all-white ensemble in the first installment of the space saga’s sequel trilogy.

Taking a break from saving the world as everyone’s favorite Secret Service agent, the high-profile actor pops up as a First Order stormtrooper, tasked with watching over Rey whose being held prisoner at the volatile hands of Kylo Ren. Using her Force-wielding abilities, Rey eventually convinces the trooper to remove her restraints, leave the cell door open, and drop his weapon. Don’t quit the day job, eh? 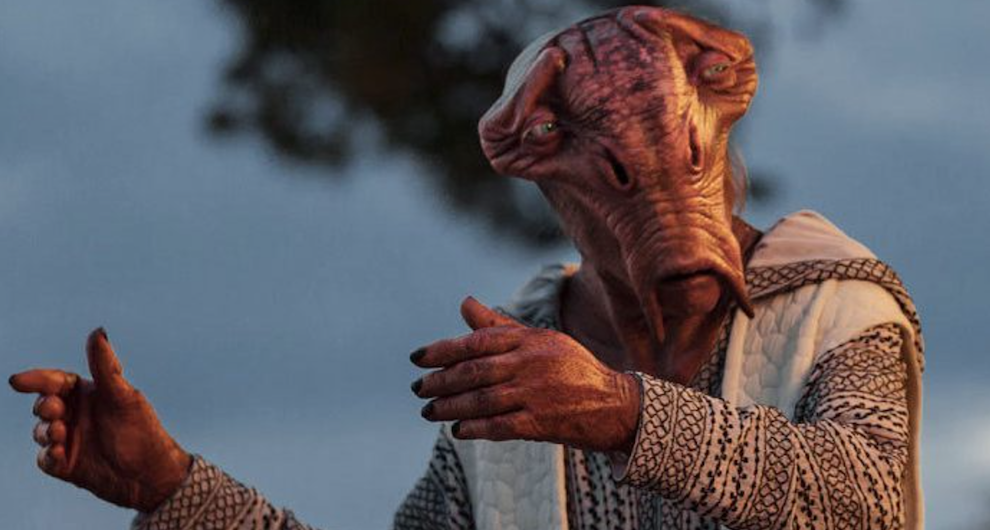 His character, Slowen Lo (whose name is a reference to the Beastie Boys song “Slow And Low”), is the beach-dwelling alien with a Southern twang who alerts the police to Rose and Finn’s illegally parked Resistance shuttle. No one likes a tattletale… except on this occasion. 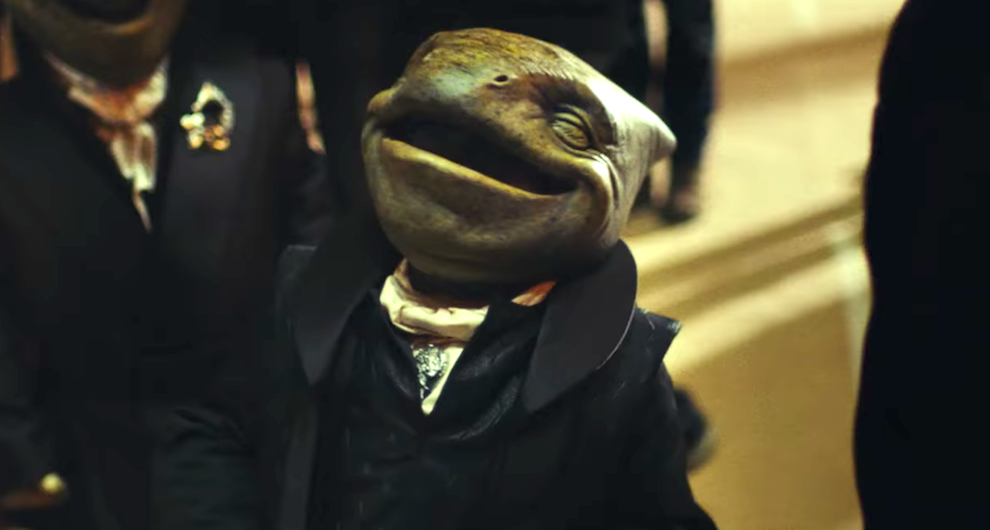 A long time ago in a galaxy far, far away… Warwick Davis famously played Wicket the Ewok in Return of the Jedi. In the years since, the veteran actor has appeared throughout the Star Wars saga in a variety of small roles, at times disguised beneath heavy prosthetic makeup, which can make his cameos particularly difficult to spot.

In The Last Jedi he plays Wodibin, a flat-nosed alien with an aptitude for gambling his ill-gotten gains in the Canto Bight casino. 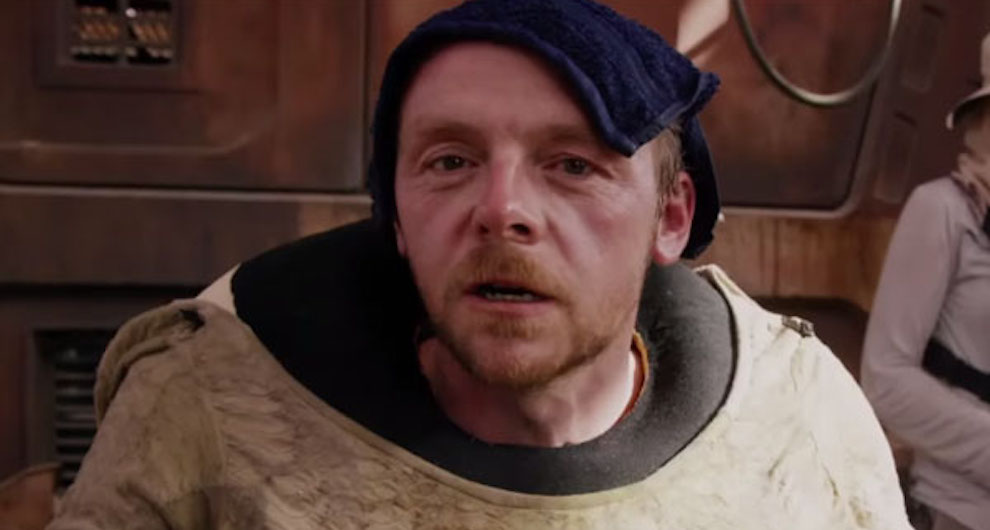 After scoring a reasonable amount of screen time in The Force Awakens, it’s safe to say that Simon Pegg earned more than a one-quarter portion for his part in the franchise. The British actor, who plays Scotty in the rebooted Star Trek movies, joined forces with J.J. Abrams once again for this latest sci-fi stint.

Hidden beneath layers of padding, latex, and CG, Simon Pegg takes on the dastardly role of Unkar Plutt, the junkboss of Jakku, who offers measly food rations in exchange for scavengers’ most valuable goods. 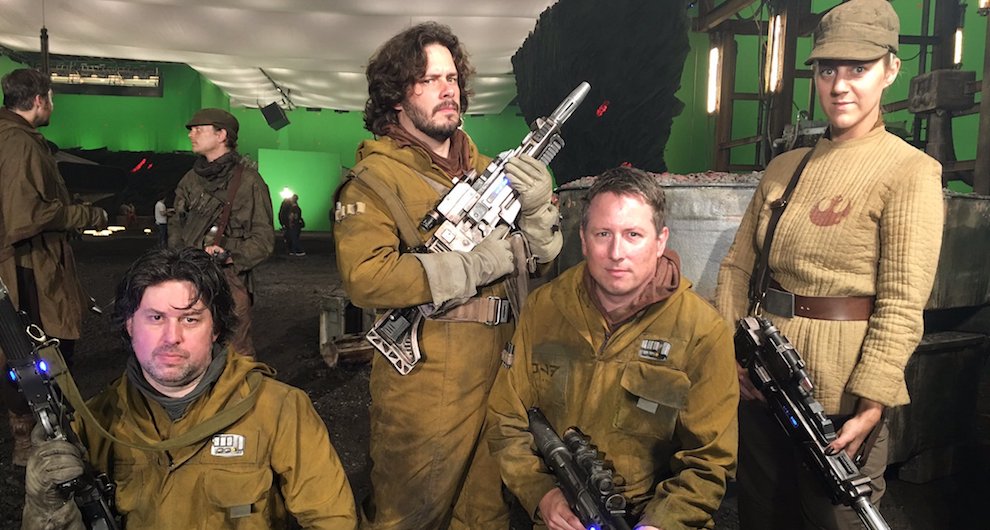 You may need a pair of Maz Kanata’s variable-lens corrective goggles to spot this particular cameo, but rest assured, Edgar Wright makes an appearance in Rian Johnson’s Star Wars sequel. After confirming his surprise part on social media, it seems that the Baby Driver director donned a “grubby Resistance costume” alongside his older brother, Oscar, and Attack the Block collaborators, Joe Cornish and Leo Thompson.

Admittedly, you would have to look hard for Edgar Wright and his band of soldiers, as the “rebel scum with a gun” previously told The Guardian that he shows up in a “three-second shot.” 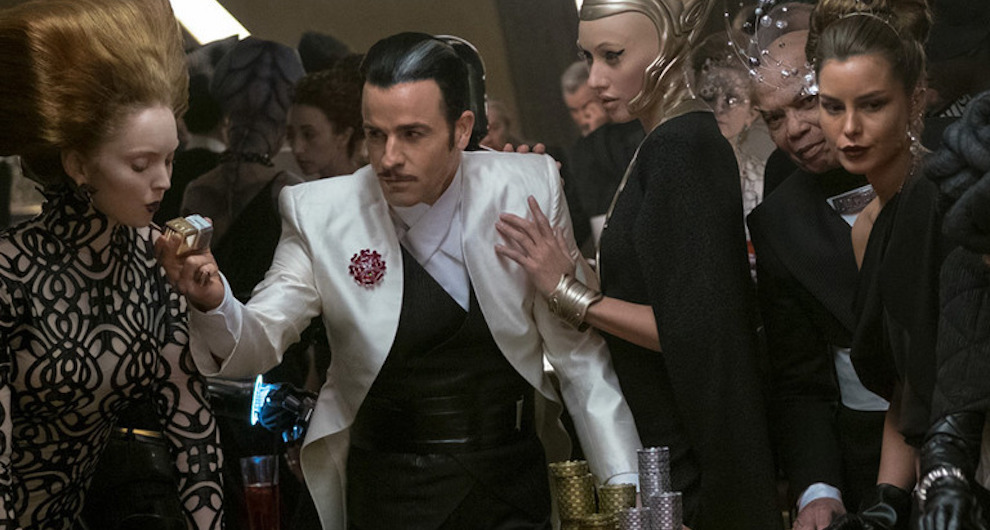 If you were to take an ill-timed popcorn replenishment break during the eighth installment of the iconic sci-fi saga, there is a strong chance that you could miss one of the biggest surprise appearances of the movie. During a scene inside the Canto Bight casino, Justin Theroux makes his cameo as the Master Codebreaker, wearing a dazzling white tuxedo with a red plom bloom brooch pinned to the lapel of his coat.

Despite their best efforts, Finn and Rose fail to succeed in their mission to enlist his help, as the expert slicer reveals that he is far more interested in trying to pick up women while simultaneously gambling away his fortune. We suppose you win some, you lose some! 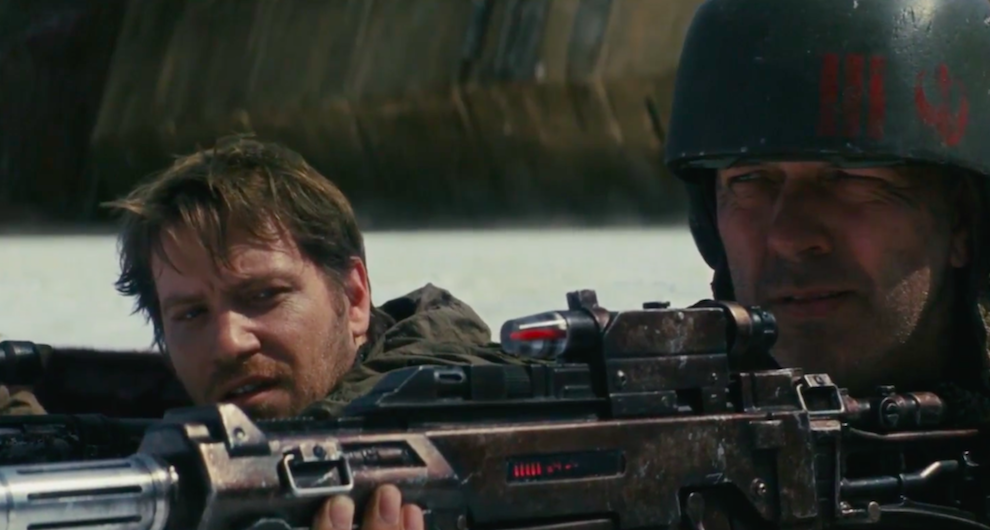 Eagle-eyed Star Wars fans may have noticed Gareth Edwards’ sneaky cameo in The Last Jedi’s climatic battle on the salt-covered planet Crait. The Rogue One director turns up as a Resistance soldier preparing for an impending attack from the First Order. In the trenches, he stands to the left of the trooper who realizes that the surface of the mineral planet is dusted with a layer of white salt.

At least Gareth Edwards won’t have been left with a bitter taste in his mouth though, as this serves as the ultimate repayment from Rian Johnson, who previously earned himself a brief cameo as an Imperial Technician in 2016’s Rogue One. 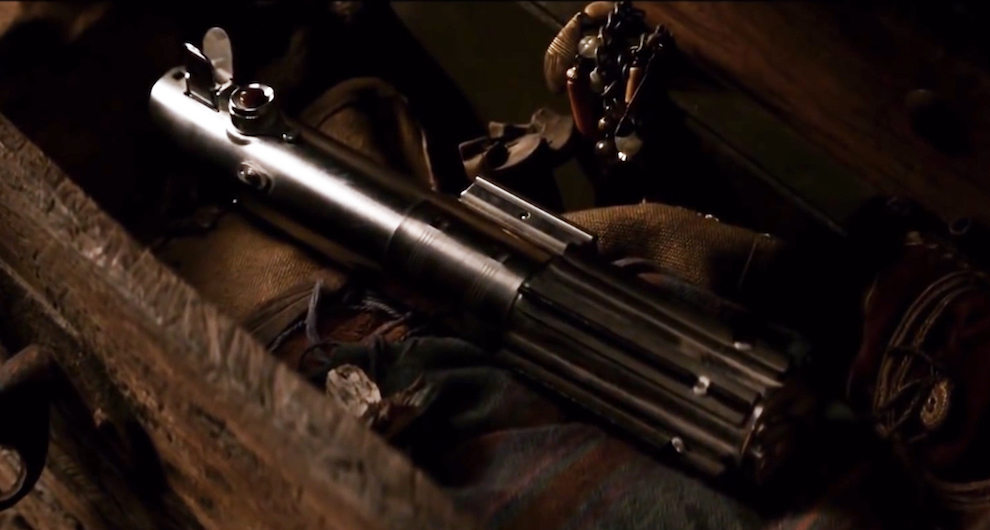 When we discovered that Ewan McGregor was set to return to the Star Wars franchise, we had a very good feeling about it, though it transpired to be nothing more than a fleeting voice cameo.

The Scottish actor’s dialogue can be heard during a flashback sequence that takes place from the basement of Maz Kanata’s castle in The Force Awakens. Immediately after Rey touches Luke Skywalker’s long-lost lightsaber, she is transported back to a past time where the voice of Obi-Wan Kenobi whispers her name. 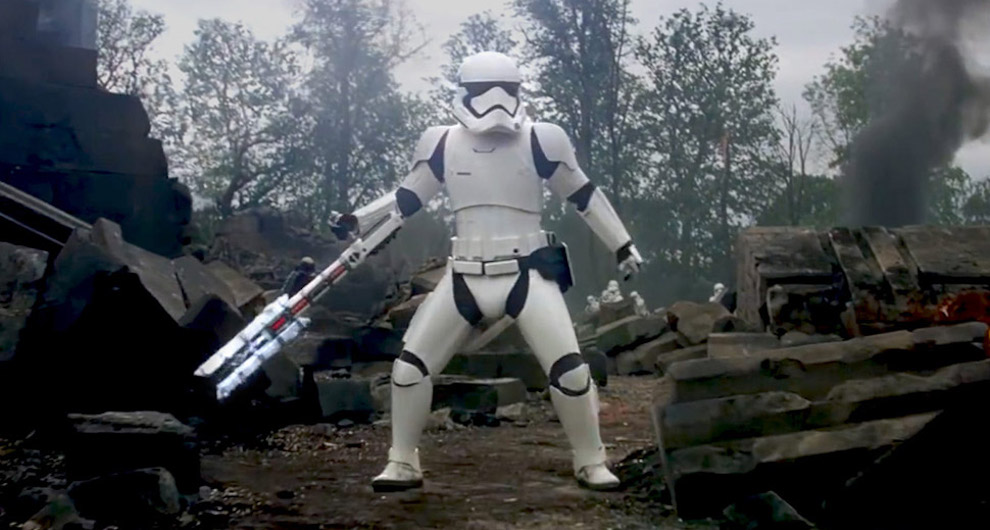 Writer-director Kevin Smith, who is known for dropping Star Wars references into the majority of his quirky flicks, switched things up as he dropped his own line of dialogue into The Force Awakens.

In the seventh installment of the blockbuster series, the fan-of-all-trades recorded his voice for one of the stormtroopers who attacks Maz Kanata’s castle during the First Order assault. Shortly after the Resistance fighters arrive on the scene, he can be heard yelling, “We have incoming at 28.6! Move!” The Force is strong with fanboys… 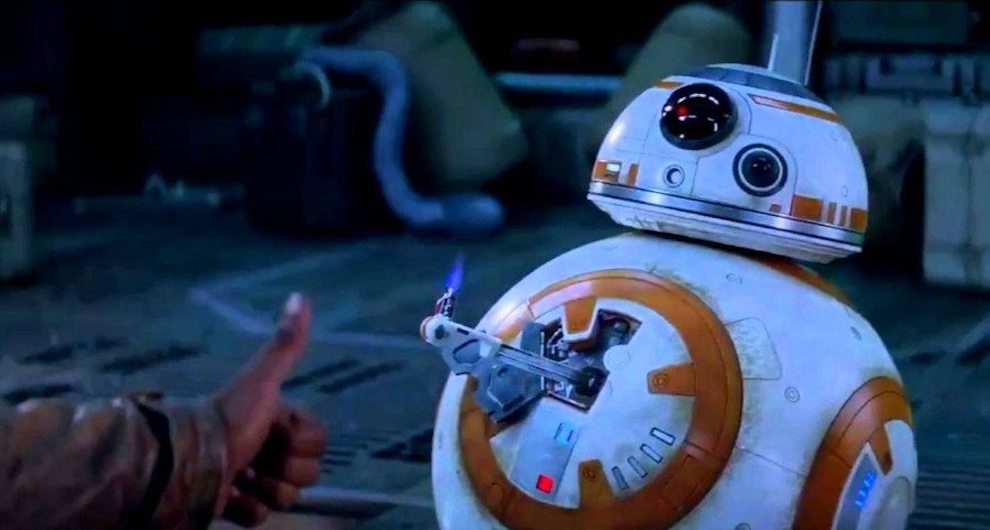 Bill Hader became the droid that everyone was looking for (or in this case, listening for) in The Force Awakens as the Saturday Night Live alum worked as a voice consultant for the inquisitive and adorable BB-8 droid alongside Ben Schwartz, of Parks and Recreation fame.

In an interview with Hitfix, the comedian explained the process, revealing that he was hooked up to a talk box in the recording booth while J.J. Abrams played around with a “sound effects app on his iPad” in order to create the language of beeps and whistles that BB-8 famously communicates with.

Did you catch any other celebrity cameos across the Star Wars galaxy?  Who else do you think might pop up in Episode IX?

Let Your Geek Sideshow and tell us your thoughts in the comments below!