She-Hulk is here to smash her way into our hearts! “A Normal Amount of Rage” is witty, unadulterated fun. The fourth wall breaks give me Fleabag vibes, and I’m perfectly fine with that. It doesn’t feel inundated with MCU references or cameos that detract from the main character. Jennifer Walters is wholly capable of standing (and smashing) on her own.

I sincerely hope folks will seek out more of Tatiana Maslany’s work. “A Normal Amount of Rage” allows her to stretch her comedic wings, and she’s a natural. She deserved an Emmy for every single clone she portrayed on Orphan Black for every year the show was on the air. So, she should have 55 Emmys by now. I don’t make the rules.

Getting Us Up to Speed

We open with Jennifer Walters practicing her closing remarks for her current case in front of her best friend, Nikki Ramos, a paralegal, and Dennis Bukowski, another lawyer. Dennis is a hater, but Nikki is Team Jen, wholeheartedly believing she’ll crush it. If she needs to Hulk out (in a lawyer manner, of course), then so be it.

Before Jen leaves her office for the courtroom, she turns to the camera, breaking the fourth wall. Jen reveals she’s a Hulk, which all started during a trip with her cousin Bruce a few months ago (yes, that Bruce)…

A Bloody (and Green) Crash

We flashback to a few months ago, as Jen and Bruce Banner drive down an empty road. Bruce reveals he invented an inhibitor that maintains his human form. This invention explains why Bruce wasn’t the Hulk in the mid-credit scene for Shang-Chi and the Legend of the Ten Rings. Jen introduces her theory that Steve Rogers, AKA America’s Ass, died a virgin.

Suddenly, a vessel from Sakaar appears abruptly, causing Jen to veer her car off the road. After the vehicle takes a nasty tumble off a cliff, Jen emerges from the wreckage relatively unscathed, save for a gruesome gash on her forearm. She pulls Bruce out of the smashed car. Bruce emphatically warns her to steer clear because he’s bleeding, but it’s too late — Bruce’s blood enters Jen’s body via the wound on her arm.

Jen transforms instantly into She-Hulk, with Bruce morphing into the Hulk shortly after that. Jen makes a beeline for the woods.

Jen wakes up later that night on the ground, caked in dirt, human blood, and … Hulk blood? There’s a green substance on the collar of her blouse. She spots what appears to be the Sakaar ship that caused the car crash as it hovers in the sky before zipping out of view.

Later, Jen wanders barefoot into a nearby bar. Fun fact: There’s a QR code on the left side of the wall. If you scan it, you’ll receive an issue of The Savage She-Hulk #1. Jen sneaks into the bathroom to wash up, but a horde of gal pals swoop in to inquire about her situation. They assume Jen’s appearance is the result of partner mistreatment. They quickly apply makeup to her face, give her new garments to wear, allow her to call Bruce on one of their phones, and send Jen on her way. Strangely, they’re like the guardian angels of the bar circuit.

While waiting for Bruce outside, a couple of men brazenly approach Jen. She tries to evade them, but they’re relentless in their pursuit. (Ugh, this is giving me war flashbacks to pre-pandemic times at bars.) Reaching her tipping point, Jen Hulks out, scaring the pants off those dudes. That’s what you get!

Waking Up in Paradise

Later, Jen wakes (again) in Bruce’s beachside hideout in Mexico. She finds clothes next to her bed and explores her surroundings. Jen spots a smashed Iron Man helmet hailing from the Iron Legion in Avengers: Age of Ultron. Aw, Bruce kept this in remembrance of his fallen friend.

Jen discovers her cuz in a basement lab in full-on Smart Hulk mode. Since Jen is foggy on the details, he reminds her of the crash and how his blood contaminated her wound. Bruce also reveals Tony Stark built this place for him and he spent time there during the Blip, integrating his Hulk-Banner identities.

He confirms the spaceship they crashed into was a Sakaaran Class A Courier Craft. Bruce believes it was trying to deliver a message. Hmm. Could the Grandmaster be involved? Is World War Hulk on the horizon? Given that he spent two years on Sakaar, where we found him in Thor: Ragnarok — I’m getting ahead of myself. Anyway…

Let’s Get Down to Business

To embrace our Hulk-ness! Jen’s blood sugar crashes, so Bruce makes her pancakes. He explains how long it took him to master his Hulk. He procures a hefty binder chock full of secrets for cracking the green code. However, Jen doesn’t want to study under Bruce’s tutelage for 15 years. She has a life in LA and a badass career into which she poured her blood, sweat, and tears.

Next, Bruce places Jen in a chamber with a helmet. His objective is to measure what triggers her transformations. He suspects it’s anger and fear. Jen quips that anger and fear are the baselines for being a woman. I felt that line in my bones. Bruce urges her to consider the repercussions that accompany having nearly limitless strength. With great power comes great — yeah, you get it.

Bruce puts Jen’s reflexes to the test. The blades in the chamber move toward her with unnerving speed. Jen’s helmet falls off, becoming scrap metal to the spinning blades. Before she turns into minced meat, Jen morphs into She-Hulk, stopping the blades in their tracks. She storms out of the chamber, lodging the door to said chamber in the adjacent wall with ease.

Nobody’s Taking the Wheel But Jen

Bruce turns green with envy when he discovers that Jen’s the only one at the wheel. There’s no “big guy” controlling her. Jen also seems to transition from She-Hulk to her human form seamlessly. Jen is about to bid her cousin farewell, feeling she doesn’t require his training, but Bruce believes there are still things he can teach her about being a Hulk.

Jen and Bruce incorporate strength training and physical exercise into the latter’s Hulk syllabus. Jen bests him in a few areas, from flexibility to throwing rocks. That is until Bruce shoves her off a cliff in a “dick move.” Side note: Is this the first Marvel property where we see someone flip the bird?

That evening, Bruce shows Jen the fun side of being a Hulk: drinking the bar dry. Thankfully, they possess an immensely high tolerance for alcohol, so they can imbibe a ton without getting blackout drunk. Unfortunately, there’s still the human hangover to contend with in the morning.

Bruce and Jen try meditating after their night of drinking. Bruce encourages Jen to keep her anger in check, as any outburst can culminate in danger and, even worse, death. Jen reminds Bruce that, as a woman, she’s used to tempering her anger and fear. Whether getting catcalled on the street or being on the receiving end of mansplaining, women know how to mold and shape themselves to blend seamlessly into a man’s world.

Good grief, this scene hit close to home. Women are no strangers to controlling their emotions as a form of protection.

Amid Jen’s impassioned monologue, she briefly morphs into She-Hulk, but as she stands up, she’s Jen again. Jen thanks Bruce for sharing what he knows. However, it’s time to go home. 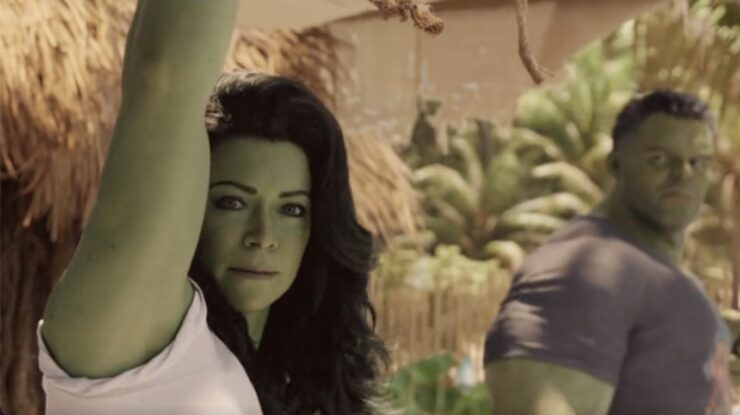 Bruce tries to persuade Jen to stay longer. There’s still so much he needs to teach her. Yet Jen does not desire to be an Avenger like Bruce or any super hero. She only wants to be a lawyer and live a normal life. Bruce impedes her from driving away, resulting in an all-out brawl between the two cousins. Have you ever watched two Hulks fight each other? Neither have I.

After the pair inadvertently destroy Bruce’s bar, the fight comes to a screeching halt. Jen helps him repair it; then, she carves her initials into the bar, next to Tony and Bruce’s initials. Bruce claims he understands why Jen doesn’t want to channel her Hulk abilities into saving the world. “No, he doesn’t,” Jen says to the camera. Funnily enough, Bruce looks at Jen and glances in the same direction as her. I want to think fourth-wall-breaking is an innate Hulk power.

Back to the Courtroom

So now, we’re back in the present, and Jen is preparing to deliver her closing remarks. Nikki and Dennis sit next to her. Suddenly, Titania bursts through the courtroom wall, causing mayhem among the masses. Nikki encourages Jen to transform into She-Hulk. Jen doesn’t wish to ruin another bangin’ outfit, but she obliges. Everyone gawks at Jen’s appearance. After introducing herself to Titania, she lugs a desk at the latter. Titania retaliates with a flying kick. However, Jen punches Titania across the room, knocking her unconscious. 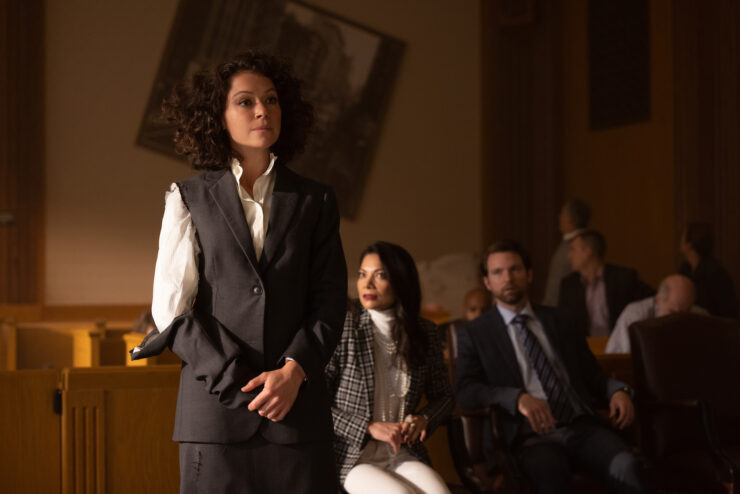 As security guards cart Titania away, Nikki places Jen’s heels on the floor. Jen, now human, puts them back on. With her hair disheveled and her clothes torn in multiple places, Jen states she’s ready to dole out her closing argument to the jury. This moment made me giggle.

Jen and Bruce are drinking themselves into a Hulk-ified stupor. Well, Jen’s in human form, while Bruce is Smart Hulk. Jen laments the possibility of Steve Rogers dying a virgin. Bruce finally clears the air — Steve lost his virginity in 1943 during a USO Tour. Could it be the blonde woman he met in Captain America: The First Avenger? Laura Haddock is credited as “Autograph Seeker” on IMDb. In Guardians of the Galaxy, she also portrays Peter Quill’s mother, Meredith Quill. Hmm…

Elated, Jen raises a fist to the sky and screams, “Captain America F–” before the screen cuts to black. You know where she’s going with that.

As much as I loved this entry into the MCU, I have two complaints. One, the episode is too short. I wish Jen’s training session with Bruce was the entire pilot. After all, there are nine episodes. Let the story breathe a bit. Secondly, this ties in with the first gripe, but the Titania scene was too short. I would’ve liked to hear Jameela Jamil say more than five words.

Perhaps showrunner/writer Jessica Gao intended to make the scene confusing for viewers, replicating the feelings of those witnessing Titania and She-Hulk’s first scuffle.

Overall, I’m excited to see where She-Hulk takes us. Its snappy comedy, whimsy, and abundance of Tatiana Maslany will keep me tuning in every week. Long live Jennifer Walters.

Join the conversation alongside other She-Hulk fans in the Let Your Spoiler Sideshow Facebook Group, and don’t forget to Let Your Geek Sideshow!

Nostalgic Cartoons to Help You Revisit Your Childhood