She-Hulk fans, it’s hard to believe we’re now at episode 5 of Marvel’s latest live-action series. The insistent manbabies and diligent internet trolls continue to review bomb this delightfully whimsical, self-referential, and sharply funny series, but I won’t let that stop me from watching it. Some folks should remove the sticks from their bums and enjoy Marvel’s first sitcom. That’s right. It’s not marketed as anything but that.

Jen’s fourth-wall breaks make for a refreshing departure from Marvel’s cookie-cutter formula, while Tatiana Maslany is a comedic force. All hail the Comedy Green Queen. Plus, there are plenty of Easter eggs and intricate MCU details for fans to find in She-Hulk episode 5, titled “Mean, Green, and Straight Poured into These Jeans.” 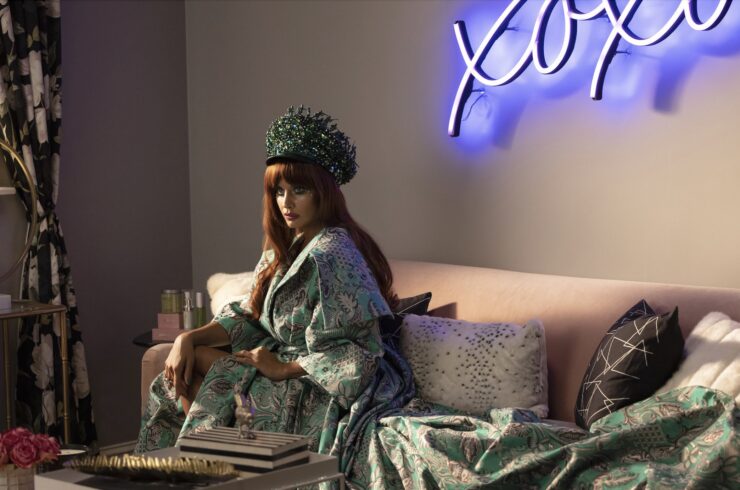 We open with Jennifer watching an ad for Titania’s “She-Hulk” beauty and wellness products. Baffled that this stranger would steal her identity and then sue her for trademark infringement, Jen merely … goes about her day. While driving, Jen spots a massive billboard in front of the Chateau Marmont (Fun fact: my therapist’s office used to be in that area — that’s LA for ya) featuring Titania’s She-Hulk line, along with news of a pop-up at The Grove, a shopping center.

Later, Jen’s eating in her apartment when her cousin Ched barges in with packages for her. Well, they’re all from Titania’s beauty line. Jen explains to him that her now-sworn enemy has trademarked the “She-Hulk” name first. Ched, a scholar, explains in layman’s terms how trademarks work. Thank you, Ched, for your service.

Popping Up at the Pop-Up 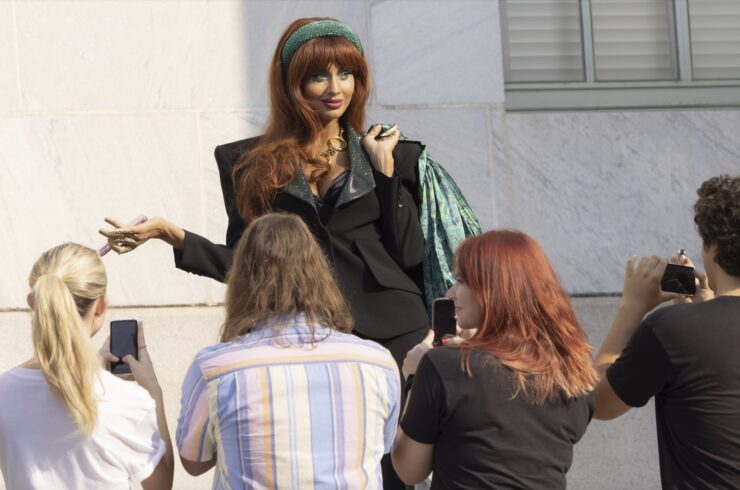 Next, Nikki and Jen visit Titania’s pop-up store at The Grove. Jen confronts Titania herself in the autograph line, demanding the latter stop using her name to sell products. Titania gives Jen the business before asking her to take a photo of her and a fan. It’s all for the fans, remember?

The following day, Jen vents her frustrations to Nikki, thinly veiling them as nonchalant remarks. “She-Hulk is just a thing that happened to me,” Jen says, while Nikki knows her BFF is genuinely upset — especially when Jen starts rattling off the perks of being She-Hulk. That last one made me envious. What’s it like to safely walk home at night while wearing headphones? For now, I shall live vicariously through Jen Walters.

The Exchange of Favors

Pug waltzes up to Nikki’s desk with a favor. The Iron Man Threes are coming out, so he wants someone to stand in line with him for the exclusive sneaker drop. Said shoes are also limited to one pair per customer and he needs “one to rock and one to stock.” Nikki agrees, but she has her own request in return. She asks for Pug’s help in getting his “drip broker,” Alonzo, to design clothes for Jen. Nikki’s tired of seeing Jen don the same suit in She-Hulk form.

Nikki persuades Pug to follow through on his favor first since she’s kindly knocking off interest for him. Slick Nik is at it again! 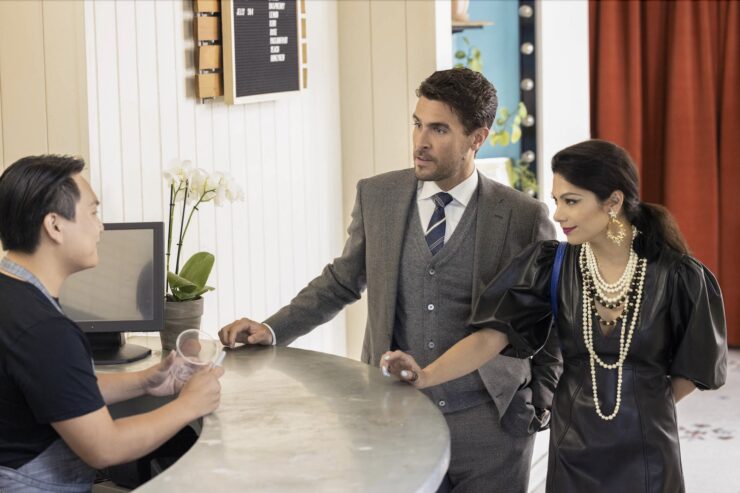 Nikki and Pug arrive at the location where Alonzo purportedly operates — a boba tea establishment. The only employee working allows them into the backroom after they pass the test (they declare they’re not cops). Note: If you look on the wall when Pug and Nikki enter the cafe, you’ll find a QR code taking you to a free copy of She-Hulk Vol 1 #10. Unfortunately, what Pug and Nikki find in the backroom is nothing short of knockoffs. Hey, imitation is the highest form of flattery, right?

The cafe worker showcases his merchandise, including Captain America’s shield, Mjolnir, boxer briefs, T-shirts, mugs, fanny packs, hats, and what appears to be a towel with an animated Tom Selleck-looking Hulk donning a rather revealing swimsuit. Oh, and all the merch either says “The Avongers” or “The Avingers.”

Notice how the mugs say “Thur” instead of Thor, “Holk” instead of “Hulk,” etc. Copyright laws are tricky, folks.

Unsatisfied (but still willing to purchase some Avongers swag), Nikki and Pug ask the Café Beau-Ba employee/backroom entrepreneur if they can find someone designing clothes for superpowered/Hulk-like folks. He mentions his boss Luke Jacobson.

That’s a deep-cut Marvel comics cameo — Luke Jacobson is a famous designer who comes under the protection of Dakota North, a freelance private investigator. Dakota interacts with characters like Spider-Man, works for Matt Murdock and Foggy Nelson’s firm, and is hired by the Black Panther. Anyway…

Into the Luke’s (and the Mallory’s) Den

Clad in Avongers swag, Nikki and Pug attempt to contact Luke Jacobson. The famed designer watches them via his security cameras and refuses to admit them. That is, until they mention Jen’s an Avenger. Okay, so maybe she’s not there yet, but it gets them an audience with Luke.

Meanwhile, Holliway calls Jen into his office after catching wind of Titania’s frivolous lawsuit. Instead of Jen representing herself in court, Holliway brings Mallory Book into the fold. Fun fact: Mallory is in the comics, igniting an intense rivalry with Jen before eventually becoming the latter’s boss.

Mallory asks why Jen never thought to trademark her name. Jen references Doctor Strange and Thor and how they never sought to do that. Mallory counters that Jen listed examples of heroes who use their real names. Mallory suggests they countersue. She also urges Jen to change up her wardrobe. The face that never lost a case is, well, on the case!

The first day of the Jen vs. Titania trial unfurls with Titania’s lawyer claiming his client’s cosmetics line was created above board in terms of trademarking. Mallory shoots back that the public unanimously decided Jen is She-Hulk. Titania’s attorney plays a clip of Jen claiming she’ll never accept a name as reductive and “gross” as She-Hulk, but Mallory fires back with another clip of a news anchor asking Jen how she came up with She-Hulk.

Thus, the judge asks Mallory to unearth proof that Jen consistently accepted and used the She-Hulk moniker. The best line from this scene is, undoubtedly, “Nice suit, Shrek.” Hats off to Titania for that one.

Luke Jacobson: Designer for the Heroes

Luke finally meets Jen and doesn’t seem convinced she’s an Avenger. Admittedly, I had my eyes glued to the background in search of Easter eggs. I did see what looks like a Maleficent-esque headpiece, but that could be nothing. Anyway, after Jen demonstrates her ability to switch from human to She-Hulk seamlessly, Luke takes her on as a client. Huzzah!

Side note: the moment when Luke rests his hand on a superhero suit with pronounced nipples feels like a poke at Batman Forever’s puzzling costumes. Why were Robin’s nipples extra pointy? We may never know. 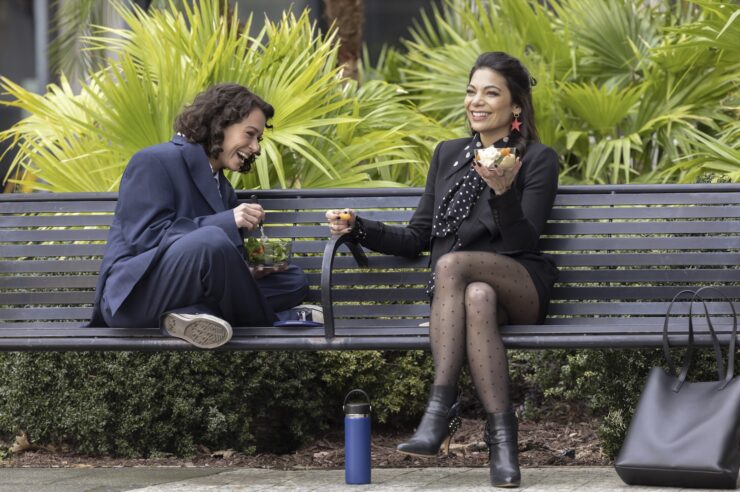 At the office, Jen and Nikki run into Todd, one of Jen’s failed dates. Mallory is his lawyer, hence his presence. He asks Jen out on another date, which she inexplicably accepts, despite her revulsion toward him.

While having lunch, a lightbulb switches on in Jen’s head — why not use her dating history as evidence for consistent acknowledgment of She-Hulk as her identity? Her dates can corroborate her claims and serve as witnesses for the trial.

Later, Mallory shows the court pictures of Jen’s dating profile, wherein she presents herself as She-Hulk. We hear from her dates, including the cute guy with whom she had a one-night stand. He was attracted to She-Hulk, but not Jen in human form. Thankfully, the judge rules in Jen’s favor, ordering Titania to cease selling products under “She-Hulk.” Before departing in her usual dramatic flair, Titania vows this isn’t over. Success!

Jen takes her new bestie Mallory out for drinks to celebrate winning the trademark infringement case. Mallory commends Jen for publicly embarrassing herself by putting her dating history on display. She also feels Jen can do better in that department. Hear, hear! Jen’s a freaking super hero, for crying out loud. Yet these fools believe they can do better? They might raise the bar regarding their standards, but She-Hulk can easily lift that bar and break it in half.

Know your worth, Jen!

The Clothes Make the Woman

Jen returns to Luke Jacobson’s studio to retrieve her new suits. Luke claims he added some unique features to said suits, which, unfortunately, we don’t get to see in action after Jen enters the fitting room. While Jen’s trying on her clothes, Luke finds a hat box on the counter. He moves it to a chair next to a rack of suits. One bag is open, revealing a familiar-looking suit with burgundy and gold tones. In the hat box? None other than Daredevil’s now-yellow helmet. The label on both the hat box and the burgundy suit says, “For: Pick Up.”

If that helmet reveal didn’t excite you, I don’t know what else will. While Spider-Man: No Way Home marked Matt Murdock’s introduction into the MCU proper, She-Hulk will bring Daredevil into the fold for the first time since his Netflix series ended. I can’t wait to see Matt interact with Jennifer. Well, it’ll probably be She-Hulk and Daredevil, but still.

Overall, She-Hulk‘s fifth episode introduces new characters from the comic world, boasts as many fun gags and witty one-liners as its predecessors, and empowers Jen Walters to never settle for anything less than the best. In addition, we get to see more of Titania (with the hilarious Jameela Jamil), and the episode explores the theme of identity from a lighthearted standpoint. I’m content.

However, that contentment will quickly morph into discontentment if someone doesn’t give Madisynn and Wongers their own show. Make it happen, Marvel!

Join the conversation alongside other She-Hulk fans in the Let Your Spoiler Sideshow Facebook Group, and don’t forget to Let Your Geek Sideshow!

What Were All the Super Hero Shoes in She-Hulk?