Susan and Kitty have crossed the Spider-Verse to discuss one of the ultimate modern additions to the Marvel Universe. While he shares the mantle of Spider-Man, this character has forged his own path to becoming an Avenger, a Champion, and overall, a hero- It’s Miles Morales: Spider-Man Then & Now! 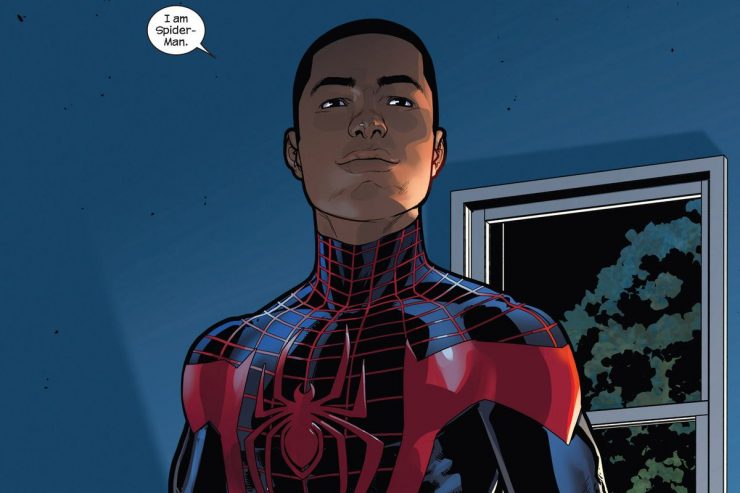 Today, we’re swinging across the Spider-Verse to talk about one of the ultimate additions to the Marvel Universe of recent years. From taking on the mantle of a fallen hero to forging his own path, this web warrior is about to hit the big screen in his very first feature film this December. This web-slinger brings the Spider-Man name back to its teenage roots with a whole new perspective.

Created by Brian Michael Bendis in 2011, Miles Morales became the Spider-Man of Earth-1610, better known as Marvel’s “Ultimates” brand.  After a fateful spider bite of his own, he became inspired to be a hero in the wake of Peter Parker’s death in his universe.  As the Ultimate Spider-Man, Miles remained isolated from the main Marvel universe (Earth-616) until 2015’s cataclysmic Secret Wars event.

Following the Ultimate End miniseries, Miles Morales became a part of the main continuity, and had to navigate all the challenges of leaving one universe and lifetime behind.  Since then, he’s become an Avenger and a prominent member of the Champions team of teenage heroes, learning to define his own identity as Spider-Man and so much more.

From looking up to heroes to becoming one himself, Miles Morales has evolved into one of Marvel’s brightest new stars. His experiences prove that anyone has what it takes to make a difference, and that others can’t define your own personal path to heroism. Though he shares the name of Spider-Man with others, he stands as his own symbol of bravery, strength, and responsibility in every universe.

Learn more about the origin of Miles’s spider bite as we track the web of the Spider-Verse, or get to know Miles and his fellow Champions in the Modern Marvel Heroes breakdown.

If you are interested in following Miles Morales across the Spider-Verse be sure to check out the following sources: