This week, a message arrived from a galaxy far, far away when Star Wars congratulated Marvel on having the biggest opening weekend in history with the release of Avengers: Infinity War.  Posted from the official Star Wars Twitter account, the image shows Rey handing a lightsaber to Iron Man’s outstretched hand. 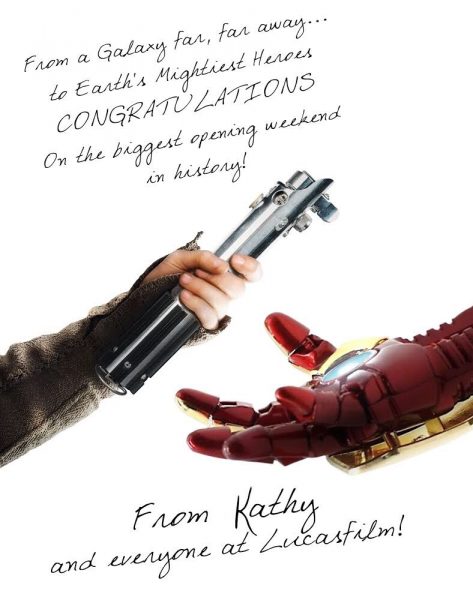 This isn’t the first instance of major film companies congratulating others for major movie milestones.  Marvel had a similar message for Jurassic World when the dinosaur film overtook the Avengers’ gross earnings to become the 4th highest in the world.

We love seeing this celebration of fandoms when it comes to incredible cinematic achievements!  Plus, now we are wondering what Tony Stark would do with his very own lightsaber.

What do you think of Avengers: Infinity War’s massive success?  Let Your Geek Sideshow and tell us in the comments!

Geek Headlines- Ant-Man and The Wasp Trailer, The Walking Dead Season 9, and More!