Star Wars: Who Are the Knights of Ren? Names and Profiles Revealed

Star Wars fans were first introduced to the Knights of Ren in The Force Awakens when Kylo Ren’s cloaked crew made a cameo appearance in Rey’s flurry of visions at Maz Kanata’s Castle, leaving both the Jakku scavenger and the audience mystified by their presence.

The group of elite enforcers made a further fleeting appearance last year, in The Rise of Skywalker, though unfortunately, not many more details were revealed about the troop besides their devotion to Emperor Palpatine, who was revealed to be a key player in the saga’s decades-long chess game.

The Knights’ comprehensive character profiles provide backstories while simultaneously sharing details about each individual’s abilities, weapons, and traits. So join us, as we uncover the truth about some of the most formidable foes to have plagued the galaxy far, far away. Vicrul sees himself as the harvester, the reaper of the fallen, and the targeter of souls; he is one of the most Force-sensitive Knights out of Ren’s enclave of masked warriors. His latent Force powers give him heightened reflexes in battle, making him a master of the martial arts and an expert with his scythe blade, though he also wields a blaster pistol in case of emergency.

Importantly, Vicrul possesses the power to weaken his opponents mentally and emotionally before striking out with his weaponry, as he uses the Force to invoke fear in his prey, though these abilities are not as fine-tuned as his physical skills. Still, he is a significant threat, as he grows stronger in the Dark Side with each hateful attack that he thrusts upon his victims. 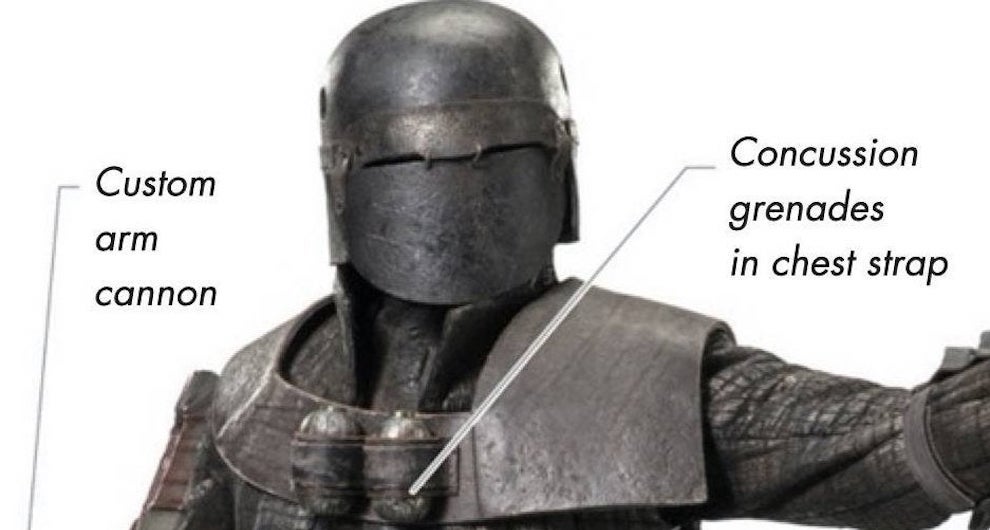 Cardo has an obsession with weapons and weapon modifications, making him the official armorer of the Knights of Ren. He leaves a path of destruction behind him wherever he goes, using his hefty arm-cannon to blast out bullets like a fire hose. He might not be as precise with his aim as the other Knights but his relentless assaults cause swathes of devastation.

Cardo is the most heavily armed member of the Knights. His primary weapon is his custom arm cannon, which incorporates three weapons into one. The singular vessel is packed with a flamethrower loaded with naphthex gel, a plasma bolt launcher that fires explosive charges up to a 200-meter range, and a rapid-fire laser blaster that shoots in quick, successive bursts. Ushar is the Knight who is most likely to force prisoners to plead for mercy, as he employs torturous techniques and tactics to really test the mettle of his victims. As part of his sinister approach, he assesses the appropriate punishment for his preys based on their response to his torment, as he believes that this determines the penalty that they deserve to receive.

Ushar extends the suffering of the victims that whimper in the face of pain, as he views it as a sign of weakness, while those who display courage and fight back will be granted a swift death. His weapon of choice is a war club that produces a widely dispersed concussion blast to take out his targets, whether he respects them or not. Trudgen is a powerful individual with a twisted sense of pride, as he likes to collect trophies from his fallen conquests, adding the weapons and armors from his past victories to his inventory. He uses some of his killer keepsakes to modify his own equipment and uniform. For instance, his helmet incorporates elements from a Death Trooper, which indicates that he once defeated one.

When not making these wardrobe changes, Trudgen strides around with his enormous vibrocleaver. His signature weapon is equipped with ultrasonic technology that makes the steel blade rapidly vibrate, giving it extra cutting power to cause maximum destruction. He typically rests the weapon over his shoulder or slings it over his back, ready to strike out at any given moment. 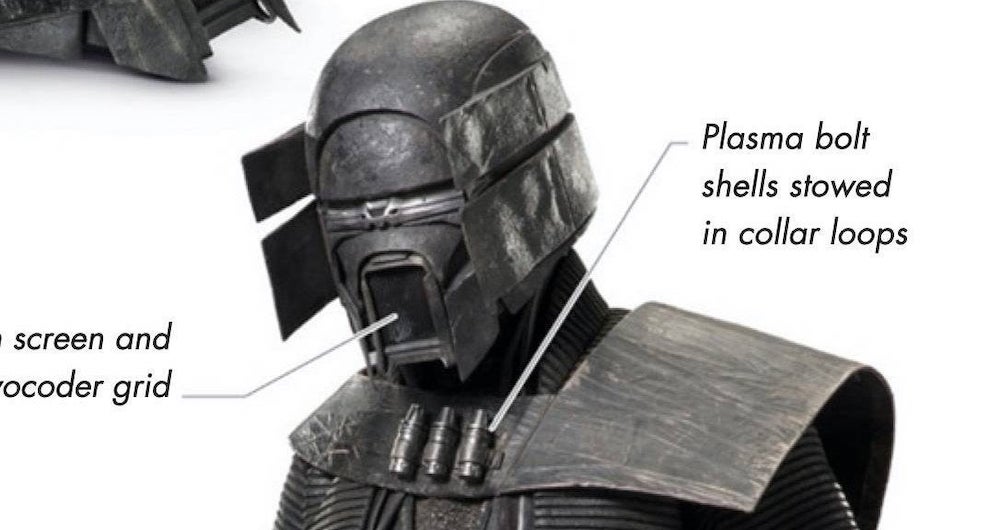 As the most solitary of the Knights, Kuruk is the perfect candidate to work solo as the group’s sniper, as well as being the pilot of their ship, the Night Buzzard. He is also the most likely to stay behind and cover assaults in battle situations, as he is a sharpshooter with a keen eye who can take out enemies from a distance while perched at a high vantage point.

Like Cardo, Kuruk’s signature weapon is not a blade but rather a custom-designed rifle with multiple barrels that allow for rapid-fire shooting, precision-style sniping, and pump-action firing, which is designed to shoot plasma bolts. Moreover, the blinder flaps on his helmet help him to focus on his target and sharpen his aim, meaning he is well equipped for any fight.

Ap’lek is a sadistic character that takes a very different approach to the other Knights when it comes to combat, favoring deception and trickery over straightforward violence. He is a master strategist who likes to plan his attacks, as he uses stealth and misdirection to lure and trap his opponents before striking out at them.

Ap’lek’s preferred lethal weapon is an ancient Mandalorian executioner’s axe, which features an ultrasonic vibroblade made from beskar alloy. He also carries a smoke dispenser on his belt that triggers a smokescreen to obscure the vision and disrupt the senses of those in his vicinity. His latent Force abilities allow him to peer through these obstacles to eliminate targets.

Which Knights of Ren warrior would you want on your team? Who do you think is the most menacing mercenary? Let Your Geek Sideshow and tell us in the comments!