Without its villains, Star Wars™ wouldn’t be Star Wars. The clash between good and evil, intertwined with every other mythic theme, is the key element to the whole saga.

Baddies like Darth Vader, Maul, Sidious, Kylo Ren, and all the others make the series entertaining enough to keep us coming back for more. Some villains are lesser known, at least by the general populace. Super fans, however, will know all about the villains featured in comics, games, and animations. One of the coolest of these is Grand Admiral Thrawn, introduced in the Thrawn Trilogy of novels in the 1990’s.

His first canon appearance was in the Rebels TV series. With his distinctive look, sophisticated personality, and irrepressible attitude, he constantly stole the show from the heroes, enough for him to be featured in other media over the years. He became so popular with fans that he was even referenced in Season 2 of The Mandalorian™. The spinoffs of that show – at least AHSOKA – may include Thrawn as a live-action character. We don’t know who might portray him yet, but we’re sure we’ll love the incarnation one way or the other. He’s simply a great villain.

Let’s delve into the history of Grand Admiral Thrawn. 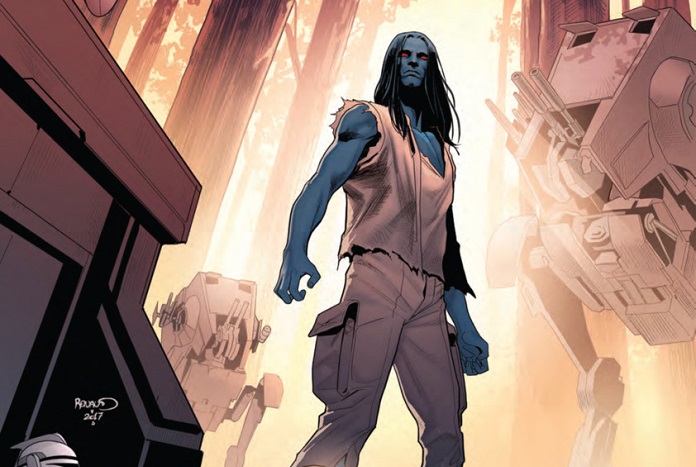 Thrawn in his self-imposed exile.

A member of the Chiss species from the planet Rentor of the Unknown Regions, Thrawn was named Kivu’raw’nuru at birth. He also went by Vurawn among his own people, but the central part of his full name is what the rest of the galaxy ended up calling him (always with fear). He became renowned for helping the Chiss fend off pirate attacks and conspiracies. Though some of the females of his race, including his sister, were Force-sensitive in their youth, Thrawn was not. But even without mystical powers, he was still a force to be reckoned with all his own.

Thrawn was thrust into a military lifestyle almost from the get-go. He fought within the Chiss Ascendancy for years before being recruited into the Imperial Navy. Ironically, after the fall of the Republic, Thrawn was actually approached by a group of Nemoidians who wanted him and the Ascendancy to fight against the new Emperor and his regime. But of course, it was the evil regime itself he ended up joining.

Initially, Thrawn sought to infiltrate the Empire for the Ascendancy, pretending to be exiled from his world. He was captured by Imperials after a night of devious and ingenious combat on his part, and was eventually brought before the Emperor himself. Palpatine, as well as his servants, were very impressed with the blue-skinned warrior.

After years of training and setbacks, Thrawn was recruited by Governor Arhinda Pryce to fight against the Rebels on Lothal as commander of the Seventh Fleet. His Star Destroyer was the Chimaera.

The Empire wanted to make use of his skills to quell the growing Rebel threat. Sophisticated and intelligent (much like General Sun Tzu of our world – author of The Art of War), the Chiss warrior sought to understand the enemies he fought, immersing himself in their various cultures. In particular, he studied the art of other worlds, gleaning clues for engagement from the way a people expressed themselves creatively. He was a manipulative, charismatic tactician with a formidable intelligence. 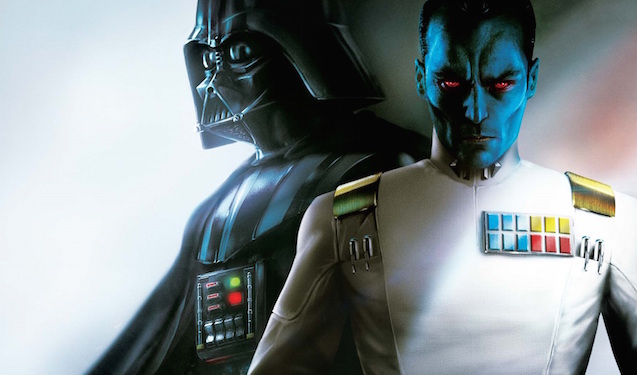 Thrawn served the Empire with gusto, becoming a favorite of the Emperor and earning the rank of Grand Admiral. He also worked with Darth Vader, formerly known as Anakin Skywalker. Thrawn had actually met Skywalker before the days of the Empire, even helping him in battle and aiding in the search and rescue of the Jedi’s wife, Padme Amidala. 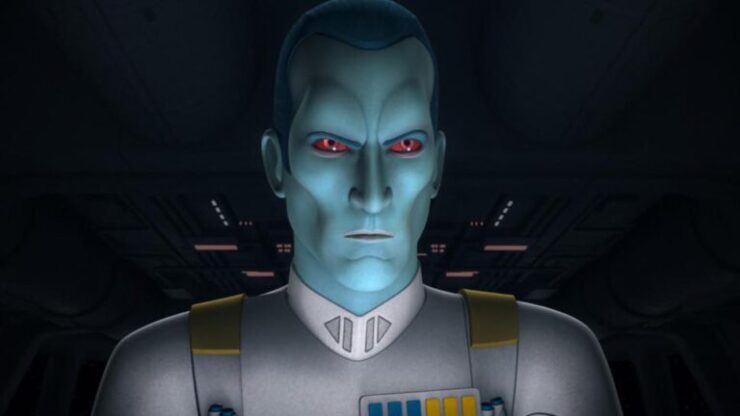 Thrawn grew even more as a fearsome military leader, developing weapons such as the updated starfighter ships. Working with other Imperials like Admiral Konstantine, he became a foil to Jedi learner Ezra Bridger, hunting him as well as other threats to the rule of the Sith Lord Sidious. These rebels included a group called the Phoenix Squadron, which Thrawn pursued after a few skirmishes. Though the Squadron continued its missions, most of the Rebellion were hesitant to sign off on any missions that would bring them into contact with Thrawn – his tactical brilliance often left them petrified.

Thrawn wondered why this group of Rebels had a high success rate regarding Imperial infiltration and sabotage, and he eventually learned that an agent of the Empire, Kallus, was passing the Rebel cell information under the name “Fulcrum.”

One battle saw Kanan Jarrus and his gang defeated by Thrawn’s forces. The Grand Admiral was readying to kill them, but a Force-wielding creature known as Bendu intervened. Thrawn was unable to defeat it before it disappeared, laughing about its prediction of Thrawn’s eventual defeat.

Thrawn later became involved with a civil war on Mandalore, helping fight the groups that rose up against the Empire-backed government. A new weapon, The Duchess, was employed by the new governor Tiber Saxon to crush the armor of Sabine Wren’s clan. 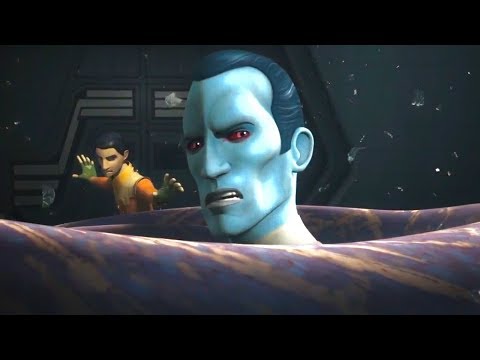 Thrawn attacked by the purgill.

The TIE Defender Project was under construction at Lothal, but a fight with the Rebels set it far back. The fuel for the project had been destroyed when Pryce ordered an attack on the Rebels, and Thrawn blamed her for the setback. On the other side, the incident resulted in the loss of Kanan Jarrus, the Jedi that was training Ezra Bridger.

Pryce was captured by Bridger and his team. Thrawn had weapons trained on the heroes at the Imperial Headquarters on Lothal, forcing Bridger to surrender himself to Thrawn’s custody. As Ezra eventually escaped, massive tentacled creatures called purgill surrounded the Chimaera. The ship and its crew, including Thrawn and Bridger, were pulled into hyperspace by the creatures. It is unknown where they emerged.

Eventually, the Empire fell. But Thrawn’s extensive knowledge of the galaxy and war technology was used by surviving Imperials for years to come, resulting in the birth of the First Order. 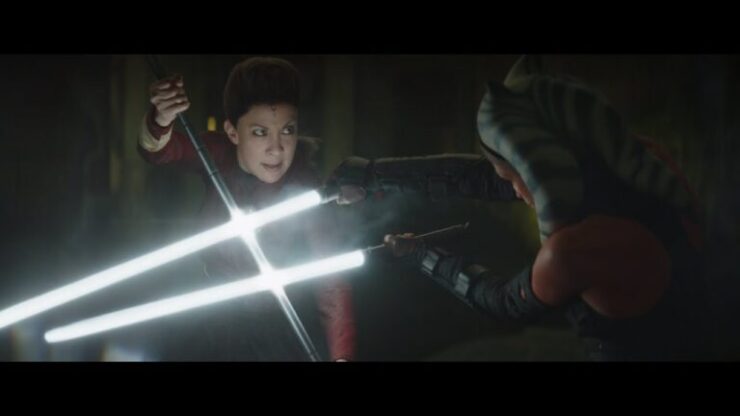 At one time, Thrawn was the master of Morgan Elsbeth, the merciless administrator in charge of the Calodan village on Corvus. The former Jedi Padawan Ahsoka Tano fought with Elsbeth and liberated the village, demanding to know the location of Thrawn. She was looking for her friend, and Thrawn’s last combatant, Ezra Bridger.

Do you fear the brilliance of Thrawn? Let us know in the comments, and don’t forget to Let Your Geek Sideshow!