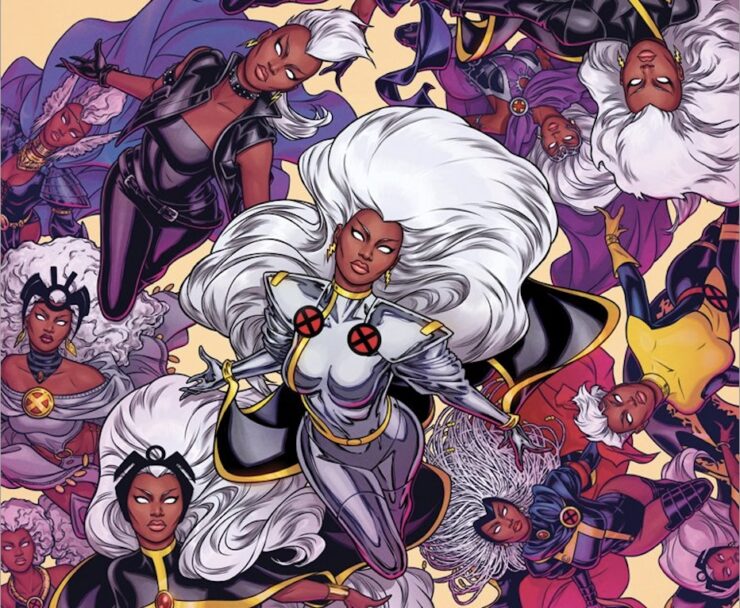 There are few X-Men more iconic, more all-powerful, and more inspiring than Storm. Known as Ororo Munroe to her closest teammates, Storm is undeniably one of the most important figures within the X-Men roster and Marvel comics as a whole.

She has been an effective teacher, a trusted mentor, and a goddess of the plains. She commands the room with only her presence and her power, as an Omega-level mutant, is limitless. And of course, there are the outfits. Nearly every costume worn by Storm could be considered peak fashion, but the following selections are some of the most memorable Storm looks to date. 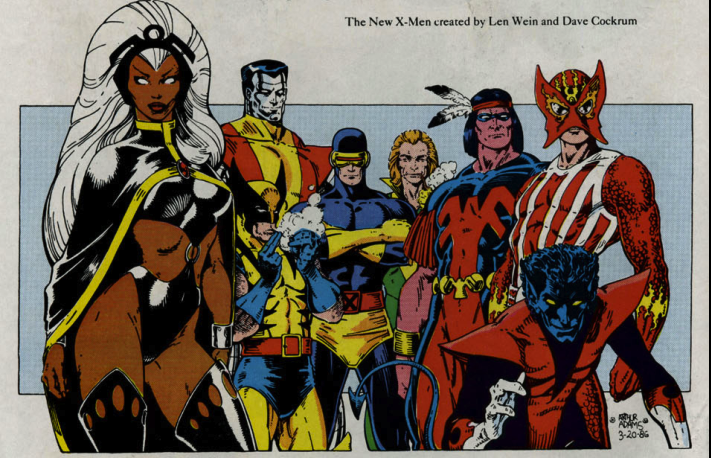 The look that started it all — sleek black cut-outs, voluminous shocks of white hair, and a signature headpiece. When Storm first joined the Uncanny X-Men in Giant-Size X-Men (1975), she was the only woman in an all-male lineup. But if there’s one thing that Storm will never be, it’s overshadowed. Her charisma immediately sent her on the path toward team leadership, and her action-worthy costume helped her along the way. 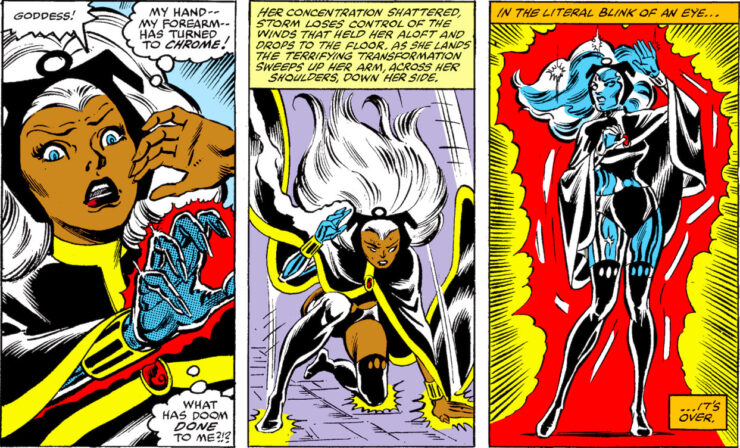 At this stage in her journey, however, Storm was still getting acclimated to working with a team. Formerly, she was worshipped in her home of Kenya as a literal goddess. So the whole “take orders and play well with others” thing was a bit new to Ororo. This was also a time when the X-Men were leaning into individualized outfits and not synchronized uniforms.

The black in Storm’s look lent her an air of authority — a different color scheme for a member of the X-Men compared to her teammates’ usual bright primary colors. And unlike Marvel Girl’s skirt situation, Storm was ready for action in thigh-high boots. Her cape allowed her to take advantage of her flight abilities and the headpiece was not only fashionable but functional in keeping her long hair away from her face. Storm’s important position on the team was established in no time. 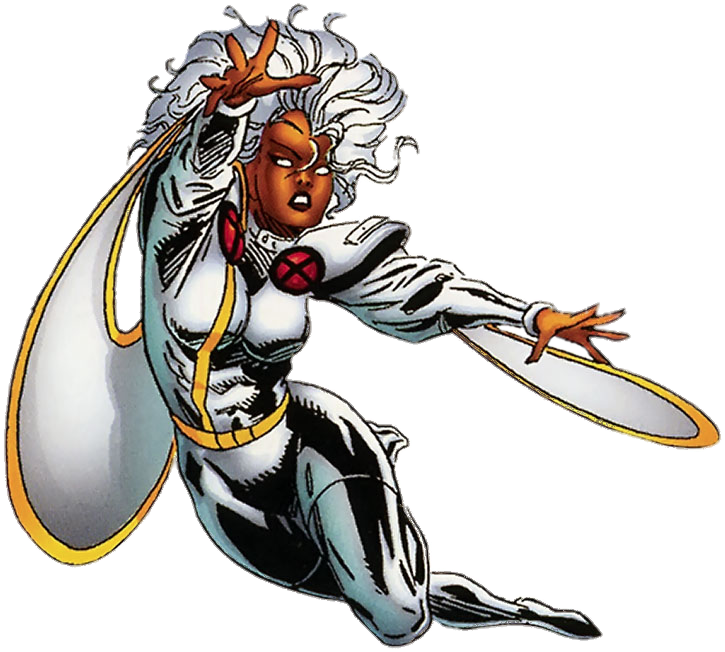 No collection of Storm looks would ever be complete without the absolutely iconic look lifted right out of the ’90s animated TV series. Silver, gold, with a dash of red and black on her shoulder X-emblems, this outfit is probably Storm’s most recognizable outfit. It even influenced her costume that was occurring in the comics at the time. Her silver bodysuit matched her flowing white hair, and a unique dual-cape design that looped from wrist to back allowed her to ride the winds high above battle.

In this costume, she personified the rage of the clouds, the snap of thunder, and the flash of lightning. As Mistress of the Elements, Storm has immense power at her fingertips and this outfit highlighted her limitless energy. When those pupils go white, you better take cover. 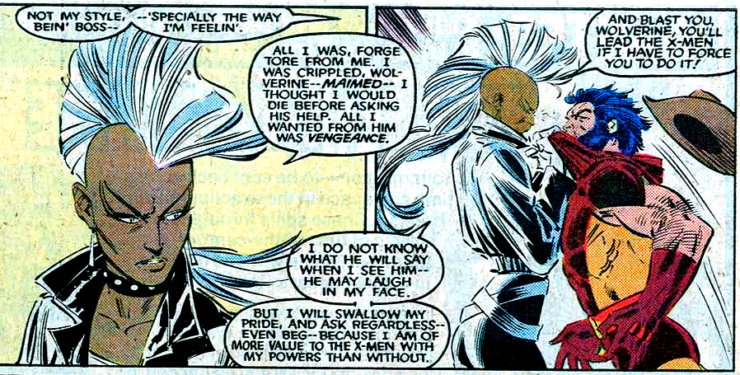 After years of being the responsible teammate, the reliable one who others could lean on, Storm finally asserted her independence. She chopped off her endless hair and traded in a bodysuit for a jacket and pants. This step in a new direction was inspired by her newfound relationship with Yukio, a Japanese assassin encountered by Storm at Wolverine’s wedding. Their bond would have a profound impact on the weather goddess’ attitude.

Having met Yukio, and recently assumed leadership of the Morlocks, Storm entered a new stage in her identity — one in which she could be truer to herself. She no longer had to uphold the position of house mother, constantly taking care of her teammates. In addition, Storm temporarily lost her powers during this time period. Powers or not, Storm discovered her worth beyond weather manipulation. Now, Storm could do her own thing on her own terms. This isn’t to say Storm suddenly became cold or unsympathetic. With her new look, Storm merely embraced an important aspect of her strength: unwavering independence.

Of course, Storm’s most famous shorthaired look is the mohawk but this cropped cut from the Age of Apocalypse is another worthy contender. The Age of Apocalypse was an era accidentally created by Charles Xavier’s son, Legion, who meant to assassinate Magneto but instead killed his father. The death of Xavier led to Apocalypse seizing control of the planet — all of which was later retconned to have occurred in an alternate universe.

No matter the setting, Storm is a mutant who rises to the top. In this incarnation, Ororo Munroe was never approached by Xavier to join the X-Men, so she became Windrider, a defender of her own African nation against the forces of Apocalypse. Drawn to her power, Apocalypse captured her and attempted to turn Ororo into one of his Horsemen. She was rescued, however, by Cyclops and soon joined the X-Men. Her cropped hair denotes the same rebellious attitude as mohawk Storm, and her high shoulder pads add sharp lines to an intimidating silhouette. An interesting note is that this version of Storm also became involved with Quicksilver. At least their hair never clashed? 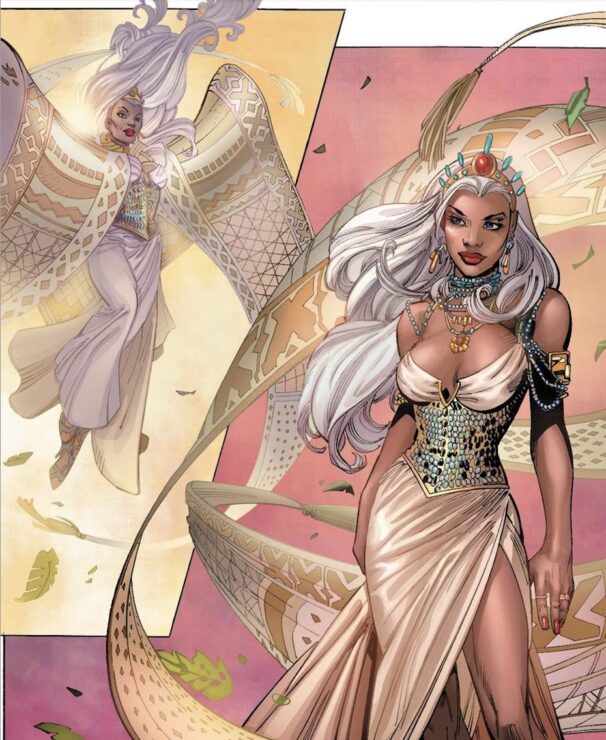 While Storm always looks like an absolute goddess, in both outfit and presence, her bridal dress is nothing short of ethereal. In a departure from her regular black and whites, sometimes emboldened by dashes of vibrant color, her wedding outfit is soft. The earthy cream tones of the fabric are offset by gold and turquoise jewelry to create a look that is regal in every sense. Her wedding to T’Challa, the Black Panther, was a globally recognized event.

This look emphasizes a time in Storm’s life when she let go of her independence to form a bond with someone else and to use that power in a new arena: international politics. As the Queen of Wakanda, Storm gained greater influence than she ever had as a member of the X-Men. While her marriage to T’Challa did not last, Storm developed a bond with the Wakandan royal family that would never be broken. 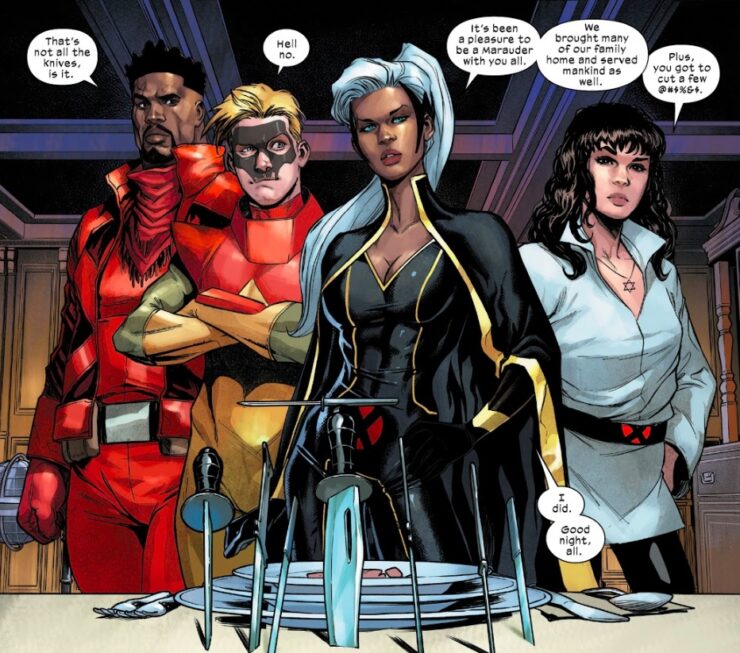 Most recently, in the Age of Krakoa, Storm has made a return to her original Uncanny outfit with, of course, some necessary upgrades. Her black headpiece now helps keep her long hair up in a high ponytail, which is far more practical for missions with Kate Pryde’s Marauders. Plus, her black leather bodysuit has more material and folds that allow Storm to hide her many knives and daggers. Finally, Storm’s look combines her power, stylish grace, and talent for combat all in one.

Though she has embraced the black and gold combo again, Storm’s role among the X-Men continues to expand. In addition to helping Kate on the high seas, Storm acts as a herald to the reborn mutants of Krakoa and she is also now the Voice of Sol. This position, as the regent of a newly terraformed Mars, places her on the government councils of two planets. For a weather goddess who can control atmospheres anywhere in the galaxy, Storm’s promotion makes all the sense in the world.

As a mutant whose power is mightier than the forces of nature, it’s only fitting that Storm’s costumes over the years would match her grand persona. Of course, there’s also her tempestuous outfit from last year’s Hellfire Gala, but check back next week for a complete rundown of all the looks from that show-stopping X-Men comics event.

Which Storm costume from over the years is your favorite? Let us know in the comments and don’t forget to Let Your Geek Sideshow!

Which Recent Horror Reboots are Worth Watching?