We all love the stormtroopers™.  The cold, calculated “expression” upon the metallic face. The sterile, totalitarian image of an army of identical, ivory colored warriors showing signs of robotic automata. The ability to always miss their targets … just kidding.

Whatever one thinks of the stormtroopers, it can’t be denied that they are the face of the Star Wars™ franchise, second only to the raspy voiced Lord of the Sith™ himself. We often like to thank George Lucas for this amazing visual, as well as all the other characters in the vast galaxy far, far away. However, the actual finalized designs were made by dozens of artists, creators, and special effects maestros. One of these people was Ralph McQuarrie.

After working to design and animate CBS News’ coverage of the Apollo space program, Ralph caught the attention of George Lucas. “In the beginning, you hire somebody because of their work,” said Lucas. “I saw his work, and it was fantastic and very beautiful. Then I met him, and he was a very sweet guy, easy to get along with. And with the combination of those things, I said ‘Let’s go.’” 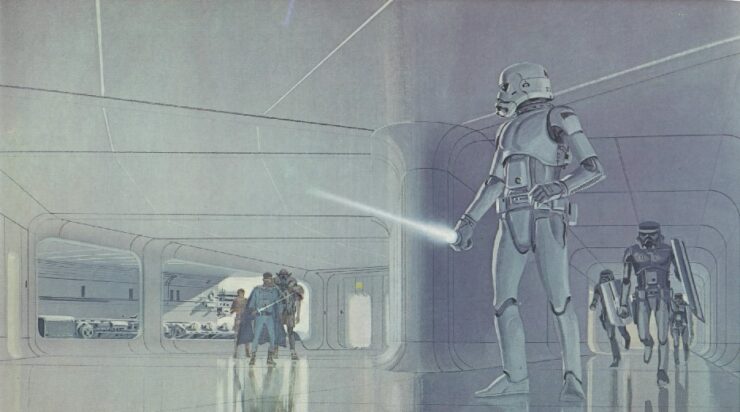 In 1975, Ralph McQuarrie began designing characters for Star Wars: A New Hope™, including Darth Vader™, C-3PO™, and of course, the stormtrooper. Star Wars characters are polarizing by their very nature — some characters are adored, while others are despised (yousa know what mesa talking about).

There is at least one constant, however. Whatever side a fan chooses, (the dark side or the light), they cannot help but acknowledge the presence of Star Wars’ most prolific baddies. In the original trilogy, stormtroopers easily outnumber any other character group.

McQuarrie was the man who took the thoughts of Lucas and, via paintings of exquisite detail, transposed them to the realm of visuals. From even his earliest artwork, it’s clear that not only was Star Wars an idea of potentially infinite possibilities, but some of its characters were already capable of achieving the dynamic presence required to become pop culture icons, well ahead of the film’s actual release.

Fans can rest assured that even though McQuarrie has been at rest since 2012, his original stormtrooper designs are recognized by a demographic made up from every country, class, and fandom. Even Star Wars haters (wait…do people like that actually exist?) can recognize a stormtrooper.

From Sketch to Screen 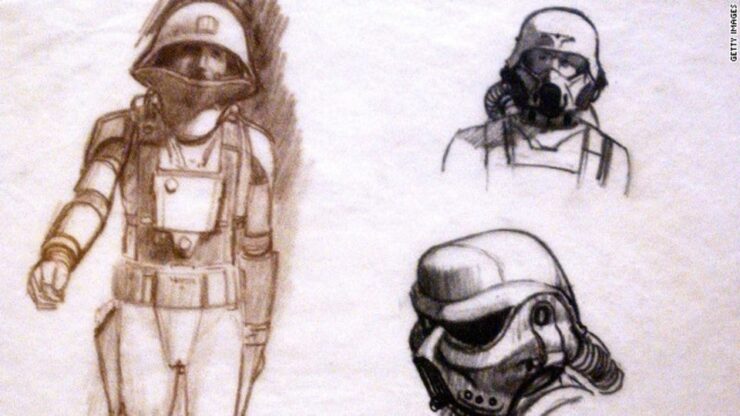 What you see on your screen is pretty close to McQuarrie’s original designs. However, there are some notable differences between McQuarrie’s original concept and the final product. The most obvious of these is a Star Wars staple perhaps even more well-known than the protagonists who carry them: the lightsabers.

In one of McQuarrie’s most celebrated paintings, a stormtrooper wields a lightsaber. Originally, these laser sword weapons weren’t intended for use by only one set of characters — it was an intergalactic weapon used by the Rebellion and Empire alike. The Force actually didn’t exist in the earliest drafts of the story. Instead, the Jedi™ and the Sith™ were simply trained swordsmen.

Aside from the lightsabers, there are other subtle but important differences between McQuarrie’s initial design and what was realized on film. The original design had a more “modern” face — one very close to that of a fighter pilot’s helmet. The mask was much wider than the face of its human owner. Presumably this was an attempt to show audiences that it was a futuristic device capable of filtering out smoke, chemicals, and anything else the environment (or the Rebel Alliance) could throw at it. The finished version seen in the film is even wider than the original McQuarrie concepts.

These pieces were then bolted together, which initially created a problem — some of the hardware was visible on the sides. However, as it often is with art, this “mistake” brought something new to the design: the “ears” of the stormtrooper.

Making the Stormtrooper Design a Reality 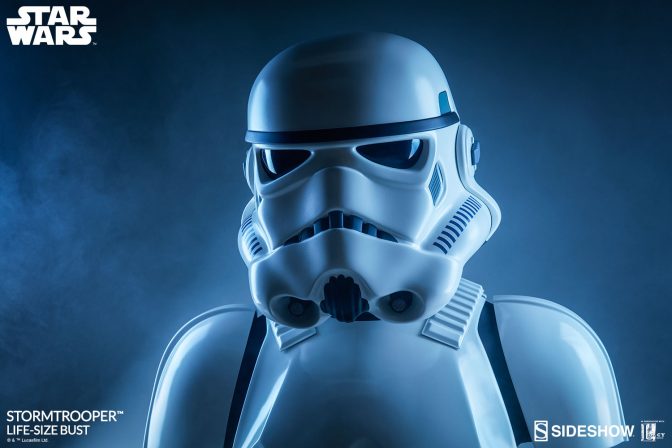 The whole design of the film was a rewarding, if at times arduous, process. McQuarrie is reported to have said in an interview that stormtroopers would prove to be the biggest challenge. Combining the aesthetic of a Japanese warrior with a seemingly metallic set of futuristic armor not only seemed outlandish, but it required a lot of work, as did the rest of the film.

Regarding the doubts and difficulties surrounding the movie, perhaps McQuarrie summed it up best: “I just did my best to depict what I thought the film should look like, I really liked the idea. I didn’t think the film would ever get made. My impression was it was too expensive. There wouldn’t be enough of an audience. It’s just too complicated. But George knew a lot of things that I didn’t know.”

To some of the people responsible for bringing the concept to life through molds and costumes, McQuarrie’s concept art suggested a number of intriguing possibilities. Andrew Ainsworth, the chief molder responsible for the techno-soldiers’ existence in real time, had some interesting thoughts about the artwork:

“The concept drawings from Ralph McQuarrie suggested that the stormtrooper was a futuristic being that had evolved through continuous genetic modification, and perhaps able to operate in adverse pungent climatic conditions. The helmet would therefore be able to filter noxious gases, and the armor would be so flexible that it actually could have grown on the character that way — much the same way as an armadillo has natural armor.” Andrew designed many futuristic features of the stormtrooper, including the stylized ammunition belt (for more on his work with the stormtroopers, check out his website).

Without Ralph McQuarrie, we as Star Wars fans would lack many things. The breathing apparatus of Darth Vader. The cantina at Mos Eisley™. The city in the clouds of Bespin™. And of course, the cool looking bad guys who are bad at aiming.

To this day, McQuarrie’s designs continue to bring wonder and light to our eyes, both from the work he did with the classics as well as the newer material he inspired. Even the titular starship from Star Trek: Discovery was inspired by Ralph McQuarrie’s work on the abandoned film Star Trek: Planet of the Titans. And with Disney’s ever expanding Star Wars universe, many of McQuarrie’s designs are being fished out of the archives to inspire a number of new and exciting concepts.

Thanks to George Lucas, Ralph McQuarrie, Andrew Ainsworth, and countless others, children join the Rebel Alliance every day in their backyards. Creative writers are inspired to dream up the next icons of cinema and film corporations make billions of dollars every year. Star Wars has achieved a cultural status comparable to the myths and legends of old.

Star Wars has always captured audiences’ imaginations with its mythological connections, powerful themes, and eye-catching aesthetics.We can only hope that the names of the “modern myth weavers” are never forgotten—and right now, it doesn’t seem like the innovators require any of our hope at all. Disney is seeing to that. Just remember that everything you’re crazy about as a fan — every single thing — originated within the minds of normal human beings. What does that tell you about yourself?

What’s your favorite stormtrooper design? Tell us in the comments and don’t forget to Let Your Geek Sideshow!