Summer might have arrived early this year, but with Stranger Things season three on the horizon, it’s time to cancel your barbecue plans and back out of your pool parties, as we’re here to remind you about the high-priority date with a Demogorgon pencilled in on your social calendar.

Make sure to bring an appetite, as we’re sure that there will be plenty to feast your eyes on when the next season of the Duffer brothers’ hit horror series lands on Netflix’s insatiable menu this week, especially since we’re still chewing over the array of questions, mysteries, and conspiracies leftover from the last season. The new batch of episodes are so close now that we can practically taste them and judging by everything we’ve seen so far, the third season is set to offer up a smorgasbord of fresh and familiar faces, hordes of monsters, major new locations, and some of the greatest special effects yet.

Now, to satisfy your cravings in the meantime, we have compiled a comprehensive list of everything we know about Stranger Things season three so far – including all of the details shared in the tantalizing trailers, cast member announcements, and plot teasers.

Read on to find out more!

When Does Stranger Things Season 3 Debut?

Netflix welcomed in the new year with a special release date announcement for the upcoming season of Stranger Things, revealing that the streaming smash hit would be released on Independence Day- July 4th, 2019- for a summer that will change everything (including your holiday plans).

The announcement appeared alongside a brand new poster for the season, which fans had hoped might drop a little sooner. However, Netflix’s Vice President of Original Programming, Cindy Holland, indicated that the delay was due to Shawn Levy and the Duffer brothers’ desire “to deliver something bigger and better” this time.

There was a one-year time jump between the first two seasons of Stranger Things, with the first season taking place in November 1983 and the second season skipping forward to October 1984, but this will not be the case for chapter three.

The third season will take place in the summer of 1985, just six months after the gateway to the Upside Down was closed, forcing the Mind Flayer out of Hawkins, and the kids attended Hawkins Middle School’s Snow Ball, causing Mileven shippers to come out in force as Mike and Eleven finally shared a kiss.

Besides the release of New Coke, 1985 was a very big year for movies, so we should expect an innumerable amount of pop culture references this series, with The Goonies, Back to the Future, and The Breakfast Club standing out as possible contenders for associations this time around.

In an interview with CinemaBlend, David Harbour, who plays Police Chief Jim Hopper in the series, revealed that the show’s creators found inspiration in an unexpected place, citing the Chevy Chase comedy Fletch as an influence for season three.

Are There Any Other Plot Details For Stranger Things Season 3?

“It’s 1985 in Hawkins, Indiana, and summer’s heating up. School’s out, there’s a brand new mall in town, and the Hawkins crew are on the cusp of adulthood,” it read. “Romance blossoms and complicates the group’s dynamic, and they’ll have to figure out how to grow up without growing apart. Meanwhile, danger looms.”

“When the town’s threatened by enemies old and new, Eleven and her friends are reminded that evil never ends; it evolves. Now they’ll have to band together to survive, and remember that friendship is always stronger than fear.”

How Many Episodes Are There In Stranger Things Season 3? 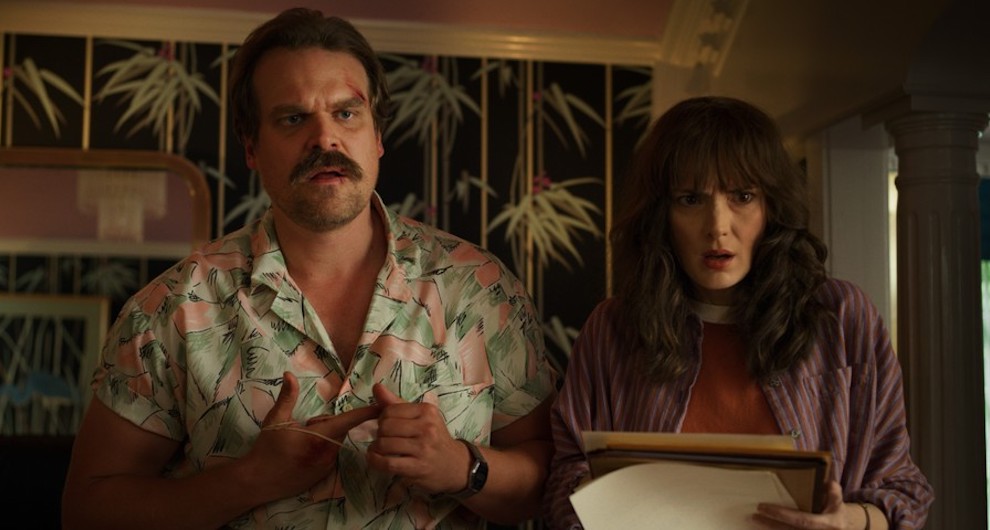 Back in December, Netflix shared the episode titles for Stranger Things season three, confirming that the series will comprise of eight episodes in total, matching season one, but making it one episode shorter than season two.

Executive producer Shawn Levy previously told Glamour magazine that the third season of the retro web series would likely include eight or nine episodes. “The number of episodes will be dictated by the amount of story that excites us,” he rationalized at the time.

Here are the titles of the eight episodes of season three:

Fans almost immediately unlocked their curiosity doors to start analyzing these cryptic tags for clues while also theorizing about what they could possibly reveal about the central storyline.


Will The Whole Cast Return For Stranger Things Season 3? 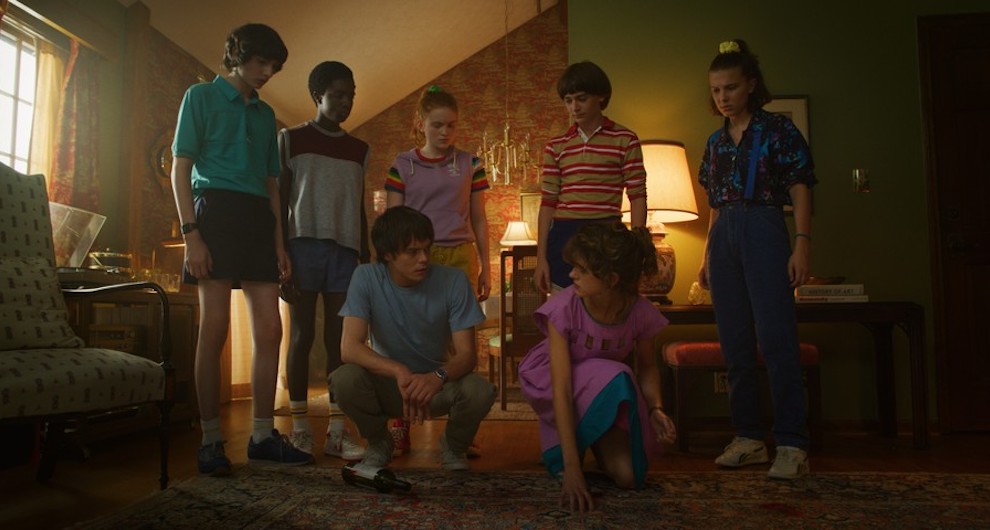 The young stars of Stranger Things were identified as the ultimate squad shortly after the Netflix drama exploded onto the scene in 2016. And while each character has their own individual story arc, many would agree that they often work best when they are together.

Season two newcomers Sadie Sink, who played the rough and tumble skater girl Maxine (aka MadMax), and Dacre Montgomery, who slotted into the role of her mullet-wearing jock stepbrother, Billy Hargrove, will also feature at the centre of the story again.

Likewise, Priah Ferguson, who played Lucas’ sassy little sister Erica Sinclair, has been brought back on board for the new episodes. In fact, Netflix announced that she would play a much larger role this season too, as she would find herself on a “wild mission to save Hawkins from a dangerous and unexpected new threat.”

Will There Be Any New Characters In Stranger Things Season 3?

There will be some new arrivals in Hawkins this year, as Mayor Larry Kline, played by The Princess Bride actor Cary Elwes, will take center stage as an image-conscious politician who is “pathetic and driven only by his own interests”, according to his official character description.

Giving him a run for his money, Jake Busey, who is best known for playing the smart-mouthed soldier Ace Levy in Starship Troopers, will portray Bruce, who is said to be a misogynistic reporter for The Hawkins Post with “questionable morals” and “a slick sense of humour.”

Reports also suggest that there will also be another new character called Patricia Brown, who will play the part of a sweet elderly neighbor, who spends “a lot of time tending to her garden and offering her advice to the neighborhood kids.”

As for the younger crew, Maya Thurman-Hawke will join the main cast as an additional new character by the name of Robin. The “alternative girl” will work with Steve Harrington at Scoops Ahoy, but will become involved in the supernatural side of Hawkins when she uncovers a dark secret.

Lastly, Haters Back Off star Francesca Reale will put in an appearance as Heather, a popular lifeguard at the Hawkins Community Pool who will work alongside Billy Hargrove before she becomes enveloped in a dark mystery exposed in the troubled town.

Is There A Trailer For Stranger Things Season 3?

Stranger Things’ nostalgia-driven marketing has been in overdrive for the third season, with bite-sized teasers to test our nerves, fresh new posters to hang on our walls, and full-blown trailers to crank the hype level up to eleven.


Our first look at the new series arrived in the form of an advertisement for the Starcourt Mall, a major new location in Hawkins that is publicized as being one of the finest shopping facilities in America, which is also home to Scoops Ahoy Ice Cream shop.

The first full trailer for Stranger Things season three landed earlier this year. It opened with the original gang surprising Dustin on his return home from summer camp, giving us a glimpse of all of our favorite characters who are certainly not kids anymore.


A few months later, Netflix released a teaser clip titled “Summer in Hawkins”, which shows Billy flexing his muscles (as well as his power) during a shift at the Hawkins Community Pool, where he catches the eye of Mike and Nancy’s mother, Karen Wheeler, played by Cara Buono.

Towards the end of June, the final full-length trailer for the upcoming series was shared online, promising some of the show’s goriest episodes thus far, as the core gang face an epic showdown with the monstrous Mind Flayer’s forces of evil once more.

Stranger Things season three will arrive with a bang on Netflix this Independence Day- July 4th, 2019. So if anyone asks where we are this weekend, we’ve left the country.

Will you be watching Stranger Things season three when it premieres? Which characters are you most looking forward to returning this year? Let Your Geek Sideshow and tell us in the comments!