Stranger Things made its highly anticipated return on May 27 with seven lengthy and thrilling episodes. As fans prepare for volume 2 of the fourth season, we are recapping the events of volume 1.

Check out our recap for episodes 1-4 here, then come back for the rest of volume 1! 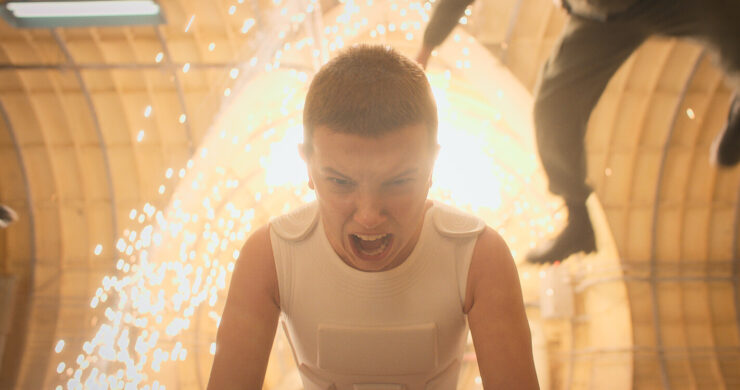 Lt. Col. Sullivan searches the Byers’ home and finds a letter Eleven left for Mike before her departure. He takes the wounded agent in hopes of gaining the intel he is seeking.

While Argyle panics, Mike, Will, and Jonathan bury the dead agent they had tried to rescue. Will and Mike lament the fact that the agent couldn’t tell them where El was before he died. Suddenly, Mike realizes that the pen the agent gave them had a paper inside with a clue to El’s location. Jonathan figures out that the numbers on the paper call a computer. Realizing they need a hacker, they head to Utah to enlist Dustin’s genius girlfriend Suzie.

Over in Russia, Hopper and Dmitri form an alliance following their arrest for their shared conspiracy as they languish in a cell. Yuri takes flight with Murray and Joyce on board his plane with the intention of turning them over to the Russians. With glass from a broken peanut butter jar and some surprising karate skills, Joyce and Murray escape their bonds, overpower Yuri, and crash land the plane.

Dr. Owens takes El to an underground facility in the middle of the desert. She is horrified to find Dr. Brenner alive and well at the facility. She tries to escape, but without her powers, she is unable to do so. She is sedated as Dr. Brenner assures her everything will be okay.

Eleven wakes up in a hospital gown with her head shaved; she is somehow back at Hawkins Lab. It is revealed that she is in a sensory deprivation tank reliving a memory as part of Brenner and Owen’s attempts to help El regain her powers. Eleven regrets her decision as she is forced to relive painful and confusing memories of her past under Dr. Brenner’s guidance.

She tries to escape once again but she is surrounded by guards. In a moment of fear and desperation, she is momentarily able to harness her powers. Recognizing that it is working, she takes Dr. Brenner’s hand and returns with him willingly.

Back in Hawkins, Max draws Vecna’s Mind Lair as she saw it in her vision. Recognizing the door Max drew, Nancy folds and assembles the jumbled pieces of Max’s drawing to form Victor Creel’s former home. Steve, Nancy, Robin, Max, Dustin, and Lucas break into the Creel home to see what clues they can find. Max and Lucas share a bonding moment over Kate Bush, and the romantic tension grows between Nancy and Steve once again. The group soon realizes they can use the lights in the home and their flashlights to track Vecna and find themselves in the attic.

Meanwhile, Jason’s resolve to find Eddie is strengthened following Chrissy’s funeral. One of his friends suggests they try to find him at Reefer Rick’s. When they do find him there, Eddie tries to escape on a boat as Jason and his friend Patrick swim behind him. Patrick, who had been having visions of his own, suddenly levitates in the air as he becomes Vecna’s third victim. Right as he is killed, the flashlights of everyone convened in the attic at the Creel home shatter. 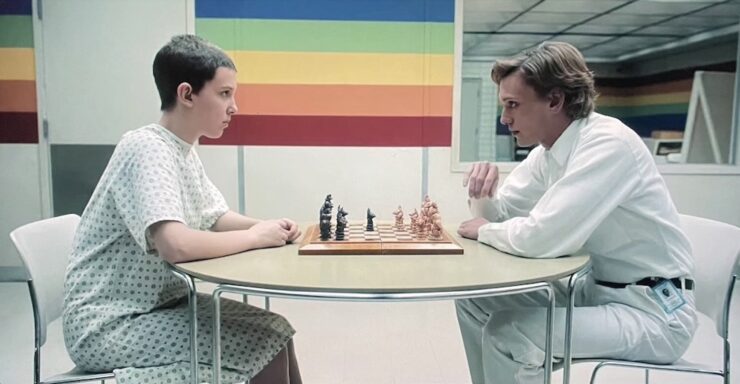 Following Patrick’s supernatural death, Jason is interviewed by the Hawkins police. He insists that a devil-empowered Eddie was responsible. The police chief holds a meeting about the recent murders. Jason uses the gathering as an opportunity to rally the people of Hawkins to find the members of the Hellfire Club. The parents of Dustin, Mike, and Lucas all begin to worry as a picture of their children’s club is circulated.

Argyle, Jonathan, Mike, and Will arrive in Utah. They create a cover story, telling Suzie that they need to figure out the secret location to win a new video game console for Dustin. Suzie sneaks into her father’s office to use her confiscated computer, cracking the code and giving the boys the intel they need.

Back at the secret facility, Dr. Brenner tells Eleven more about the process that will help her regain her powers. He tells her that they must unearth memories as Eleven experiences them in the sensory deprivation tank. She returns to her memories, one of which shows her forming a bond with an orderly at the lab.

This orderly tells her that despite Papa’s insistence to the contrary, there had once been a One at the lab. He also tells Eleven that the key to unlocking her powers is sad and angering memories, going on to explain that the woman she remembered breaking into the lab when she was younger had been her mother. In her memories, Eleven uses her lessons from the orderly to win a challenge. She is attacked by four older kids as a result.

In Russia, Murray and Joyce devise a plan to infiltrate the prison, bringing Yuri along. Murray once again puts his Russian language skills to use to pose as Yuri.

Back at the prison, the men contained with Hopper and Dmitri rejoice as they are fed a great feast. Hopper deduces that the creature being described by another prisoner is a Demogorgon, telling them that they are almost certainly going to die. Once they are back in their cell, Hopper reveals that he stole the bottle of liquor he had been holding during their meal as well as a lighter he lifted off a guard. He tells Dmitri that the Demogorgon is weak against fire, and both men feel more hopeful about their prospects.

Man on the Run

In Hawkins, Eddie is on the run. Stealing a walkie talkie from a construction site, he contacts Dustin, Lucas, Max, Robin, Nancy, and Steve. The group had just arrived at Eddie’s former hideout, where the police chief announces that Eddie is a person of interest in the recent string of murders.

Despite Dustin’s compass going haywire, the group reconvenes with Eddie Munson at Skull Rock. They trade information, realizing that they need to get to Vecna’s lair in the Upside Down to defeat him. Dustin has a revelation, recognizing that his compass has been acting strange due to a new, smaller gate to the Upside Down creating an electromagnetic field. His compass leads them back to the lake.

As the police close in on them, the older kids take a boat out on the water with Dustin’s compass guiding them. The younger kids are eventually found by the police.

On the boat, Steve jumps into the water and finds the gate. He surfaces and tells the others he found the gate, only to be dragged back underwater. Nancy dives in after him without hesitation, followed closely by Robin and an anxious Eddie. Steve is attacked by Demobats in the Upside Down just as the episode ends. 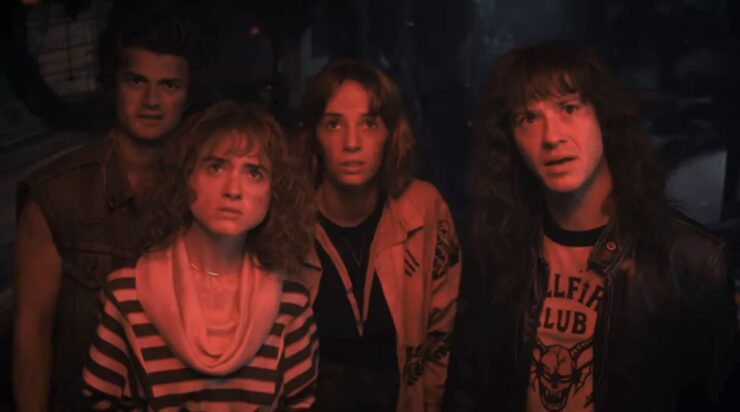 Lucas, Dustin, and Max have been taken into police custody. They are interviewed at the Wheeler home, insisting that they knew nothing about Eddie’s whereabouts. The chief decides to interview the kids one at a time.

As Max is interviewed, Dustin, Lucas, and Erica talk about what they know. Through their discussion, Dustin concludes that the murders were merely a means to an end. They were ultimately a psychic connection which allowed Vecna, who serves the Mind Flayer, to create smaller gates from the Upside Down into Hawkins at the murder sites.

What Comes Up … Must Come Down

Nancy, Robin, and Eddie come to Steve’s rescue in the Upside Down. Nancy tends to Steve’s wounds as they try to figure out their next move. They make their way to the Wheeler home in hopes of finding Nancy’s guns, only to find that the Upside Down is stuck several years before Nancy acquired her firearms.

While there, Steve hears Dustin’s voice. Nancy remembers that Will was able to communicate using lights when he was stuck in the Upside Down. They get the younger kids’ attention, and using little Holly Wheeler’s Lite Brite, Lucas, Dustin, Erica, and the older kids communicate between worlds. Dustin tells the older kids his theory about the murder sites being gates. Nancy, Steve, Robin, and Eddie bike to Eddie’s trailer, where they meet up with Dustin, Lucas, Erica, and Max on opposite sides of the portal.

Robin and Eddie make it to the other side. Nancy follows after them, but is pulled into a trance by Vecna.

In Russia, Hopper and Dmitri discuss their children and their hopes to return to them. As night falls, Joyce, Murray, and Yuri arrive at the prison. Their plan of deception works and they are brought outside to the prison yard, where they see Hopper and the other inmates preparing to face the Demogorgon. They watch on anxiously as the other prisoners are slaughtered.

Murray holds the warden at gun point and demands that he have the Demogorgon killed. When he refuses, he heads inside where another soldier refuses to open the doors to the yard. Hopper wards off the Demogorgon with fire as Dmitri tries to open the doors to the prison. Murray puts his karate lessons to use once again as he incapacitates the Russian soldiers in the control room. Murray and Joyce open the door, saving Hopper and Dmitri, just in time. Finally reunited, Hopper and Joyce embrace.

One Is the Loneliest Number 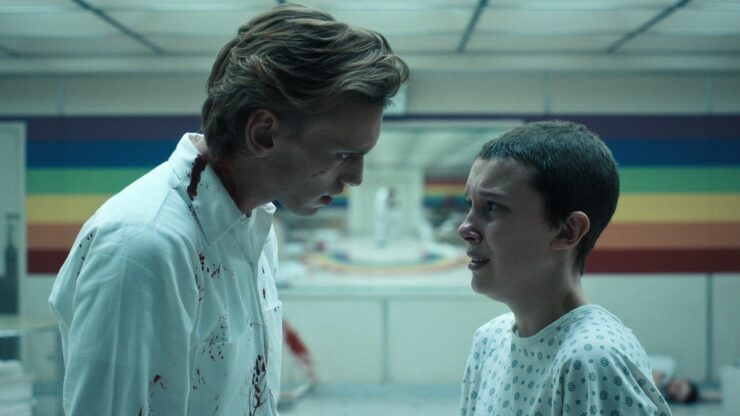 Eleven continues her training in the underground facility. Dr. Owens tells Dr. Brenner that he worries the process of Eleven regaining her powers is taking too long. Dr. Brenner tells Eleven that she must face her past and face herself to regain her powers. Eleven agrees to go back in the tank.

In her memories, the orderly tells her that if she stays, the children who attacked her will try to kill her with Papa’s consent. He helps her make an escape plan. Eleven removes a tracker from the orderly’s neck using her powers. The two would-be escapees are found, and the orderly reveals that he has powers, and is in fact One. Eleven disobeys his instructions to wait for him to return for her and finds that he has killed everyone in the lab.

One reveals his past to Eleven, with viewers learning that he is in fact Henry Creel, the son of Victor. He claims responsibility for his mother and sister’s death, saying that he was taken in by Dr. Brenner following his hospitalization. He revealed that Dr. Brenner could not control him, so he put the device in his neck to subdue his powers. When Eleven is invited to join One, she refuses. He tries to kill Eleven, but using the lessons he taught her, she overpowers him, sending him to the Upside Down. It is revealed that in his interdimensional journey, he changed into Vecna.

As season 4 of Stranger Things draws to a close, there is much to look forward to. Will Eddie’s name be cleared? Will El finally have her powers back? Will Nancy escape Vecna’s grip?

With Chapter 8 lasting almost an hour and a half and Chapter 9 coming in strong at two and a half hours, fans can hope they will get the answers they are seeking, as well as some insight into Stranger Things‘ fifth and final season. Join the conversation alongside other Stranger Things fans in the Let Your Spoiler Sideshow Facebook Group, and don’t forget to Let Your Geek Sideshow!