Alien tells the story of a cargo crew whose journey home is interrupted by a beacon which ultimately leads them on a deadly detour. The film follows one character, Ellen Ripley, more closely than the others. Her story is told through more than her words and behavior; her appearance throughout the movie clues viewers in to her level of distress, her level of functioning, and her varying states of strength and vulnerability. 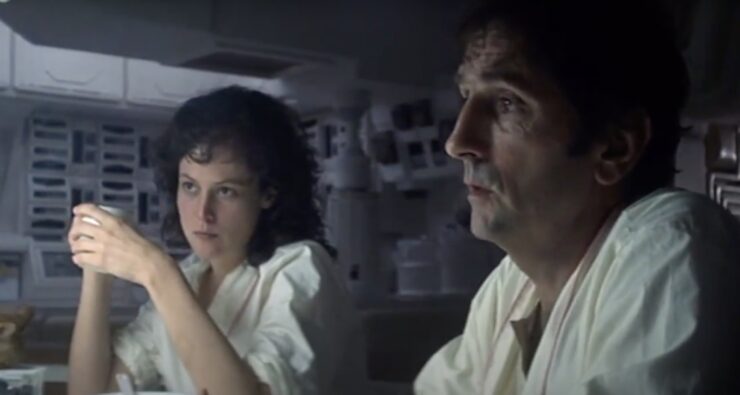 Viewers meet Ellen Ripley for the first time aboard the Nostromo, a commercial towing vehicle, as it returns to Earth with a large cargo delivery. When we first see the full crew after they wake up aboard the ship, each member wears their own clothes with the exception of Ash, who is already in uniform. While many of Ripley’s crewmates look somewhat sweaty and disheveled, Ripley’s long, curly hair looks clean and tended to. Her white top is neatly fastened and her sleeves are rolled up.

Already, viewers can see that this is a woman who is orderly and in spite of the evident camaraderie between everyone onboard, she maintains more professionalism than some of the others. Ripley’s clean and put together appearance stands out, and foreshadows her ability to remain clear and unruffled, even as their course home descends into chaos and violence. 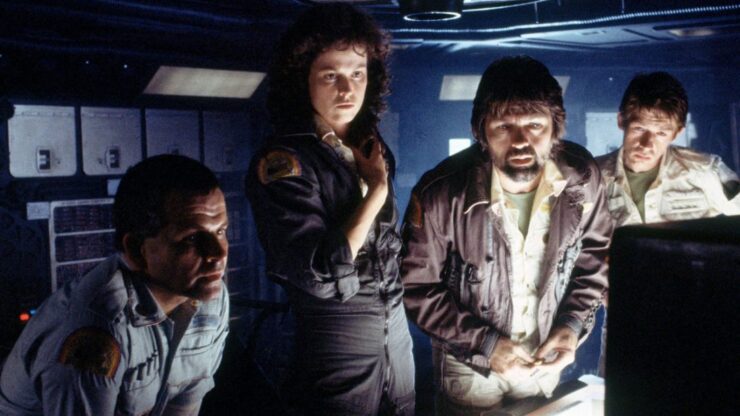 As the crew of the Nostromo begin their jobs aboard the ship, Ripley and many of the others aboard change into army green jumpsuits. They soon learn that in spite of their plans, they had been awakened only halfway through their journey when their ship received a transmission. Ripley remains one of the most professional and composed, both in appearance and behavior. This simultaneously tells viewers very little yet also a lot about Ripley as a person; she does not let emotion or any personal concerns cloud her judgment and her dedication to protocol. 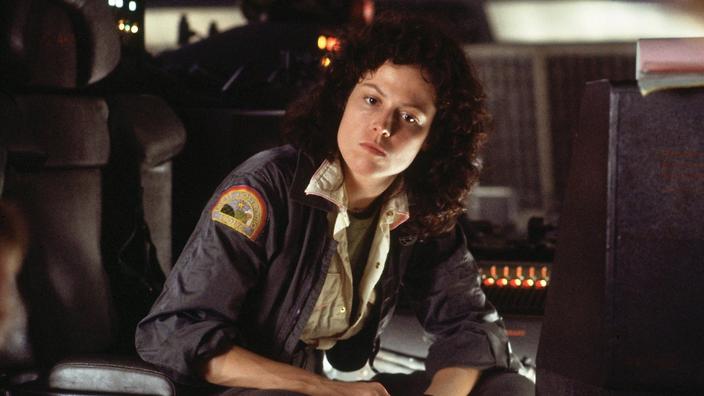 Other crew members wear more personal items, ranging from baseball caps to bandanas to Hawaiian shirts; these are the same crew members that become most emotional at the revelation that they need to take an unintended detour with unknown consequences. As they express dismay and confusion, Ripley, dressed professionally and in a way that betrays little about her as a person outside of her job, seeks to understand more about the transmission that interrupted their charted course.

As concern and irritation continues to ripple through much of the crew, Ripley remains curious and calm. Instead of complaining, Ripley gathers information to prepare for what lies ahead. Even as the Nostromo makes a rocky landing on LV-426 and in spite of clear signs of feeling the stress of their circumstances, Ripley is level headed.

Ripley remains in uniform as three of her crewmates, Dallas, Kane, and Lambert, gear up to explore the planet and seek out the source of the beacon. During their absence, she is able to decipher the beacon’s intent, believing it to be some kind of warning instead of an S.O.S. As it would turn out, her inclination that the beacon was intended to caution any nearby travelers was correct. 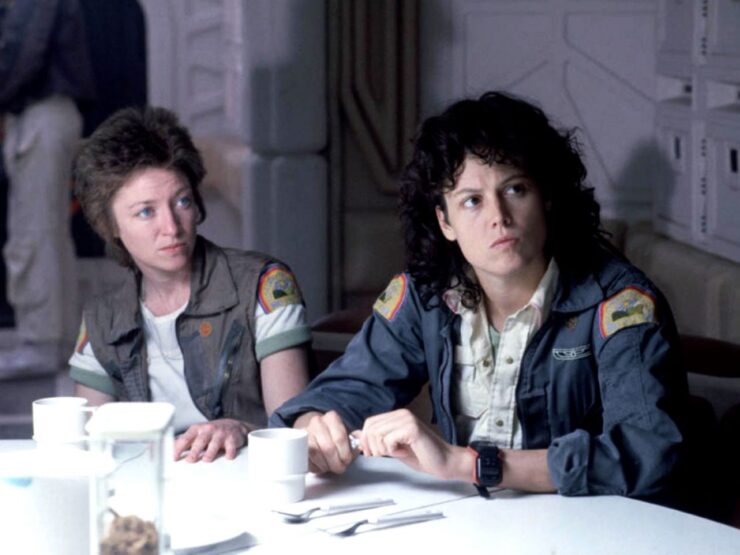 As Dallas, Kane, and Lambert explore a strange, abandoned ship, they come across a chamber containing countless eggs. An unknown alien creature launches itself from one of the eggs and affixes itself to Kane’s face. The group hurries back to the Nostromo with Dallas demands to be allowed back on board. While the crew on the other side of the door panic, Ripley remains steady and by the book, telling Dallas that it is against protocol as the entire ship could be compromised if an unknown biological specimen is brought on board. In spite of Ripley’s calm, reasonable insistence that the doors remain sealed, Ash allowed the group to board. Ripley, still composed and in uniform, continues to question and express strongly worded concerns about the reckless approach to the mysterious and dangerous organism that had been allowed to board the ship. 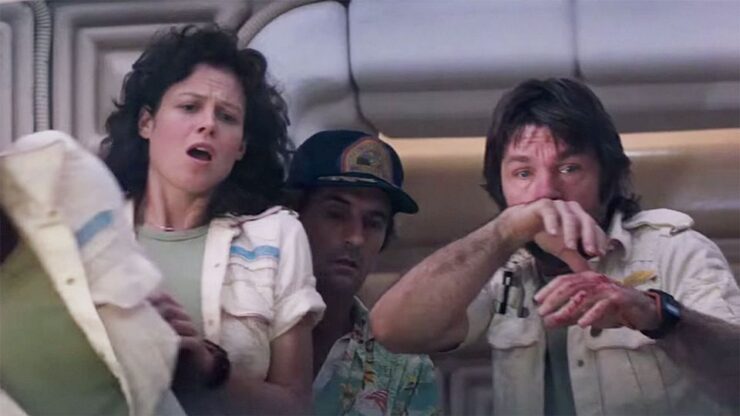 Kane seems to make a miraculous recovery and the creature is dead and dissected. A sense of calm takes over the ship. As the group dines together, Ripley’s jumpsuit is pulled down and tied around her waist; her white undershirt is partially unbuttoned and the sleeves are rolled up. She appears still ready to dive in and respond to her professional duties, but certainly more relaxed and comfortable.

As they celebrate and enjoy one another’s company, a creature bursts from Kane’s chest. Ripley is one of the few to not be struck by the blood spraying from Kane’s body. She is clearly shaken, but not hysterical like some of the others. As always, she remains one of the few to appear and act in a way that is both appropriate to the situation at hand, but markedly more put together than many of her compatriots.

The group releases Kane’s body into the vastness of space, and Ripley appears once again dressed in full uniform. The removal of layers of professional clothing was primarily from a place of relaxation and perceived safety, and with that comes a degree of vulnerability; in that regard, it only makes sense that after the horror she had witnessed, all sense of safety had been destroyed and layers would be added back on, almost like armor.

As the alien takes out crew members one-by-one, Ripley remains in uniform but starts to look worse for the wear. With the exception of Ash, however, she remains the most composed in appearance and in her approach to the danger at hand. Her uniform remains intact, but she is flushed, her skin has a sheen of sweat, and her hair becomes increasingly disarrayed. 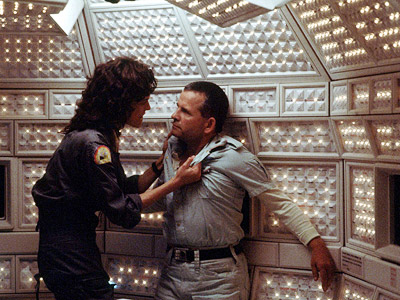 Ripley begins to operate based on emotion when she learns that the entire crew was considered expendable, and Ash had known all along. The two crew members engage in a violent fight. Ripley becomes even more disheveled, bleeding from her nose. She grapples with Ash until Parker and Lambert come to her aid.

Recognizing that the only course of action was to abandon ship, the remaining survivors get ready to leave in the lifeboat. Ripley, whose long, curly hair had been down until this point, quickly ties it into an efficient bun as she prepares. While she prepares, the alien finds and kills Lambert and Parker.

Finding them dead, Ripley continues with their plan. Armed with a flamethrower, Ripley comes face-to-face with the alien and barely escapes. She retrieves Jones the cat and sets the Nostromo to self-destruct. Ripley, truly frantic for the first time and drenched in sweat, boards the lifeboat and watches the Nostromo explode.

Finally feeling safe, Ripley strips down to her undergarments to go into hypersleep for the remainder of the journey home. This level of dress, at first highlighting Ripley’s sense of safety, becomes a point of vulnerability when she realizes that contrary to her belief, the alien had survived the Nostromo’s destruction and stowed away on the life boat. Ripley quickly hides, slowly slipping into one of the space suits on board. 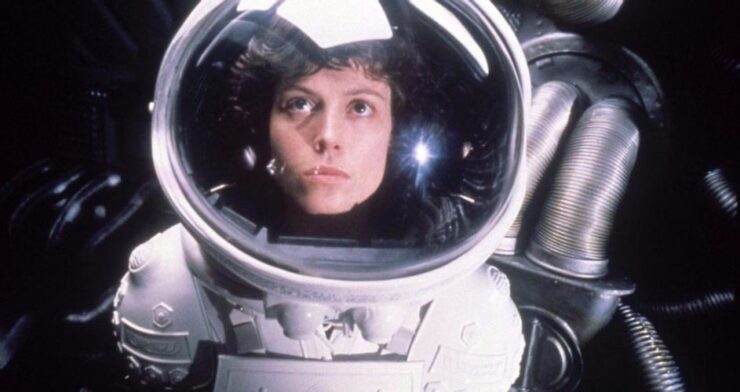 In doing so, she becomes the most protected and armored that viewers see her in the entirety of the movie. She recognizes the level of threat, and knows that the plan she has to survive this encounter requires her to be as ready as possible to face the alien and see her last shot at survival through. She is clearly and understandably still afraid, but Ripley maintains her composure long enough for her last stand. Boldly turning her back to the alien, she straps herself to the ship and opens the hatch, sending the alien flying into space.

Finally, truly safe, and in spite of the horrors and loss she faced, Ripley appears in the next scene looking much like she did at the beginning. Her clean, curly hair is down and she is dressed in white garments. With the life boat secured and the Nostromo gone, she has no more need of space suits or uniforms. Ever the professional, she provides a final report on the fate of the Nostromo before returning to hypersleep.

The original Alien film, along with the entire franchise, is hailed as some of the best space horror and feminist sci-fi created. Ellen Ripley is the perfect protagonist for the series as she embodies strength and courage, as seen above, and the Alien Queen of the later films is a legendary horror monster in her own right.

Which Ellen Ripley moment stands out most to you? Let us know in the comments and don’t forget to Let Your Geek Sideshow!