“Coming out” is both a monumental act of bravery and a lifelong series of moments every queer person faces. Claiming your identity as your own is validating and empowering, but also never ending. Of course there’s the initial proclamation made to family members or close friends, but there are also the tiny coming outs — in line at the grocery store, with the person next to you on an airplane, speaking with coworkers in the break room.

They’re all significant, big or small, and some of them are far from perfect, but they’re all worthy of celebration. From long-awaited kisses that confirm decades of speculation to entire anthologies, coming out stories are becoming more prevalent in our media. That’s why this article collects some of the most significant coming out stories from across the world of comic books and graphic novels. We all deserve to be celebrated, whether it’s Pride, National Coming Out Day, or a perfectly normal day in April. So let’s start today. 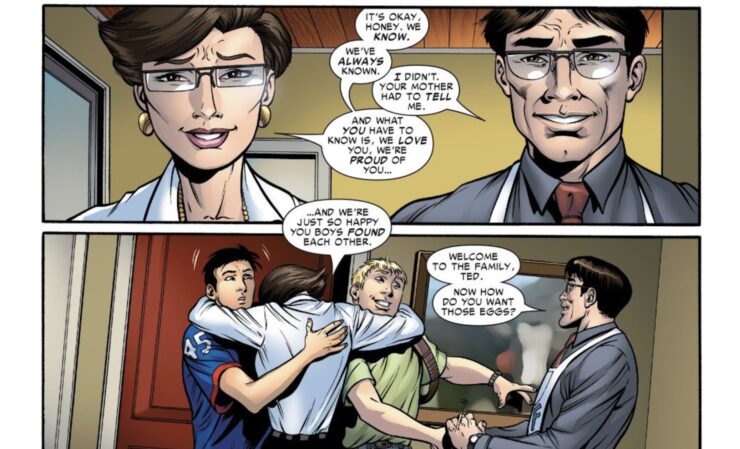 The quintessential coming out story revolves around a teenager speaking to their family about something they’ve kept hidden. Sometimes, the situation even involves a partner being brought home. But for Hulkling and Wiccan, Marvel’s intergalactic power couple, their main priority is coming out to their families about being super heroes. As Billy attempts to start the conversation with Teddy at his side, telling his parents that he has powers, his mom and dad gleefully interrupt to say how much they love him and to welcome Teddy into the family. This scene, in its joyful acceptance and unexpected humor, will be remembered as a highlight of Marvel storytelling for years to come.

Batwoman, “How Queer Everything Is Today!” 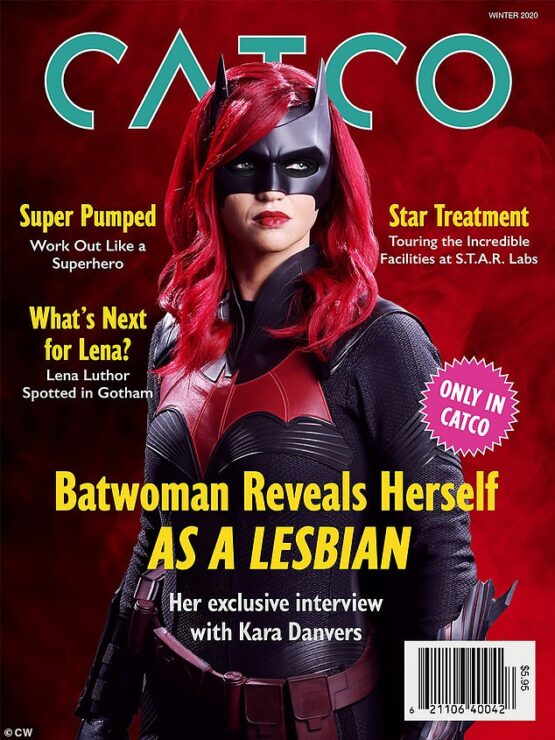 Coming out privately is an immensely different experience than coming out publicly. Celebrities, or even super heroes, know that their every action will be scrutinized. For Kate Kane, who is unapologetically out in her personal life, it’s a difficult decision to reveal that Batwoman is lesbian to Gotham City. Her public image is already tenuous and she fears losing whatever support she might have from Gotham’s people. But then Batwoman encounters a teenager whose parents don’t accept her queer identity, and Kate finally sees that through Batwoman she can create a powerful role model. With that, Batwoman gives an interview to Kara Danvers, AKA Supergirl, and her coming out story is featured on the cover of CatCo magazine in this season 1 episode of Batwoman.

When I Came Out by Anne Mette Kærulf Lorentzen 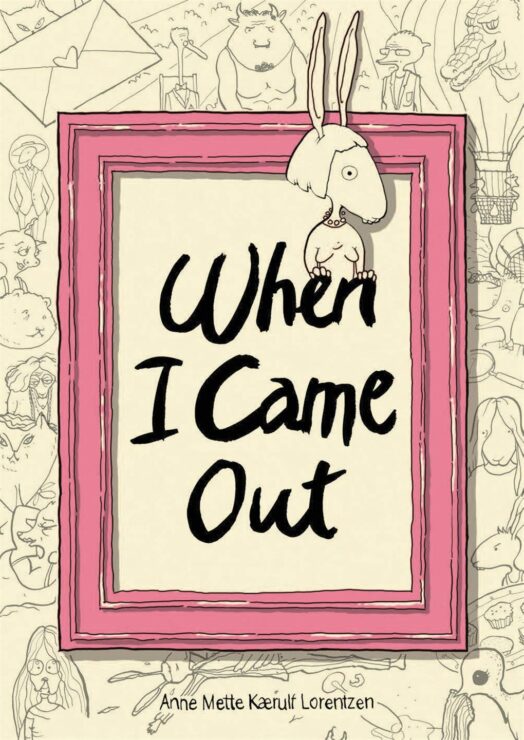 Often we think of coming out as a big announcement to the world — bursting into a conversation with rainbows flying everywhere. However, the first step is coming out to yourself, at any age or stage of life. Lorentzen’s graphic novel explores how coming out can also be a lifelong journey with ourselves, a series of steps that make sense when you finally string them all together. 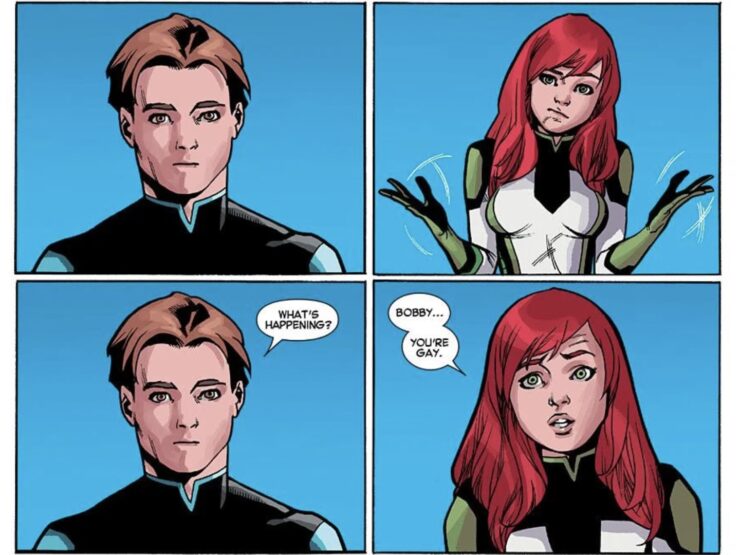 As many have pointed out, Bobby Drake’s coming out story has its flaws. Putting aside the complications of time travel and two versions of each original member of the team, All New X-Men #40 is noted for the revelation that Iceman is gay. In this scene, Jean Grey uses her telepathy to call out Bobby on a part of his identity that had previously only been hinted at, something even he hadn’t fully reconciled within himself. There is a lot of nuance lacking in this interaction, such as Bobby’s reaction to Jean’s probing as well as the assumption that there is only gay or straight. However, we also see the unfortunate reality that sometimes queer people don’t get to come out on their own terms.

Marvel’s original gay super hero, Northstar, is a member of Canada’s Alpha Flight and his wedding to husband Kyle was also a first for Marvel. But before all that, Jean-Paul Beaubier was an embittered, hot-tempered, slightly dislikable hero. His creators, John Byrne and Chris Claremont, have also noted they always wrote Northstar with his identity in mind; unlike other characters, he didn’t need to be retrofitted as gay. Alpha Flight issues contained many hints but it wasn’t until Alpha Flight #106 that Northstar officially came out. Major Mapleleaf, whose son was also gay and had died of AIDS, is angry at Northstar for the positive attention he’s received for adopting an infant with AIDS. During battle, Northstar says the words “I am gay” to Canada’s first super hero, prompting an important dialogue about representation. 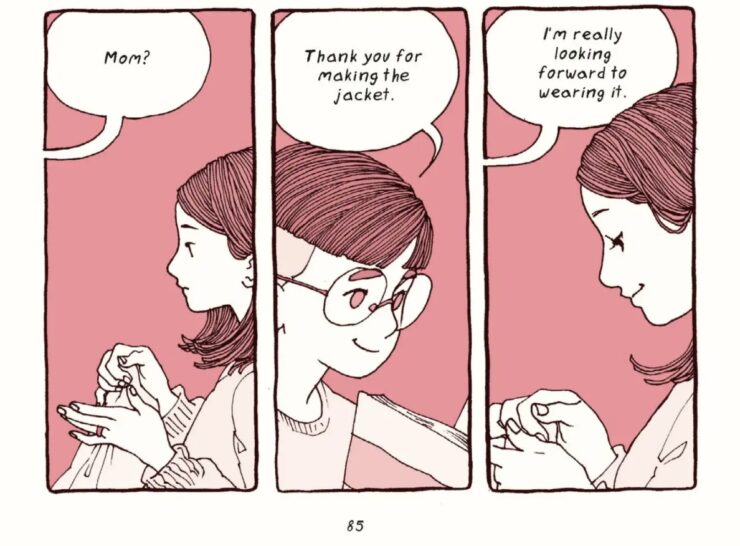 The decision to come out to family and friends is scary because we can never predict the reactions of those we care about. But Magic Fish, in its interwoven storytelling and dreamy panels, captures the distinct anxiety around these pivotal moments. Tiến wants to tell his mom and his friends about being gay, but he struggles to overcome language barriers as well as his own fear. Nguyen’s story is at once whimsical and bittersweet as we see the hidden parts of a mother and son rise to the surface and meet in a swirling tale of acceptance. 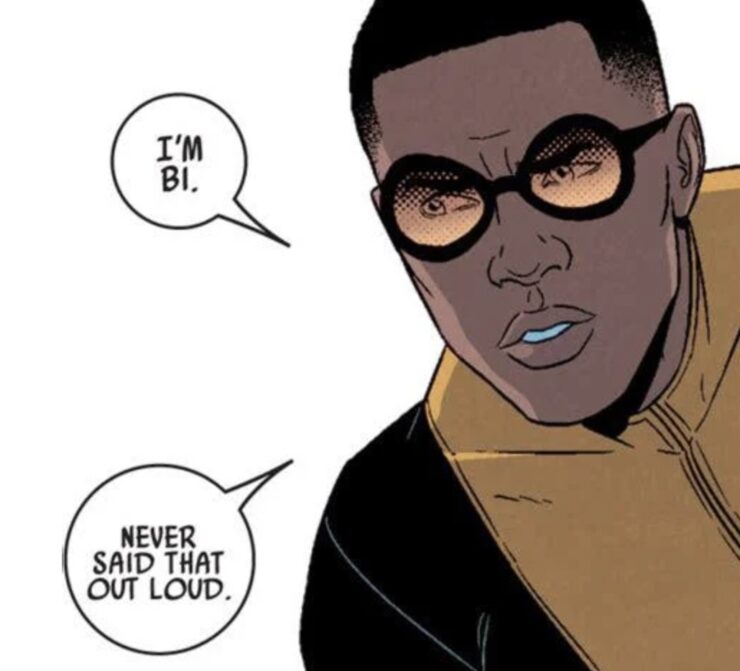 Similar to Tim Drake’s recent realization that he has feelings for someone he had thought was just a close friend, Prodigy undergoes some self discovery. When he joins the Young Avengers on a dimension-hopping escapade, he winds up stuck alone with Hulkling while the rest of the team is elsewhere. Though his display of affection is slightly misguided, Prodigy, in typical Prodigy fashion, explains his line of thinking very eloquently: “It was like realizing something that was always true and I just couldn’t see it until now. It was like all the rooms in my head opening.” 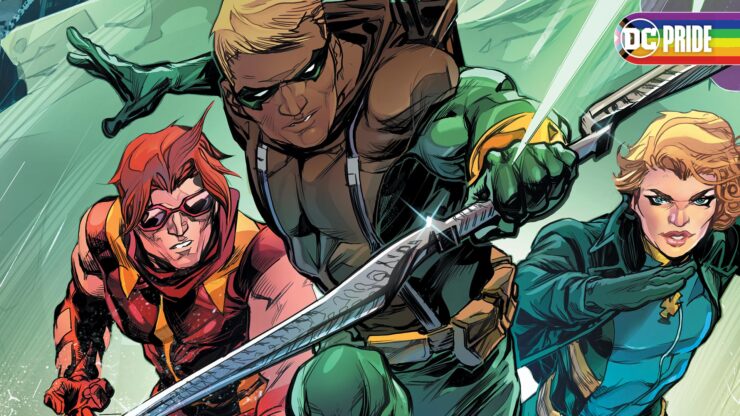 Connor Hawke is the son of Green Arrow, a famed member of the Justice League in DC Comics. On his own, however, Connor is impressive enough — he is one of the few fighters in the world who can match Lady Shiva. Over the years, a different fight was going on under the surface. Connor had long struggled to understand his identity, even facing light ridicule from Roy Harper as shown on the DC blog. But this year, in DC Pride 2022, Connor comes out as asexual to his mom in a letter. His words describing the journey to embrace his ace identity are heartfelt, genuine, and a more than welcome addition to the DC queer family.

In the third episode of Marvel’s Disney+ series Loki, the god of mischief and his wayward variant engage in an unexpectedly affecting conversation about love. Amid all the witty banter, Loki and Sylvie muse on what love really is — could it be hate, or mischief, or even something too “real” to possibly define with words? Sylvie prods Loki about whether he has a princess or prince waiting for him back home, and Loki displays his charming vulnerability as he confides to Sylvie that he has looked for love from “a bit of both.” The scene is intimately shot from right next to their booth and their surroundings are cast in ultraviolet bi lighting, making Loki’s coming out moment both heartfelt and cheeky.

The Wicked + The Divine: Fandemonium by Kieron Gillen and Jamie McKelvie 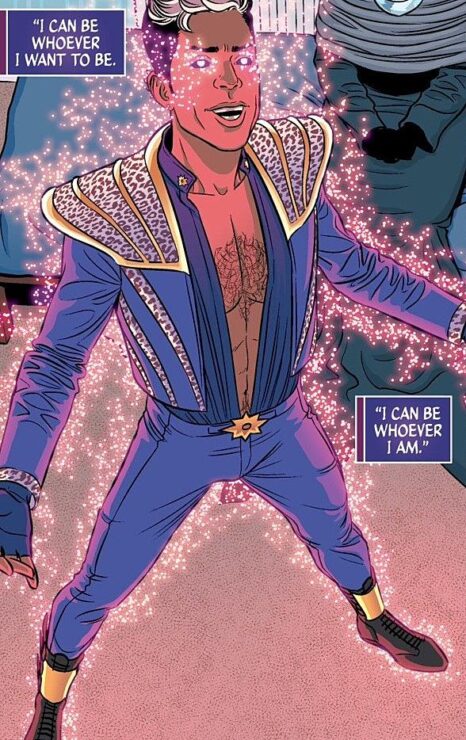 With story arcs that draw from multiple mythological pantheons, The Wicked + The Divine is able to explore the many ways in which people express themselves. The characters are deities who are reincarnated every 90 years and nearly every one of them is queer in some aspect. And sometimes, a person’s mere existence is an act of coming out. Inanna, a Sumerian goddess, proclaims in Vol. 2 Fandemonium, “I can be whoever I want to be.” Their nonbinary identity thrives upon the fluid spectrum of divinity, and Inanna is all the more powerful for it. 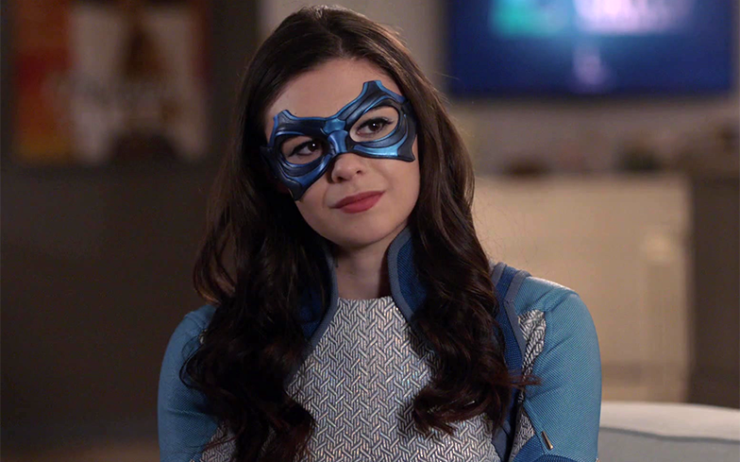 On Supergirl, a completely new (to screen and comics) hero is introduced in season 4 with Nia Nal, AKA Dreamer. Nia’s mother is from the planet Naltor and her father is a human of Earth, making her the first alien-human hybrid in the Arrowverse. Her oneiromancy, or the manipulation of dreams, allows her precognition, astral projection, and energy manipulation. However, Nia is also significant because she is transgender and the character is portrayed by trans actress Nicole Maines. Nia first comes out to her boss, James Olsen, while reporting on anti-alien attacks for CatCo and then, as Dreamer, she gives a TV interview to Kara Danvers where she comes out as both an alien-human hybrid and a trans woman. Nia’s story is especially meaningful because her being trans is just one aspect of her persona; her identity has given her empathy and strength, but she is also so much more than just one label.

Coming out looks different for everybody, super hero or not. Sometimes it is a tense moment, a few words finally, bravely, quietly uttered to someone else. Or it can be more of a process, a drawn-out realization. No matter how they look, coming out stories deserve a proud place on bookshelves and webpages and movie screens. They are one more way for our storytelling to reflect our reality: complicated, dramatic, subtle, and beautiful.

What’s your favorite coming out story in a comic book or graphic novel? Did we miss one? Let us know in the comments and don’t forget to Let Your Geek Sideshow!