If the Shulkie shoe fits, you better believe we’re gonna be wearing it! At least, that’s the motto of one of Jennifer Walters’ closest associates at GLK&H, Augustus “Pug” Pugliese. While Pug and Nikki Ramos curate the perfect super-outfit for She-Hulk in episode 5, we get a glimpse of Pug’s impressive super-shoe collection in the show’s credits artwork.

First, we’ll kick it off with a quick look at who Pug is in the Marvel comics, and then we’ll get right to it with a list of the heroes we’re likely shown in shoe form! 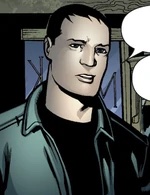 Pug carries himself with a charming, slightly dorky yet lovable demeanor on the show. In the comics, he and Jen share a similar friendly dynamic. Just like on She-Hulk: Attorney at Law, they’re coworkers at GLK&H in the superhuman law department.

On the page, Pug also has a Hulk-sized crush on his coworker, though nothing much comes of it. Their working relationship first started thanks to Spider-Man’s libel case again J. Jonah Jameson. Later, Pug seeks help from Morgan Le Fay’s wicked sorcery to undo his feelings for She-Hulk — and as we all know, Marvel magic is tricky, especially from a treacherous super-villain like Morgan. Better stick to the shoes, Pug!

In the forefront of the end credits image, Pug shows off those limited edition Iron Man Threes he wanted to stand in line for. One per customer — and he and Nikki got ’em! We couldn’t be prouder. But who are the other Marvel characters featured in Pug’s super hero shoe collection? (The ones he stores, of course, not the ones he wears.) The answer to that question might just surprise you.

Some of Pug’s shoes don’t just have designs from MCU characters we’ve already seen. We’ve also got comic characters from teams like the Fantastic Four and the X-Men. That’s incredibly surprising, as it could hint to how the Marvel Cinematic Universe is destined to grow in the coming years. Or it could just be a fun nod to the source material. Whatever the reasoning behind this art panel, we love it. 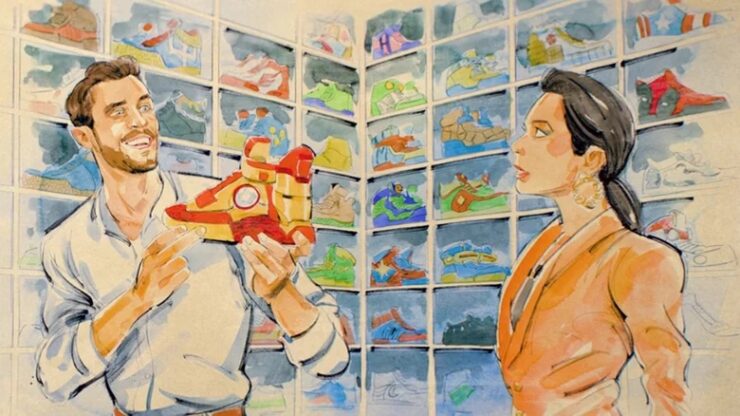 Play “I Spy” with us at the 25:32 marker in She-Hulk: Attorney at Law season 1 episode 5, “Mean, Green, and Straight Poured into These Jeans” to find all the comic characters! Kagan McLeod’s art during the She-Hulk credits makes creative use of color schemes plus iconic symbols and imagery to hint at various heroes and villains from throughout the Marvel Multiverse.

Some of the inclusions are definitely more of an eyeful than others (‘sup, Scott Summers?). However, they’re all exciting to uncover thanks to McLeod’s gorgeous art! Of course, some are more speculation than others, but it’s still fun to look.

Once you’re done scouring the shelves on your own, check out our handy list of identifiable shoes in Pug’s collection.

Did you catch all of these references? Some of the characters are more significant to She-Hulk’s story than others, but all of them are integral Marvel heroes and villains that are part of Jennifer Walter’s long list of friends and foes.

Now if only they’d finally release those Madisynn heels and some Avongers kicks.

Which of Pug’s shoes do you most wish you could collect? Brag about your own special kicks, super-powered or otherwise, in our Atomic Misfits Facebook Group, and don’t forget to Let Your Geek Sideshow!