If we could have any super power in the world, we would quite like the ability to speed-read multiple layers of hidden messages, habitually hidden in movie posters, since our current efforts to crack these codes often ends up in an epic-style Hulk out.

However, once we have de-greened and returned to our senses (Spidey or otherwise), we soon realize that we can actually push ourselves higher, further, faster to find these Easter eggs, especially when they’re concealed in the promo material for some of our favorite comic book capers.  With a slew of superhero one-sheets in circulation year after year, we have now become accustomed to placing them under a spotlight that shines brighter than the Bat-Signal, giving us the opportunity to pick out any well-hidden secrets or clever details.

So, for those of you that offer no more than a quick glance towards these prints as you’re passing through the multiplex foyer or only give them a split-second side-eye as you’re skimming through an article, here are the top five Easter eggs you might have missed in superhero movie posters. 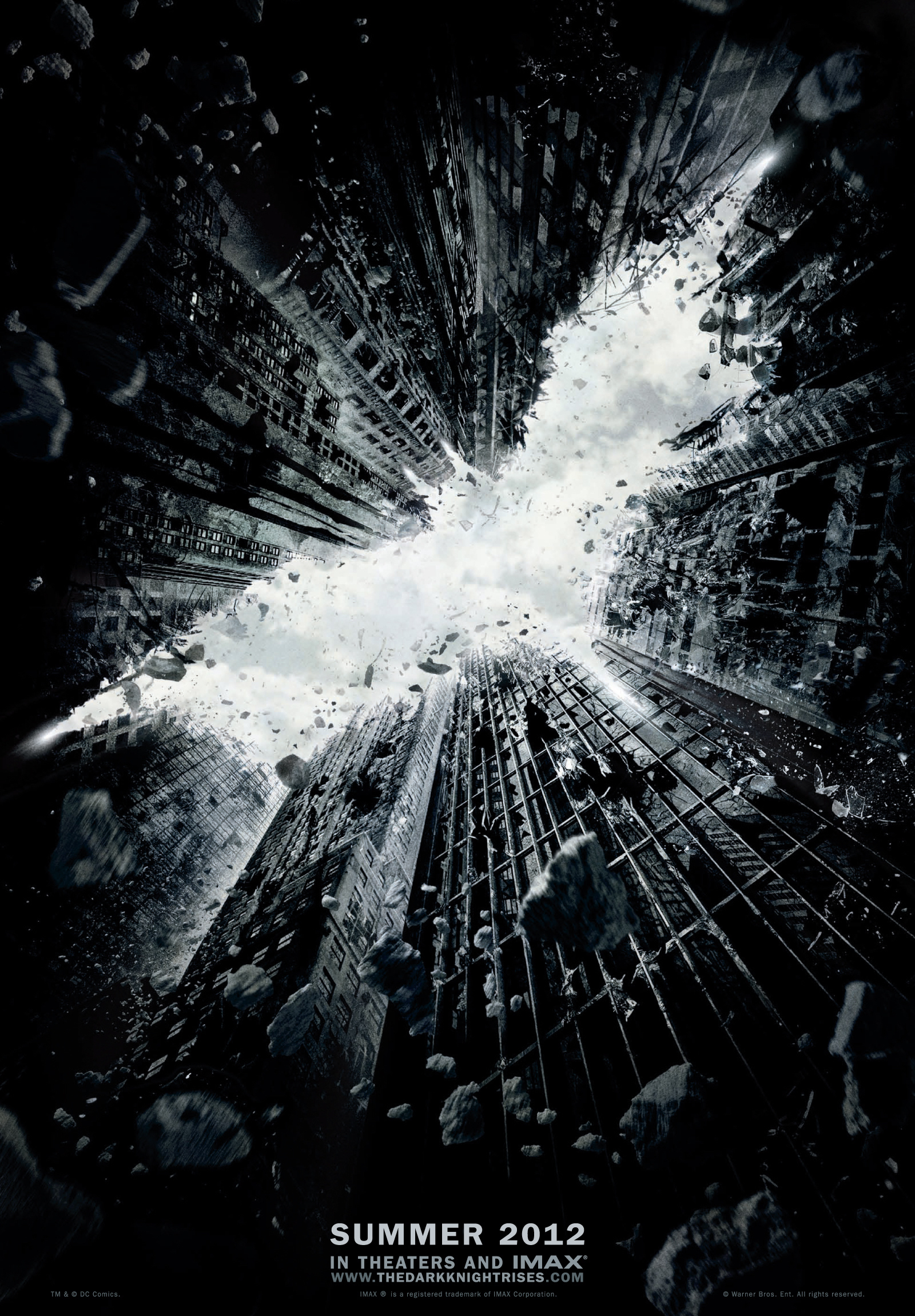 In 2012, promo material for The Dark Knight Rises was pumped out faster than a speeding bullet as anticipation built towards the epic final installment in filmmaker Christopher Nolan’s Batman trilogy.

Capes aside, the first official poster for the trilogy-capper was shrouded in mystery at the time of its issue as an eagle-eyed fan unearthed an Easter egg that seemed to suggest a connection to the Christopher Nolan-produced Superman reboot, which was slated for release the following year.

At first glance, the simplistic design of the poster places the beloved Batman logo at the center of the image, as the surrounding skyscrapers crumble down around the iconic symbol. However, if you take a closer look in the shadows, it becomes apparent that it may not be the only superhero logo on the poster.

One devoted bat-buff at ComicBook.com alleged that the famous Superman logo was hidden within the falling debris. If one zooms in on the remains, the familiar “S” shape appears to be tucked away in the lower bottom half of the poster, disguised as a blurry piece of rubble on the far-left. 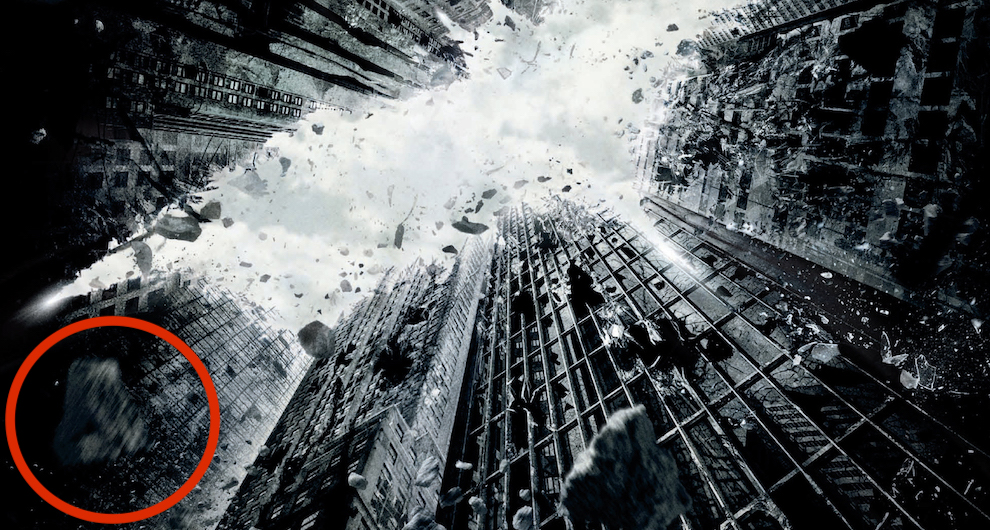 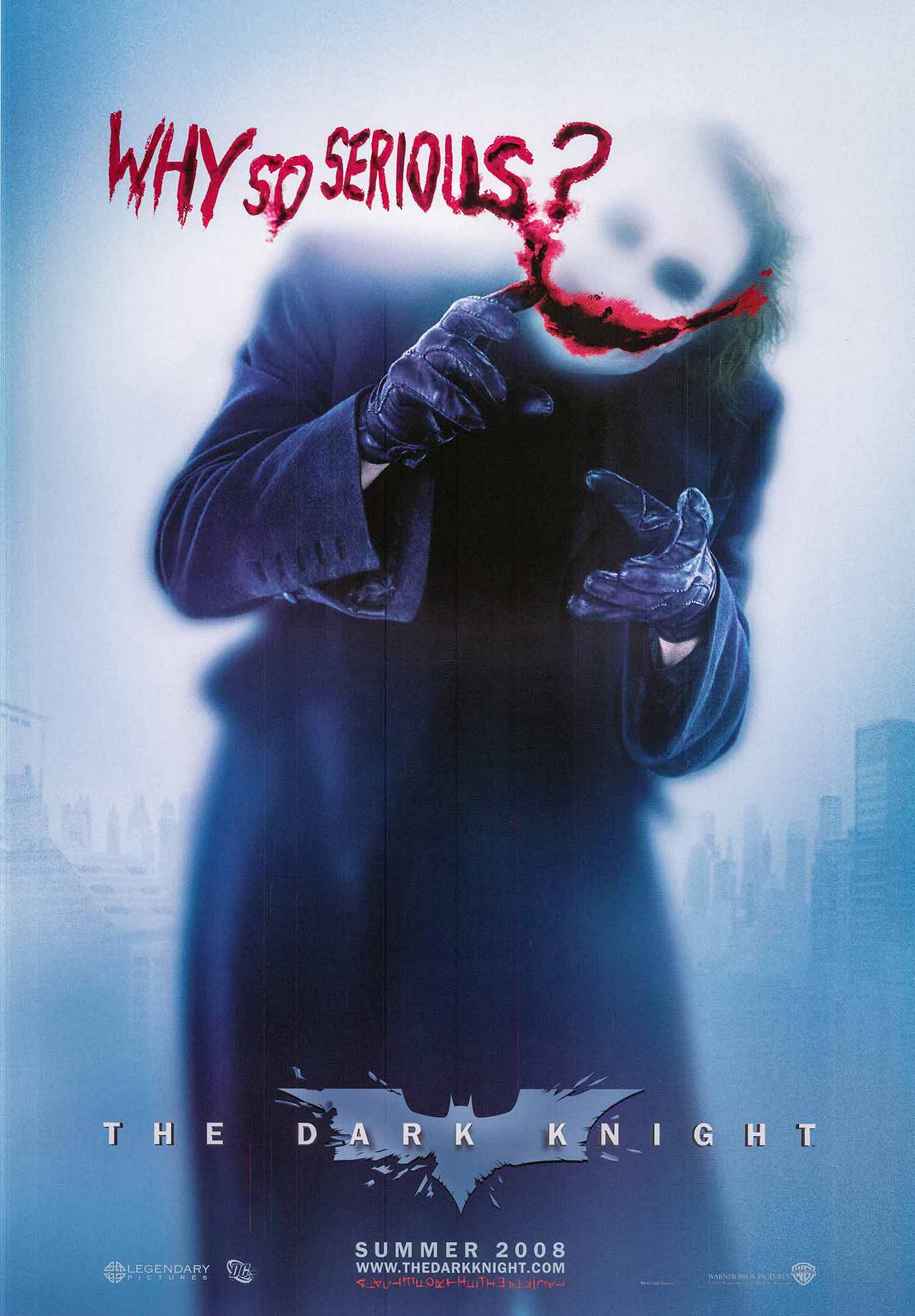 No joke, the viral marketing campaign for The Dark Knight should be considered the gold standard when it comes to interactive and immersive promo material, as it generated an unprecedented level of buzz and anticipation amongst fans at the time.

Dashing through the theater with a bucket of fresh popcorn in one hand and an enormous soft drink in the other, many moviegoers might have missed the coded message placed in The Joker’s character poster, but others put on their Detective Gordon hats to study the image with a magnifying glass.

The cryptic catchphrase is positioned discreetly at the bottom of the poster, below the “Summer 2008” caption. When the faint text is enlarged and the individual red letters are flipped and rearranged, it reads: “A Taste For The Theatrical.”

Using the same words, fans could visit a now-defunct website that featured a Gotham Times classified ad, teasing the release of an upcoming trailer. Those who returned to the link on the correct date would be rewarded with an early viewing of the high-definition preview. 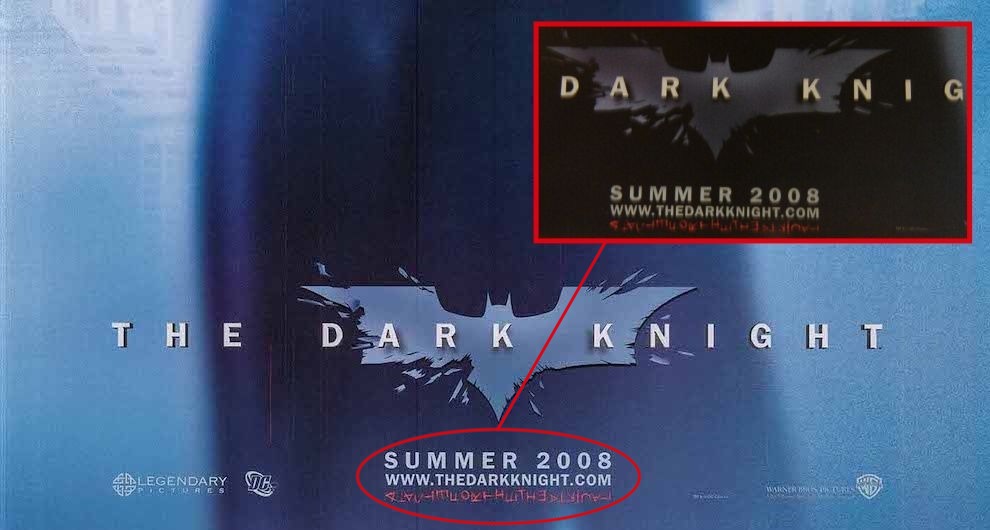 We’re so serious about this. 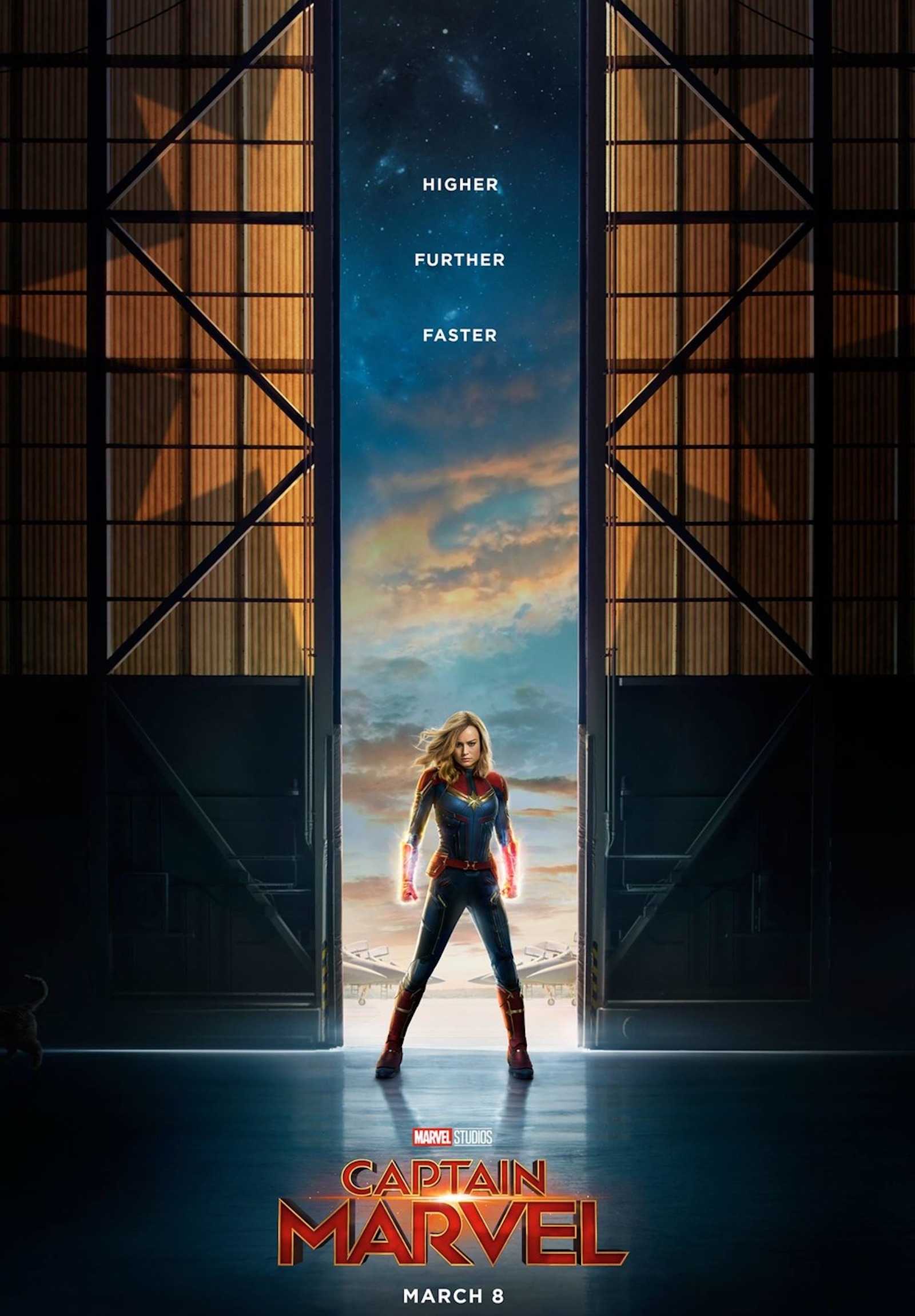 The official one-sheet for Captain Marvel, Marvel Studios’ first female-led superhero movie, certainly packed a punch and gave us something to chew over while we furiously counted down the days to its theatrical release.

It takes some serious zooming and enhancing to find the Easter egg in the Captain Marvel poster, featuring the titular character standing front and center with her fists charged with cosmic energy, but eagle-eyed observers were quick to spot the pint-sized pet cameo hidden in the frame.

Shrouded in the shadows, the feline can be seen sauntering through the airplane hanger in the bottom left corner of the image. Now to some, this may be nothing more than the back-end of a mystery moggy, but to diehard comic book fans, the concealed cat holds a much greater significance.

In the Marvel Comics, Carol Danvers travels through the galaxy with a furry Flerken, who goes by the name of Chewie, an alien creature resembling one of Earth’s house cats. In the movie, however, the otherworldly creature is given the alternative nickname Goose, as a reference to the 1980’s blockbuster Top Gun. 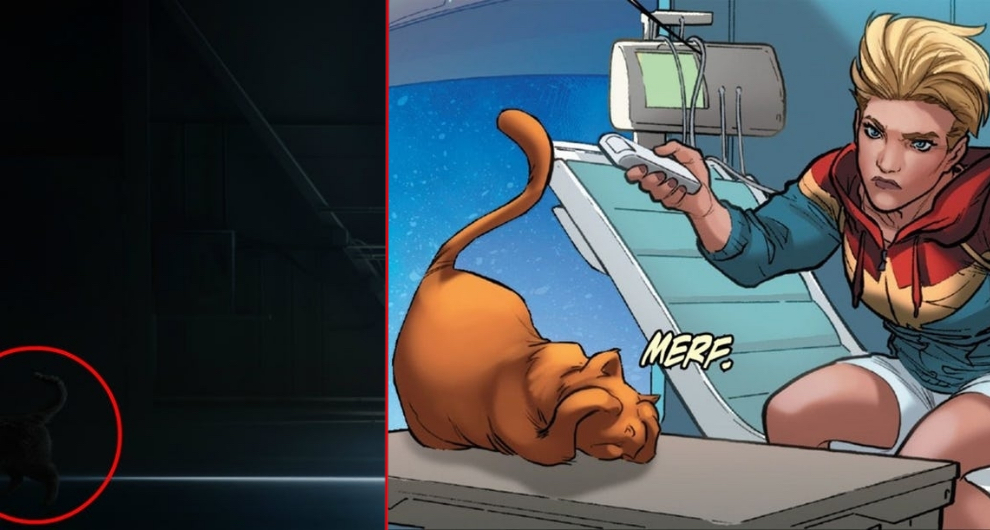 Anyone else got Goose-bumps? 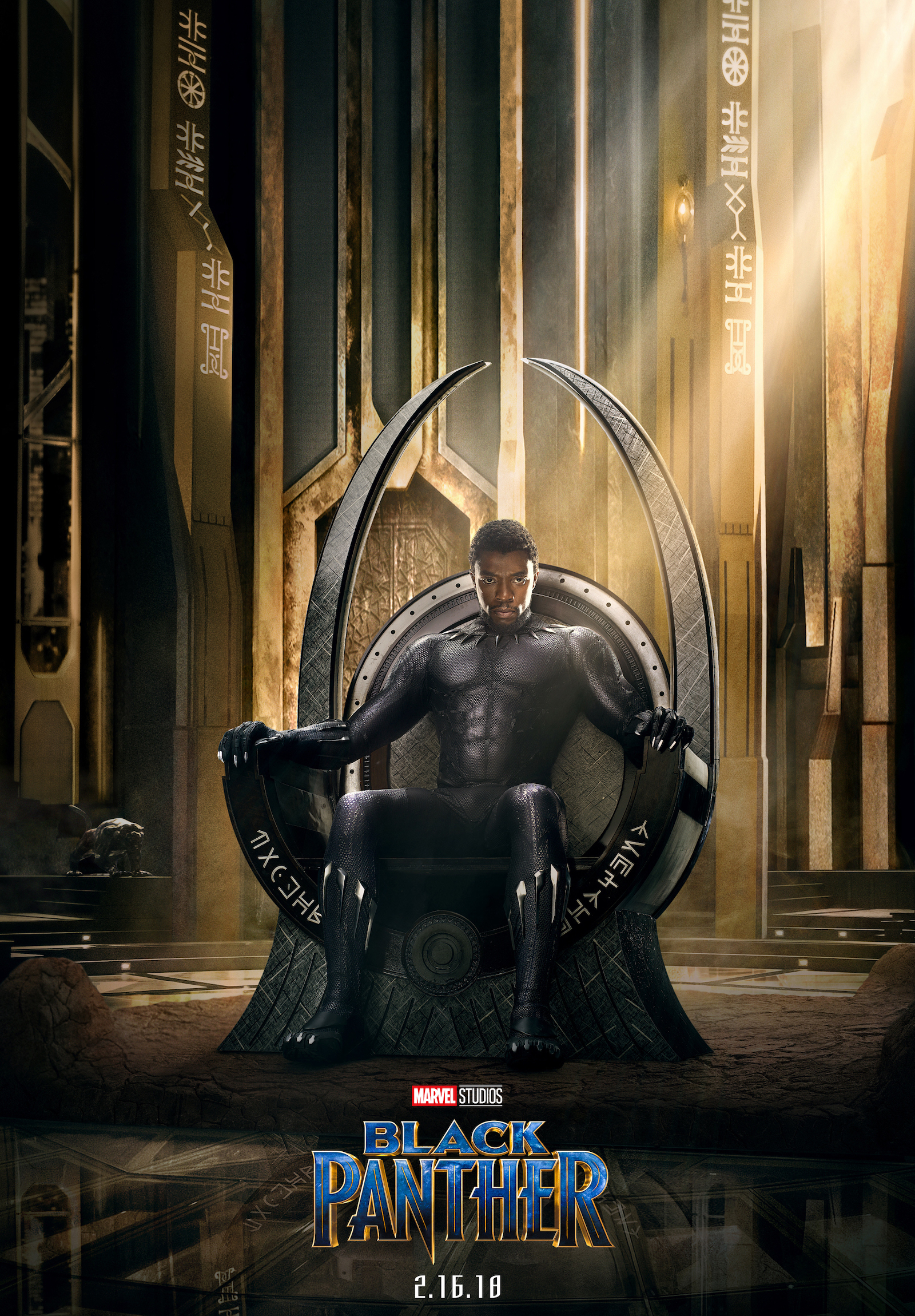 From his direct stare into the depths of our souls, to his futuristic leather body suit and rock-solid stance, Chadwick Boseman as T’Challa (aka Black Panther) certainly commanded our attention in this poster for Ryan Coogler’s superhero box office hit.

Beyond the obvious, some astute observers pointed out another important element in the picture. It appears that T’Challa, who is seated on a regal throne, is emulating the position and expression of Huey P. Newton, co-founder of the Black Panther Party.

Even though Marvel’s character name predates the Black Panther Party by several months, there are some irrefutable similarities between the recent movie poster and the early poster for the revolutionary political organization, in which Newton is defiantly poised in a wicker chair.

In comic book history, the Black Panther is notable as the first African American superhero introduced to a mainstream audience, so we wouldn’t be surprised if T’Challa and Newton had purposely been connected, as two important figures with indelible legacies. 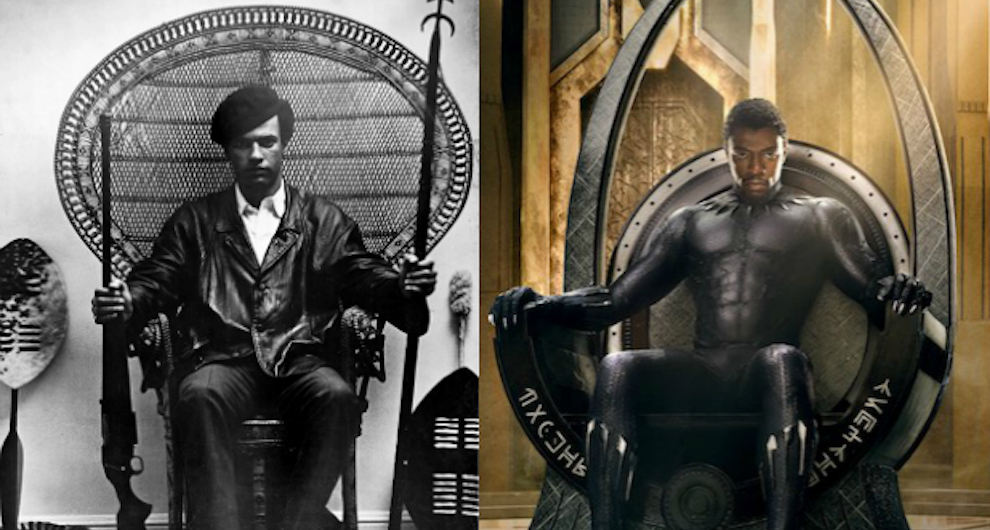 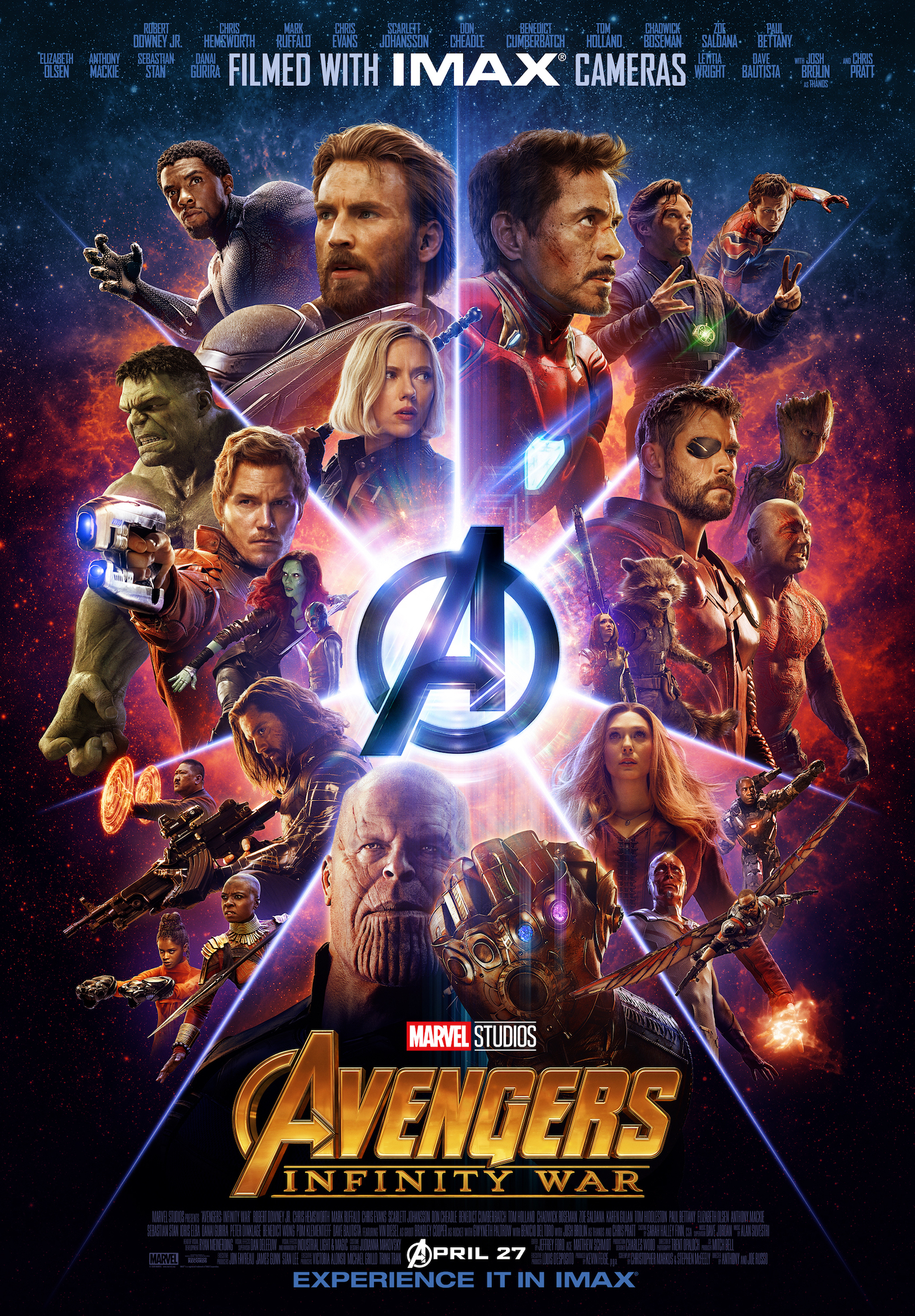 The Avengers: Infinity War IMAX poster teased fans with a quest, as shortly after its release, it was revealed that the exclusive theater artwork contained visual secrets, certain to make even the most expert Easter egg hunters snap.

The challenge was made more difficult by the fact that the poster assembles practically every major character in the MCU, from Captain America and Iron Man to Black Widow and Scarlet Witch, situated around the distinctive Avengers logo as a focal point.

Following a number of internet theories, one Reddit fan managed to locate the four IMAX logos hidden in the poster, serving as a further piece of promotion for Infinity War, the first Hollywood blockbuster to be shot entirely with IMAX 65mm cameras.

In recognition of this landmark production in cinematic history, the IMAX company name can be spotted repeatedly scrawled between the stars in the orange cosmic space energy surrounding “everyone’s favorite superheroes.” 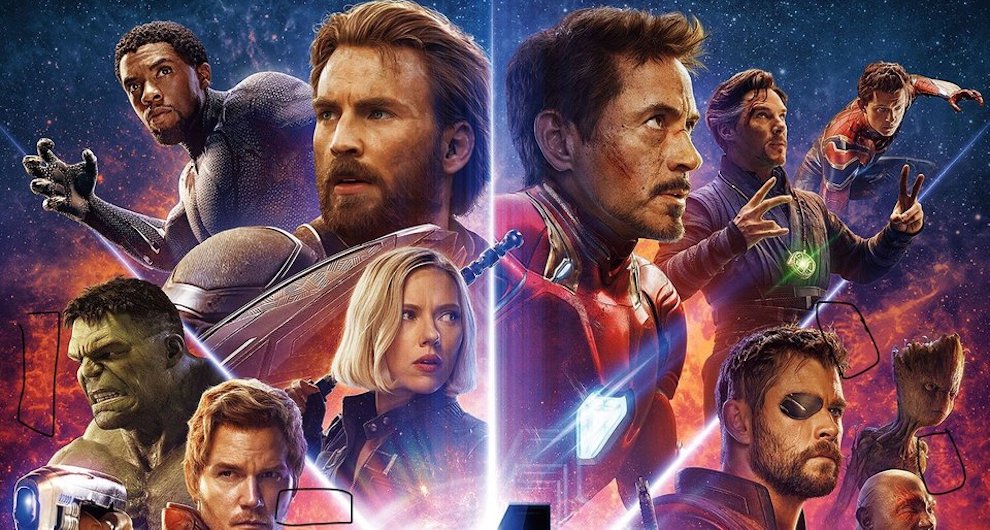 Max-imum effort on this one!

Did you already know about any of these references? Did we leave out one of your favorite superhero movie poster Easter eggs?