Superheroes (and Villains) Who Started in Horror Movies

As you’re gearing up for Halloween and binging on horror movies all week long, consider this: why is it that so many major actors started out in horror movies? Is it because the horror genre is often the bottom rung on the long climb up to silver-screen stardom, or is it that horror producers and directors are more willing to take risks on relatively unknown actors?

Whatever the case, here are 10 recognizable superheroes (and villains) who got their big break in a horror movie:

Before he was Batman, before Good Will Hunting—even before he was Bennifer—Ben Affleck had a small uncredited role in what would become a big cult-classic, Buffy the Vampire Slayer. This 1992 tongue-in-cheek horror movie written by Joss Whedon featured some heavy-hitting 90’s stars like Luke Perry and Kristy Swanson.

However, Buffy also introduced us to some fresh-faced new actors like Hilary Swank, David Arquette, and yep, Ben Affleck, starring in his unforgettable debut: Basketball Player #10. In the scene, Affleck delivers his line and then awkwardly passes the basketball to a teenage vampire threatening him with a fresh set of blood-sucking incisors. Affleck shows up in a couple more scenes on the court, but ultimately goes unseen beyond that.

It’s interesting that, considering his aversion to vampires on the court, Basketball Player #10 would go on to become rather fond of bats later in his acting career… 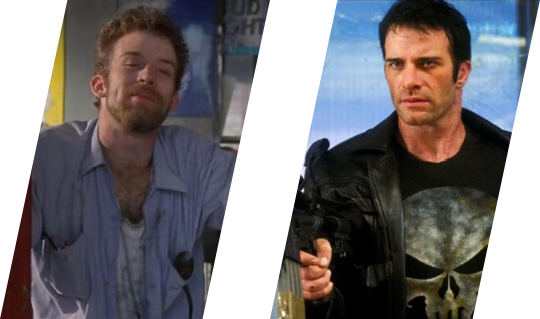 In addition to Hilary Swank and Ben Affleck, Thomas Jane is another Buffy the Vampire Slayer alumni. Thomas Jane played Zeph, a friend of Luke Perry’s character Oliver Pike (which is a not-so-subtle name for an amateur vampire slayer). Jane only had a few small credits to his name by the time he landed a role in Buffy, but he later went on to star as a slayer in his own right in 2004’s The Punisher.

There are those who do not believe The Punisher lived up the the standards that would be set by future Marvel titles, you have to admit, Thomas Jane racked up a kill count in that movie that even Frank Castle would be proud of. And it takes a certain kind of renegade to tie John Travolta to a car and blow him up in a skull-shaped inferno.

And now it’s time for a bad guy. No, not Kevin Bacon. We’re talking about Sebastian Shaw, the Nazi supervillain portrayed by Bacon in X-Men: First Class. Kick-Ass director Matthew Vaughn reportedly selected Kevin Bacon because the actor had the ability to portray both good and evil in tandem. Could Bacon have absorbed some subtle darkness from a brush with evil early in his acting career?

Long before he was brained by Magneto with a slow-motion coin through his skull, Kevin’s bacon got sliced by none other than Jason Voorhees in the original Friday the 13th (okay, technically it was his mom). This proves there are actually less than six degrees of separation between Friday the 13th and X-Men. There is only one: Kevin Bacon.

Although she held a handful of lead acting credit before she debuted in a horror movie, Black Widow has a long history with spiders…in this case, giant spiders. Johansson starred in the campy Eight Legged Freaks in 2002, when she was eighteen. The movie was a throwback to the radioactive sci-fi/horror flicks from the 50’s, in which nuclear waste commonly mutated spiders into giants that ravaged small towns.

Johansson played opposite David Arquette and Kari Wuhrer (who also starred alongside another massive predator in Anaconda). The film didn’t reach a wide audience, probably due to the numerous other “killer mutant animal” movies like Anaconda, Arachnophobia, Tremors, and Lake Placid that saturated theaters in the previous decade.

Despite the reviews, Johansson showed real promise while combating giant spiders, and that skill set would go on to benefit her when she joined up with the Avengers in 2012.

Years before arriving on Asgard, Idris Elba had established himself in the horror genre with a series of small roles. First, as Ben in 2007’s The Reaping, alongside Hilary Swank (seriously, everybody is connected to Buffy the Vampire Slayer). Also in 2007, Elba starred as General Stone in 28 Weeks Later, the sequel to Danny Boyle’s iconic zombie twist, 28 Days Later. He landed another role the next year in Prom Night (2008) as the savior Detective Winn.

And after he landed his role in the Marvel universe as Heimdall, Elba returned to his roots in horror in the 2017 adaptation of Stephen King’s The Dark Tower. Though the film may have bit off more than it could chew in one movie, Elba did a good job filling the boots of Stephen King’s beloved character Roland Deschain.

And now for another bad guy…It may be a stretch to consider Once Bitten an outright horror movie, but Carrey’s first major movie role pitted him (somewhat hilariously) against a swarm of hungry Hollywood vampires. Carrey delivers his performance much as you might expect: complete with ridiculous contortion humor, including a dance number in which he uses his whole leg as a guitar during a righteous guitar solo.

While more people would come to know him after Ace Ventura, Carrey had no problem slipping into green spandex to play The Riddler in 1995’s Batman Forever. As per usual, he steals every scene that he’s in…

While many people would credit 1995’s Clueless as the first time we were introduced to Paul Rudd’s uncannily boyish looks (he must be a vampire—he simply does not age), a smaller audience might remember that in the same year, Rudd landed another big role in the 6th installment of the Halloween franchise: Halloween: The Curse of Michael Myers. The future Ant-Man was still a pretty small player when he was cast in Halloween, starring as Tommy Doyle, a strange loner obsessed with Michael Myers’s killer legacy.

The character of Tommy Doyle appears as a child in the original Halloween movie, but when the producers couldn’t get in touch with the original actor, they discovered Paul Rudd and put him in the role. Rudd’s reprisal of the role is all is own. Given what we know now of Rudd’s patently sarcastic humor, it’s hard to tell if he’s trying to play it straight or he’s on the edge of laughing as he holds a baby in his arms and tells Michael Myers, “You’ve won.” (If this description just piqued your interest, I strongly suggest you watch it for yourself. If not, I strongly suggest you watch it for yourself).

Before she was in Kick-Ass and taking names as Mindy McCready, aka Hit-Girl, Moretz played Ryan Reynolds’ daughter in the 2005 remake of The Amityville Horror. She was only six-years-old when she took the role, and showed promise as an actress beyond her years. Though it might be a stretch to place Hit-Girl on a list of superheroes, there’s no denying the ass-kicking performance Moretz gave in the movie.

And she later returned to horror in the 2013 remake of Stephen King’s Carrie, proving she’s just as lethal as ever. On a side note, The Amityville Horror also features the darker side of a pre-Deadpool Ryan Reynolds, but since he’d secured a handful of leading roles before Amityville, he didn’t quite make the cut on our list.

And for our last bad boy on the list: Liev Schreiber. One of Schreiber’s earliest and more recognizable roles was in the slasher movie that upended the genre. Scream (1996) proved Wes Craven still had what it took to dominate horror in the 90’s as well as the 80’s. And though Schreiber’s role was somewhat small in the movie, the entire plot-twist hinged upon his character, Cotton Weary.

Pinned as the murderer of Sidney Prescott’s mother, everyone in town is led to believe Schreiber’s character is the killer. While Schreiber was able to shed his bad reputation by the end of the movie, he reclaimed his “bad guy” status when he starred opposite Hugh Jackman in 2009’s X-Men Origins: Wolverine as Logan’s afflicted half-brother Victor Creed, aka Sabretooth. 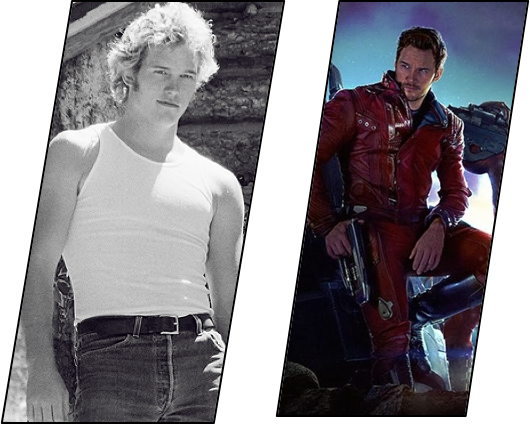 Last on the list is a relatively new face in the crowd of super-famous superheroes. Chris Pratt’s career has exploded in the last few years, but like the others on our list, he came from humble beginnings. While turning tables like so many young actors, Pratt was approached in 2003 by Rae Dawn Chong to star in her low-budget horror/comedy Cursed Part 3. Only 19 at the time, Pratt jumped at the opportunity and the rest is history…literally.

It was impossible to find a digital copy of Cursed Part 3, but a short trailer online revealed an even lower-budget version of The Blair Witch Project, which was apparently the movie that Cursed attempted to spoof. With Pratt acting like—well—a 19-year-old kid cracking jokes, it appears Star-Lord’s sense of humor didn’t evolve much since Cursed Part 3…but we all know his paychecks sure did.

There must be more superheroes (and villains) out there who got their start in horror movies. Did we miss any? Let us know in the comments, and don’t forget to Let Your Geek SideShow!

Superheroes cross the (rainbow) bridge between films quite often- be sure to check out our list of Marvel’s Thor actors who are known for their starring roles in science-fiction media.