As you might imagine, dragons figure prominently into the lore of Dungeons & Dragons. D&D’s publication history stretches back more than four decades, into the early 1970s. During that time, many dragons have appeared as characters in official sources of lore from various editions. These sources include monster manuals, campaign setting sourcebooks, adventure modules, novels, video games, and even cartoons.

Dragons are intelligent, magical creatures that can live well over a thousand years. Many can cast spells, and some even can shapeshift into the form of another creature. A dragon’s personality and physical attributes — including its type of breath weapon — correspond to the color of its scales. The effects of an ancient dragon’s presence on its lair and the region around it also depend on its color and corresponding element.

In D&D’s current incarnation (Fifth Edition, also known as D&D5e), two major types of dragons exist: chromatic and metallic. As a rule, chromatic dragons have an evil alignment, while metallic dragons are good.

However, exceptions exist as intelligent creatures can choose their own actions and motivations. Previous editions included gem dragons with psionic powers as well, but they are not part of current D&D canon. Here are a few of the most significant dragon characters you might encounter when delving into D&D.

Bahamut is a good-aligned deity, the king of metallic dragons. He is depicted as an enormous platinum dragon, the only one known to exist, whose scales may shift between shades of metallic blue depending on his mood. He was introduced in the first D&D supplement, Greyhawk, published in 1975. However, he was not given the name Bahamut until the First Edition Monster Manual was published in 1977.

Bahamut sometimes takes human form, often in the guise of a hermit accompanied by seven canaries, so he can observe mortals more closely. Bahamut’s followers often have a lawful good alignment, including clerics and paladins who are determined to strike down evil. 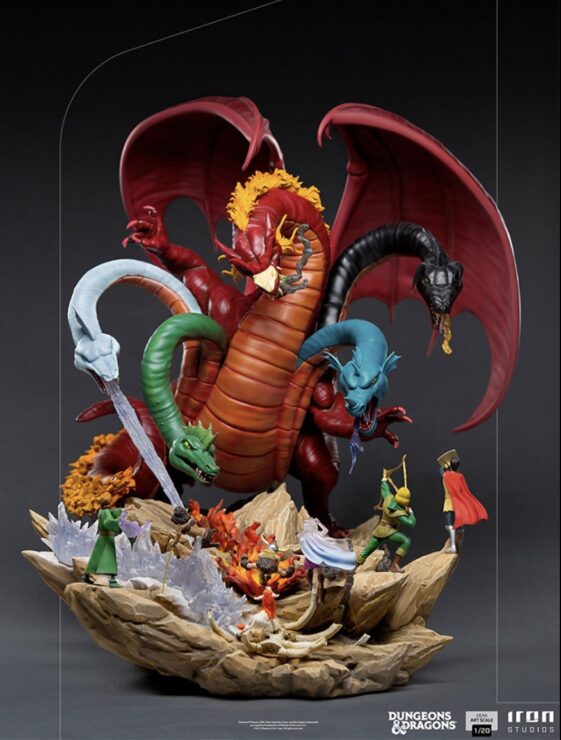 Tiamat is an evil goddess, the queen of chromatic dragons, and one of D&D’s longest-running antagonists. She has five heads, each one featuring a chromatic color (red, blue, white, green, and black) and equipped with the corresponding breath weapons, and a tail tipped with a poisonous stinger.

Tiamat originated in the same Greyhawk campaign supplement as Bahamut, though she similarly was not given her name until the First Edition Monster Manual. She has been featured in many D&D stories, ranging from the recent Fifth Edition adventures Hoard of the Dragon Queen and The Rise of Tiamat to the 1983 Dungeons & Dragons cartoon series.

Tiamat sows chaos through the world and wishes to increase the power of chromatic dragons while diminishing the influence of her brother and chief rival, Bahamut. Though Tiamat herself is chaotic evil-aligned, she demands reverence and obedience from her followers. Therefore, her clergy must be either lawful or neutral evil, and willing to follow her commands.

Sometimes known as Asgorath, Io was the dragon god of creation. A neutral deity, Io could be worshipped by individuals of any alignment. Some lore suggests that Io created the worlds of D&D’s universe. Most sources refer to Io as male, but others say Io is female.

Io was said to be the parent of several dragon gods. One legend says that a primordial being called Erek-Hus fought and killed Io, cleaving the body in two equal halves with an obsidian blade. The two halves formed themselves into Io’s final offspring, Bahamut and Tiamat.

Astilabor is the dragon goddess of treasure hoards, the patron deity of the draconic urge to gain wealth and power. She is a neutral deity, and her true followers must have a neutral aspect to their alignment.

While she encourages amassing and protecting wealth, she does not like open greed and theft, so her followers must attempt to balance their ambitions and behavior. Counting one’s hoard may function as a form of worshipping Astilabor. She generally is depicted as a dragon with sparkling scales of every metallic and chromatic shade. 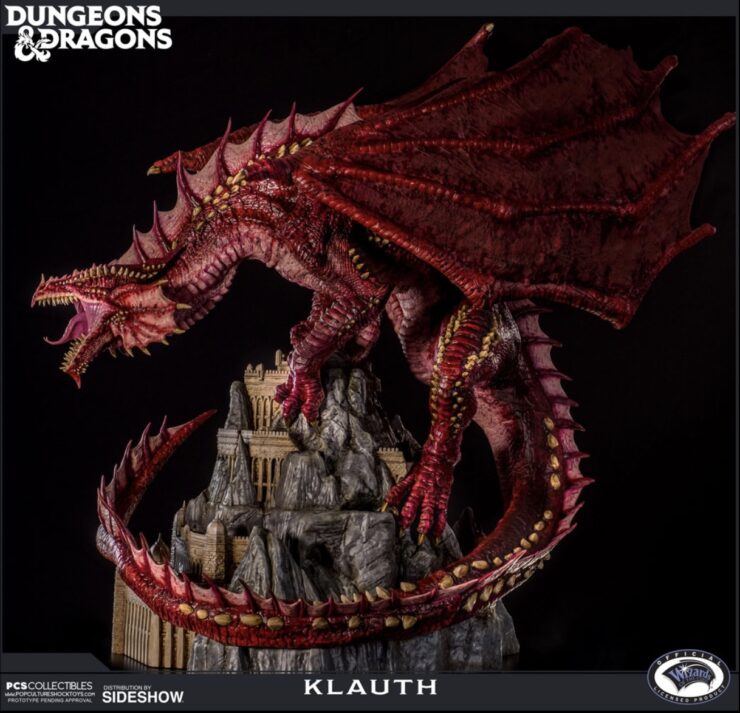 Unlike the other dragons listed here, Klauth is not a god. Also known as “Old Snarl,” this ancient red dragon is mortal, though he is the oldest known living dragon. Klauth’s background was provided in Dragon Magazine #244, published in February 1998 as part of the magazine’s “Wyrms of the North” series. Such articles were published to provide extra lore and inspiration to dungeon masters for memorable characters to use in their campaigns.

Klauth became a popular antagonist, and was featured in the Forgotten Realms campaign setting published for Third Edition, and even the Neverwinter Nights video game in 2003. His most recent appearance in an official adventure came in Storm King’s Thunder, a Fifth Edition campaign published in 2016.

Which dragon from the world of Dungeons & Dragons is your favorite? Do you have a preferred alignment?