All good things must come to an end.

Star Wars™: The Clone Wars is over. What started out as a spinoff cartoon has gone on to become a legend for Star Wars fans. The final season in particular has showed us that the series holds up even against the best of the films.

The final three episodes, and a couple before that, should have been released as a theatrical film. They are epic, emotional, and unforgettable. Some fans are calling them the best stories of all, even compared with the movies. They came at a time when we needed them. With many under quarantine or uncertain about the future, escapism can be invaluable. We need fun, memorable stories to give us something to enjoy and to connect us with a feeling of hope.

Let’s take a look at what happened at the end of this fantastic series.

(In case you haven’t caught up, we recapped Episodes 1-3, Episodes 4-6, and Episodes 7-9 in previous blog entries. Beware series finale spoilers below!) 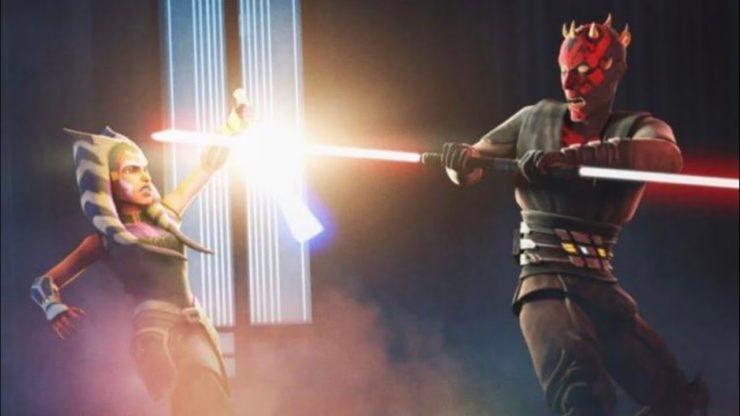 The episode opens with a face-off between Maul and Ahsoka. The darksider is disappointed that Kenobi isn’t there. The whole point of allowing himself to be located on Mandalore was so he could get his revenge. Instead, he is faced with Ahsoka, a young woman he’s heard nothing about. He will soon learn that she’s a force to be reckoned with – but she in turn will discover that Maul has a certain wisdom about things.

“Could the moment be upon us?” Maul wonders. It’s clear to him that the end of the Clone Wars is nigh, as is the beginning of the reign of Sidious.

The two Force users lock swords briefly before Maul escapes. Ahsoka regroups with Bo-Katan and the clones, speaking to Kenobi via hologram. He tells her that the Jedi Council knows of Sidious, but they don’t have his identity or a way to get to him. Dooku has been killed by Anakin, so the only source they have for Sith information is Maul. Ahsoka is tasked to hunt him.

Underground, Maul has been swatting clones like flies. He takes one of them, Jesse, alive, using the dark side to make him talk. What he wants to know is simple: Who is Ahsoka Tano?

Meanwhile, Katan and her former Death Watch learn from Maul’s Mandalorian mouthpiece, Almec, that Maul has been dreading something. Almec is killed before he can reveal more, but he gets his point across with his last breath.

Ahsoka and Katan find Maul on the throne of Mandalore. Katan leaves to assist her fellow warriors, and Ahsoka faces off once more with the red-skinned devil. But he doesn’t want to kill her. In fact, he sees them as kindred spirits, both used and betrayed by those close to them. Maul offers a chilling speech, beseeching Ahsoka to join him to defeat Sidious.

For a moment, it looks like Ahsoka will accept his proposal. She knows that the Jedi have been wrong about several things, and she doesn’t have enough faith that they will successfully defeat the dark side.

Ahsoka says she will help him. But then she asks why he was interested in Skywalker. Then Maul’s plan is unraveled – he tells her that Anakin has been groomed to be Sidious’ new apprentice. Ahsoka finds this too hard to believe, so the great battle finally begins.

Ahsoka and Maul’s fight is one of the best in the franchise. It’s violent, chaotic, and beautiful. More than that, it’s satisfying. Ahsoka is more than a match for Maul, throwing him out the open window. She then chases him down as he climbs a building to get to some support beams.

The fight intensifies, with Ahsoka eventually winning. Maul falls, but his opponent catches him with the Force. A clone ship flies into view, and Ahsoka guides Maul into it. 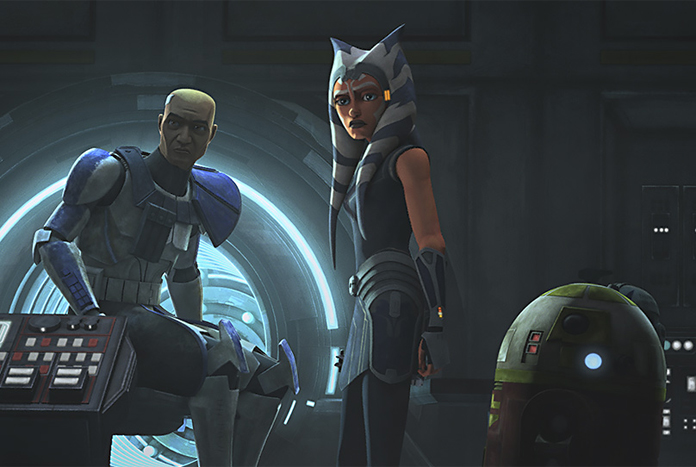 The Clone Troopers have defeated Maul’s Mandalorians. They are getting ready to leave the planet, along with the Republic’s greatest prize – Maul himself.

Bittersweet moments are felt during a holo-conversation. Ahsoka makes it clear she is only a citizen, so the masters don’t reveal many details on the war effort.

Ahsoka and the clones then board a cruiser and head towards Coruscant. Maul is with them, kept in a special restraining device built by the Mandalorians to imprison Jedi. We get some great shots of the Dathomirian, looking out from his cell with an expression of deep malice. It’s actually pretty creepy.

Then the unthinkable happens – every clone is ordered to wipe out the Jedi. Order 66 has finally arrived, and Ahsoka is in serious danger. Rex struggles to fight back his programming, managing to tell Ahsoka she needs to find Clone Trooper Fives. Then he pulls the trigger, and just like that, Ahsoka is their enemy. Her friends who painted their helmets to honor her are now out to get her, which makes this a particularly emotional episode.

Ahsoka escapes and does the unexpected – she frees Maul. She’s not on his side though – she only wants him to be a diversion. Even so, it’s possible for the audience to feel for Maul. As Star Wars has done before with Darth Vader and Kylo Ren, a quite evil villain has been made out to be somewhat worthy of sympathy.

Ahsoka accesses records and learns of Clone Trooper Fives’ involvement in the discovery of a chip inside the brains of clones. She now knows what Rex was trying to tell her when he went haywire – this all has something to do with the chips.

With the help of some droids, Ahsoka captures Rex and successfully removes the chip in the medical bay (this also involves Ahsoka using the Force to tap into Rex’s mind – pretty similar to a mind meld in Star Trek). Rex is back to his old self.

Now, the other clones are after them both.

The best was saved for last (honestly though, “The Phantom Apprentice” was pretty good too).

Rex and Tano are in an impossible predicament. On the one hand, they don’t want to hurt the rest of the clones. On the other, those clones will stop at nothing until they’re both dead. So Rex sets his weapon to stun before the clones make it through the door. After incapacitating them, Rex and Ahsoka make their way to the hangar to get a shuttle.

As the heroes fight, Maul causes chaos. He destroys the ship’s hyperdrive. It comes out of its jump and enters a freefall above a moon.

Back at the hangar control room, Ahsoka and Rex are trapped. They want a shuttle to get away, but the clones are waiting in the hangar bay. We’re then treated to a classic Clone Wars diversion, complete with help from feisty droids. They go down to the bay, and Rex stalls as the droids work with the ship’s computer. Ahsoka and Rex are about to be toast, but the droids’ computer work makes the floor drop out from under the clones.

The battle is spectacular – clones below, heroes above. The shooting never stops, and things get worse when Maul arrives and steals the shuttle Ahsoka was after. She uses the Force to try and stop him, but she’s forced to let go of her hold to help Rex behind her.

Eventually, Ahsoka cuts the floor out under her and Rex (an awesome moment). As the fighting continues, Ahsoka throws Rex into a Y-Wing bomber ship. Ahsoka almost makes it, but they fall out of the cruiser. As Rex flies the Y-Wing, Ahsoka plunges thousands of feet down, jumping between debris pieces and trying to get to Rex’s shuttle. This is total fan service – it’s an awesome, edge of your seat sequence that perfectly captures what Clone Wars is all about. And just like her fight with Maul, we see how great Ahsoka’s abilities truly are.

She makes it onboard Rex’s ship. The Jedi Cruiser crashes. And the Clone Wars are almost over.

As a fitting end to the saga, the next scene shows that Ahsoka and Rex have buried the troopers that were trying to kill them. These were their friends, and they deserve nothing less. Their helmets have been placed on stakes above the graves. Ahsoka stands before them and drops her lightsaber.

Focusing in on the helmets of dead clones, we’re reminded that this is the end – the end of the series, and the end of the clones themselves. Sure, the survivors of the war will keep fighting for the Empire. But the heroes as we knew them, bred for the cruel and evil purpose of galactic takeover disguised as protection, are lost (with the exception of Rex and a few others).

But the series has one more scene to show us. We’re taken to some years into the future. The moon it all ended on is now covered in ice. Imperial probe droids and stormtroopers are scouring the surface.

Mechanical breathing is heard. We see the terror of all terrors, Lord Vader of the Sith, bending down and inspecting one of the clone trooper’s graves. He has discovered Ahsoka’s lightsaber. Though we can’t see his expression, it’s clear that Vader transforms, however briefly, back into Anakin Skywalker. He remembers his former Padawan and looks toward the sky. He is remembering another life.

And let us remember, always, how great of a show Clone Wars was – and how much Season 7 truly delivered for the fans.

Wasn’t that awesome? Let us know in the comments, and Let Your Geek Sideshow