Well, Season 2 of The Mandalorian™ is finally finished. Over the past two months, we’ve gotten some high-octane action, some wonderful performances, and a few beloved characters from throughout the Star Wars™ saga. The final two episodes are among the best of the series, especially the finale.

Let’s recap on everything that happened, paying special attention to the most thrilling moments. (To recap the rest of the season, check out the Chapters 9-11 recap and the Chapter 12-14 recap.)

A warning: There are many spoilers ahead. And they are awesome.

Din Djarin, Boba Fett, Fennec Shand, and Cara Dune take Migs Mayfeld, a prisoner seen in Chapter Six, into custody. They need his help finding Moff Gideon so Mando can rescue Grogu from his ship. It turns out that Mayfeld was once a part of the Empire, so he knows how to acquire certain information that will help point the heroes in the right direction.

They soon arrive at a rhydonium (a highly unstable and dangerous chemical) refinery used by Imperial soldiers. Mayfeld needs to get to a terminal to access Gideon’s location in space. As the rest of the team watches from a distance, Mando and Mayfeld sneak into the base after hijacking a transport and donning trooper gear. They are chased by pirates attempting to ignite the rhydonium, and Mando has to climb atop the vehicle while Mayfeld drives in order to fight them off.

After a thrilling chase with way too many close calls, they make it to the facility. Everyone stationed here believes that the pair really are loyal Imperial soldiers, and they are congratulated by numerous troopers and officers for bringing in the one and only transport to survive the pirate attacks.

Mayfeld prepares to approach the needed information terminal, but he notices his former commander sitting nearby and becomes afraid he’ll be recognized. Mayfeld is about to call the mission a failure, but Mando steps in goes to the terminal, forced to remove his helmet for a facial scan. It’s an interesting fulfillment of foreshadowing, as an annoying Mayfeld had earlier pressed Mando about never removing his helmet (though he had to so in private in order to don the trooper gear).

Mayfeld’s former commanding officer grows suspicious and confronts Din Djarin, who doesn’t know what to say. Mayfeld arrives and tries to salvage the situation, saying that Mando is his commander and that his hearing was damaged in battle. He also says that Mando goes by the name “Brown Eyes.”

The Imperial commander, Valin Hess, offers the pair a drink. Mayfeld and Hess get into a discussion about legendary Empire battles. While Hess feels that the sacrifice of innocent citizens and thousands of troopers was a small price to pay for the Empire’s dominance, a clearly emotional Mayfeld disagrees. Though Mayfeld is certainly no angel, he at least seems to have a heart, lamenting the fact that the Empire created countless orphans and widows through its warmongering. He ends up shooting Hess for being being so callous, particularly for participating in the Operation: Cinder initiative and sacrificing his own division to ensure the mission’s success on Burnin Konn.

Mando and Mayfeld shoot their way out and are rescued by their team on Slave I. Cara Dune and Fennec Shand pick off attacking troopers, creating a path for the men to escape. From the air, Mayfeld shoots a cache of the rhydonium below, engulfing the facility in flames and symbolically destroying the evil of his old life.

Mayfeld assumes that he’s going back to prison upon completion of the mission. But Dune and Mando decide that he’s redeemed himself enough to be set free. They act like he’s not even with them, striking a conversation about how Mayfeld tragically “died” on the mission. He hesitantly but gratefully walks off a free man.

Later, aboard the light cruiser, Moff Gideon receives a holographic message from the Mandalorian. He warns the villain that he’s coming for him, saying that the Child means more to him than Gideon will ever know, citing nearly word for word Gideon’s original speech in Season 1. 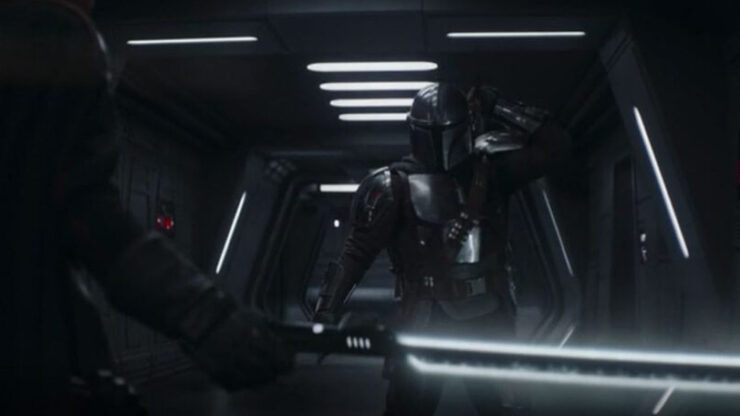 Star Wars has always prided itself on being a timeless tale about simple good versus simple evil. There are obvious good guys, and there are obvious bad guys. But The Mandalorian has turned this on its head, especially the Season 2 finale.

A crack team of warriors join together to defeat an obvious evil and rescue an innocent. However, this team has at least a few people who have definitely committed murders for money. Someone like Boba Fett, known as a notorious villain, keeps his word and chooses to honor justice. The same goes for Bo-Katan, Fennec Shand, and Din Djarin. What results is a fascinating episode exploring humanity, innocence, justice, and last minute saving grace.

Mando and his comrades capture Dr. Pershing, forcing him to help them navigate their way around Moff Gideon’s ship once they’re inside. They then track down Bo-Katan Kryze and Koska Reeves. Kryze wants to get the darksaber back from Gideon, and she wants to use his light cruiser to retake Mandalore. All she has to do is help the team rescue Grogu.

A clever plan goes splendidly, at least in the beginning. The team is piloting the Imperial craft that held Pershing and Boba Fett follows close behind with Slave I. The idea is to make it look like he is chasing Pershing and his pilots.

As the launch door of the light cruiser opens to send out some TIE-Fighters, Boba flies away and the heroes maneuver their ship inside. Mando goes off alone as his comrades battle a host of stormtroopers. All the while, the Dark Troopers are buffering. In a few minutes, they will be ready to fight.

As Kryze, Shand, Dune, and Reeves make their way through the ship, Mando gets into some fights of his own. Backing the action are musical cues from the show’s main theme, slowed down and mixed with new orchestral parts. It makes for a riveting viewing (and listening) experience.

When the Dark Troopers are finished powering up, Mando shuts the doors to the first group just in time, but one makes it through and engages him. Each combatant’s armor makes it hard for them to deal much damage, but the Dark Trooper continues brutally punching Mando’s helmet into the ship’s wall. By this time, we know that the troopers are full-on droids. If they had been created during the Clone Wars, the Clone Army may have lost nearly all their battles. The machines are clearly the most dangerous droids seen in the franchise yet.

However, the Dark Trooper is clearly no match for Mando’s beskar spear at close range. After defeating the robot, Din Djarin opens the airlock and sends the other droids flying into space. He then enters the brig to find Gideon holding the darksaber over little Grogu. Still bound, the little Force-wielder is powerless to defend himself. Gideon orders Mando to drop his blaster, or else the darksaber will come down on the Child. Gideon then says he will let Grogu go with his adoptive father, as he already got the blood he wanted for continued experiments (which he says will bring “order” – many fans believe this is a hint at the First Order and the Snoke clones).

But Gideon is treacherous. He attacks Mando with the darksaber when his back is turned, and they seem evenly matched until Mando finally takes the weapon away and catches the Moff at spearpoint. Mando brings Gideon and Grogu to the bridge. Bo-Katan looks surprised – and not in a good way. It is explained that in order for her to become the true ruler of Mandalore, she must win the darksaber in combat. Gideon laughs as Kryze reluctantly confirms this information. She has to follow her own Way – she must fight Djarin to get the sword.

But before anything can happen, the Dark Troopers return to the ship, propelled by jet thrust back through the vacuum of space. The heroes on the bridge watch the video feed and shut the blast door, standing their ground and awaiting a confrontation they will almost certainly lose. These machines are just too powerful.

However, as it happens in many myths and movies, help arrives at the last minute. An X-Wing is seen from the window. It docks with the cruiser, and its hooded pilot can soon be seen marauding through the ship and fighting back dozens of Dark Troopers. He is armed with a green lightsaber. Meanwhile, Gideon is knocked out after attacking Bo-Katan.

Eventually, the mysterious wielder of the lightsaber makes it to the bridge. Luke Skywalker removes his hood.

The digital effects applied to actor Max Lloyd-Jones’s face make him look exactly like the franchise’s ultimate hero. Star Wars has now done this numerous times with the likes of Grand Moff Tarkin, Leia Organa, and even Luke in The Last Jedi. But this example in The Mandalorian is probably the best instance of a digital face. When you’re watching it, you truly believe it’s Luke, and it’s quite a powerful moment.

It gets better – and bitter. The Mandalorian knows it’s time to let Grogu go. Luke reveals that the Child wants Mando’s permission to leave with him. Saddened, Mando holds Grogu up to his metallic face. Then, in front of everyone, Djarin breaks his greatest rule and removes his helmet. Silently weeping, he bids Grogu goodbye and promises to see him again someday. R2-D2 then enters the room. Luke promises that he will protect the Child with his life. The episode seems to end there, leaving the potential confrontation between Djarin and Kryze unresolved.

But an epilogue after the episode’s credits reveals Jabba’s palace on Tatooine, now run by Bib Fortuna. This character was Jabba’s majordomo (chief officer) in Return of the Jedi. Fett arrives with Shand and kills Fortuna, taking his place on the throne and revealing a spinoff series set to premiere in December 2021.

“The Rescue” is surely the most moving chapter of the show. The final goodbye brought at least one fan to tears. And while the series has brought back fan favorites like Ahsoka and Fett, Luke’s reveal was definitely the most effective one.

What was your favorite episode of The Mandalorian Season 2? Which reveals were your favorite? Let us know in the comments, and Let Your Geek Sideshow.

What If...? Teaser Trailer, Star Wars The Acolyte, and more!