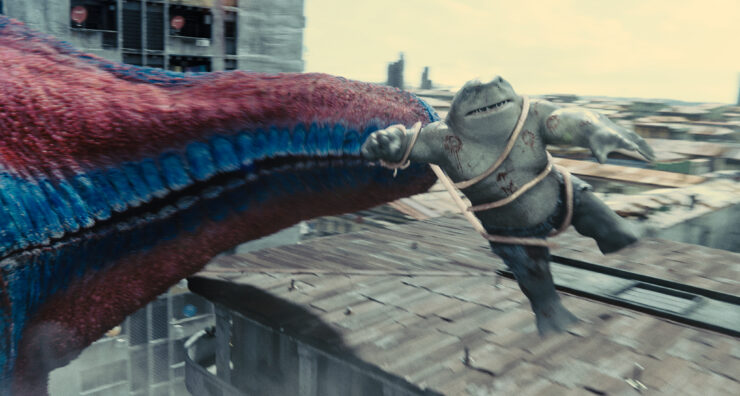 The trailer opens with Amanda Waller’s assessment and manipulation of Robert Dubois, AKA Bloodsport. He’s been imprisoned for putting Superman in the ICU with a Kryptonite bullet. Someone that skilled and that dangerous is immediately an asset to someone like Amanda Waller. To her, the ends justify the means, and she’ll do anything to accomplish her goals.

But what’s her goal in this film? It’s finally revealed in this trailer that their specific mission is to destroy every trace of something known as Project Starfish. There are hints and flashes of the aquatic legs, before we see them flinging King Shark through buildings.


The synopsis of the film is as follows:

Welcome to hell—a.k.a. Belle Reve, the prison with the highest mortality rate in the US of A. Where the worst Super-Villains are kept and where they will do anything to get out—even join the super-secret, super-shady Task Force X. Today’s do-or-die assignment? Assemble a collection of cons, including Bloodsport, Peacemaker, Captain Boomerang, Ratcatcher 2, Savant, King Shark, Blackguard, Javelin and everyone’s favorite psycho, Harley Quinn. Then arm them heavily and drop them (literally) on the remote, enemy-infused island of Corto Maltese. Trekking through a jungle teeming with militant adversaries and guerrilla forces at every turn, the Squad is on a search-and-destroy mission with only Colonel Rick Flag on the ground to make them behave…and Amanda Waller’s government techies in their ears, tracking their every movement. And as always, one wrong move and they’re dead (whether at the hands of their opponents, a teammate, or Waller herself). If anyone’s laying down bets, the smart money is against them—all of them.

James Gunn’s The Suicide Squad premieres in theaters and on HBO Max on August 6th, 2021.

This is just one major story from the Pop Culture Headlines. For more daily news updates, enable Pop Culture & Movie News- Let Your Geek SideShow on your Amazon Alexa device or listen through iTunes and get all the latest geek headlines in a convenient and timely fashion.