This April 1st, we have a lot to commemorate! Happy April Fool’s Day, and happy birthday to none other than Fred and George Weasley! 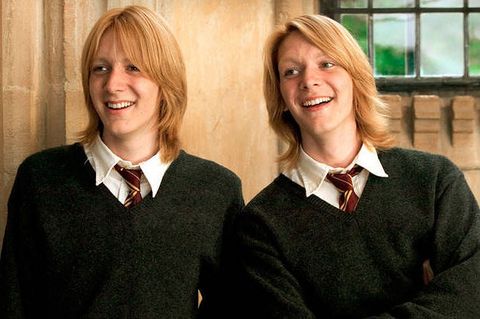 Author J.K. Rowling was very particular about her dates featured in the Harry Potter series. Thus, it’s no coincidence that these troublesome twins share their birthday with the most mischievous holiday of the year. To celebrate these tricksters, let’s have a look at their five greatest pranks of all time!

Unruly antics were a Weasley Twin trademark, and one that often got the attention of cantankerous caretaker Argus Filch. Although he hates all students, Filch had the most strained relationship with Fred and George because they continually disobeyed and outwitted him.

In Harry Potter and The Prisoner of Azkaban, Fred and George relay a story of getting pulled into Filch’s office for setting off a Dungbomb during their first year. Perhaps not the most inventive or complicated of pranks, the Dungbomb that started it all has a place on this list because, well, it started it all.

Because of this prank, the Weasley twins wound up pilfering a blank piece of parchment from a drawer of confiscated items. That parchment turned out to be the Marauder’s Map, an intricate, moving illustration of all the secret passageways and people inside Hogwarts Castle.

They stole it by dropping another Dungbomb, a double whammy diversion that changed their lives—and eventually Harry’s, too. 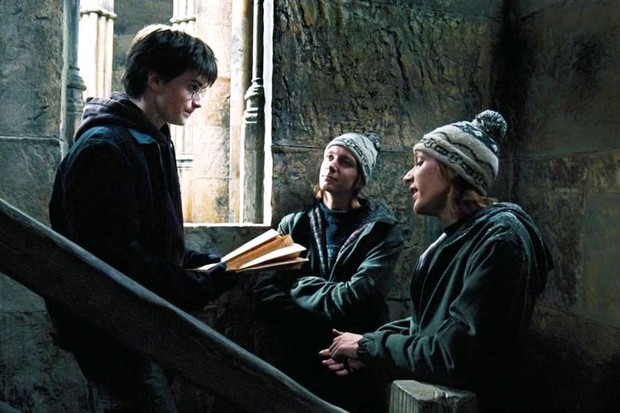 Anyone with a sibling knows the agony of having particularly conniving older brothers. In a family of seven kids, no one was safe. It seems that Ron, the youngest boy, was most vulnerable to Fred and George’s wicked ways.

Torturing Ron was all fun and games at The Burrow, except that these jokes almost always went way too far. As payback for breaking a favorite toy broomstick, Fred turned Ron’s teddy bear into a spider, giving Ron lifelong arachnophobia. The twins also fed Ron painful, blistering acid pops, which likely inspired their future franchising of puking pastilles and ton-tongued toffee.

Worst of all was the time some seriously twisted seven-year-old twins tried to make an Unbreakable Vow with Ron. What he was going to promise is a mystery, but if he had broken that promise, he would have died. Despite being severely punished for this joke, Fred and George continued to playfully prank their family well into adulthood. 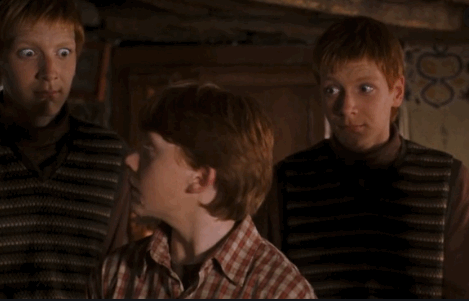 3. Tricking the Goblet of Fire

“One drop each,” said George, rubbing his hands together with glee. (Goblet of Fire, p. 259)

These bantering brothers are no strangers to incredibly sophisticated magic. Fred and George often use their powers for good-natured evil, or for some monetary profit. They attempt their most daring trick in Harry Potter and The Goblet of Fire when they create a potion to hoodwink Dumbledore’s Age Line.

A ring of magic drawn around the chalice that decides the Triwizard Tournament champions, the Age Line is literally from the mind and wand of one of the most powerful wizards alive, but Fred and George are up for the challenge. In fact, these through-and-through Gryffindors appear quite confident in their ability to deceive the goblet. After drinking an aging potion, the Weasley twins hop into the circle… and have about two seconds before they are hurled out with the spontaneous addition of long white beards.

We’ll give them an O for effort. 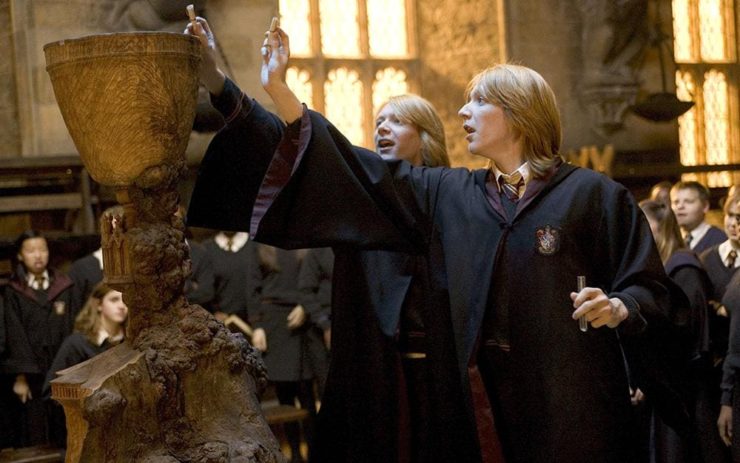 Switching names and identities is a staple of even non-magical twins’ lives. When you’re as identical and impish as Fred and George Weasley, it’s basically a daily requirement to confuse relatives and strangers alike.

Although Fred and George do this throughout the series, one of the best instances of name switching is in the first book, Harry Potter and the Sorcerer’s Stone. It’s from the moment we meet the Weasleys; on King’s Cross Station Platform 9 ¾, the rambunctious redheads are about to go through the magical barrier. Mrs. Molly Weasley, their mother, implores Fred to follow the oldest son through the seemingly solid bricks. Immediately, Fred insists he is, in fact, George. It is only after Molly apologizes that Fred reveals he was Fred all along.

This joke is extended when the Weasleys all get their famous Christmas sweaters, which feature their initials knitted into the front. Although we’re meant to believe they’re wearing their proper sweaters when they meet up with Harry and Ron, Gred and Forge could easily switch clothing whenever it suited their next laugh. 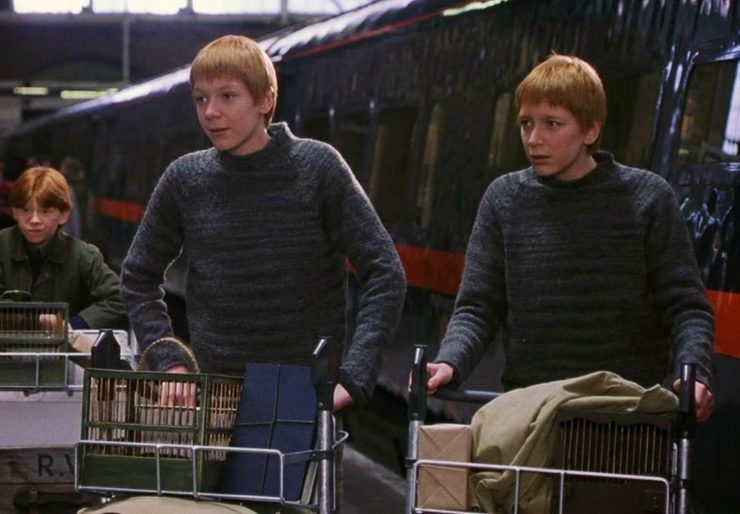 1. Their Exit from Hogwarts

While this is more of a collection of rapid-fire pranks that occurred in a dizzying, Umbridge-defying display, it still takes the top spot on this list. The Umbridge Era exit in Harry Potter and the Order of the Phoenix shows the Weasley twins on their worst behavior, and we couldn’t be prouder.

After enduring months of Educational Decrees that ban everything Fred and George stand for—rumpled uniforms, Skiving Snack Boxes, skipping class—the Weasley twins decide to take their future into their hands. During a quiet night at the castle, Fred and George turn an entire corridor into a marshy wetland of their own design.

This “Portable Swamp” is the last straw for Dolores Umbridge, who agrees to allow long-besmirched Filch the pleasure of whipping the pair of Weasleys. Unperturbed by her threats, Fred and George summon their broomsticks—which were previously chained to Umbridge’s office wall—into the middle of a crowd and fly out of Hogwarts and off into the sunset.

Now, in the films, there’s no swamp; instead, there are incredible fireworks. In the books, Peeves salutes the twins, and Professor Flitwick keeps part of the swamp cordoned in the corridor because the magic is so impressive. In the films, Flitwick is allowed a moment to cheer on the dastardly duo. Both versions of the final prank allow the triumphant twins their freedom and promote their entrepreneurial tendencies as they advertise their new shop, Weasleys’ Wizard Wheezes.

What’s your favorite Weasley prank? Let us know in the comments!