The Skywalker Saga comes to an end this month, and to celebrate, we’re looking back on some of the best Skywalker moments in the Star Wars series!

A gut-punch of a scene, Han Solo’s death was enough to hurt fans worldwide, but it hurt even more to know that it was at the hands of his own son, Kylo Ren/Ben Solo. Patricide was a pretty serious betrayal of the Skywalker values and the ways of the Light Side. The scene was beautifully performed by Ford and Driver, and remains a pivotal moment in the franchise.

After Padme’s death and Anakin’s destruction, their twin children were given up for adoption. Leia was taken to Bail Organa. Obi-Wan Kenobi personally delivered Luke to his only living family, Owen and Beru. The young couple happily adopted their nephew and raised him to become the altruistic, power-coupling-loving teenager fans met in A New Hope. 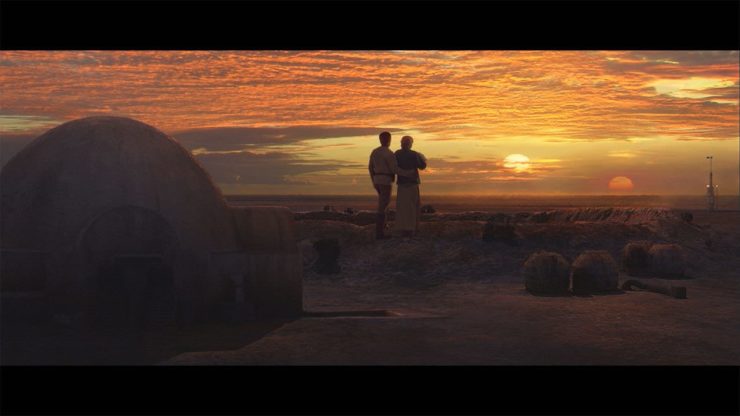 Joel Edgerton as Owen Lars and Bonnie Piesse as Beru Lars in Star Wars: Revenge of the Sith (2005)

Shmi Skywalker’s entire world revolved around her precious, gifted son, Anakin Skywalker. Over the course of the movie she was encouraged to let her son participate in a dangerous podrace and then join the Jedi Order. Putting Anakin’s needs and future far above her own, Shmi sent Anakin away from Tatooine to live a better life free from bondage. “Be brave,” Shmi told him, “and don’t look back.” It was the ultimate maternal sacrifice. 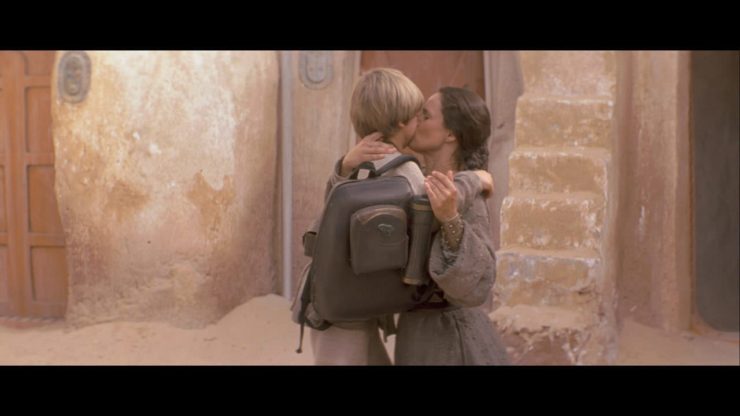 Who knew the farmboy could fly like that? In a daring dogfight, Luke Skywalker assists the Rebel Alliance in taking down the biggest threat the galaxy had ever faced. Using the Force to find the small target, Luke unlocked his powers and saved millions of lives in the process. Victory was so sweet, and a wonderfully uplifting note on which to end the first movie and set up the rest of the series. 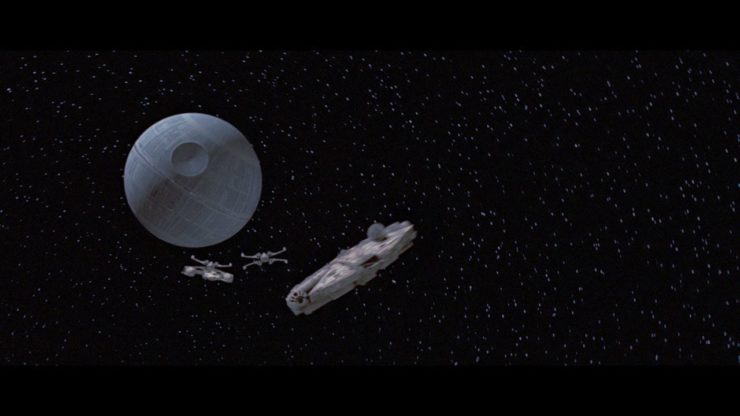 “No, Luke. I am your father,” was a jaw dropping line spoken with the intensity only James Earl Jones could bring to the role. It was a huge plot twist and an excellent addition to the Skywalker family drama. Now fans everywhere recreate and rehash both Vader’s disclosure as well as Luke’s emotional response. Search your feelings, you know it to be true. 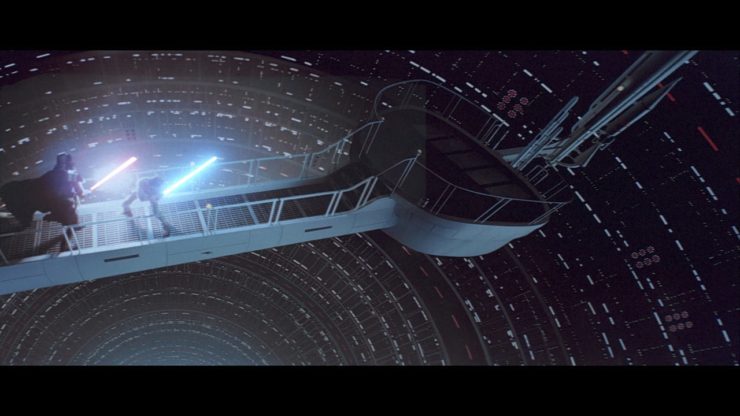 David Prowse as Darth Vader and Mark Hamill as Luke Skywalker in Star Wars: The Empire Strikes Back (1980)

After years of separation, Luke Skywalker finally reached out to his twin sister. Even though he astral projected through the Force, it was an intimate and emotionally heavy moment because Luke affirmed their connection across galaxies. Their bond was solidified once more before Luke made the ultimate sacrifice on the salty fields of Crait.

In a cinematic moment that left viewers speechless, Darth Vader boarded an escaping vessel to completely massacre the crew. Although terrible, the violence was dazzlingly choreographed to the Imperial March. The final scene of Rogue One tied directly to the beginning of A New Hope as well, giving fans some creative nostalgia and securing its spot on this list. 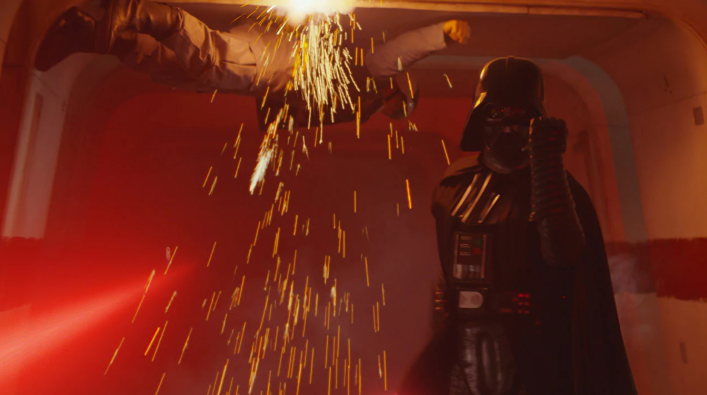 Spencer Wilding as Darth Vader in Rogue One: A Star Wars Story (2016)

John Williams’ Force Theme rose poignantly while Luke Skywalker contemplated the two suns on his home planet of Tatooine. He looked to the horizon, wondering what was outside of the small town he longed to escape, not knowing the journey he was about to embark upon. The moment is particularly powerful because it resonated with many fans who longed to embrace their own destiny. Perhaps it was what made Star Wars as enduring as it is today. 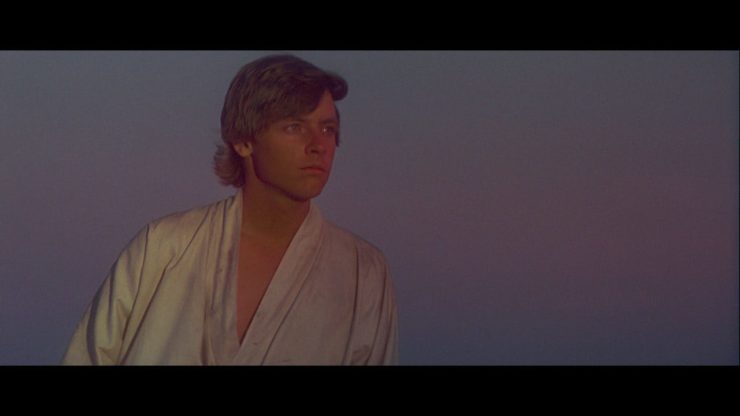 The galaxy would have been overrun by the Empire had Leia not risked life and limb to hide the Death Star plans inside R2D2. This magical movie moment also kicked off the entire saga, launching viewers right into the action. And who better than the late Carrie Fisher to introduce us to the feisty and righteous Skywalker shenanigans? The scene was as iconic as her dress and as beloved as Leia Organa herself. 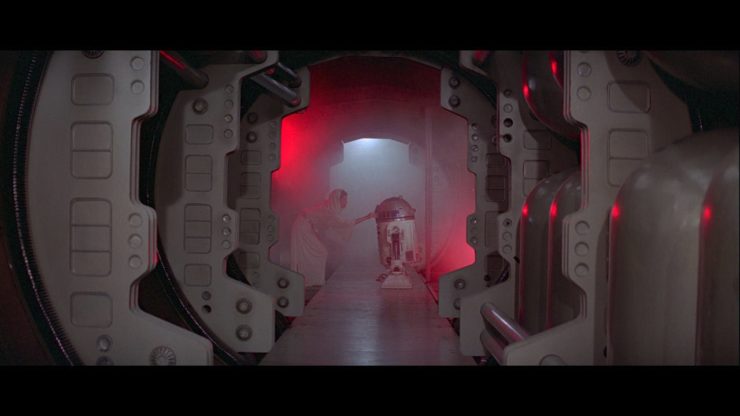 When Darth Vader, defeated and recently returned to the Light, asked for his helmet to be removed so he may look upon his son with his own eyes, there wasn’t a dry eye to be found. Luke Skywalker protested because the helmet’s removal would kill Darth Vader, but Vader insisted it be taken off. It was a powerful, tragic, and beautiful family moment that impacted generations of fans. 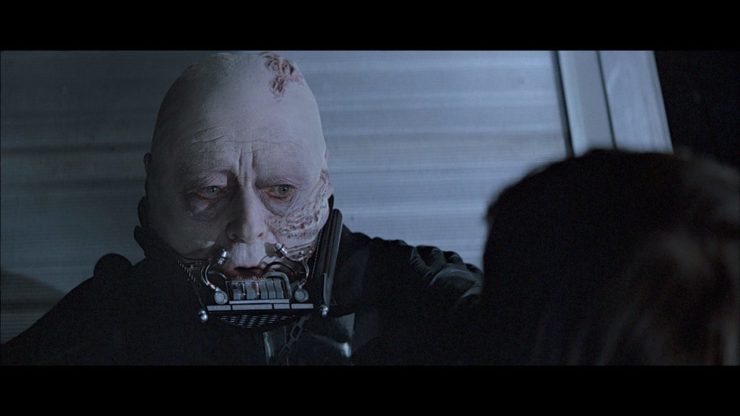 David Prowse as Darth Vader in Star Wars: Return of the Jedi (1983)

Do you agree with this list? Did we miss any of your favorite Skywalker family moments? Let us know in the comments!

All images courtesy of Lucasfilm Ltd.

The Matrix 4 Lands a Release Date, Resident Evil 3 is Getting a Remake, and More!