Hoppy Thorsday everyone! Do you ever suspect your pets may be leading secret double lives? If they sneak out at night and meet up with other neighborhood pets to fight crime when the heroes aren’t around, I would keep an eye on them. Especially if they come home with traces of cosmic energy on their paws, claws, wings, or webbed feet – they might be the newest recruits to the Pet Avengers! 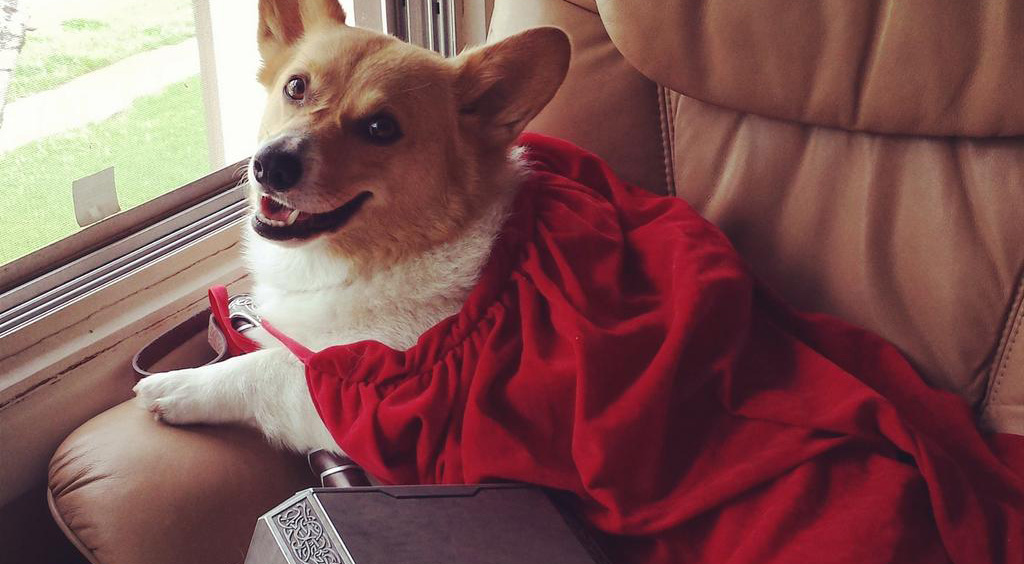 Of course, no team of Avengers would be complete without a Thor, or in this case, Thor Frog. This Thorsday is all about the Pet Avengers, joined by the fearless fighting frog of thunder. Let’s hop to it! 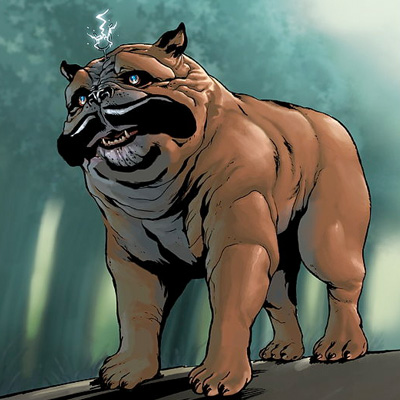 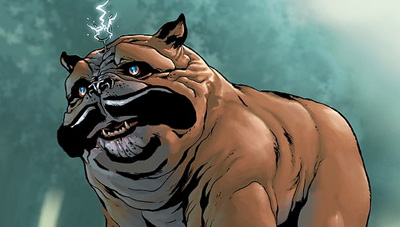 An Inhuman creature with the appearance of a bulldog, Lockjaw assembles the team of Pet Avengers to do what the mortal heroes cannot – find all the Infinity Gems and hide them away safely. He is a loyal member of the Inhuman royal family, and a faithful companion to the Inhuman Crystal.

This dog-alien possesses a tuning fork on his forehead which transmits his psionic powers and allows teleportation and precognition. Lockjaw also has super strength and is capable of eating inorganic matter. After finding the Mind Gem, he summons the other creatures who become the Pet Avengers. He uses the gem to telepathically unite the team so that they share a mental link. Lockjaw leads the team with Throg and helps the pets to recover this missing Infinity Gems from the Savage Lands, the belly of a whale, and even the White House. 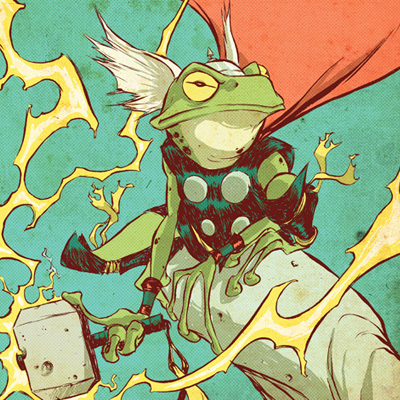 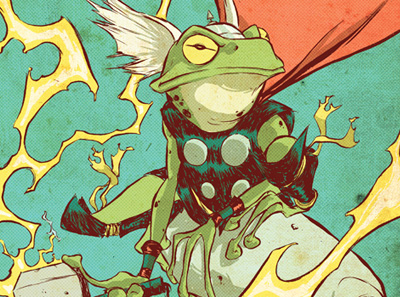 Cursed to take the form of a frog, a man named Simon Walterson (a play on Marvel writer Walt Simonson) was forced to give up the life he knew and join a tribe of amphibians in New York’s Central Park where he was dubbed with the new name Puddlegulp. During his time there he crossed paths with Thor, who had also been transformed into a frog by his brother Loki’s infamous trickery. The two fought side-by-side and Puddlegulp was even found worthy enough to pick up a broken sliver of the god’s mighty hammer, Mjolnir. This sliver transformed him into the known as hero Throg, Frog of Thunder.

Summoned to the Pet Avengers team by Lockjaw, Throg and his trusty hammer Frogjolnir helped lead the animals in their search for Infinity Gems, scattered all over the globe. A faithful member of the team, sometimes Throg still feels out of place, being an animal and mythical hero while also maintaining his human memories. 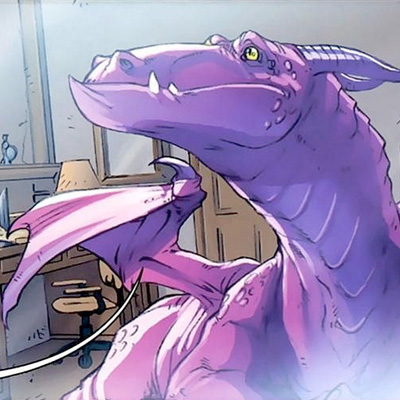 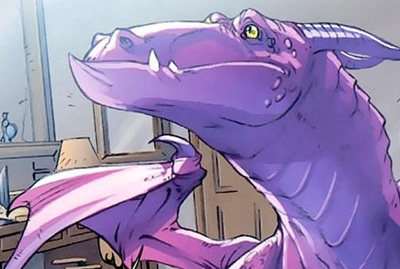 Roughly the size of a housecat, Lockheed is a small alien that resembles a purple dragon. Most often seen with X-Men member Kitty Pryde, Lockheed joins the Pet Avengers in their search for the Infinity Gems after being separated from his human friend.

With the ability to fly and generate fireballs, Lockheed also comprehends all language – yet although he knows English, he rarely speaks it. With the pet Avengers, he finds the Time Gem in the Savage Lands, after the team fights Devil Dinosaur. 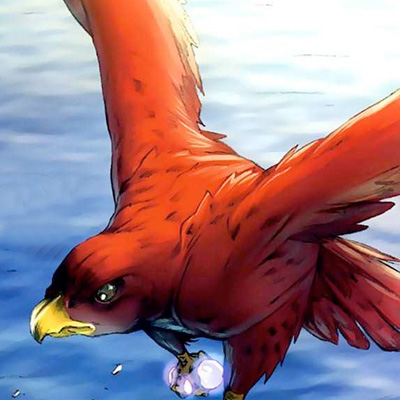 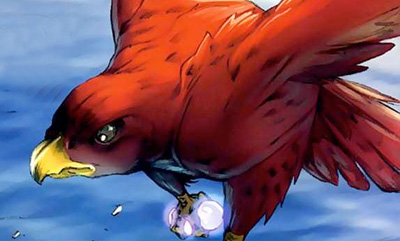 Redwing shares a telepathic bond not only with the Pet Avengers, but also with his owner Sam Wilson (aka Falcon), due to an encounter with Red Skull involving the cosmic cube.

After helping the Pet Avengers to recover all the Infinity Gems, Redwing returns to fight alongside his owner, who becomes the new Captain America. Because of their mental link, the human Avenger can see through the eyes of his companion for a literal bird’s eye view of any dangerous situation. 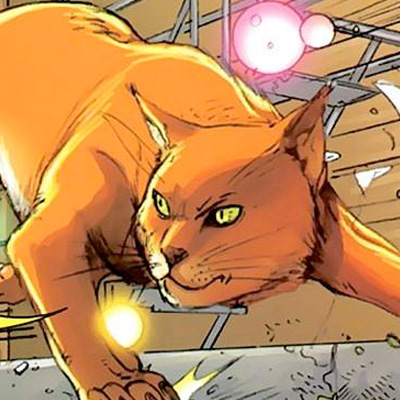 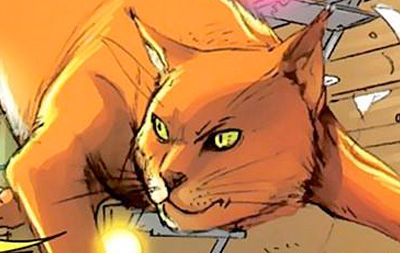 Once partner to the crime fighter named Speedball, Niels the cat has become known as the pet hero Hairball. When an experiment with energy from an alternate dimension went awry, Niels was exposed to energy in the form of colorful bubbles, which gave the once average housecat the ability to summon energy fields that absorb incoming attacks and allow him to bounce around harmlessly.

Thanks to Lockjaw’s use of the Mind Gem, Niels can communicate telepathically with all the other members of the Pet Avengers. Like any typical cat, he hates water, which becomes a problem when the team must travel to the bottom of the ocean to retrieve two more Infinity Gems. Niels also dislikes dogs, which causes him to butt heads with several of his teammates. Nevertheless, the faithful Pet Avenger uses the Soul Gem to revive a fallen canine companion in the final battle against Thanos. 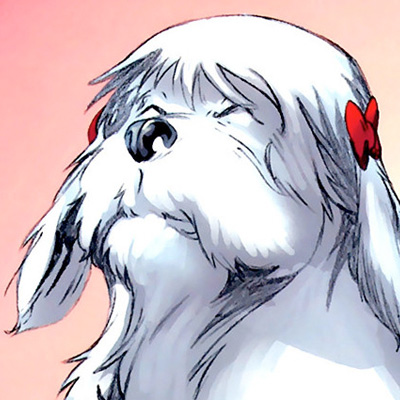 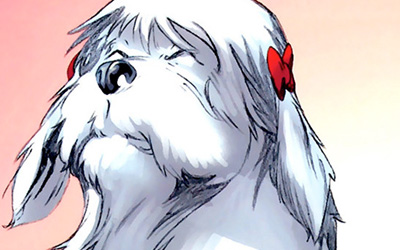 Void of superpowers, Ms. Lion is Aunt May’s pet lapdog who joins the Pet Avengers after being summoned by Lockjaw. Despite the name, Ms. Lion is actually a male dog, a fact which causes confusion with some members of the team.

Upon discovering the final Infinity Gem belonging to First Dog, Bo Obama, the team encounters Thanos at the White House trying to steal the Gems and complete the Infinity Gauntlet. Ms. Lion selflessly tries to fight off the Titan, who kills him in the struggle. However, Niels comes to the rescue, resurrecting him with the Soul Gem, and the Pet Avengers banish Thanos to an alternate dimension and save the day.

With Thor Frog and Lockjaw at the helm, these fearless feathered and furred friends keep the villains at bay while also keeping their owners company. When the world needs them to assemble, you can be sure the Pet Avengers will be there.

Be sure to check out Sideshow’s Thor Frog diorama if you want to bring a bit of the amphibious avenging action into your own home. And once again, keep an eye on your pets – I hear the Pet Avengers are always looking for new recruits.

Until next Thorsday, avenging friends!