So many incredible comics are about to get their turn on television, and it can be hard to keep track of what’s coming soon. Read along to learn more about these comic books making the leap to live action and animation.

Which ones are we most excited for? Let’s get started and find out!

Yes, we’re fraggin’ serious! The baddest bastich in the galaxy made his live-action debut earlier this year on Syfy’s Krypton Season 2, but Lobo’s riding his space-hog all the way into his own solo series sometime soon. Actor Emmett J. Scanlan will remain in the role from Krypton through the spinoff.

Cameron Welsh, the current executive producer and writer of Krypton will also produce and write for the Lobo series, which puts the spotlight on the “foul-mouthed, dangerous, irascible, intergalactic bounty hunter” according to the official announcement. Fans of the ‘Bo shouldn’t hold out for space dolphins, though- Welsh stated that the show’s tone will be a bit more grounded than the insane adventures from the DC Comics series.

Hellfire’s blazing on Hulu in 2020. Earlier this year, Marvel announced a slate of live-action series coming to Hulu, the streaming service that currently hosts their Runaways series. Among these were a live-action Ghost Rider and a live-action Helstrom series.

Helstrom will follow Marvel’s Daimon and Ana Helstrom, the children of a powerful and mysterious serial killer. The siblings pair up to hunt down and terrorize the worst of humanity, each with their own special skills and attitudes. In the comics, Daimon Hellstrom is the son of Satan, with a supernatural powerset and a sister named Satana- which might be why his sister in the series is named Ana. No premiere date has been set for Helstrom just yet, but Jeph Loeb, head of Marvel TV, will executive produce.

8) Howard the Duck on Hulu

Waugh! With the Marvel-Netflix partnership officially in its twilight hours, Hulu is set to take up the mantle of Marvel television, with a slate of upcoming animated series starring some of the most unconventional characters the House of Ideas has to offer. Among them, Howard the Duck stands tall in his own solo show.

Kevin Smith and David Willis will write the series about a duck trapped in a world he never made, fighting to return home before his goose gets cooked! Actress Lea Thompson, who starred as Beverly in the much-derided George Lucas film, will have an undisclosed role in the upcoming Hulu show. Howard the Duck will also team up with MODOK, Hit-Monkey, Dazzler, and Tigra in an animated team-up crossover called the Offenders. Daredevil who?

After numerous attempts to bring this series to live-action, Netflix is finally moving forward with an adaptation of Joe Hill’s IDW comics series Locke & Key. This dark fantasy series revolves around three siblings who, after the murder of their father, move to their ancestral home in Massachusetts. There, they learn that the house contains a set of magical keys that give them different powers, but a demon is hunting for that same power.

Jackson Robert Scott, Connor Jessup, and Emilia Jones have been cast as the Locke siblings, and the cast also includes Sherri Saum, Griffin Gluck, and Darby Stanchfield. The series has reportedly just finished principle photography in early July of this year. Andy Muschietti is executive producing and as he was the mind behind the 2017 adaptation of Stephen King’s IT, Locke & Key will surely be just as dark and creepy as it needs to be. There is no premiere date for the series yet. 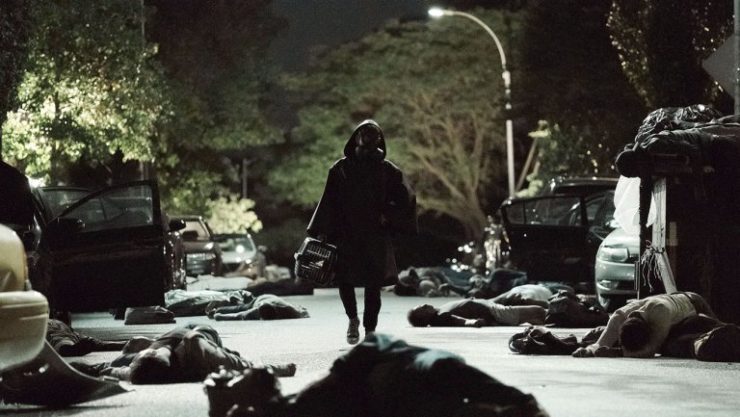 Set to premiere on FX in 2020, Y, the live-action adaptation of Y: The Last Man, has had a long road to get to television. Based on the comic by Brian K. Vaughan and Pia Guerra, Y takes place in a post-apocalyptic world wherein a cataclysm killed off every male mammal except for one lone human and his pet capuchin monkey. Barry Keoghan stars as Yorick Brown, with actresses Diane Lane, Imogen Poots, Lashana Lynch, Amber Tamblyn, and more rounding out the main cast.

There have been some personnel changes in the production staff, but as of April 2019, Eliza Clark has been set as the series showrunner, and the show received a series order after review of the pilot.

For fans that didn’t get enough of him on ABC’s Agents of SHIELD, Ghost Rider is wheeling into his own television series based on Robbie Reyes the most modern Marvel hero to take on the mantle of Ghost Rider. According to a report from Variety, actor Gabriel Luna will once again suit up as the Spirit of Vengeance who drives a flaming hell-charger and is supernaturally bound to a demon, but he will have a brand-new storyline completely independent from his Agents of SHIELD appearance.

Ingrid Escajeda will serve as both showrunner and executive producer, along with head of Marvel TV Jep Loeb. Ghost Rider has no premiere date at this time, but is expected in 2020 on Hulu.

Though Marvel’s Infinity Saga may have come to a close, many of the MCU’s biggest stars are getting another chance to suit up on the small screen. Among those is Jeremy Renner’s Hawkeye, who is getting his own self-titled limited series on Disney+, the upcoming streaming service. According to a report by Variety, the show will see Clint Barton pass the Hawkeye mantle to Kate Bishop, his comic book protégé and a well-known member of the Young Avengers.

At this time, there is no word on a screenwriter, Kate Bishop casting, or a premiere date. Hawkeye joins other MCU-based series like Loki, WandaVision, and The Falcon and the Winter Soldier.

3) The Boys on Amazon Prime

Amazon Prime is getting in on the superhero action with The Boys, their take on the gritty Wildstorm series written by Garth Ennis and Darick Robertson. In this world, superheroes are corrupted by their celebrity status and are reckless, endangering more people than they save. A clandestine CIA squad, called The Boys, are set to keep them in check. Known for its extreme violence and sexual content, The Boys is the book that “out-Preachered Preacher”.

Prime Video’s The Boys stars Karl Urban (Thor: Ragnarok) as Billy Butcher, leader of the Boys. Laz Alonso stars as Mother’s Milk, with Jack Quaid as Wee Hughie, Karen Fukuhara (Suicide Squad) as the Female, and Tomer Kapon as Frenchie. Actors Erin Moriarty (of Jessica Jones notoriety), Antony Starr, Dominique McElligott, and Chace Crawford star as some of the reckless heroes in an organization called The Seven. There have been several trailers for the series, featuring baby-lasers, speedsters bumping into civilians and causing them to explode, and enough swears to make Deadpool jealous. The Boys drops on Amazon Prime on July 26th.

Watchmen is an upcoming drama series set to premiere in Fall 2019 on HBO. Created, written, and executive produced by Damon Lindelof, the series is based on the acclaimed DC Comics limited series of the same name. There have been several teaser trailers and clip videos put out to prepare fans for the arrival of this series, which takes place some years after the original Watchmen story. Harley Quinn is starring in her very own animated series on the DC Universe streaming service! The show follows Gotham’s maid of mischief after she breaks up with The Joker and works to become a member of the Legion of Doom all on her own. The series has a star-studded voice cast, including actress Kaley Cuoco as everyone’s favorite cupid of crime herself. Lake Bell stars as Poison Ivy, with Diedrich Bader as Batman, Alan Tudyk as The Joker, Christopher Meloni as James Gordon, Rahul Kohli as Scarecrow, and Sanaa Lathan as Catwoman. Wanda Sykes, Ron Funches, Tony Hale, and Giancarlo Esposito will also star.

The series has been ordered for 26 half-hour episodes on DC Universe, and it will reportedly air on Adult Swim in Canada. One teaser trailer and several behind-the-scenes art stills are currently available for the show, and a promotional poster of Harley shared on Cuoco’s Instagram revealed a Fall 2019 premiere date, projected for a likely October release. Harley Quinn is being executive produced and written by Justin Halpern, Patrick Schumacker, and Dean Lorey.

So, which of these shows are you most looking forward to? Anything we didn’t mention on the list? If we missed something that you think should be on the list, be sure to send us your opinions.