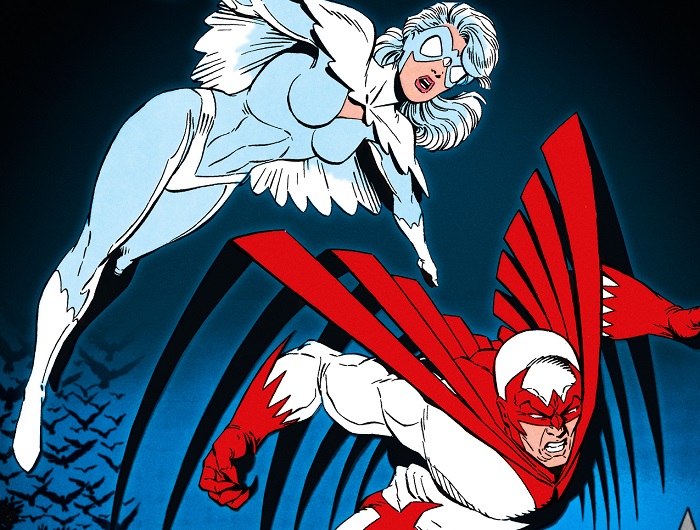 We are spreading our wings to cover the Top 10 Bird-Themed Comic Book Characters! These fine feathered friends and foes have codenames, costumes, and even power sets based on incredible avian creatures, letting them reach new heights of heroism (or villainy). In a world full of countless characters, these Top 10 choices lead the flock.

Read along to find out which of your favorite fearless flyers soared to the top of this list. Let’s get started!

Honorable Mention: The Court of Owls

The Court of Owls, also sometimes known as the Parliament of Owls, is a secret society based in the seedy underbelly of Gotham City in DC Comics. The society, known for criminal dealings and secretive financing of major Gotham City works, has been an influence on the city since colonial times.

They were introduced to the Batman mythos in 2011 by Scott Snyder and Greg Capullo. The Court of Owls was known for training secret assassin sleeper cells called Talons, and Dick Grayson was recently turned into one of these assassins, accepting his destiny as the Court’s prophesied Gray Son. Members of the Court of Owls wear featureless owl masks to conceal their identities.

Nite Owl is the mantle used by two heroes in Watchmen by Alan Moore and Dave Gibbons, parodying a number of already-established DC Comics heroes, including Blue Beetle, Batman, and The Phantom.

The second Nite Owl, Daniel Dreiberg employs owl-themed weaponry and gadgets in battle and is an expert hand-to-hand combatant. He also has a flying vehicle called the Owlship, also called Archie as a reference to Merlin’s pet owl Archimedes. Nite Owl retired from vigilantism following the Keene Act, after which he contributed to scholarly journals about ornithology, the study of birds.

The avian duo of Hawk and Dove originated as teenage brothers Hank and Don Hall, created in the Silver Age by Steve Ditko, Steve Skeates, Dick Giordano, and Carmine Infantino. Since then, the mantles have been passed around, but the most notable pairing of Hawk and Dove are Hank Hall and Dawn Granger, a woman who stepped into the role of Dove after Don Hall died in Crisis on Infinite Earths.

Following the symbolism of their chosen bird aliases, Dove is known for pacifism and peace, while Hawk is typically the more aggressive, forceful member of the duo. By speaking their codenames out loud, Hank and Dawn transform into their superhuman selves. Dawn has a danger sense transformation that allows her only to become Dove in the presence of danger, whether she is aware of the danger or not. The first Dove, Don Hall is the most at-peace being in the universe and cannot be touched by Black Lantern rings.

Without Dove’s presence, Hawk’s rage becomes endless and he becomes violent and super strong. Only together can the two heroes balance one another.

Raven, or Rachel Roth, is the cambion daughter of Trigon the Terrible in DC Comics. She is known for projecting a bird-like “soul-self” of solid black energy that can fight and also provide Raven with an additional range of sight and hearing. She is a powerful sorcerer and empath and is most frequently associated with the Teen Titans.

In the New 52, she took on an even more avian costume design, complete with a bird-like helmet and a cape that even more resembled wings than before. Her demon father also calls her his “Black Bird of Terror” on some occasions when she is under his control.

Hawkeye is the name of two different heroes in Marvel Comics. The first is Clint Barton, a reformed villain who began as a villainous trick archer who fought Iron Man, and then reformed and became an Avenger alongside longtime romantic interest Black Widow. Clint Barton also became romantically involved with Bobbi Morse, aka the Mockingbird, another bird-themed hero.

Kate Bishop took on the Hawkeye mantle as a member of the Young Avengers, during which period Clint Barton was dead. She is also an expert archer, as well as a fencer, martial artist, and boxer. Her first costume was a mixture of the gear of both Hawkeye and Mockingbird. Since Marvel’s Secret Invasion, the two Hawkeyes have coexisted and teamed up quite frequently.

Adrian Toomes is one of Spider-Man’s oldest and most often recurring villains, and a member of the Sinister Six in Marvel Comics. He is a former electronics engineer with a genius mind for developing new inventions. He was first caught by Spider-Man on the middle of a crime spree in New York, equipped with a flight harness he designed himself.

Though he is an older gentleman, he still poses a formidable threat to Spider-Man. His wing mechanism features electromagnetic technology that enables silent, precise, and sustainable flight. Several other characters have been the Vulture since Adrian’s introduction, but he remains the most consistent person to wear the mantle. In Spider-Man: Homecoming, his scavenger nature is emphasized as Michael Keaton obtains Chitauri tech to create his wings and sustain his family.

Dinah Laurel Lance, also known as Black Canary, is a DC Comics metahuman with the ability to emit a sonic ‘Canary Cry’. In more recent comics, Black Canary has been able to use this ability to glide by screaming downward, propelled by the force of the sonic waves she emits. She is also known for her hand-to-hand combat skills, being proficient in Aikido, boxing, kung fu, krav maga, and more.

Black Canary is actually a legacy hero, as the mantle has belonged to both Dinah Drake and her daughter Dinah Laurel Lance. During the Fletcher, Stewart, Tarr, and Wu era of modern Black Canary comics, an original music album was recorded and put out under the character’s name, as she’s been known to sing at clubs and also lead a fictional band throughout her character history. Her various jumpsuits often have a bird motif to them.

There have been multiple heroes using the mantle of Hawkman and Hawkgirl throughout DC Comics. Technically, the original Hawkman was created by All-American Publications in 1940. Carter Hall the human archaeologist and Katar Hol the Thanagarian police officer are the two most common versions of Hawkman, though there have been others. All versions of Hawkman use Nth metal integrated into their costume’s belt, boots, and wings to fly. His silhouette is well-known for massive wings and a bird-like helmet.

Most versions of Hawkman work closely with some form of Hawkgirl, though she too has been numerous different characters over the years, including Shiera Sanders Hall, Shayera Hol, and Kendra Saunders. Hawkgirl also has wings attached with an Nth metal harness as well as a bird-like helmet and mask (though the native Thanagarians have natural wings). The characters are frequently associated with ancient Egypt, as reincarnations of Khufu and Chay-Ara, possessing lifetimes of fighting knowledge.

Jean Grey is more commonly known as the Phoenix, or even more infamously, Dark Phoenix, thanks to her ability to host the Phoenix Force. The Phoenix Force in Marvel Comics is a cosmic bird-like entity whose powers manifest in the form of a fiery phoenix, encapsulating the power of all life, all destruction, passion, and rebirth. It can manipulate the very forces of life and existence, and can never truly be destroyed.

While Jean is the most famous host of the Phoenix Force, its power has been split and wielded my numerous other mutants including Rachel Summers, Quentin Quire, and the Phoenix Five, consisting of Emma Frost, Namor, Colossus, Cyclops, and Magik.

While recently in Marvel comics the mantle of Falcon was given to a human mutate named Joaquin Torres, Marvel’s first Falcon was Samuel Thomas Wilson, longtime ally of Captain America created by Stan Lee and Gene Colan. Sam Wilson was the first African-American superhero in mainstream comics, noted for having an empathic link with his bird Redwing (the telepathic connection was confirmed by Professor Xavier in Captain America #174).

Wilson could see through Redwing’s eyes, and his original costume featured a wing harness that allowed him to fly. He is also a skilled combatant with Judo and Karate training as well as knowledge of how to use Captain America’s shield. Adrian Toomes also once took on the mantle of Falcon, and an unrelated but similar character named Carl Burgess existed in Timely Comics, which later became Marvel.

Robin is a name that has been passed on to several characters in DC Comics, but most famously belonged to Dick Grayson. Robin is a crucial and quintessential member of the Batman family, serving as a faithful sidekick to the Dark Knight. Robin’s costume contrasts with Batman, providing a bright distraction to criminals who are caught off guard by Bruce Wayne waiting in the shadows.

Dick Grayson went on to take another bird-themed mantle as he grew up- Nightwing. Still, Robin is ruler of the roost when it comes to bird-themed comic book characters. Generations of Robins have worked alongside Batman, becoming an essential crimefighting figure in Gotham City. Contrasting with the darkness of Batman, Robin is the symbol of a new day, bringing Bruce Wayne out into the light, no matter who wears the black and yellow cape.

So, did the birds on this list flock together? Or should we set this one free and try again? If we missed someone that you think should be on the list, be sure to send us your opinions. And that was the Top 10 Bird-Themed Comic Book Characters!