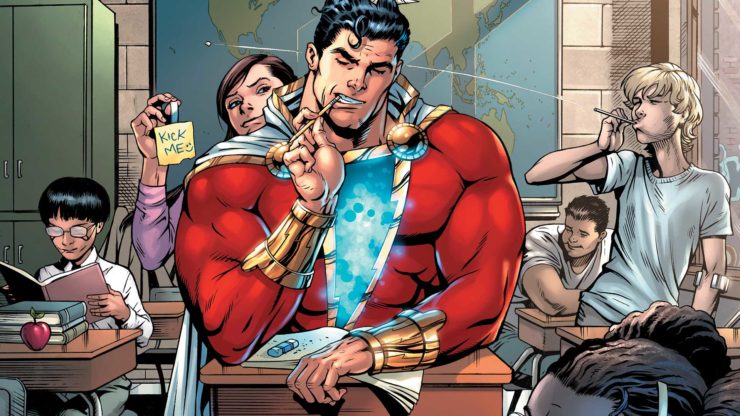 Today, we’re taking the lead and assembling our list of the Top 10 Comic Book Captains. These high-ranking heroes (and villains) are at the top of their game, taking charge of entire teams or striking out on their own with the skills and strength to earn their Captain title.

Read along to find out which fictional captains from Marvel and DC Comics take command of our countdown. 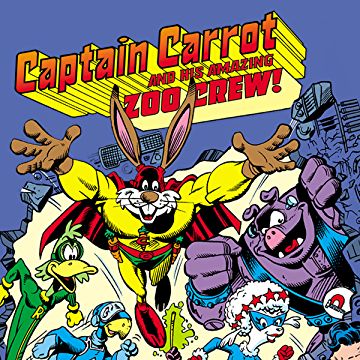 Captain Carrot made his debut in a special insert in The New Teen Titans #16, as a member of an alternate Earth populated by sentient animals. Originally referred to as Roger Rabbit, he became Rodney Rabbit, a rabbit imbued with superpowers after eating a cosmic carrot.

The Captain is a satirical character created by Warren Ellis and Stuart Immonen for Nextwave #1. He was formerly known as Captain ☠☠☠☠, an unspecified expletive, but has also been known as Captain Power, Captain Ultra, Captain Ron, and Captain Kerosene.

He is a member of H.A.T.E., the Highest Anti-Terrorism Effort, alongside lesser known Marvel heroes Elsa Bloodstone, Machine Man, Boom Boom, and Monica Rambeau as Spectrum. The Captain was an entirely new character for the series, which satirized Marvel’s superhero books with extreme violence and comedy.

Captain Metropolis, civilian alias Nelson Gardner, is one of the Minutemen introduced in Watchmen.  Created by Alan Moore and Dave Gibbons, this comic book captain never appears alive in the 2009 film adaptation, seen only in flashback narrative.  He was a sickly child who trained rigorously to overcome his weakness, going on to serve in the military.

In the Minutemen, and later the Crimebusters, Captain Metropolis served as the de facto leader and the strategic brain behind the teams- but he was timid and easily flustered by trouble. 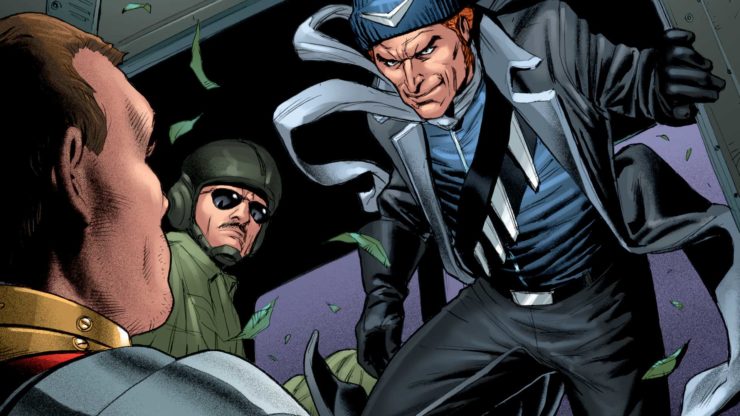 George Harkness, also called Digger, is Captain Boomerang, a notable villain of both Barry Allen and Wally West as Flash. He is an expert marksman and combatant, and utilizes a variety of trick boomerangs, including bladed, explosive, incendiary, and electrified boomerangs.

His son Owen Mercer once took on the role as well, when Digger found himself ineffective in a world of metas and supervillains. Owen utilized trick arrows that included bladed and acid-spewing arrows, but also had limited metahuman abilities. Captain Boomerang appeared in Arrow Season 3 and 5, and Suicide Squad.

Captain Universe is more of a persona than one singular hero, as the role has been undertaken by various hosts. Most notably, Captain Universe is the guardian and protector of Eternity, the leader of Marvel’s Cosmic entities. Captain Universe gets their powers from the Uni-Power, which possesses and empowers a person, granting them strength, flight, Uni-Vision, telekinesis, and it also amplifies their natural powers.

Ray Coffin was the first Captain Universe, a retired astronaut, but other heroes who have been Captain Universe include Doctor Strange, the Hulk, Daredevil, X-23, and Spider-Man.

Brian Braddock, brother to Betsy Braddock, was originally created as a British-market exclusive character from Marvel Comics- starring in the Captain Britain Weekly serial.  His powers of strength, speed, force fields, and flight came from the magician Merlyn, and he has led teams like the Knights of Pendragon and Excalibur.

Despite being intended for a European audience, Captain Britain made the leap to the main Marvel fare and is remembered for series written by Chris Claremont, Alan Moore, and Alan Davis.  In addition to his fantastic powers, Braddock holds a Ph.D. in physics, and is immune to his twin sister’s telepathic powers.

Leonard Snart, also known as Captain Cold, is the leader of the Rogues and a notorious villain of The Flash who first appeared.  He is also the older brother of villainess Golden Glider.  While he is best known as a villain, some depictions of him have posited him as more of an antihero.  He has an expert knowledge of cryonics and is a master thief and tactician.

While he has appeared in many Flash-related comic stories, as well as live action shows like Smallville, one of the strongest depictions of Captain Cold has been in the CW’s Arrowverse- both in The Flash and DC’s Legends of Tomorrow.  In the Crisis on Earth-X storyline, Snart prefers to go by the name “Citizen Cold”. 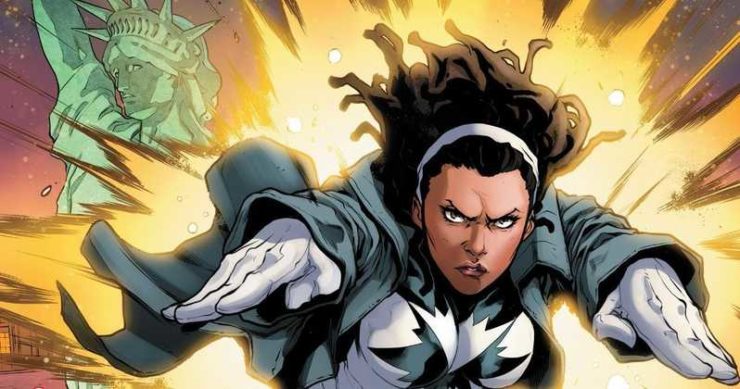 Captain Marvel is a mantle that has belonged to 7 characters in the Marvel Universe, including the original Mar-Vell, Monica Rambeau, Genis-Vell, Phyla-Vell, Khn’nr, Noh-Varr, and Carol Danvers. After Fawcett Comics stopped publishing their own Captain Marvel comics, Marvel gained the copyright in the 60s. To retain the trademark, Marvel has had to publish a Captain Marvel title at least once every two years, explaining some of the breadth of Captain Marvel characters, ongoing series, oneshots, and more.

Each Captain Marvel has had slightly different powers depending on their DNA and how they inherited the powers. Mar, Genis, and Phyla-Vell are all a part of the same Kree Bloodline, Khn’nr is a Skrull sleeper agent, Monica Rambeau is a human woman, Noh-Varr is also a Kree, and Carol Danvers is half human, half Kree.

Created in 1939 by CC Beck and Bill Parker, Captain Marvel debuted on Whiz Comics #2 from Fawcett Comics.  Over the years, there have been several legal disputes involving the character- first with DC Comics, who claimed the Fawcett character too closely resembled their Superman.  The second was with Marvel Comics, after which Captain Marvel was rebranded as SHAZAM! in 1972.  As Zachary Levi, star of the upcoming Shazam! movie, says- let’s not pit Captain Marvels against one another.

In the character’s origin, young Billy Batson summons the abilities of six Immortal Elders- Solomon, Hercules, Atlas, Zeus, Achilles, and Mercury- to become Shazam. Each elder grants him a trait befitting their own legendary powers- wisdom, strength, stamina, power, courage, and speed.  While Shazam is a formidable and strong member of the DC Comics pantheon, one of his most heroic traits is the childhood morality and unique worldview he possesses when compared with his adult peers.  And sometimes, we need to call on the strengths of others to help us win the fight. 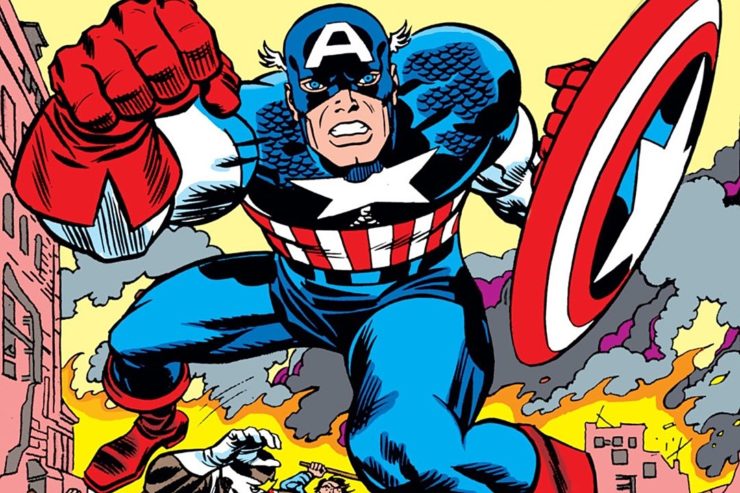 Of course, the #1 spot on our list goes to Captain America- a mantle which has belonged to several, but has been made famous as the heroic title of a one Steven “Steve” Rogers.  Created by Joe Simon and Jack Kirby for Timely Comics in 1941, Captain America donned the red, white, and blue to defend his country from supervillain threats as a patriotic super soldier in World War II.  Following the war, the character was put on ice in 1950, discontinued until a brief revival in 1953, and then a full Marvel revival in 1964.  His books have been published regularly since the, and the shield has become an iconic symbol the world over.

Steve Rogers embodies some of the most classic and true elements of superhero comics- the idea that anyone brave enough can take a stand can become a hero, no matter their background.  The super soldier serum took Rogers from a scrawny man to a strong and powerful hero, but at the end of the day, he always fights for the little guy. Captain America’s shield has also been passed to a number of other heroes over the years- including Bucky Barnes, Sam Wilson, and Danielle Cage- each adding their own significance to the legacy of this star-spangled Avenger.

What topics would you like to see covered in the future? Let Your Geek SideShow and tell us in the comments!