Susan and Kitty are getting in touch with their wild sides to find out the Top 10 DC Characters with Environmental Powers.  From the sea to the sky to the land below, find out more about these forces of nature from DC Comics! 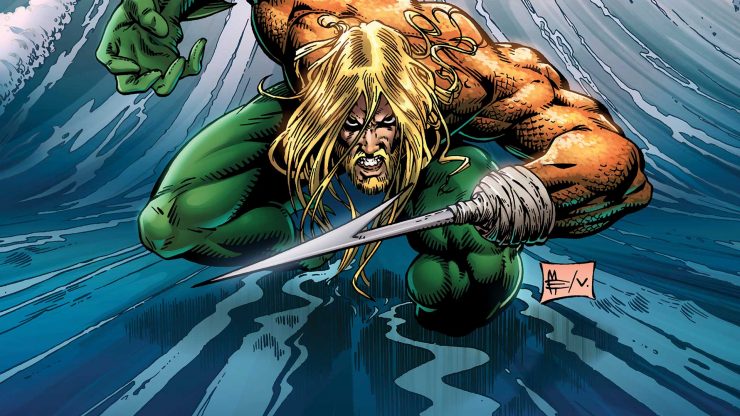 In this episode, we’re going all-natural with our list of the Top 10 DC Characters with Environmental Powers. Whether by land or by sea, these comic book heroes and villains have gotten in touch with their wild sides, making them true forces of nature in the DC Universe!

While Victor Fries does use ice in his criminal ventures under the alias Mr. Freeze, his powers stem from the use of cryogenic technology that manipulates temperatures.

He takes the honorable mention spot on this list because his powers are not as organic as the other characters on this list.

Black Orchid is a mantle used by four different superheroines in DC Comics. She has changed multiple times over the course of her history- in one Black Orchid series, she was even a villain.

Black Orchid is a human-plant hybrid with powers of strength, flight, and the ability to absorb nutrients from the air and generate pheromones. As of the New 52, the character became linked to both the mystical worlds of the Red and the Green.

Also known as the Plant Master, the Seeder, or Floro, Dr. Jason Woodrue has an advanced knowledge of botany that he manipulates in order to control plant growth. After an experimental formula transforms him into a human/plant hybrid, he joins the Secret Society of Super-Villains.

In the Neil Gaiman/Dave McKean miniseries Black Orchid, Woodrue was given a new history as the botany professor who taught Alec Holland and Pamela Isley the science of plant life.  He can mentally control plants, and has a connection to the Green.

Red Tornado is an android created by professor T.O. Morrow as one of several experiments to harness elemental powers. He possesses aerokinesis, as his true form is a powerful entity composed entirely of wind force.

He can produce cyclone-like bursts from his arms and legs to aid in flight, force, and even invisibility. His android “siblings” include the hydrokinetic Red Torpedo, the pyrokinetic Red Inferno, and the geokinetic Red Volcano.

Clayface is the alias of several supervillains in the Batman universe, most notably Basil Karlo and Matt Hagen.  Both men and women have used the Clayface name, with powers of shapeshifting, enhanced strength, and duplication granted through protoplasmic mud-like material.

In the DC Bombshells alternate universe, Clayface was able to manipulate the elements in the earth to reconstitute himself out of silver deposits in the dirt.

Terra is the name used by several heroines throughout DC Comics- most notably by Tara Markov and later Atlee. Every Terra has been a powerful geokinetic, able to manipulate the earth.

Tara Markov, half-sister of the hero Geo-Force, got her powers from scientific experiments, while Atlee comes from a race of aliens called Stratans, and has a rare mutation granted by an ore called quixium.

Due to his proximity to an exploding extraterrestrial ship, Buddy Baker gained the power to temporarily borrow the abilities of any animal- strength, flight, speed, and more.

As the DC Comics mythos evolved, his powers became linked to the Red, a force that connects all animal life in the world, similar to the Green and its force connecting all plant life.

In the New 52, he briefly appeared red instead of his traditional green, due to his connection to the Red, the source of Animal Man’s abilities.

Once a man named Alec Holland, Swamp Thing is a shambling elemental creature connected to the Green as a protector of the natural life of the DC Universe.  Swamp Thing was created by Len Wein and Bernie Wrightson, first appearing in House of Secrets in 1971.

Pamela Lillian Isley is one of Batman’s deadliest rogues due to her botanical knowledge and floral physiology. Neil Gaiman gave the character a revised backstory in 1988, in which Dr. Jason Woodrue injects her with poisons and toxins as an experiment, which transforms her and drives her mad.

Poison Ivy has the power to manipulate plant life- later associated with a connection to the Green- and she can secret toxins and pheromones, while simultaneously being immune to all pathogens and poisons.

The Ruler of the Seven Seas, the Rider of King Tide, the Dweller in the Depths, Aquaman takes the #1 spot on our list.  He is known for his aquatic physiology, telepathic control of aquatic life, and hydrokinesis.

While many people remember Aquaman from his portrayal in Super Friends, in reality his abilities are incredibly powerful and frightening when you think about it- the Earth is mostly covered in water, and much of the ocean has been unexplored due to the sheer dangerous conditions of the seas.  Not to mention all of the terrifying creatures that live in the murkiest depths- yep, Aquaman’s powers can control them as well.

Did you miss any of our previous episodes, including Top 10 Holiday Movies and Top 10 Stan Lee Cameos?  You can check out the full Geek Culture Countdown podcast on iTunes.

And don’t forget to check out all of our DC Collectible figures and more!