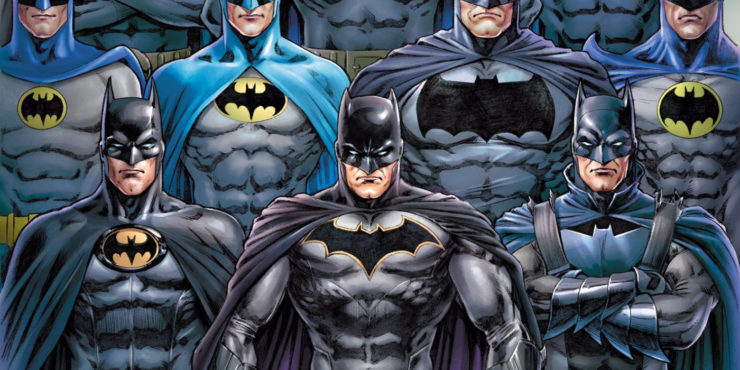 Today, we’re stitching together our list of the Top 10 Costume Changes in DC Comics. From Caped Crusaders to men in tights, the superhero fashion of DC Comics has gone through some crises and some rebirths. We’ve sorted through the closet of some famous costumed crime fighters to bring you the best outfit updates recorded on the comic book page.

Read along to find out which DC Comics metahumans took their looks from zero to hero with a quick costume change. Let’s get started! 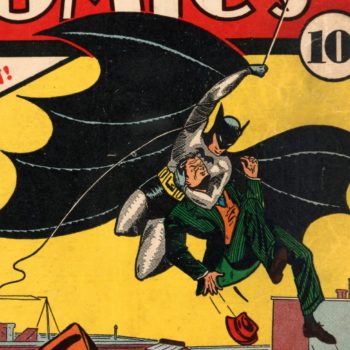 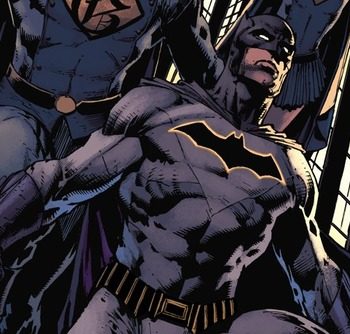 But you can upgrade it!

Batman’s costume has remained fairly consistent throughout the years- this Caped Crusader always rocks a cape and cowl, along with a utility belt and has famous bat symbol. His black trunks may come and go, and sometimes he’s armored up, or dressed completely down (thanks, Batman Damned!), but he’s always ready to fight crime and cast a terrifying shadow against the skies of Gotham.

Of course, when it comes to live-action adaptations, Batman’s had some notable on-screen appearances.  Adam West to George Clooney, sometimes the Dark Knight has some odd additional details tacked on to his signature look. You know what we mean. 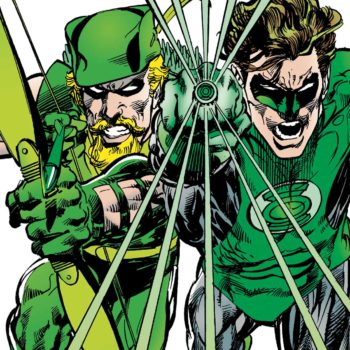 The Emerald Archer went from a man in tights… 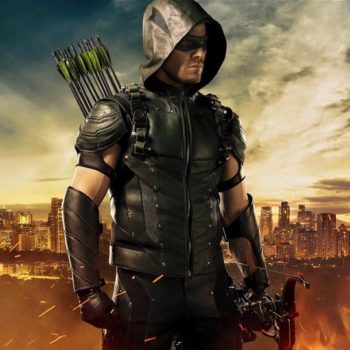 …to a vigilante who gets in street fights.

The Emerald Archer may change his look every now and then, but one thing is consistent- he makes sure to live up to his colorful namesake. Originally imagined as more of an Errol Flynn, Men in Tights type of vigilante, over the years Oliver Queen has been given some more toned-down looks.

With the introduction of the Arrowverse on the CW, Oliver Queen got a more exciting upgrade that paid homage to his comic book attire- a domino mask and hood, a two-toned green jacket, shoulder covers, and arm guards. The costume evolved somewhat further in the series, but largely remained consistent as a new, dark take on Green Arrow. 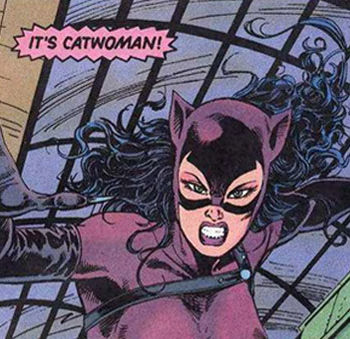 This cat had purple claws in her early days. 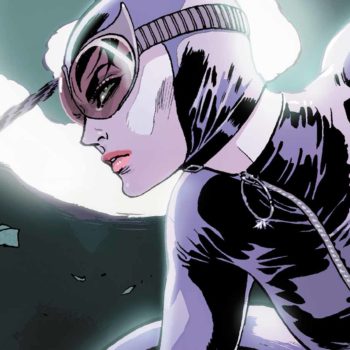 Now Catwoman is sleek and chic in a black catsuit.

Me-wow! This fierce feline femme fatale has had some stylish looks over the years, all starting with Selina Kyle’s purple costume.  As she evolved, she dropped the green cape and opted for a full purple bodysuit with a cat-like cowl and claws.

Even still, she’s continued to make her costume even more sleek, turning into a black cat burglar with a pair of pointed goggles.  And through it all, Catwoman knows how to rock a bullwhip.  She’s also had several unique live-action adaptations, from the Dark Knight Rises to Gotham, among others… 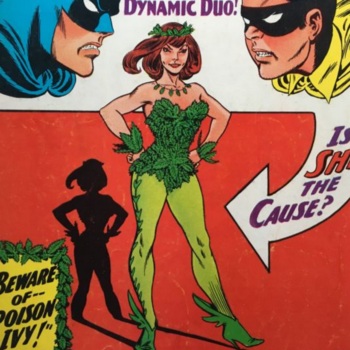 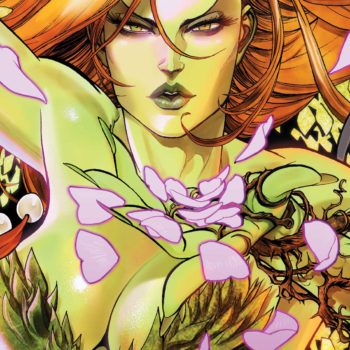 …to a modern green goddess of Gotham.

Gotham’s green goddess Poison Ivy didn’t always have a green thumb- literally. When she first debuted in Batman #181, she was based on pinup model Bettie Page, with a similar haircut and style. She wore green tights and a leafy bodysuit, with a wreath of ivy in her hair- she looked like a mix of Peter Pan and a hula dancer.

As she evolved in DC Comics, however, she began to take on more of a nature goddess-like appearance, transforming into a green-skinned, plant-clad villainess. As designed by Jim Lee in Batman: Hush, one of Ivy’s most popular appearances takes her to a more natural state, covered in strategic leaves and growing vines, with her green, chlorophyllic skin contrasted against her bright red hair. 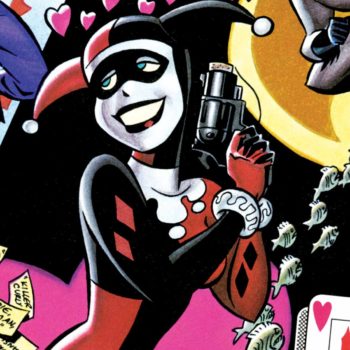 The Cupid of Crime has always had a sense of humor- and fashion! 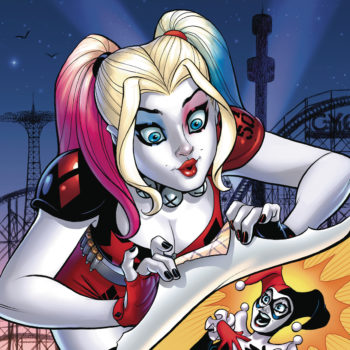 Modern Harley rocks a pair of dip-dyed pigtails and a pale complexion.

Gotham’s very own Maid of Mischief is downright iconic, from her signature speech style to her bold and bombastic costumes. Originally introduced in a harlequin’s hood with a painted face, she’s had several changes over the years that always keep in style; two-toned outfits and perky pigtails are her go-to.

With the advent of Suicide Squad, Harley has taken on some even wilder style, with dip-dyed hair and a permanently pale complexion, contrasting her original makeup and domino mask. Whatever look she’s rocking, Harley Quinn wins us over with her fun sense of fashion! 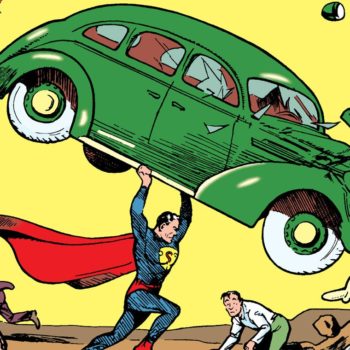 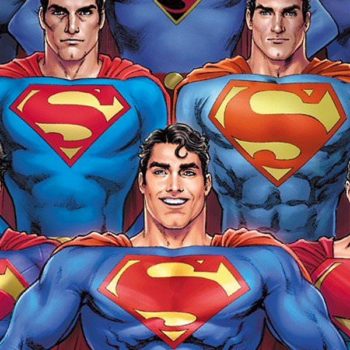 The Man of Steel keeps it consistent.

As with many DC Comics characters, Superman got a radical new look as a part of the New 52 relaunch- in fact, he had several, including the loss of his red trunks, the change to jeans and a t-shirt, and even armor. With the arrival of Action Comics #1000 post-Rebirth, however, the Man of Steel got a highly-anticipated costume change.

Yes, the red trunks returned. After being written entirely out of continuity, the famous crimson underoos returned in the Superman Reborn storyline. But more than a fashion choice, the trunks represented a return to a more familiar form of Superman storytelling, as shepherded by Brian Michael Bendis in his departure from 17 years at Marvel. 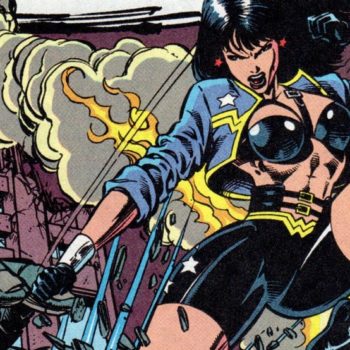 This Amazon has had some Amazon-ly weird outfits. 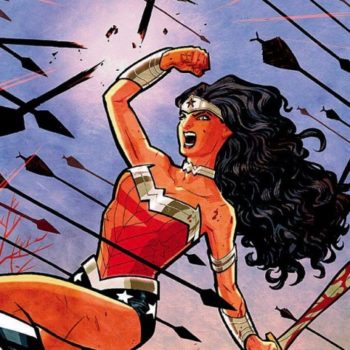 Diana of Themyscira has worn a variety of costumes over the years- some memorable, some not.  Of course she is best known for some variation of her red corset with blue starred trunks, either with or without her gold and silver armor accents- her bracers, tiara, breastplate, and belt being among them.

Less favorably remembered are some of Wonder Woman’s more eccentric looks- from the 90’s “hotpants” and leather jacket to the full white 60s jumpsuit (yes, really). In the New 52 and Rebirth she returned to the classic style with added detail and armor, which led the way to her incredible on-screen realization when Gal Gadot debuted as Diana in Batman Vs. Superman: Dawn of Justice. 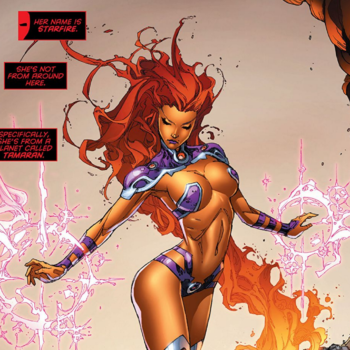 Starfire has sure shown some skin over the years. 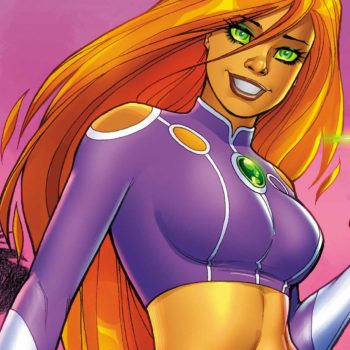 Koriand’r can still soak up the sun in her modest modern costume.

As Tamaranean whose powers come from the absorption of ultraviolet radiation, it makes sense that historically, Starfire’s costumes have been a little less conservative than most. She’s known for her massive hair that transitions into literal fire, along with dainty purple, boots, a thong, and a number of straps that leave most of her naturally orange skin exposed and leave little to the imagination. It got to a point where in the oft-derided 2011 Red Hood and the Outlaws series, her torso was covered by nothing more than purple pasties.

When Starfire was redesigned for a solo series by Amanda Conner, Princess Koriand’r got a bit more material in her outfit- a tasteful cropped purple shirt accompanied her bikini bottoms, with white gloves and white piping on the shirt. The outfit still featured plenty of exposed skin- her midriff, shoulders, wrists, and thighs could all still soak up the sun- but also toned down the extreme game of chicken with comic book censors that was being waged on the pages of DC Comics.

Learn more about Starfire in our Superpower Play-By-Play of the Tamaranean princess! 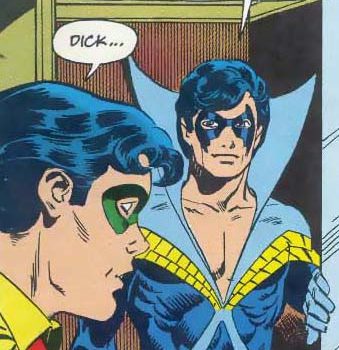 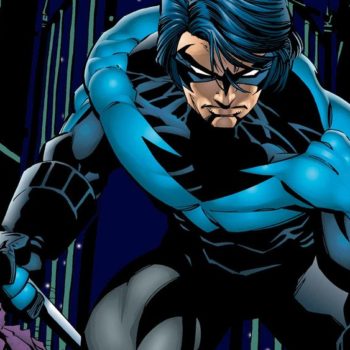 Nightwing toned down the costume and toned up his physique.

When Dick Grayson spread his wings and flew away from the Robin nickname he made some pretty odd costume choices.  As a member of the new Teen Titans, Dick Grayson eventually went on to take up the mantle of Nightwing, known at first for his Disco-era costume.  This look incorporated a two-tone blue bodysuit with yellow accents, and an infamously powder blue, oversized popped collar.

Eventually, artists gave Nightwing a proper redesign, zipping the disco suit closed in favor of a sleek and stealthy black bodysuit with blue shoulder markings, a nod to his earlier design. He took on a more stylized domino mask with whited-out eyes akin to his Bat-mentor, and of course, this outfit became famous for showing off Dick’s shapely physique, from front to backside. 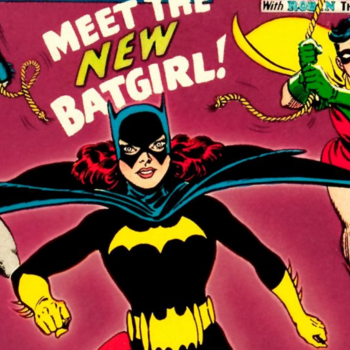 Batgirl’s look has evolved over the years. 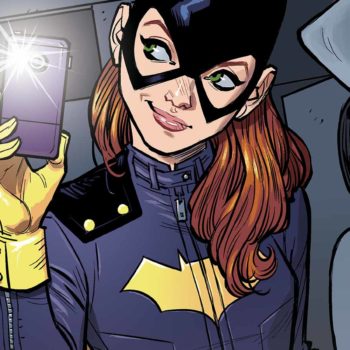 The Batgirl of Burnside blends form and function- thanks, Babs Tarr!

While Batgirl has had a number of notable costumes, almost all including a cape and cowl of some kind none has reflected her style and sensibilities so much as the groundbreaking Batgirl of Burnside look that debuted in 2014 from artist Babs Tarr, working with writer Cameron Stewart.

This costume featured a purple leather jacket, leather leggings with a matte black stripe, yellow snap-on gloves, a snap-on cape, a yellow utility belt, and a hair-covering cowl. Widely praised for being both stylish and realistically functional, this design captured a younger, more fun side to Barbara Gordon’s adventures while still retaining the Batgirl spirit.

So, was our list totally in fashion? Or was this list of costumes a total wash? If we missed someone that you think should be on the list, be sure to send us your opinions.