When someone thinks of Disney Princess movies, they often think of tales of romance, strength, kindness, courage, and perseverance.

It is almost impossible, however, to imagine these stories without the loyal sidekicks that support each respective princess through her mission, whatever that may be. They often provide comic relief, are often simply adorable, and offer unwavering loyalty to their human counterpart through even the most challenging of times.

In honor of Princess Week, here are our top 10 favorite Disney sidekicks:

“I’ve never had any real friends. Except you, Rajah.” 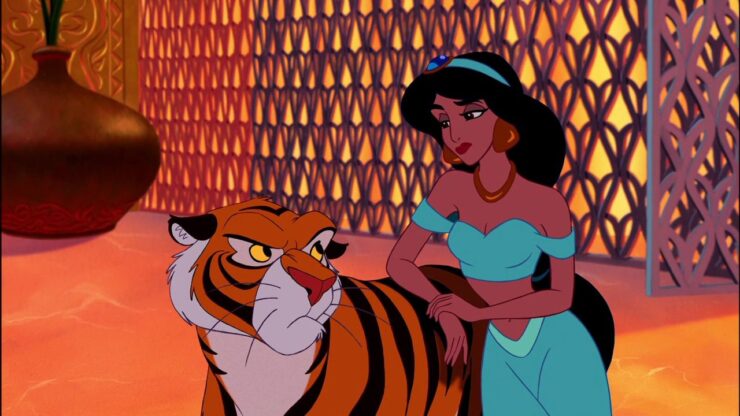 While Rajah does not get a lot of screen time in Aladdin, his close relationship with Jasmine is abundantly clear. Jasmine spends much of her life as the Princess of Agrabah deeply frustrated by how trapped she feels. While her father’s intentions are to protect her from what he believes is a dangerous world beyond their palace walls, Jasmine longs for independence and real connection.

Prior to her daring escape into the city, Jasmine’s most meaningful interactions take place with her beloved tiger, Rajah. From his calming presence to embarrassing unwanted suitors by stealing their undergarments, Princess Jasmine can count on Rajah’s constant support.

“Sometimes our strengths lie beneath the surface. Far beneath, in some cases.”

When a village elder suggests to Moana that Heihei may be of more service to the village by serving as a meal, Moana offers this unconvincing defense of the chicken’s hidden strengths. As it turns out, however, Moana’s instinct to trust in the pitiful poultry ends up being a boon.

As Moana ventures beyond the waters surrounding her island, she finds Heihei has unintentionally stowed away on her boat. Although he spends a decent percentage of the journey needing to be continually rescued by Moana and the sentient ocean, he proves himself to be a welcome traveling companion.

In a pivotal moment, he keeps the heart of Te Fiti from plummeting into the ocean as Moana nears the end of her mission. Admittedly buried immeasurably deep, Heihei’s strength as a sidekick surfaces in the end.

“Meeko, bring that back!” 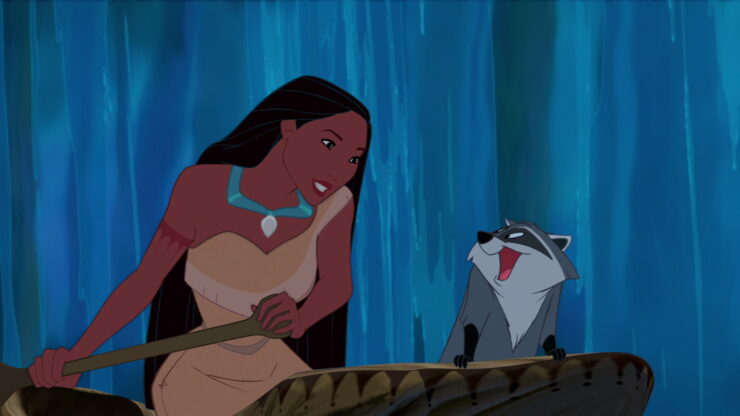 With a penchant for mischief, Meeko brings a great deal of fun into Pocahontas’s life and to the movie as a whole. Ever on the hunt for snacks, Meeko finds John Smith’s compass and takes it for his own.

Pocahontas despairs following the capture of John Smith and goes to Grandmother Willow for counsel. Meeko gives Pocahontas the compass, and in this moment, her path becomes clear. She saves John Smith’s life and prevents further bloodshed.

Meeko, along with Flit and Percy, bestows a final gift upon Pocahontas prior to the movie’s conclusion; her broken necklace, now repaired. The necklace held a great deal of sentimental value, having belonged to her mother prior to her death. Meeko is often a benevolent force of chaos, but always comes through when things really matter.

7. Chip – Beauty and the Beast 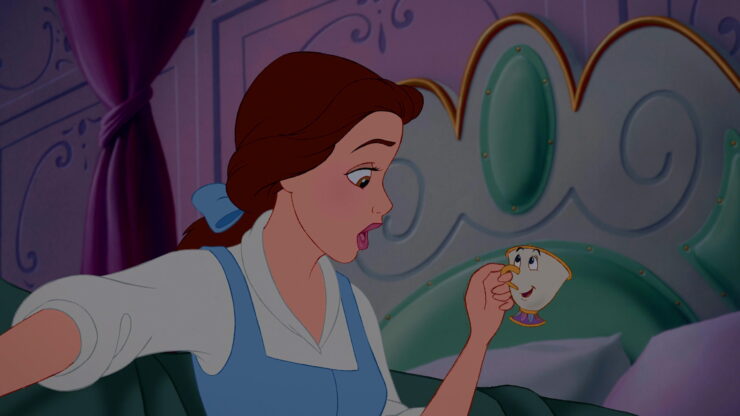 As soon as Belle arrives to the castle, Chip is immediately a friendly, welcoming presence. He grows very fond of her during her time there, and is understandably upset when he finds out that she is leaving with the Beast’s blessing.

When Belle arrives home with her ailing father, Chip emerges from her bag, having accompanied an unwitting Belle on her journey home. Although his original intention is to find out why Belle left them, he ends up being an integral part of saving Belle, the Beast, and the inhabitants of the castle in the end.

Gaston locks Belle and Maurice in their cellar as he and the villagers leave to storm the castle. Chip, in a stroke of genius, uses Maurice’s wood cutting contraption to chop through the cellar door. Belle and Maurice, now free, hurry to the castle. Belle reaches the Beast in just the nick of time, and in professing her love to him as he lays dying, ultimately breaks the curse over the entire castle. Chip’s love of Belle and desire to help everyone have a happy ending help save the day.

6. Ray – The Princess and the Frog 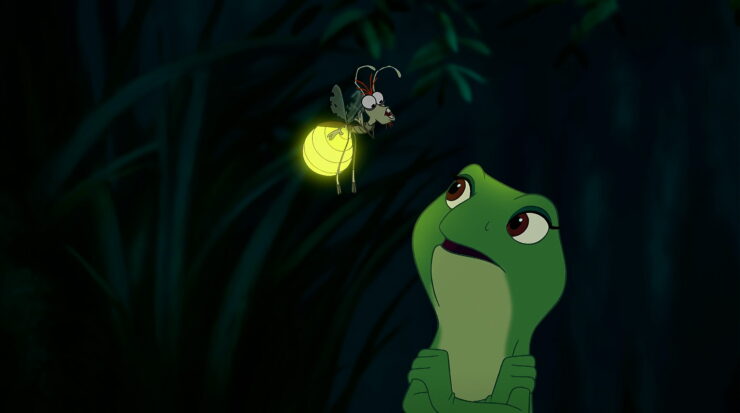 Perhaps one of the sweetest, most endearing sidekicks, Ray is so much more than a firefly hopelessly in love with Evangeline, a star in the nighttime sky. He provides his companions with hope and encouragement as they try to break the curse that has been put over Tiana and Prince Naveen. It ends up being Ray’s undying love of Evangeline that helps Tiana clearly see that Naveen was in love with her.

Beyond his ability to inspire, Ray is a rare exception to most Disney sidekicks; when the stakes are high and he is the only one that can stop Dr. Facilier’s evil plan, he sacrifices his life to save his friends. He whisks the Talisman away, uses his light to banish the shadow monsters in hot pursuit, and meets his untimely end when the Dr. Facilier crushes him beneath his shoe.

Without his courage and sacrifice, the curse may have never been broken. His friends find peace and hope for their dear friend when a new star lights up the sky next to Evangeline.

“You were the one who brought us together, and kept us connected when we were apart.” 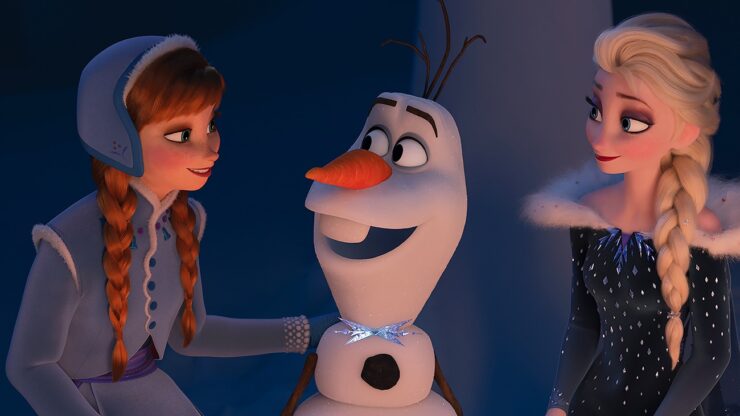 Olaf first makes his appearance when Elsa and Anna are children as a non-sentient snowman. When Elsa flees the kingdom of Arendelle and unleashes her powers on the North Mountain, the first thing that she creates is Olaf, now imbued with life.

Olaf is an important part of Anna and Elsa’s journeys throughout the two feature length films, and his sentimental significance to their entire lives is revealed in the short, Olaf’s Frozen Adventure. As the two sisters lament their lack of holiday traditions, they come across relics from their child and remember that their family tradition was always Olaf.

In spite of the space and shared pain between the two sisters, they were always able to connect through the love they shared for the snowman that likes warm hugs. 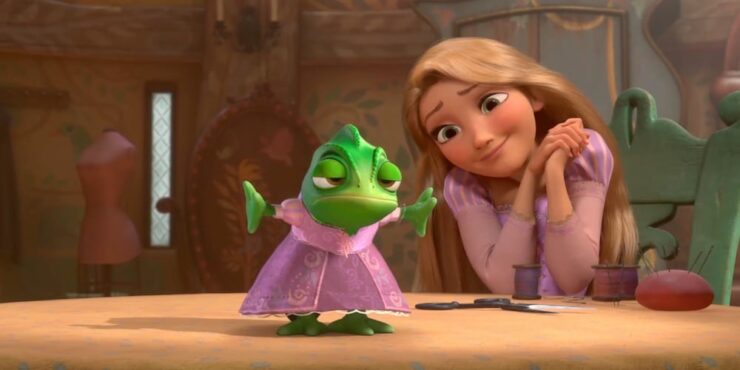 Being stuck in a tower does not offer many opportunities to make friends. With Pascal at her side, however, Rapunzel is able to never feel entirely alone. The chameleon participates in her many hobbies and is a constant, protective force in the lost Princess of Corona’s life. Pascal is also constantly encouraging Rapunzel to venture into the world outside the tower, knowing that this is her ultimate dream.

As the movie draws to a close, Pascal tries to keep Mother Gothel from dragging a chained Rapunzel away and is kicked across the floor for his efforts. Following Eugene’s selfless choice to cut Rapunzel’s long, magical tresses off, Pascal rallies and uses his friend’s shorn off hair to trip Mother Gothel. The devious, selfish villain topples out of the tower’s window and dissipates in a cloud of dust when she strikes the ground.

From hide and seek companion to bodyguard, Rapunzel can count on Pascal to have her back. 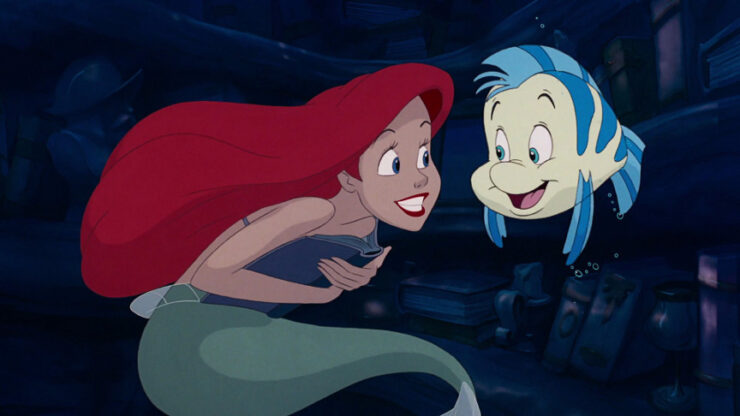 As Ariel’s constant companion under the sea, the little fish had to quickly get accustomed to finding himself in trouble. Knowing what her collection and Prince Eric means to Ariel, he even finds the sunken statue of her beloved Prince to surprise her with.

Ariel is surrounded by merpeople and sea creatures that want nothing more than to tell her to fall into line and embrace her life as a mermaid under the sea. Flounder is by Ariel’s side no matter what, and even when he has his doubts, he supports Ariel in her pursuits and dreams.

Even when Ariel is a human on land, Flounder finds ways to be close to his beloved friend. In a true act of selfless, supportive friendship, when Ariel makes the choice to stay on land and marry Prince Eric, Flounder is there to bid her farewell.

“My ancestors sent a little lizard to help me?” 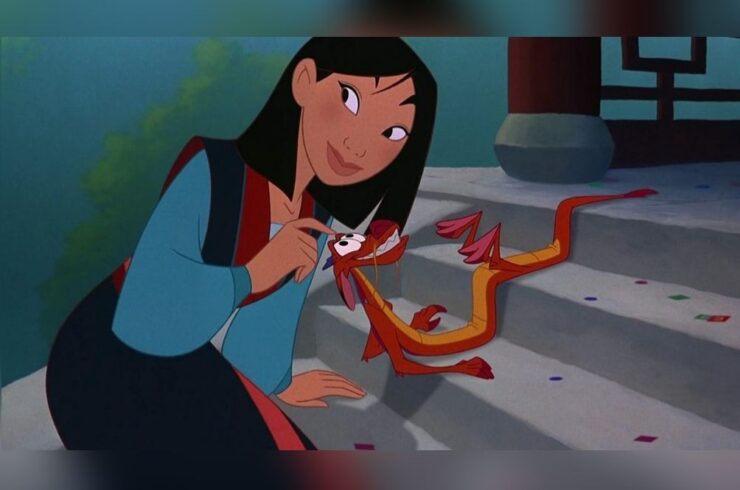 While Mushu’s journey to help Mulan begins with his hopes to reinstate his honor and place as a guardian of Mulan’s family, he ends up becoming truly invested in Mulan’s journey for her sake. He helps her create her identity as a man in China’s army, saves her true identity from being revealed on multiple occasions, and is a constant source of encouragement when Mulan doubts herself or feels lost in her new circumstances.

His abilities as a dragon even come in handy during a critical moment: when Mulan is unable to get a spark to send a rocket into the mountains to bury the Hun army, she uses Mushu’s fire breath to launch the missile and save her fellow soldiers and herself from certain death.

Through thick and thin, Mushu sticks by Mulan’s side and in the end is ultimately rewarded with a place as a family guardian once again.

1. Jaq, Gus, and the rest of the mice – Cinderella 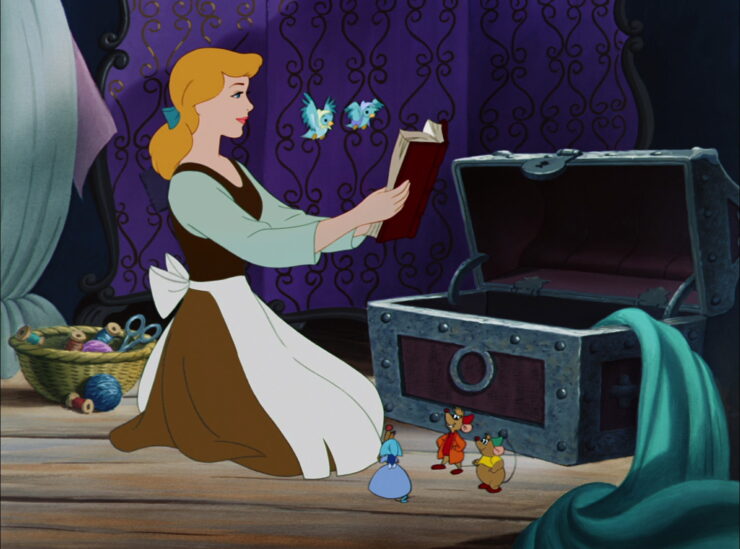 As some of the original animal companions in a Disney Princess movie, these mice really live up to their role as Cinderella’s sidekicks. In a home where Cinderella has no real family or friendship, the mice are loyal confidantes that she can count on. Cinderella and the mice look out for each other in a hostile environment, having a mutual understanding of what it is like to live with others that are constantly out to get them.

Following the ball, the Wicked Stepmother does not want Cinderella spoiling her daughters’ chances of marrying the prince. She locks Cinderella away in the attic and stows the key away in her pocket. Not to be outdone, the mice slip the key out of her pocket and bear it up the winding staircase to their friend, giving Cinderella the chance she needs to try on the glass slipper and make her identity as the woman the Prince had been searching for known.

At every turn, Cinderella’s dreams of escaping her wicked family for the beautiful life she deserves are supported and helped along by her beloved sidekick mice.

The plots of every movie featuring an official Disney Princess are as varied as their princesses. Each young woman has her own aspirations, unique personalities, and personal challenges to overcome.

The one thing they share in common, however, is the enrichment and meaning their sidekicks bring to their lives during the best and worst of times. Before they find their destinies – whether it’s love or adventure or honor – they could count on their friends to help them see it through.

Who is your favorite Disney Princess sidekick? Did we miss any? Let your Geek Sideshow and tell us in the comments! Be sure to join the fanciful festivities of Sideshow’s Princess Week from April 26- April 30!

The Falcon and the Winter Soldier: Our Biggest Take-Aways from the Finale