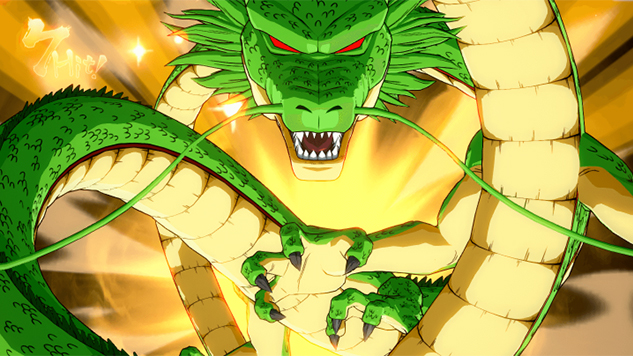 Today, we’re just winging it to count down the Top 10 Fictional Dragons across literature, cinema, and television. These magnificent monsters have acted as fearsome foes, mystical mentors, and even just flying friends to many valiant heroes across the ages.

We’ve balanced the scales, so now read along to find out if your favorite fire-breathing beasts make it into our hoard of treasures.

HONORABLE MENTION: The Dragon from Beowulf

Beowulf’s dragon gets the honorable mention on our list for being the first dragon in modern English literature. While often overshadowed by Grendel and his mother, the dragon presents Beowulf’s final challenge in the third act of this epic poem.

While the other warriors flee in fright at the sight of the dragon, Beowulf and his squire Wiglaf stay and fight the dragon to the death, ending the life of both the dragon and the Geatish hero. This is also marked as the first literary instance of a fire-breathing dragon. 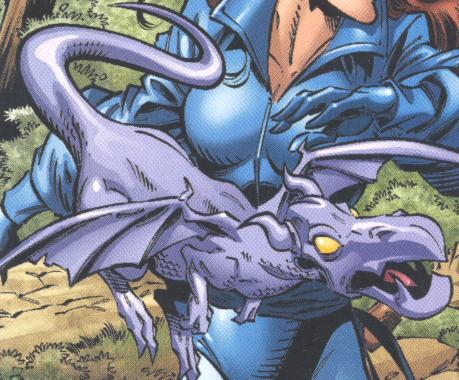 Longtime companion to X-Men member Kitty Pryde, Lockheed is a cat-sized purple dragon from the alien race called the Flock. Kitty named him after the Lockheed SR-71 Blackbird jet when they met in the captivity of the Brood aliens.

Lockheed was known as a brave fighter and hero by his people, and even saved the X-Men from the Brood, after which time he joined Kitty and the other mutants, and has been a member of the X-Men, Excalibur, the Agents of SWORD, and Lockjaw’s Pet Avengers.

Falkor is one of five luckdragons mentioned in The Neverending Story, and is a companion of Atreyu and Bastian.  His is a friendly and dignified dragon, helping Bastian to remember the values of perseverance.  His appearance is both draconic and dog-like, with a long body, large paws, and white fur.

Apart from the ability to breathe fire and their incredible luck in everything they do, luckdragons like Falkor do not possess immense physical strength or magic abilities. Still, Falkor’s loyalty, affection, and memorable appearance all make him worthy of a spot on this list- how lucky!

Norbert, later called Norberta, is a Norwegian Ridgeback dragon owned by Rubeus Hagrid in the Harry Potter series. As a species, the ridgebacks develop their fire-breathing abilities much sooner than other species, making this dragon a little too hot to handle for young Harry and his companions when they visit Hagrid‘s hut.

The dragon’s egg was wagered somewhat illegally in a game of cards, and Norbert/a had to be released to Charlie Weasley’s custody after the dragon became more violent and even bit Ron Weasley‘s hand with its venomous fangs.

Haku, from Hayao Miyazaki’s beloved film Spirited Away, is a spirit being with two forms- one being that of a 12 year old boy, and the other being a massive white dragon who is actually the spirit of the Kohaku River. In his dragon form, Haku has a white scaled body with a seafoam green mane, four legs, and large horns.

As a river spirit, his powers are closely associated with water, but Haku can also fly and he also has an immense knowledge of magic and the spirit world in which Chihiro finds herself trapped. His full name is Nigihayami Kohaku Nushi, which translates to “god of the swift amber river”. 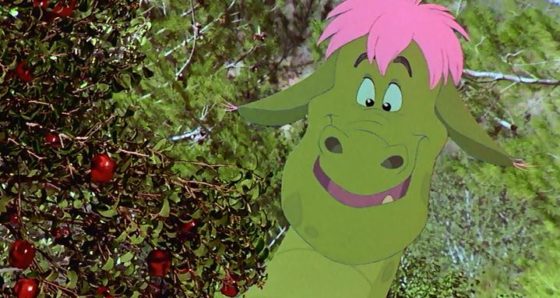 Elliot is the titular dragon of Disney’s Pete’s Dragon- both the 1977 film and the 2016 remake.  He is a large green dragon with purple hair and spines who befriends Pete, the young orphan of the story.  Elliot also has the ability to become invisible, and is fairly clumsy but goodnatured.

Elliot serves as a guardian dragon to children in need, and is fiercely protective.  He will remain with a child as long as they have need of his companionship, but as seen in the film, once Pete has a loving home, Elliot must depart and move on to the next child in need of his help.

Shenron, also called Shenlong, is the divine dragon god of the Dragon Ball series. When all seven Dragon Ball artifacts are gathered, Shenron is able to grant a wish to the wielder who summoned him. He is a massive green lung dragon with antlers and glowing red eyes, and he alternates between being aggressive and impatient, and considerate and understanding, assisting the Dragon Ball holder of how best to make their wish.

For as powerful as he is, Shenron is fearful of Beerus, the god of destruction. And of course, as the series evolves, so does Shenron- Dragon Ball Super introduced Super Shenron, and Dragon Ball GT introduced Ultimate Shenron. 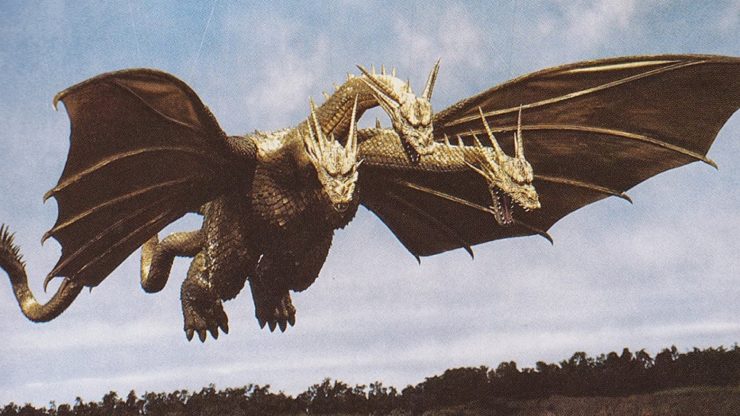 The golden three-headed dragon Ghidorah is one of the most beloved and feared Kaiju of Toho’s monster movies, inspired by the legends of Yamato No Orochi, the 8-headed dragon. Its origin often changes, but one thing is the same across every appearance- Ghidorah is the archnemesis of Godzilla.

In some films, the three-headed dragon is an alien planet killer, while in other versions it is a genetically engineered creature from the future, or even an ancient guardian beast of Japan. King Ghidorah frequently ranks high on fictional monster lists for its impressive presence and sheer power, and the king kaiju will feature in this year’s Godzilla: King of the Monsters film.

Dragons hadn’t been seen for years as the Targaryen line began to dwindle in Westeros, following a period of epic conquest.  During the War of the Five Kings, Daenerys Targaryen was gifted three petrified eggs as a wedding gift in her marriage to Khal Drogo of the Dothraki.  When she carried the eggs into her husband’s funeral pyre, they mysteriously and miraculously hatched into the first three dragons to appear in generations.

Named for various important figures in Daenery’s life, Drogon, Viserion, and Rhaegal are the prominent dragon figures featured in the Game of Thrones television series, along with George R. R. Martin’s A Song of Ice and Fire series.  Drogon, Daenerys’ own mount, was named for Khal Drogo and is the largest, most aggressive of the three dragons.  Rhaegal was named for her brother Rhaegar, and has no rider but obeys his mother’s commands.  Finally, Viserion was named for Viserys, and his fate is a series spoiler! 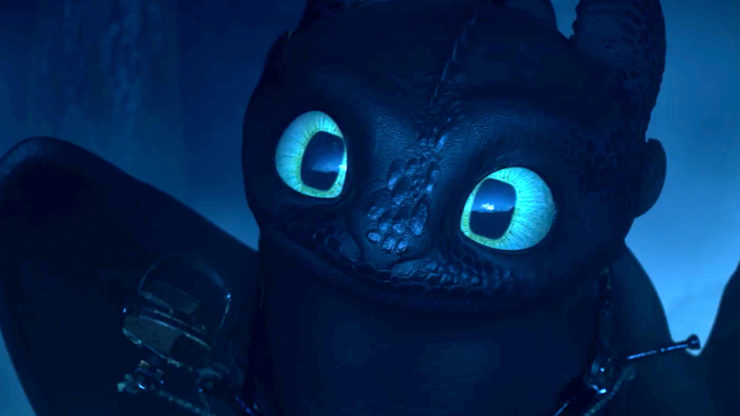 While Toothless also starred in the How to Train Your Dragon book series, the world fell in love with this deadly (but adorable!) dragon in the DreamWorks HTTYD film trilogy.  Upgraded from a common green garden dragon to a sleek and mysterious Night Fury, Toothless is described as the last of his kind.  With jet black scales and massive wings, he is a natural predator in the world where dragons and vikings collide.

But he’s just so cuuuute!

Inspired by a number of animals- not just lizard-like ones!- Toothless reminds many fans of their beloved pets.  And his evolution throughout the trilogy, growing up alongside Hiccup, the son of the viking leader, is amazing.  After being injured in battle, the two must learn to take care of each other and they grow to see that the world isn’t always the way it first seems.  Their relationship overall is what solidifies the How to Train Your Dragon trilogy as a modern classic.

Smaug is the legendary literary dragon from J.R.R. Tolkien’s 1937 novel The Hobbit.  Described in-text as, “the greatest of the dragons of his day,” and, “a most specially greed, strong, and wicked worm,” Smaug is a powerful and fearsome foe.  He is most known for invading the dwarf kingdom of Erebor, where he guarded a vast mountain of treasure.

It’s well known that Tolkien taught Anglo-Saxon at Oxford University, and was an expert on Beowulf, which became one of the deepest sources of inspiration for The Hobbit.  Smaug shares many traits with the dragon at the end of the Beowulf saga, and has many additional powers as given to him by Tokien’s imagination- intelligent speech, a hypnotic presence, and a deep memory for every item in his hoard.