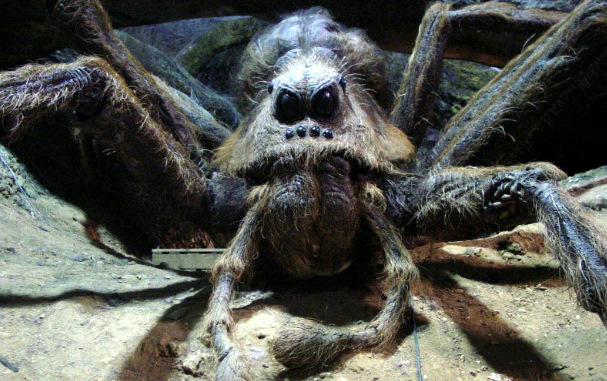 Hope you aren’t arachnophobic! This week, we asked the Let Your Geek Sideshow official Facebook group to help us decide the Top 10 Fictional Spiders. These eight-legged entities are mystical, monstrous, and even a bit mischievous, spinning threads throughout our favorite works of film, literature, gaming, and even mythology.

Follow along to find out which creepy crawlers the fans decided to include in this tangled web. Let’s get started.

From Marvel Comics, Spider-Ham was once a simple spider named just Peter, who was bitten by a radioactive pig named May Porker. Once bitten, he became Peter Porker, the spectacular Spider-Ham and a scientific genius in his own right. He had the combined abilities of a spider and a pig. Originally just a part of Marvel parody comics, Spider-Ham recently made his big-screen debut in Spider-Man: Into the Spider-Verse from Sony.

Kumonga is a mutant spider-kaiju from the Toho film Son of Godzilla. Also known as Spiga, this giant spider monster has poison stings and can shoot massive webs to grab his prey. In some depictions, he is also capable of jumping great distances. While he was an antagonist to Minilla (aka Baby Godzilla) in his original appearance, he later became an ally to humanity in Destroy All Monsters. Kumonga has appeared in a number of Godzilla films, as well as video games and literature.

9. The Spiders from Mars

So technically, the Spiders from Mars are people- they are David Bowie’s backing band from numerous albums, including Ziggy Stardust and the Spiders from Mars. Their name was taken from an instance reported in the 1950s, where a stadium crowd thought they had spotted a UFO in the sky, when in actuality it was a series of migrating spiders who were traveling on wind currents. There are, however, natural gas geysers on Mars that are called “spiders”.

Created by Gary Gygax for Dungeons and Dragons (specifically the World of Greyhawk setting), the goddess Lolth is the Demon Queen of Spiders and the primary goddess of the drow race. She is known by many names- Queen of the Demonweb Pits, the Weaver of Chaos, the Spider Queen.

Arachnids are her sacred animal, and is often depicted as either a massive spider with a woman’s head, or a woman who possesses a spider’s abdomen and legs from the waist down. Lolth is chaotic evil, and is considered one of the greatest villains in D&D history.

In Greek mythology, Arachne was a shepherd’s daughter who was exceptionally skilled at weaving. She boasted that she was better at weaving than the goddess Athena, who was affronted and took the challenge. Her hubris led to an official weaving contest between the women.

Arachne created a tapestry that insulted the gods, while Athena’s depicted the fates of mortals who challenged gods. Athena was enraged and shamed the girl, who later hung herself. In death, Athena turned her into a spider so that she would hang forever on her own web, endlessly weaving with spider silk. Many versions of the myth have different in their account of which woman actually won the weaving challenge.

Anansi the trickster is an important figure in African folklore, appearing in the shape of a spider. Many of the Anansi stories were passed on through oral tradition, telling of his cunning and prowess that often turned the tables on those who would oppress him. Anansi was also said to be the representation of all stories, using threads to bind these spider tales together.

He rescued all stories in the world from the Akan Sky-Father Nyame, he stole food from Death, and tried to steal all the wisdom in the world but ended up dispersing it to all the people. The Anansi myth has inspired many depictions of the spider character across comics, literature, music, and television.

Ungoliant is the Dark Spider in Tolkien lore, a primordial force of evil that takes the form of a spider. She is the mother of Shelob the Great Spider, and the ally of Melkor, also known as Morgoth, the first Dark Lord. Ungoliant drained the Two Trees of Valinor of their sap and poisoned the trees with her immense hunger.

However, she eventually turned on Morgoth and was attacked by Balrogs until the Dark Lord called them off. After she fled, Ungoliant infested the land with her offspring. She is said to have devoured herself and ultimately perished at her own hand.

Though IT usually took the form of Pennywise the Dancing Clown, according to Stephen King’s novel, IT’s true Earth form was that of a giant spider that lived deep below Derry, Maine. While the creature is thought to have no gender, when the characters of the Losers Club see it as a pregnant spider, implying that IT is female (and even that there may have been a male of its species in existence).

IT is capable of transforming into just about anything, but the spider form is the closest that the human mind can come to comprehending its form that is not the insanity of the Deadlights.

Aragog is an Acromantula, a magical species of spider in the Harry Potter universe. The species originated in Southeast Asia, bred to guard treasure hoards for wizards. Aragog was capable of human speech, and was regarded by the Ministry of Magic classification as a Beast rated XXXXX, known to be a wizard-killer and impossible to train. Aragog had a wife and a number of children that lived in the Forbidden Forest, and had a taste for human flesh like other members of his species.

Aragog’s mortal enemy was the basilisk of Salazar Slytherin, encountered in Harry Potter’s second year at Hogwarts. Aragog eventually died in Harry’s sixth year at school, and a small funeral was held for him while his venom was taken by potions professor Horace Slughorn.

2. The spider that bit Peter Parker

While this spider has no name, it has a massive history behind it, being responsible for the creation of Spider-Man, as well as Silk in Earth-616, and countless other spider-heroes across alternate realities. This spider got caught in a radiation test at a science demonstration at General Techronics Corporation and bit Peter Parker before it died, causing Peter’s DNA to change and give him his abilities.

The spider also transformed Cindy Moon, and classmate Carl King ate the dead spider and became a mutated hive-mind of spiders. Across the Spider-Verse, this spider bit Gwen Stacy and turned her into Spider-Woman, now Ghost Spider on Earth-65. In Earth-1610, Miles Morales was bitten by a spider mutated by Oscorp, and Miguel O’Hara transformed his DNA based on Peter Parker’s own genetic code.

From Tolkien’s Middle Earth lore, Shelob is a demon in the form of a spider, the distant daughter of the primordial force Ungoliant. Her lair is Torech Ungol, below Cirith Ungol, which means the pass of the spider, which leads into Mordor. She was Ungoliant’s last child, and was a rather large spider, about 15 feet wide. Shelob has a stinger that she uses to paralyze her victims and her hide and webs can resist swords of regular men.

The blade Sting is able to cut through her webs, and she is thwarted by Samwise Gamgee as he tries to rescue Frodo from her clutches in the Third Age. Shelob’s main weakness is her eyes, and her offspring are the Great Spiders of Mirkwood. She’s also known by many names including Shelob the Great, Her Ladyship, and Her Sneak. 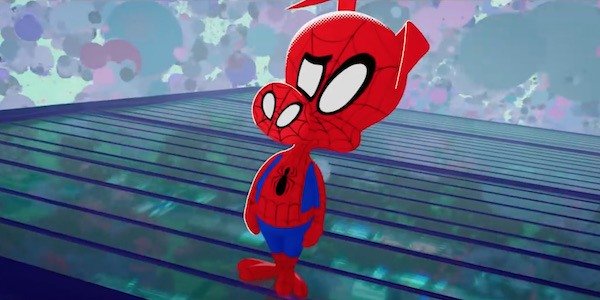 So, did we weave together a cohesive countdown? Or was this list just cobwebs? If we missed someone that you think should be on the list, be sure to send us your opinions. That was the Top 10 Fictional Spiders, as decided by the fans!