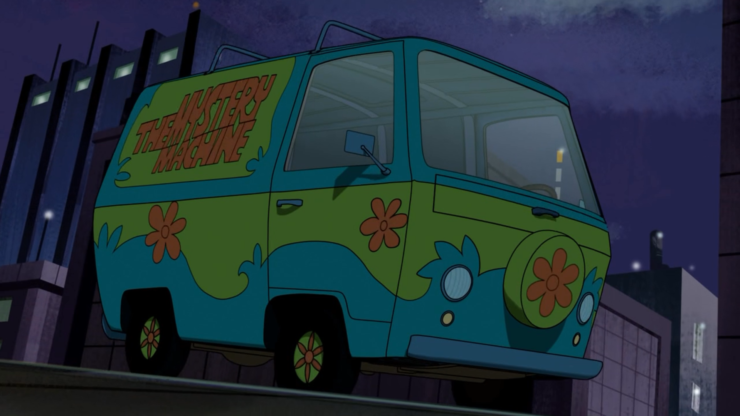 Rev your engines as we count down the Top 10 Fictional Vehicles. These radical rides are some of the coolest cars and conveyances that pop culture has to offer. They get our heroes from point A to point B with style, speed, and high tech that outstrips the competition.

Time to call shotgun and ride along with us as we reveal which vehicles raced to the top spot on our list.

The Invisible Jet, or Invisible Plane, is a method of transport initially used by Wonder Woman, although it hasn’t appeared regularly for a while. For a time, it was a a necessary mode of transport for her as she could not fly. It was dependent on the wind currents to move, which meant that in still weather, Wonder Woman could become trapped and the jet would plummet to the ground. Different iterations would also not cloak Diana herself, so while the jet was invisible, she herself was entirely visible.

In Post-Crisis continuity, Wonder Woman can fly, eliminating the need for the jet. The jet was also given a revised origin, coming from an alien morphing crystal from the Lansinarians. The plane in this form is intelligent and can respond to Wonder Woman’s thoughts, although for a time she did not realize it was sentient.

K.I.T.T. or the Knight Industries Two Thousand belongs to crime fighter and spy Michael Knight. K.I.T.T is equipped with an artificial intelligence, as well as a host of other highly advanced technological enhancements. It is practically indestructible, and its primary function is the preservation of human life… specifically Michael Knight’s life.

There are so many advanced features, buttons, and switches inside the car that when Michael sees it for the first time, he says, “it looks like Darth Vader’s bathroom.” There are few cars as high tech as K.I.T.T. and even fewer that truly show compassion for their “pilot”.

Marvel’s Helicarrier is an immensely large flying aircraft carrier that serves as the signature ship and mobile command center of the fictional intelligence agency SHIELD. Though it has been redesigned over the years, its original concept was created by Jack Kirby for the Nick Fury, Agent of SHIELD series in Strange Tales #135, and through all of its upgrades it remains a crucial part of the agency’s operation.

Various Helicarriers in the Marvel Universe have been named Luxor, Hermes, the Iliad, Argonaut, Odyssey, and more. This behemoth vehicle also made numerous appearances in live action, most notably in Marvel’s The Avengers as well as Captain America: The Winter Soldier, but the craft’s live-action debut was actually in the 1998 TV movie Nick Fury: Agent of SHIELD. It even appears in Deadpool, as the setting for the final battle- but it’s not identified as the Helicarrier due to legal issues. 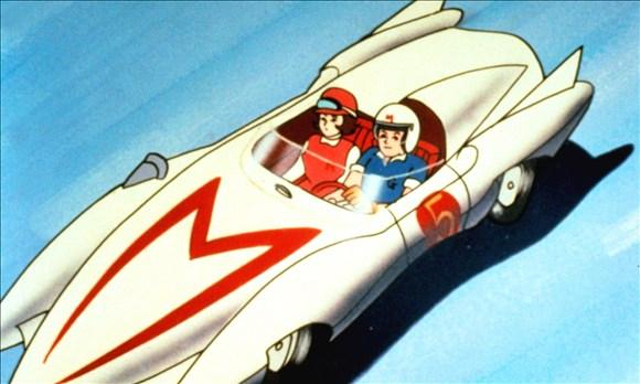 The Mach Five is “the most advanced racing car in the world”. The Mach Five belongs to Speed Racer, the Demon on Wheels. There are seven buttons of the wheel. Each letter aligns with the button’s function. This cartoon car was absolutely iconic, and showed us how creativity and ingenuity can save the day.

Control A releases powerful jacks to boost the car up. Control B sprouts grip tires that let the car drive over any terrain. Control C extends cutter blades from the front of the car to clear any obstacles out of the way. Control D releases a special deflector that’s bulletproof and water tight. Control E is for special evening illumination, that shines light on more than the average car can. Control F is for “Frogger Mode” or underwater mode. Control G releases a Go Homing Robot, that carries messages and pictures to or from anywhere.

Like, zoinks! The Mystery Machine is the main method of transport for Mystery Inc., also known as the Scooby gang in the Scooby-Doo animated series. This 60’s era panel van is painted blue with a green stripe and orange accents. Its interior is often adapted to fit whatever situation the gang needs at the moment- in some of the animated films it is even transformed into a monstrous hotrod thanks to the bizarre supernatural circumstances of the mystery.

Though it’s not the largest or most spacious of these fictional vehicles, the Mystery Machine is groovy, comfortable, and familiar to fans who followed the adventures of Shaggy, Scooby, Daphne, Velma, and Fred as they tracked down ghosts and monsters and solved countless mysteries together.

James Bond is iconic enough as is, but his car is something completely different. The Aston Martin DB5 has bulletproof windows, revolving number plates so he can travel to any country, radar and tracking for up to 150 miles away, smoke screens, oil slick, machine guns, tire-shredding blades, and even a passenger ejector seat!

While many of these other cars are fantastic and wonderful, something felt very grounded about the Aston Martin DB5. It was a car that you could actually buy! The special effects at the time were grounded and looked truly realistic. The Aston Martin DB5 just radiated cool. 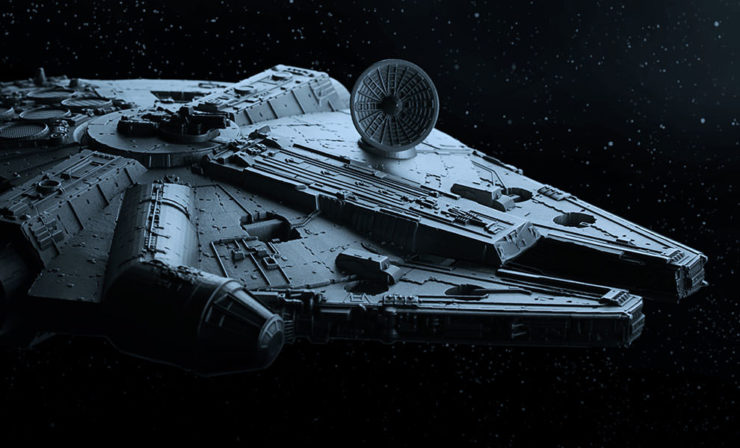 The fastest hunk of junk in the galaxy has already clocked in at #1 on our Top 10 Star Wars Vehicles countdown, which is available for podcast listening now from Let Your Geek Sideshow. This iconic vehicle has changed hands over the years from smugglers to scavengers, but remains most tightly associated with Han Solo and Chewbacca.

This legendary spacecraft is classified as a Corellian light freighter, known for its tight handling and evasive capacity- with the right pilot at the helm, of course. It’s the ship that made the Kessel run in less than twelve parsecs and represents a sense of home and belonging for Star Wars fans across generations. It was given a deeper backstory in Solo: A Star Wars Story, and currently serves as the hub for the surviving Resistance personnel following the events of The Last Jedi.

The USS Enterprise is a character of its own. It’s one of the first spaceships ever depicted in pop culture, and it’s by far the most unique. It’s meant to explore, not just go from A to B. It’s meant to seek out new life. It’s meant to learn about the unknown.

Not only that, the designers that worked on Star Trek worked on every detail on this ship. It felt like an exploration than you could really go on! While The USS Enterprise went through many different versions and updates, the goal was always peaceful. It was incredible for fans to be able to look to Sci-Fi without being forced to look at giant wars or violence. Instead, the show and the ship promoted meaningful and important conversations. The USS Enterprise helps the fans find meaning themselves.

Like the Ghostbusters themselves, the iconic ECTO-1 vehicle is a strange but reliable vehicle, known for its distinct body design and recognizable siren wail. The car’s actual make is a 1959 Cadillac made by Miller-Meteor, a combination of both an ambulance and hearse in the end loader style.

It was purchased secondhand, with a number of deficiencies in the brakes, shocks, transmission, mufflers, and more. Dr. Ray Stantz was able to make repairs on the car, though, and soon the ECTO-1 became a portable ghost-busting machine, spacious enough for traps, proton packs, and the crew’s other equipment. The car itself has taken on a lot of character, and in early drafts of the film it even had extranormal abilities. It was also originally going to be painted black, which made it appear sinister and was difficult to film during nighttime shots. 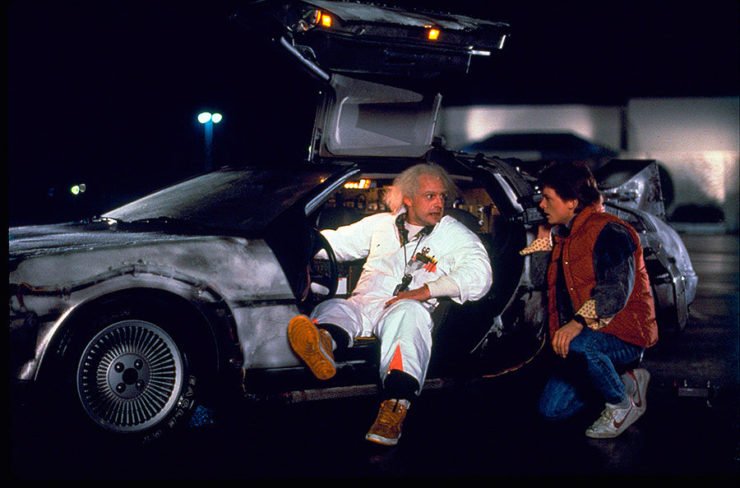 Doctor Emmet Brown officially tested his DeLorean Time Machine on Saturday Morning, October 26th 1985 at 1:18 am. He strapped in his dog Einstein and sent him on a trip—the first trip of its kind. And as soon as that baby hit 88 miles per hour, we saw some serious…. Temporal displacement!

Lots of cars on this list reveal who we are as humans, and what we think is cool, or impressive. But Doc Brown’s DeLorean shows us what we want to be. It uses plutonium to power the car for a while, but eventually it’s able to use any sort of garbage as a fuel. It looks towards the future that we want and The DeLorean reminds us that we can constantly make a change in our lives to live in the future that we want.

Housed in the Batcave, driven by Batman, the Batmobile is the ultimate fictional vehicle thanks to its presence in pop culture. First appearing in Detective Comics #27 as an ordinary black car, it has morphed into an appropriate ride for the Dark Knight himself. The car’s bat motif is evident through every redesign, as it has become a black armored vehicle, occasionally with wing-shaped tailfins and even more infrequently with a stylized bat-face on the front.

The Batmobile has always evolved to suit Batman’s needs and has appeared alongside him in practically every depiction of the world’s greatest detective. It has been a high-speed racer as well as an armored tumbler, a prisoner transport system, and even a mobile crime lab. In Adam West’s live action series, it became much campier and sillier, before it continued into develop into a much more serious and more armored utility vehicle. It has guns, cannons, shields, lasers, riot suppressors, gyroscoping wheels, and a highly advanced steering system.

So, did we steer this countdown in the right direction? Or should we have called in some roadside assistance? If we missed something that you think should be on the list, be sure to send us your opinions.