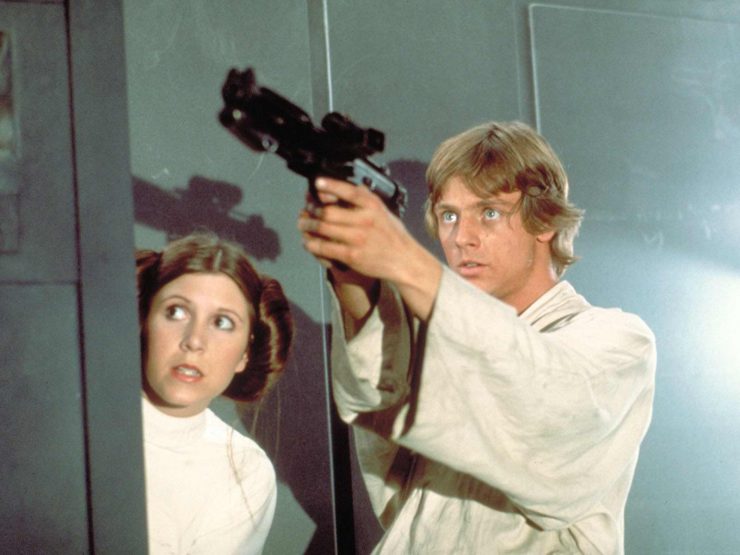 This week, we’ve used the Force to bind together the Top 10 Luke Skywalker Moments in Star Wars.  Will we hit the target and save the galaxy, or is it time for the Jedi to end?

10. “But I was going to Tosche Station to pick up some power converters!“- Farm Boy Luke

While this moment is often joked about due to Luke’s whining over something trivial, it serves to show how little Luke knows about what lies in the galaxy beyond.  It’s a reminder that one of the greatest heroes came from so little, and started the saga so simply as a farm boy.

By the time we get to The Force Awakens, a new generation of heroes are stepping up into their own roles.  Still, their exploits are inspired by the bravery of characters like General Organa, and of course, the legendary Jedi Luke Skywalker.  This moment shows just how much of an impact Luke’s actions have had throughout the galaxy.

8. “You will bring Captain Solo and the Wookiee to me.“- Infiltrating Jabba’s Palace

Luke begins to show the full scope of his Jedi abilities in Episode VI, tricking Bibb Fortuna into letting him inside Jabba‘s gangster palace.  This is a stylish and exciting time for Luke showing off the skill, resourcefulness, and heroism he’s honed throughout the trilogy thus far.

7. “I used to bullseye womp rats in my T-16 back home; they’re not much bigger than two meters.“- Luke’s Abilities as a Gunner

No longer just a farm boy from Tatooine, here Luke has confidence in his abilities to aid the Rebellion in the destruction of the first Death Star.  This bravery and assurance set him on the path to ultimate heroism, proving that the galaxy’s heroes could come from anywhere, with hope and the willingness to do good.

6. “The Force is strong in my family.“- Luke’s Lineage

This quiet, contemplative scene begins to solidify the larger picture of the original Star Wars trilogy and the galaxy as fans knew it.  Shot against the nighttime blues of Endor, Luke reveals his connection to both Vader and Leia, sharing a beautiful sibling connection before the ultimate face-off against Vader.

Training with Yoda on Dagobah was formative to Luke’s identity as a Jedi Knight, as well as a mature member of the galaxy at large.  Overcoming his disbelief in what can be accomplished through the Force teaches him to let go and trust in his master’s teachings, allowing Luke to eventually become a skilled Jedi and galactic legend.

This wordless scene is one of the most iconic shots in all of Star Wars, scored by the swelling sounds of the Force Theme, cementing the film’s status as a space opera.  It’s a call to action for our hero Luke, but also for the viewers who are looking out into the binary sunset over Tatooine’s horizon, ready to discover what larger galaxy awaits beyond the sands.

3. “The Rebellion is reborn today.  The war is just beginning, and I will not be the last Jedi.“- Holding off the First Order on Crait

This moment in Star Wars: The Last Jedi showed Luke’s Jedi journey coming full circle, as he passes on his teachings in order to continue the legacy of the Jedi.  He peacefully holds off the First Order’s onslaught, using all of the skills he has learned and honed over the years, also proving to Kylo Ren that there is much that the Dark Side cannot accomplish through brute strength alone.

In the cave on Dagobah is where Luke has his first real encounter with the Dark Side of the Force during his training with Master Yoda.  He has to face the evil within him, and without him, as he is surrounded by the mysterious Force. This scene is based in Plato’s allegory of the cave, representing Luke’s confusion between what is real and what is false.

1. “I am a Jedi, like my father before me.“- Luke Truly Becomes a Jedi

Moreso than any other display of his powers, this moment is when Luke truly embodies what it means to be a Jedi.  He refuses to fight his father, Darth Vader, and redeems Anakin Skywalker while resisting the Emperor’s machinations and facing possible death.  It is a moment filled with empathy and compassion, overcoming evil to honor the ways of the Jedi. This oft-quoted line is a fan-favorite, and within the trilogy itself it remains one of the most powerful declarations Luke Skywalker makes.

Did we miss any of your favorite Luke Skywalker moments? Let Your Geek SideShow and tell us in the comments!