Syfy’s Resident Alien is the little-show-that-could, one that most approached with trepidation and low expectations. The sci-fi/fantasy channel is infamously known for bringing down the cancellation ax on some quality programs, so why get attached when the inevitable is lurking around the corner?

For me, I expected it to be the Alan Tudyk show, wherein the Powers That Be propped him up and allowed everything else to fall by the wayside. Who needs a solid narrative and multifaceted supportive characters when you can have Tudyk act weird on screen for an hour every week? 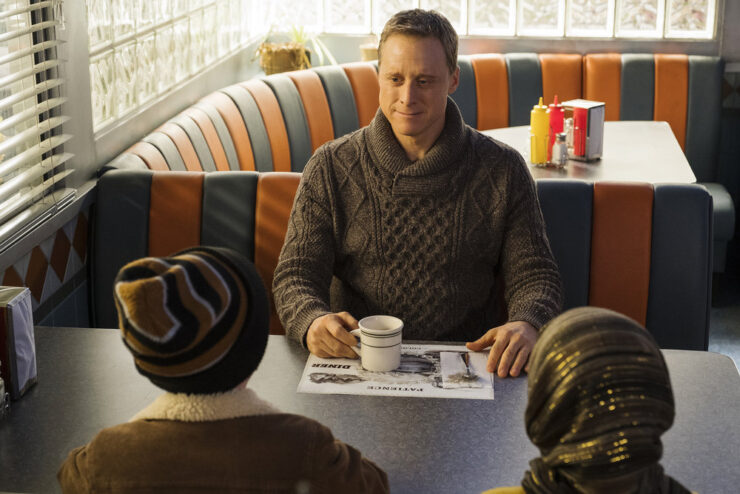 But I was wrong. Resident Alien burrowed itself in my heart from the first episode on. Not only does Tudyk churn in a career-best performance, but the rest of the cast also delivers the goods. The story is intriguing, rife with equal parts humor and heart. I was smitten. Thankfully, Syfy renewed Resident Alien for Season 2, so we’ll get more shenanigans with Harry Vanderspeigle and the residents of Patience, Colorado.

So, in honor of the stellar first season, I’ve curated a list of my personal highlights from Resident Alien. Spoilers abound, so peruse at your own peril.

Harry Having Sex for the First Time (as a Human)

This scene had me in tears from laughing so hard. When Harry first crash lands on Earth, he takes on the form of a human and teaches himself how to talk by watching Law & Order reruns. Everything he learned about human behavior is from the inimitable Jerry Orbach and the mean streets of New York City.

Fast forward to the arrival of the real Harry Vanderspeigle’s wife, Isabelle (Elvy). She has no clue that her real husband has been murdered and replaced with an extraterrestrial being.

Harry decides to hop on the fun time bandwagon and attempts to seduce her, which inexplicably does the trick. The end result? A roll in the hay with a bewildered Harry. The sounds he emits are nothing short of hysterical. I imagine that bloopers definitely exist for this bit, especially considering how ridiculous Tudyk is here.

Resident Alien spends the majority of Season 1 keeping Harry’s secret under lock and key to the majority of the main characters, save Max (Judah Prehn). However, it’s a slow and steady snowball effect: an accumulation of Harry’s idiosyncrasies and growing suspicion from the townsfolk. By episode eight, Harry finally discloses his secret to Asta (Sara Tomko), inarguably his first human best friend. It’s a pivotal moment in the show’s first season.

Initially, she’s frightened of him — he is slowly reverting back to his alien state before her eyes — but eventually, Asta accepts Harry for who he really is. She even fights tooth and nail to keep him alive, enlisting her father, Dan (Gary Farmer), in the process.

Harry’s Emotional Scene With the Ghost of the Real Harry

Throughout the course of Season 1, our titular character has intermittent hallucinations involving the decaying corpse of the real Harry Vanderspeigle. Harry encounters his fair share of human emotions and grapples with the complexities of them all. Even after the real Harry’s body is destroyed, Harry still visualizes the corpse berating him and belittling him. Dead Harry accuses our Harry of failure — he was supposed to find his device that’s capable of eradicating humanity.

However, even after locating it and repairing said device, Harry is reticent to pull the trigger. Dead Harry believes that Harry’s too weak to do what needs to be done. We see our Harry cry for the first time as he struggles with his own burgeoning humanity. It’s a surprisingly poignant and heartbreaking performance from Tudyk.

Have you ever tried climbing up a steep cliffside with a broken wrist? In the same episode that Harry confesses his secret, D’Arcy (Alice Wetterlund) heroically fights to free her friends from entrapment in a volatile glacial pass. She’s knocked unconscious, breaks her wrist, and attempts to overcome her own inhibitions.

Finally, she reaches the top of the cliff and successfully gets Harry and Asta out of harm’s way. Wetterlund imbues D’Arcy with a vulnerability that we hadn’t seen from her until this point. It’s touching, inspiring, and badass.

Who doesn’t love a good impromptu duet? Liv (Elizabeth Bowen) and Sheriff Mike (Corey Reynolds) belt it out for the masses when the latter attempts to persuade Liv into rejoining the force as his deputy. The best part? Even amid the tender moment, even when Mike finally casts aside his hubris, he still attempts to upstage her. 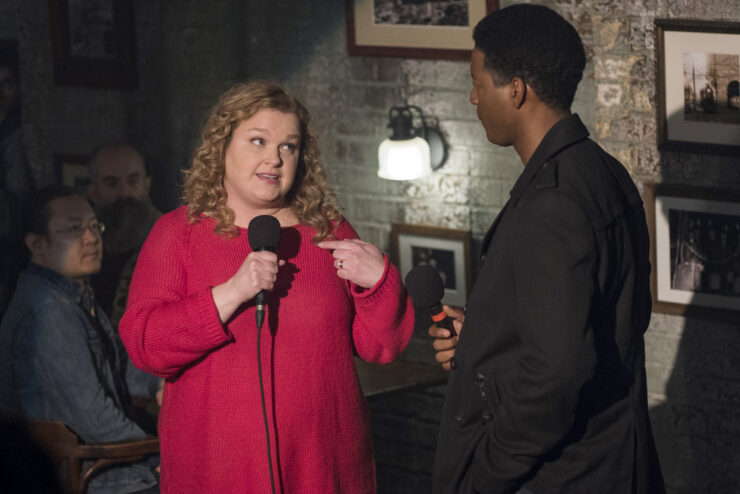 Of course, it helps that Reynolds boasts impeccable Broadway vocals and he knows how to use them. Bowen plays an excellent “straight” character to Reynolds’ “extra” persona. I’d watch a spin-off featuring Liv and Mike as they take on crime in Patience.

Resident Alien is known for its inclusivity and much-needed representation, especially of the Indigenous community. In fact, one of the main characters is Native. Max’s friend, Sahar (Gracelyn Awad Rinke), is a Muslim girl who sports a headscarf.

Undoubtedly, she’s one of the best supportive characters on the show. Besides Max, Sahar knows about Harry’s true identity. She’s not afraid to put a formidable alien in his place. There’s one moment wherein Sahar is riding her bike down the street. The bit plays out in slow motion while accompanied by a swelling orchestral score. Her headscarf flows freely behind her, representing a superhero cape. It’s magnificent and touching.

Ben and Kate Fighting Off Lisa and David

Ben (Levi Fiehler), the harried mayor of Patience, and his wife, Kate (Meredith Garretson), come together to kick major butt when their house is under siege. Ben spends the majority of the season questioning his strength and his assertiveness. He struggles with stepping out of his comfort zone.

However, when Max and Sahar may be in danger courtesy of antagonists Lisa (Mandell Maughan) and David (Alex Barima), Ben’s protective instincts kick into high gear. We see a montage play out of Ben and Kate smacking Lisa and David with various kitchenware. It’s simultaneously humorous and badass.

Harry utilizing Law & Order as his blueprint for humanity never fails to make me laugh. He incessantly drops references to the show and even hums the theme song from time to time. Additionally, there’s a dream sequence where he gets a Jerry Orbach tattoo, and I’ve never seen a need for a JO tattoo until that scene. I’ve been converted.

It’s such a fun little detail that’s peppered throughout the first season and dressed in well-executed Easter eggs.

Harry and Asta Hanging Out at the Alien Convention

Harry and Asta’s friendship is so pure. In episode nine, they attend a nearby alien convention. Harry hopes to retrieve what he needs to fix his humanity-killing device, but Asta doesn’t know that. While at the con, Harry gives Asta a crash course in all things extraterrestrial: which aliens are jerks, which ones are nice, and which species are downright terrifying. 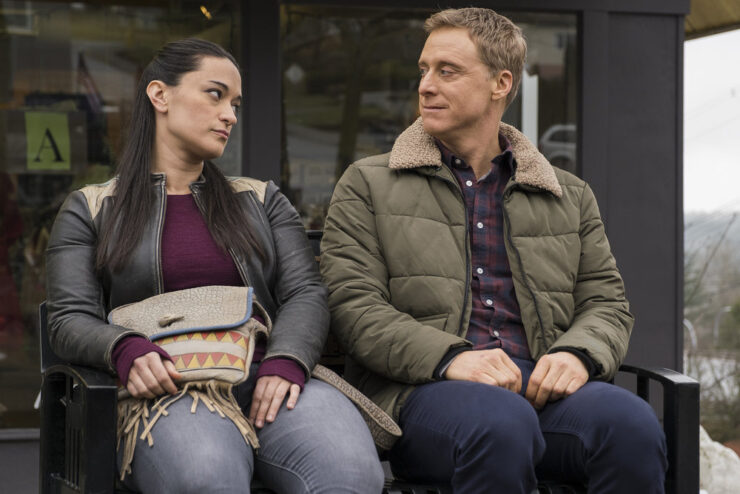 He also debunks the pervasive conspiracy theories to which they’re subjected throughout the day. Asta seizes a moment to impart her own alien story to the audience, citing that her experience was nothing but awesome. Of course, Harry’s starting to question his role in the decimation of the human race.

Harry meets the Aliens dude! It was only a matter of time before Resident Alien brought Giorgio Tsoukalos into the fold. Harry and Giorgio have an in-depth conversation about the existence of aliens, and the former is quite invested in their dialogue. And the fruit bouquet. He leaves the honeydew behind, though. You’re an alien if you enjoy eating honeydew.

What are your favorite Resident Alien moments? Let Your Geek Sideshow and let us know in the comments below!