It’s been over two years since The Magicians ended its five-season run on Syfy, and, folks, I’m still thinking about it. Who would’ve thought that an adult version of Harry Potter would be a profoundly thought-provoking and hilarious study of the human condition and a terrific representation of mental health? Not I!

Since I can’t (won’t) move on with my life, I’ve compiled a list of my favorite spellbinding and shocking moments from this magical show. Read on!

Warning: This article contains a reference in the first section to sexual assault.

Anyone who’s read Lev Grossman’s The Magicians trilogy knows that trickster god Reynard the Fox’s attack on the Free Trader Beowulf group is as brutal as it is gut-wrenching. Seeing it unfold onscreen in the season 1 finale, “Have You Brought Me Little Cakes?,” is significantly worse, and the show pulls no punches in its adaptation of Grossman’s material. Reynard slaughters most of the group, save Kady, who flees, and Julia, who he rapes.

The Magicians takes us to that dark, macabre, gruesome place, and this scene is a pivotal moment in Julia’s overall journey.

Alice’s death after defeating The Beast

Oh, Martin Chatwin. Always wreaking havoc. After solidifying Chatwin, AKA The Beast, as a formidable adversary for Quentin and the Brakebills gang, Alice Quinn steps up to the plate and battles The Beast in “Divine Elimination.” She successfully defeats him but sacrifices herself in the process.

It’s always shocking when a series kills off a main character; however, The Magicians‘ decision to remove Alice early in season 2 is jaw-dropping. Thankfully, Alice returns to the Land of the Living several episodes later since there’s magic. Yay! 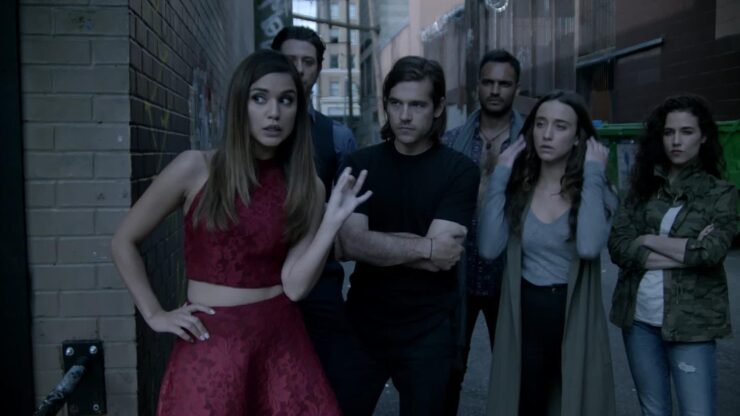 The Magicians never shies away from paying homage to movies, music, and TV, and season 2’s “Plan B” is no exception. Our core crew embarks on an Ocean’s Eleven-esque journey to rob a magical bank. We hardly ever see most of the cast together, so episodes like this make me giddy.

“Plan B” is an excellent outing for Margo Hanson fans as she takes charge of the heist. It’s chock full of delightful magical lore and the strong mythos on which The Magicians thrives. You get a heaping helping of the show’s trademark sardonic wit and zingy one-liners. It’s so damn fun.

Penny in the astral plane

Be the Penny. Arjun Gupta puts a different spin on Penny versus the one we know from the books, but what an exciting spin it is. In “Be the Penny,” a standout episode of season 3, Penny is stuck in the astral plane, trying to communicate with his friends that he’s (technically) alive, just not in his physical body. He watches helplessly while Eliot and his family flee from cannibals, desperately attempting to escape the Neitherlands.

Penny enlists the aid of Hyman Cooper, a fellow Brakebills student also chilling in the astral plane, to learn how to move objects to make his presence known to his pals. It’s a show-best performance from Gupta and equal parts hilariously self-aware and heartfelt.

Eliot and Quentin’s life together

“A Life in the Day” is, hands down, the best episode of The Magicians. Season 3 is all about embarking on a quest, and our crew must find seven golden keys created by Prometheus to restore magic in the universe. Eliot and Quentin find themselves in Fillory in a separate timeline while arranging a mosaic to locate a key. Through that “life in a day,” they fall in love and have a family together.

The cast singing “Under Pressure” 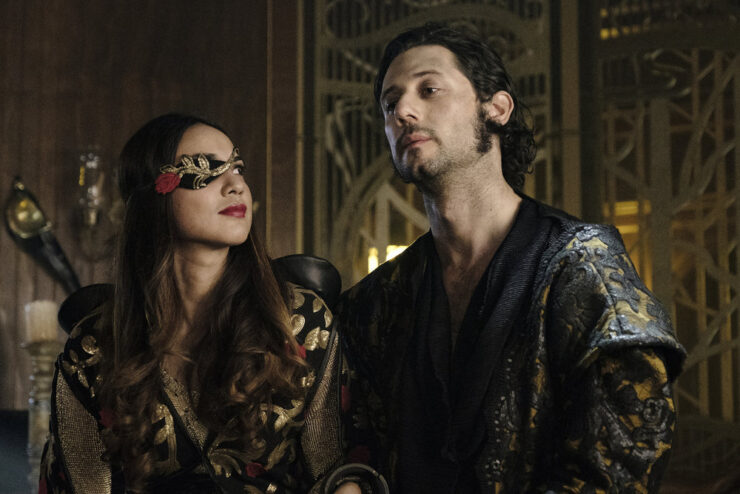 I think season 3 might be my favorite. It boasts some of the best episodes of the series. The Magicians starts its annual tradition of a musical episode in season 2, but season 3 is the strongest, by and large. “All That Josh” weaves a tale that warrants song and dance.

Of course, when you have a show about magic, it’s easy to take the musical route. This series spins the narrative, so it doesn’t feel like the songs drive the story, or they’re doing a musical episode “just because.”

Margo in “All That Hard, Glossy Armor”

Summer Bishil is undoubtedly the most versatile actor out of the cast (with Hale Appleman hot on her heels), doling out top-tier performances. But season 4’s “All That Hard, Glossy Armor” thrusts Bishil’s Margo into the spotlight, and deservedly so.

We see Margo as a hardened, bold figure who masks her pain behind biting one-liners and dry humor for most of the series. Margo’s solo quest of reclamation in the desert, doubling as the season’s musical episode, removes that “hard, glossy armor,” and we glimpse her aching vulnerability. Bishil delivers a raw, visceral, and powerful performance.

The season 4 finale, “No Better to Be Safe Than Sorry,” sees Jason Ralph’s much-contested departure as Quentin. Q’s swan song includes him sacrificing his life to save the world. It’s utterly heartbreaking and a massive punch to the gut. How can the show continue without its lead?

Before Quentin passes on, he watches while his friends mourn him. They throw items bearing personal meaning into a fire while singing a stripped-down version of A-ha’s “Take On Me.” I never thought I’d hear this song as a ballad, but it works. It’s such a poignant, heartstring-tugging scene and a wonderful sendoff for Q.

Even though season 5 feels a bit off kilter without Quentin, there are still plenty of standout moments from which to choose. Thankfully, The Magicians doesn’t lose its signature wit and shine. “Oops!…I Did It Again” is more than just a studio album by Britney Spears; it’s the episode title of The Magicians‘ homage to Groundhog Day.

When the moon is knocked out of orbit and threatens to collide with Earth, our magicians must find a way to thwart the impending apocalypse. Unfortunately, they’re stuck in a time loop, with only Eliot and Margo aware of their situation. Appleman and Bishil are stellar, their electrifying chemistry carrying this wildly imaginative episode. Their nuanced performances coupled with 20 (yes, 20) time loop events keep things fresh, high-octane, and thrilling. 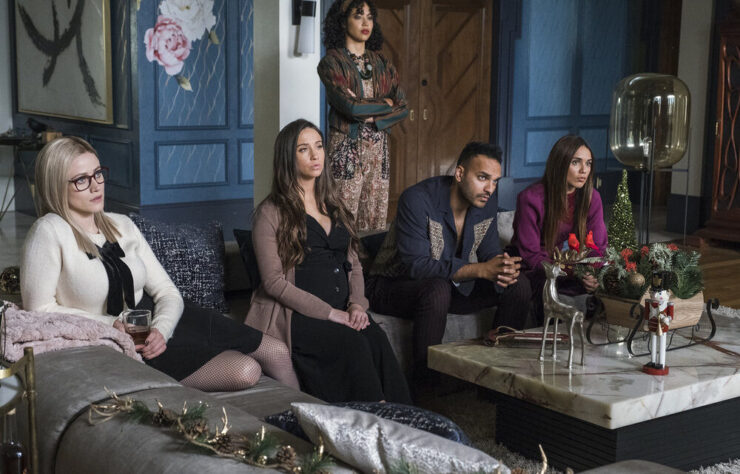 “Fillory and Further,” The Magicians‘ series finale, literally takes us further than Fillory. So much happens, from Margo almost sacrificing herself to save her friends to our heroes creating a new world for Fillorians to inhabit. But Brittany Curran’s performance as Fen significantly elevates this episode. Her heartfelt monologue about taking the best parts of Fillory and Earth to craft a new land and acknowledging that her former home is “backward as sh*t” is deeply profound.

Alice encouraging her friends to accept the bad parts of themselves with the good perfectly encapsulates the crux of The Magicians. Magic comes from pain — it’s derived from heartache and inner turmoil. We as humans should love every aspect of ourselves and acknowledge “the bad” instead of suppressing it.

Ultimately, it’s a hopeful episode, honoring Quentin’s legacy and hatred of endings by leaving things open-ended, as if the next chapter is only a page away. As much as I loathe that we won’t get season 6, this ambiguity serves as a wellspring of imagination for fanfic writers everywhere.

What are your favorite moments from The Magicians? Keep the conversation going over at side.show/geekgroup, and don’t forget to Let Your Geek Sideshow!