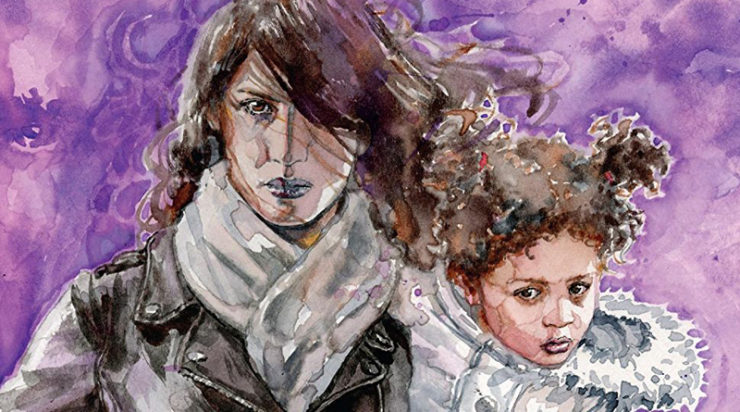 Today, we’re taking a mom-ent to celebrate the Top 10 Moms in Comics. It’s no secret that moms come in all sorts- and they’re not always related by blood. Just in time for Mother’s Day, we’re singling out these hardworking women who prove they can have it all- from raising a family to fighting crime, to fleeing war and fending off zombies. They protect their children and serve as a guiding influence- whether good or bad- for their families.

Read along to find out which superheroes, soldiers, and survivors made our list of lovable ladies with maternal instinct. Let’s get started! 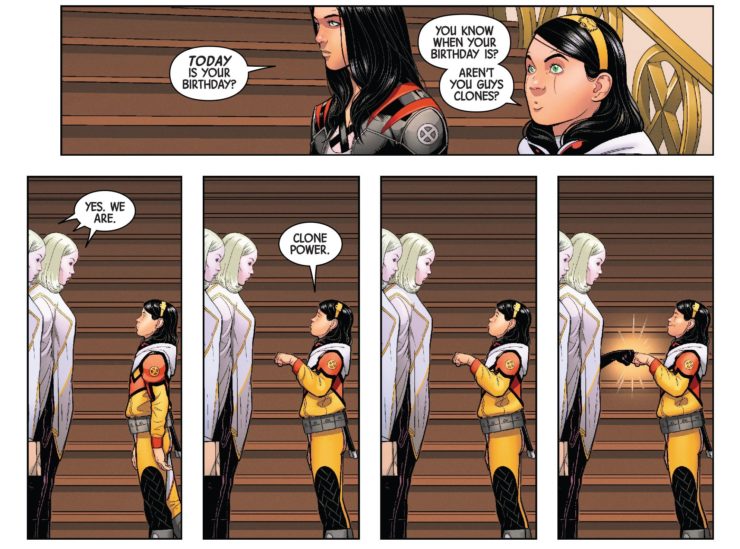 When it comes to Marvel’s mutants, there’s no shortage of clone conspiracies and sagas that keep things interesting.  These clones are created to function as weapons- but who cares for their own clones when the battle is done?

X-23 was once believed to be just a clone of Wolverine, but recently it was revealed that she is the biological daughter of Logan and the scientist Sarah Kinney who carried her to term. That doesn’t mean Laura Kinney’s history with clones stops there- when she took on the mantle of All-New Wolverine, she discovered that a number of clones, called The Sisters, had been made from her own DNA.  The only surviving Sister was Gabby, a young mutant with a single bone claw in each knuckle and the inability to experience pain. Laura has become an adoptive mother to Gabby, also known as the hero Honey Badger, in order to give the little girl a fuller life than that of a clone created to be a weapon.

The Stepford Cuckoos were cloned from a comatose Emma Frost, and they were artificially incubated to become her teenage daughters. Together, the sisters are known as Five-in-One, Emma’s Girls, or Emma Lite by other members of Xavier’s. When Emma Frost taught at Xavier’s, she quickly took the girls under her wing and served as a mentor more than a mother to the powerful telepaths- she actually didn’t know they were her clones at first. The girls abandoned Emma after blaming her for the sister Sophie’s death, but after Esme died, she struck up a secretive relationship with the girls. 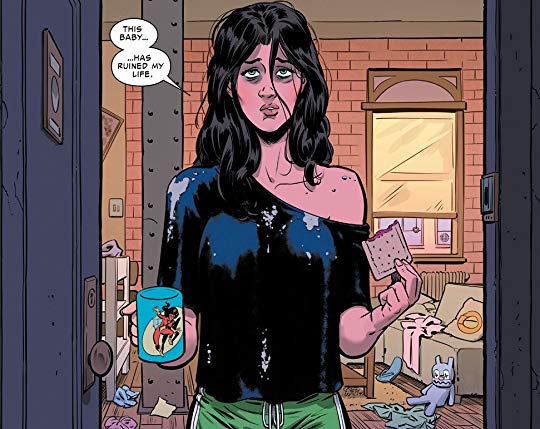 Once famously known for being repulsed by children, Jessica Drew, aka Spider-Woman, has recently become a well-known mother in Marvel Comics.  After the Secret Wars event interrupted the entire Marvel Universe as we knew it, Drew’s story picked up in the second trimester of a pregnancy during which she fought Skrulls in space while preparing to become a superhero single mother.

Fans hotly debated the identity of the baby’s father, until it was revealed that Jessica simply went to a sperm bank after deciding that she wanted to start a family.  She now parents her son Gerry, who inherited her spider-powers (can you imagine a wall-crawling baby?), while maintaining her career as a superhero and an on-and-off private investigator.  During her initial motherhood story arc, she fell in love with the Porcupine, and they now date and raise the child together. 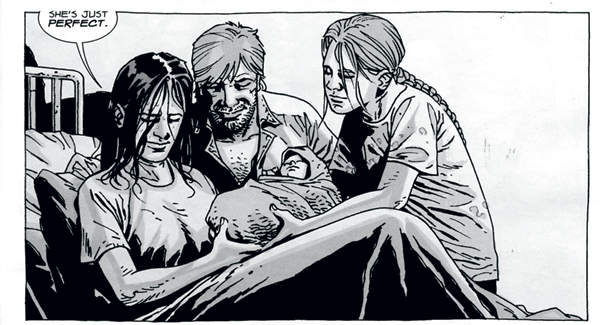 From Robert Kirkman and Tony Moore’s The Walking Dead, Lori Grimes is the mother of Carl and Judith Grimes, wife of Rick Grimes. Being a mother in the zombie apocalypse can’t be easy, and Lori remained extremely protective of her children throughout her time in the series.

Although she wasn’t always faithful to Rick, she balanced survival instinct and maternal instinct to give birth to her daughter and to protect her young son from the dangers of the outside world. She cared for her children up until her unfortunate death when she was shot in the back and collapsed, which also led to the death of her daughter- talk about a smothering mother. 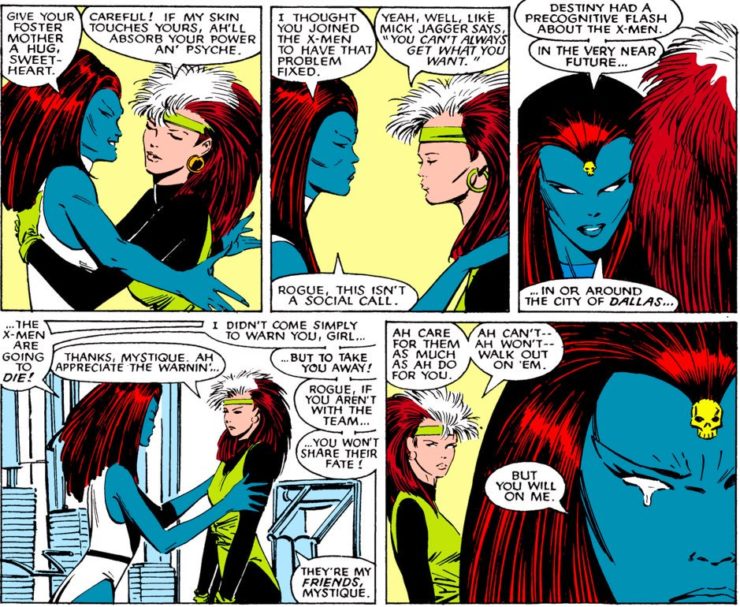 Many mutants have a complicated relationship with their families, and having Mystique as your mother is certainly complication enough. She became the biological mother of Kurt Wagner, Nightcrawler, after an illicit affair with the demonic mutant Azazel. After murdering the father of her husband, she gave birth to Nightcrawler- who had blue skin, yellow eyes, and a pointed tail.  Mystique abandoned him in her escape.

Eventually, she became the adoptive mother of Rogue, who had run away from home in Mississippi. Mystique raised the girl to be assertive and powerful, but often manipulated her daughter into using her powers to fight the Avengers and other X-Men, notably hoping to kill Ms. Marvel. Rogue joined her mother in the Brotherhood of Evil Mutants, but Mystique eventually gave up her guardianship after Rogue joined the X-Men to help heal her fragmented psyche. Mystique was never the most loving mother, but certainly has a protective streak in her. 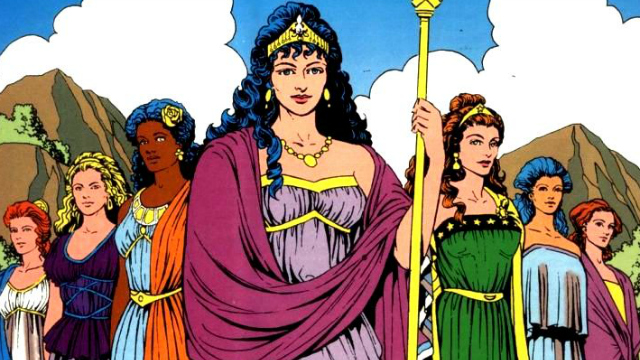 Not only is Hippolyta the Queen of the Amazons, but she is also the mother of Wonder Woman. Strong and graceful, she is a guiding figure to all of the women of Themyscira, but also mothered her daughter Diana, teaching her strength and also performing the motherly duty of being overprotective.

In some versions, she lies to her daughter about her true heritage, depending on which origin of Diana’s birth/creation you are reading. Hippolyta also forbade Wonder Woman from competing in a contest to determine who would go into Man’s World, but eventually supported her choice to be a hero for the outside world. In 2017’s Wonder Woman film, she was played by Connie Nielsen. 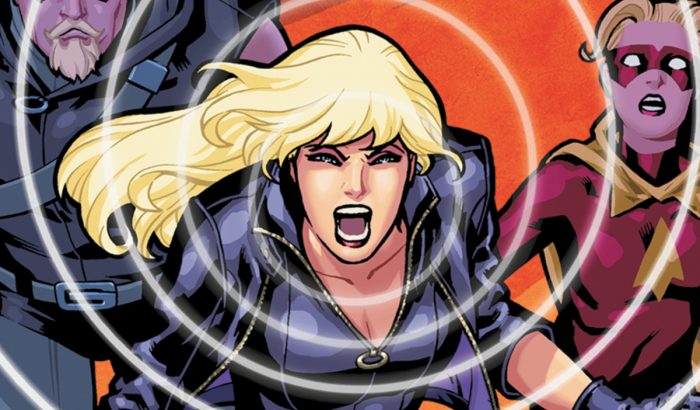 In some iterations of the story, Dinah Laurel Lance is trained by her father, but she inherits the Black Canary name and drive for heroism from her mother.  Her canary cry is a result of a metagene in her DNA that neither parent had, but it’s clear that her abilities and passion are definitely a part of the family legacy. 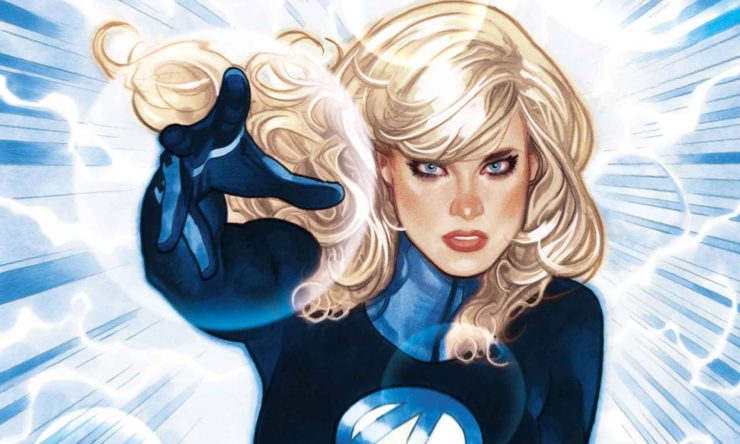 Susan Storm’s mothering tendencies didn’t begin with her children- as a member of Marvel’s First Family, Sue took on a maternal role for her younger brother Johnny Storm when their father went to prison after the death of their mother. As a member of the Fantastic Four, she eventually married Reed Richards and had two children- Franklin and Valeria.

As a mother, Sue dealt with her toddler son manifesting beyond omega-level mutant abilities as a child, and her younger daughter having an extremely complicated origin- involving conception in the Negative Zone, delivery by Doctor Doom, and time travel. Through it all, Sue Storm is a loving, doting mother figure to genius children, while still managing to keep the Fantastic Four mostly together (have we mentioned how much we love Secret Wars?). 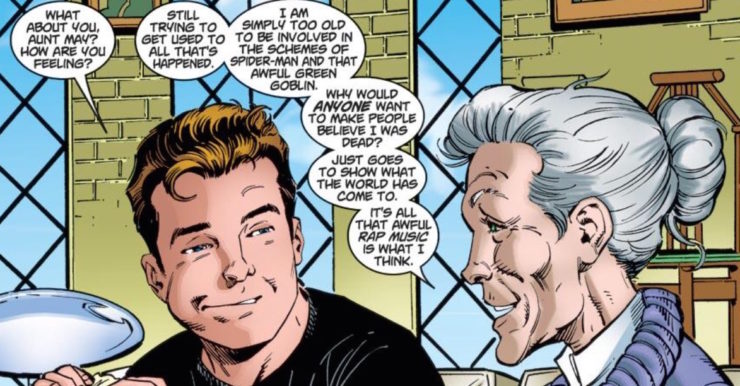 While May Parker, or Aunt May, isn’t Peter Parker’s biological mother, she certainly fits the role of a loving and supportive female role model for Spider-Man.  As his adoptive mother for most of his life, she is an important source of inspiration, affirmation, and of course, wheatcakes whenever Peter Parker is in need of a little boost.

Aunt May has also been an important figure in the maintenance of Parker Industries, a volunteer at the FEAST charity shelter, and has helped at Howard the Duck’s private investigation offices.  She is wise but more importantly kind, using her motherly instincts to help guide more than just Spider-Man himself. 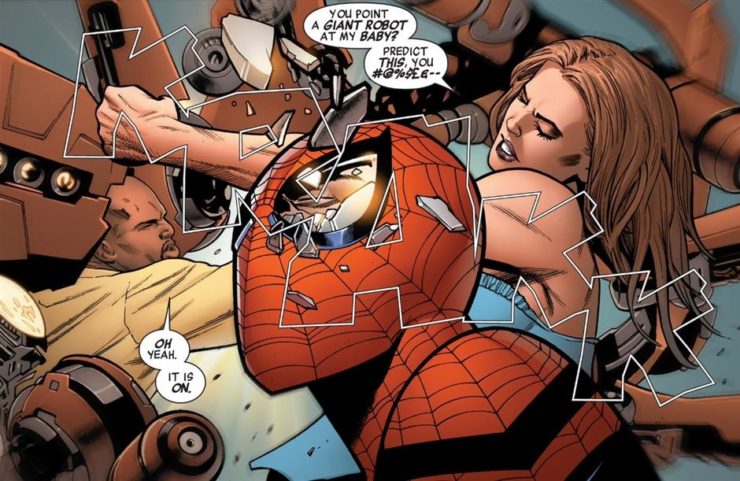 Marvel’s alcoholic private eye isn’t exactly the first person some would consider when listing off the best mothers in comics. However, during her 18-year history in the comics, she’s been a loving parent for the majority of her time in publication alongside Luke Cage. Her daughter Danielle, named after Danny Rand, has been protected by her super-parents from gossip-hounds at the Daily Bugle at birth, Skrull imposters during Secret Invasion, and even Jessica’s own haunted past.

In recent years, Jessica Jones had to fend off the clutches of the Purple Man, who mind-controlled Danielle to get to Jessica on an even more personal level. In “Purple Daughter” by Kelly Thompson and Mattia De Iulis, Jessica even confronted her fears after Dani temporarily turned purple, literally embodying her greatest fears. Jessica’s daughter is her main soft spot, even though she’s turned her back on most of the world.

Learn more about this interesting investigator in the Jessica Jones Then & Now podcast! 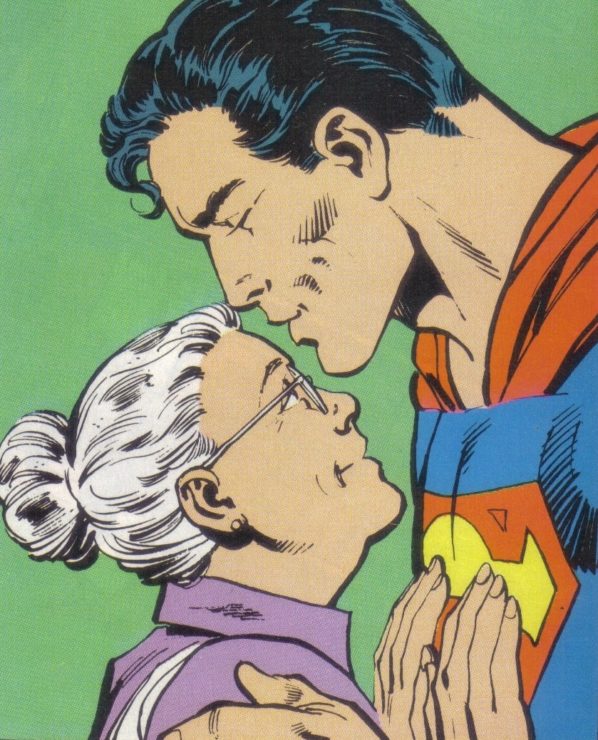 Martha, or “Ma”, Kent is the adoptive mother of Superman.  From the rural town of Smallville, Kansas, she and her husband Jonathan adopted the infant Kal-El after finding his rocket pod after the destruction of Krypton. The baby was renamed Clark Kent, after Martha’s maiden name.  In some continuities, Superman even gets his costume from Martha, owing much of his heroic origin to her.

Martha is the woman who taught Superman patience and compassion, giving him a strong moral compass to allow him to fight for the good of humanity.  She always feels a deep love and parental pride for Clark Kent, encouraging her adopted son to be the best person he could possibly be.  The DC Universe owes Martha a debt of gratitude for being such a loving woman and for helping to turn Superman into one of the universe’s strongest, most compassionate heroes. 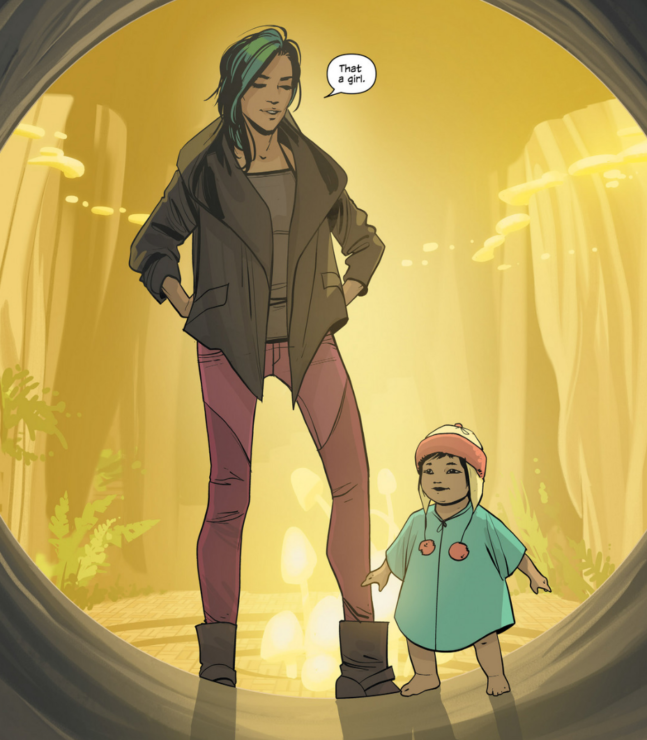 From Brian K. Vaughan and Fiona Staples’ epic space opera Saga, Alana is many things; a runaway soldier, a Landfallian traitor, and perhaps the most devoted mother in the galaxy. What gives Alana the top spot on our list, though, is perhaps the fact that, unlike many of the others on this list, we see her story through the narration of her daughter, Hazel. And we see it all in gritty, gory, and gut-wrenching detail.

With the recklessness to conceive a cross-species daughter in a warzone, and the courage to fight for the survival of her child against bounty hunters, alien monsters, and her old army regiment, Alana’s motherly love and fierce devotion to her family is one of the strongest aspects of Saga, which is 54 issues into its over-100-planned-issue run. She might not always make the right choices, but every choice she makes is for the survival of Hazel, whose narration shows her mother in a very human, very fallible light, but always with the most love.

So, was our countdown just like mom used to make? Or did we make a list only a mother could love? If we missed someone that you think should be on the list, be sure to send us your opinions.