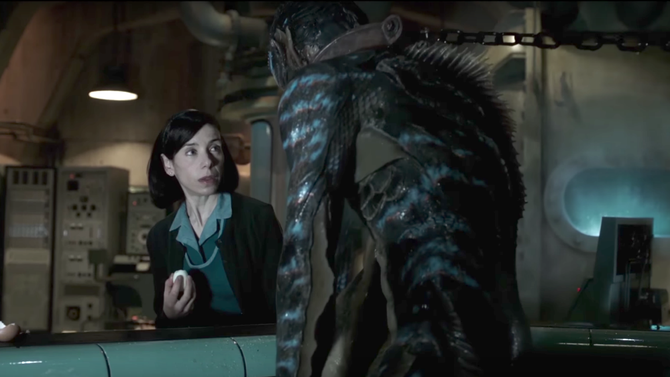 Today, we’re unleashing a beast of a list as we count down the Top 10 Movie Monsters. These iconic staples of cinema have chilled and thrilled audiences for decades thanks to their horrifying designs and effects work that brings some of our deepest fears to life on screen. More than just showing us what it means to be a monster, these creatures more often than not show us what it means to be truly human.

Read along to find out which unforgettable and frightening creatures of cinema have clawed their way to the top of our list. 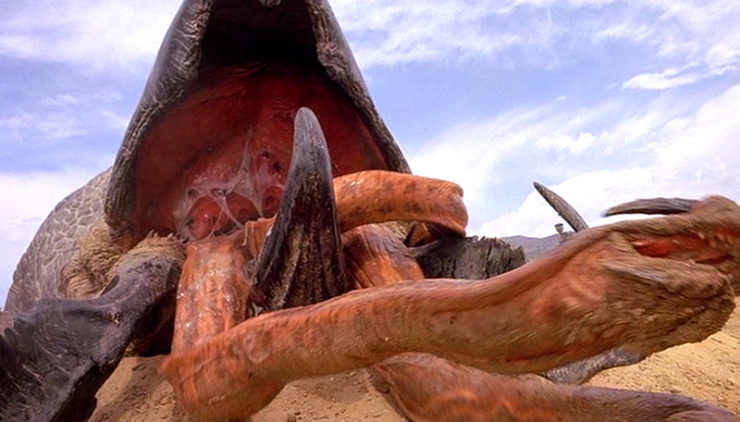 The terror of Tremors, the graboids are fictional sand worms that plagued the town of Perfection, Nevada in the horror comedy Tremors. These aren’t your Dune-style worms either; the subterranean graboids have hooked mandibles and multiple tentacle-tongues beneath their leathery hide. There have been several notable graboids featured in the franchise, named Stumpy, El Blanco, and the Queen Bitch.

They have various stages to their lifecycle, evolving into Shriekers that live above the earth’s surface, and further still into stranger and stranger creatures.  These ambush predators are enigmatic, disgusting, and most importantly, one degree from Kevin Bacon.

Has there ever been quite a terrifying and simultaneously tempting monster like the vampire? Often depicted as supernaturally hypnotic and charming, vampires in general, and most specifically Count Dracula, have sunk their fangs into popular imagination on film.  Bram Stoker’s Dracula (1992) by Francis Ford Coppola featured the famous literary lord of the castle played by actor Gary Oldman.

Vampire lore of many cultures plays into our own perceptions of the vampire figure- they are repulsed by Christian symbols, can transform their appearance to deceive their prey, and are averse to garlic, among other things. The idea of drawing blood from innocents plays into the frightening allure of these monsters, and Dracula is the one vampire villain who casts a large shadow over all the rest. 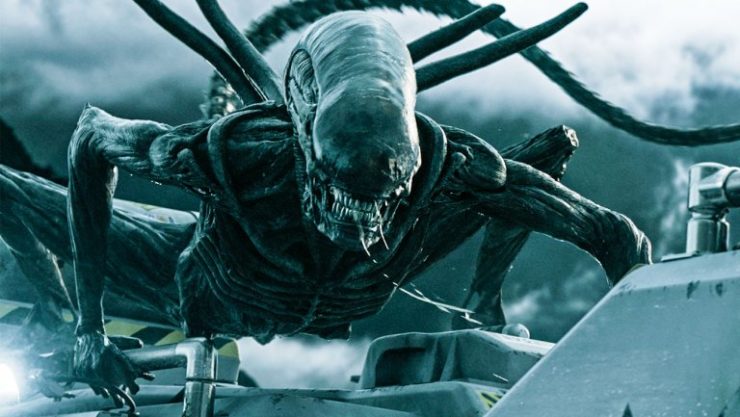 Designed by Swiss surrealist H. R. Giger, the Xenomorph, or Alien, or Internecivus Raptus monster is what keeps us screaming in space even though no one can hear us. This alien monster is an endoparasitic species known for its horrifying facehugging, chestbursting lifecycle that seems to evolve in every installment of the franchise.

The lone, unrelenting Xenomorph of 1979’s Alien was made even more terrifying by its practical effects, constructed and designed by Carlo Rambaldi. Its design evokes primal psychosexual fears, with its horrifying inner jaws, elongated braincase, and gory reproductive cycle that terrifies us to the core.

No name evokes a visceral, monstrous idea quite like Cronenberg. In the 1986 sci-fi body horror film The Fly, we see the life of an eccentric scientist transformed as an experiment gone awry mutates him into a hideous fly-human hybrid. Played by Jeff Goldblum, Seth Brundle is a particularly frightening type of monster- he’s the person we think we know until the moment it’s too late. Becoming the Brundlefly, he becomes paranoid, strong, and strange as his sanity and body begin to deteriorate.

Eventually, audiences are faced with the Brundlefly himself, a hideous hybrid of human and insect that vomits digestive enzymes and is driven by primitive impulses. The Academy Award-winning makeup effects were created and executed by Chris Walas, beginning with the final design step and working backwards from there. Prosthetics, foam latex, distorting contact lenses, and eventually puppet limbs were incorporated to transform Goldblum into a truly horrifying monster.

Who can forget Drew Struzan’s iconic poster for The Thing, the ultimate in alien terror? This parasitic extraterrestrial lifeform is best known for its terrifying capacity of assimilate and imitate other organisms. Rob Bottin was key in the effects creation for this horrifying creature- from the assimilated dogs to the moving blood, to the iconic “chest chomp” scene and viscera explosion that took 10 hours to set the shot- twice.

The various stomach churning appearances of the Thing utilized rubber, foam latex, gelatin, mayonnaise, creamed corn, melted bubblegum, strawberry jam, and even KY jelly to get the perfect consistency of gore, guts, and goop that accompanied every transformation. Though the film was panned by critics and audiences alike, the sheer terror of the Thing has cemented this monster as a cinematic classic in the decades to come.

No, not the band.  The zombies we’re talking about are the shambling, shuffling reanimated corpses of George Romero’s Night of the Living Dead- who are never actually called zombies in the first iteration.  The “Romero” zombie has become one of the defining classifications of these creatures in pop culture, representing an inherent human fear of losing one’s identity and becoming a mindless member of the crowd.

Zombies relentlessly feed on the living tissue of other organisms- not always the brain. It is not a biological hunger, but something more innate. Most zombies have lost all of their original personality at this point, but sometimes they attempt to perform familiar tasks when not agitated. Romero’s zombies established many rules of the genre with regards to the spread of infection, the destruction of the zombie brain, and the speed of reanimation. There have been many takes on these creatures since, but Romero’s remain the gold standard.

Whether or not you think the good doctor is the real monster of the story, no one can deny the iconic legacy of Frankenstein’s creation, based on Mary Shelley’s classic novel- Frankenstein, or The Modern Prometheus. Most people these days just call the monster Frankenstein, and his cinematic legacy has certainly kept animated over decades of remakes, reboots, parodies, and more. He had a bride, he had a son, he had a ghost and met the Wolf Man, and even crossed paths with Abbott and Costello. Originally, actor Bela Lugosi was set to play Frankenstein’s monster, but ultimately was brought to life in black and white by Boris Karloff.

The sympathetic monster was always meant to have a fleshly pallor to him, but due to film values, the actor had to be painted a greenish hue to achieve the best look on film. While colorized promotional images for the films depict him with a more natural skin tone, popular imagination loves the green-tinged Frankie with scars, stitches, and bolts, who has firmly remained one of the most popular Universal monsters to date.

While many films have done their take on the affliction of lycanthropy, An American Werewolf in London remains the paragon of transformation sequences. It was released in the same year as The Howling and Wolfen, but stood apart for its cult classic appeal and critical and commercial success, winning awards for its story and makeup. In the film, two American students are attacked by a werewolf while on a backpacking trip in Europe.

David’s transformation sequence featured in the film, along with the evolution of Jack’s ghostly guise, was a collaboration of filmmaker John Landis and effects legend Rick Baker. The techniques utilized were unparalleled at the time, as viewers watch David’s body wracked with pain as he grows fangs, fur, and wolfish limbs in an agonizing three-minute scene. The sheer imagination and horror of losing yourself to a beast within has cemented this particular werewolf’s spot of honor on our list.

This list wouldn’t be complete without a Guillermo del Toro creature played by the ever-talented Doug Jones. Of all the wonderful creatures that del Toro has brought to the screen, one above all made a monumental splash, securing the Oscar award for Best Picture in 2017, among countless other accolades. The Shape of Water’s “Amphibian Man,” also known as the Asset, brought an even more human side to the dark romantic fantasy of del Toro’s wildest imaginations.

Inspired by the Gill Man from Creature from the Black Lagoon, the Amphibian Man’s look was largely practical effects. The Legacy Effects design team accounted for the foam rubber suit materials soaking up water during certain underwater sequences, as well as maintaining the electronics in the eyes and gills. Despite his similar physical appearance to Abe Sapien from del Toro’s adaptation of Hellboy, the Amphibian Man required an entirely different approach from Jones, who states that he was afraid he’d be unable to pull off the role of “a sexy fish-man with a physical prowess that is beyond human.” For stealing our hearts and showing us the real shape of water, the Amphibian Man takes the #2 spot on our list.

The symbol of a nation devastated by nuclear warfare- Godzilla is truly a monster of our own creation. Originally created as an allegory for the effects of the hydrogen bomb, Godzilla rose up above the rooftops of Japan to bring a reckoning to humanity for utilizing such dangerous and destructive weapons. His name, Gojira, is a portmanteau for gorira, meaning gorilla, and kujira, meaning whale, and his origin generally shows the massive monster emerging from deep beneath the sea, powered by radiation. He is terror incarnate in his earlier appearances, combining monstrous aspects from the iguanodon, tyrannosaurus, alligator, and stegosaurus, along with other unique elements to create the Godzilla we know.

In some incarnations, he fights against humanity, and in others, he fights to save it- he’s been a scourge of humanity and a playful antihero, ever changing across over 30 different film iterations and several anime adaptations. His iconic roar was created by composer Akira Ifukube, when he rubbed a pine-tar-resin-coated glove along the strings of a contrabass and slowed the audio playback. Though he’s rendered in CGI in most new adaptations, the original film’s miniatures and “suitmation” techniques captured the sheer scale of destruction that Godzilla could dish out like no one else could.

If you want to learn more about the iconic gorilla whale, check out Geek Sideshow’s Complete Film History of Godzilla by Geek guest writer Shane Smith.

So, was this list your ideal creature feature? Or did we mash up the wrong monsters? If we missed someone that you think should be on the list, be sure to send us your opinions.