With her own television series, appearances in other series, and showing up in movies throughout her lifetime, Peggy Carter is an integral part of the Marvel Cinematic Universe. Plus, Captain Carter’s shield appears in a poster for Doctor Strange in the Multiverse of Madness — giving fans hope that we haven not seen the last of Peggy Carter.

Courageous, intelligent, and unyielding, Peggy is an inspiration throughout the MCU. In honor of International Women’s Day, here are our top ten Peggy Carter moments across the Multiverse.

10. “Well then I guess we’ll keep cutting them off.” – Peggy Carter 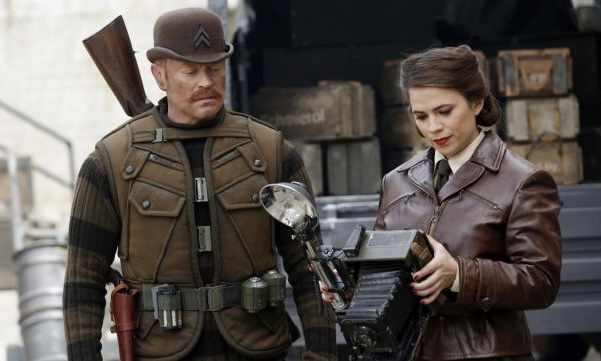 In a flashback on Agents of S.H.I.E.L.D., Peggy confronts a HYDRA agent. As their assets are confiscated, the agent tells Peggy, “Cut off one head, two more will grow in its place.” Not missing a beat, Peggy retorts, “Well then I guess we’ll keep cutting them off.”

No matter what situation Peggy finds herself in, she is persistent and relentless when it comes to doing the right thing. She is also witty, and rarely finds herself without a clever reply at the ready.

9. “Thank you Agent Flynn, but as has always been the case, I don’t require your help.” – Peggy Carter

Peggy is informed that she has been selected to run S.H.I.E.L.D. by Agent Flynn, just moments after he finished berating her for completing a recent mission on her own. He offers to help Peggy carry her things out, but she tells him with this line that she does not need help. Peggy always manages to get the job done, and recognizes that she is capable of doing it on her own. She is also incredibly proud and does not suffer fools.

Peggy reunites with the Flying Commandos for a mission, taking on the role of leader herself. Dum Dum Dugan and Peggy are pinned down by enemy fire and argue about which one of them will make their escape first. Dum Dum asks Peggy what Cap would say if he left his best girl behind, and Peggy tells him, “He would say, ‘Do as Peggy says!’”

Although Dum Dum’s question came from a place of respect for both Steve Rogers and Peggy, Peggy knows that she is a skilled soldier and leader in her own regard. She is entirely capable of making judgment calls and handling challenges herself and doesn’t hesitate to remind Dum Dum of this fact.

7. “Your desire to help others is noble, but I doubt you’ll find much success unless you allow others to help you.” – Edwin Jarvis

One of Peggy’s most admirable traits is her ability to rely on herself. Having spent years trying to prove that she is just as capable as the men she works with, she grew accustomed to doing things on her own. After a mission nearly goes awry, Edwin Jarvis, trusted butler of the Stark family, stitches up Peggy’s wounds. He points out how fortunate she was that he ignored her directives to let her handle things on her own.

Jarvis tells Peggy that although her desire to keep others safe by doing things solo is admirable, no single person is capable of doing everything without support. Although she is dismissive and indignant in the moment, Peggy heeds Jarvis’s advice. On future missions, she accepts his help. One of Peggy’s best traits is her ability to learn and grow as a person, and this moment is a clear example.

6. The Fight Against Ultron 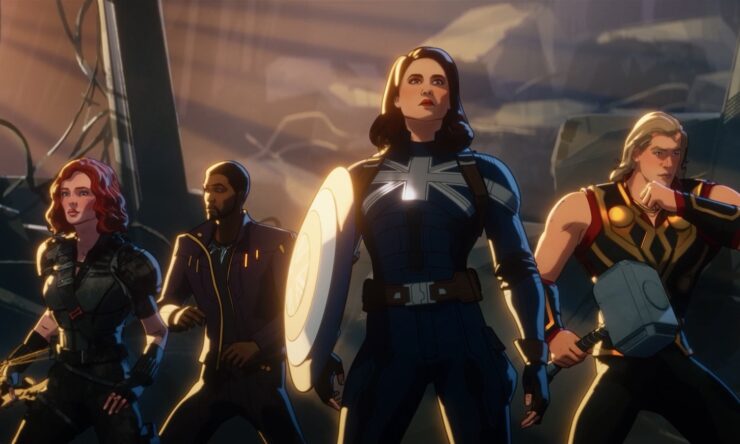 Summoned by The Watcher, Captain Carter works with heroes from multiple universes to save the Multiverse itself when Ultron plans to destroy everything. Even in an entirely different universe, she once again proves herself to be both a capable tactician and quick-thinking soldier. Her teamwork and leadership skills help save the Multiverse.

And yet, despite her wish to find Steve again in the Multiverse, she is ever the dutiful soldier. She returns to her own timeline, where the Watcher assures her that she is needed. 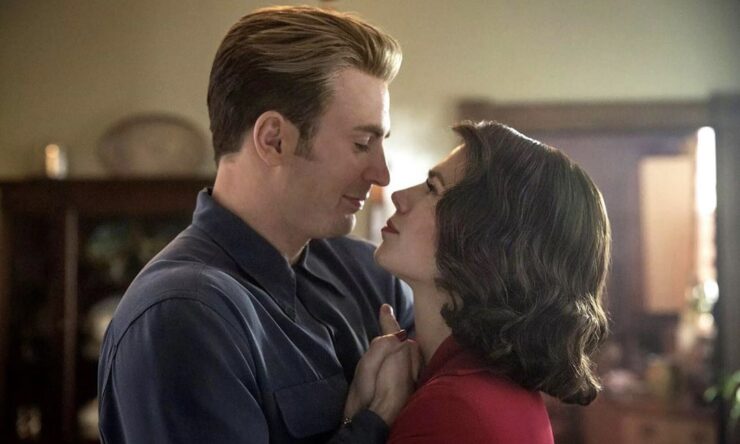 Although Peggy built a meaningful life for herself as the head of the Strategic Scientific Reserve, it is clear that she never forgot about Steve. Throughout all of her endeavors, he still held an important place in her heart. Then, the closing scene of Avengers: Endgame reveals that Steve Rogers returned to Peggy for the dance that he had promised her after all.

Between this moment and photos shown in Captain America: The Winter Soldier, which revealing that Peggy had two children, Peggy shows that she can strike a perfect balance between a fulfilling private life and her role as a founder of S.H.I.E.L.D. 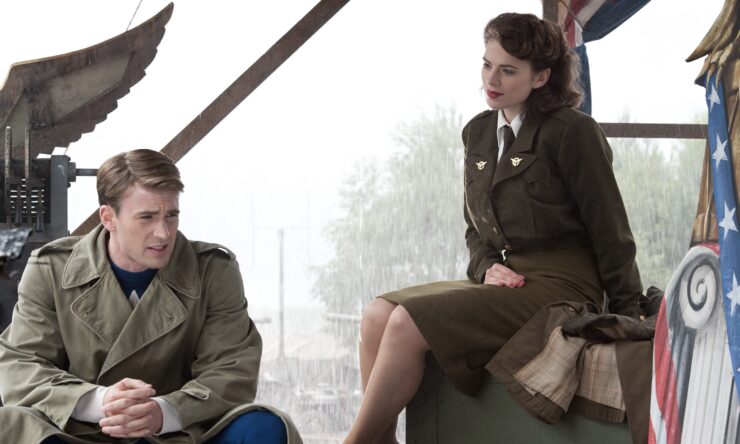 Steve sits alone following an ill-received performance as Captain America. Peggy finds him sketching himself as a monkey on a unicycle. As Steve feels sorry for himself and tries to justify the role he has been given, Peggy tells him, “You were made for more than this, you know.”

Peggy has a discerning eye for who people really are — despite what anyone else might think. She sees who people are at their core, and does whatever she can to support them, even if it means going against direct orders.

Colonel Phillips and Doctor Erskine debate which soldier should receive the serum. Erskine insists that the soldier’s heart matters much more than his physical prowess. To test which soldier has the temperament necessary to receive the serum, Phillips tosses a dummy grenade. While Steve throwing himself on the grenade is the focus of this scene, Peggy also runs toward the grenade as the other soldiers flee. Peggy is willing to do the right thing for the greater good, no matter the cost to herself — proving she was always worthy of the title.

2. The Origin of Captain Carter

Marvel’s What If…? episode 1, “What If… Captain Carter Were the First Avenger?”

As Steve prepares to receive the serum, Peggy Carter makes a different choice in this universe: She chooses to stay where the infusion is taking place instead of joining the others in the gallery. When Steve is wounded and time is running out, Peggy makes the quick decision to be on the receiving end of the experimental treatment and becomes Captain Carter. With a good heart and unshakeable tenacity, Peggy helps save her universe from a terrible fate at the hands of Red Skull. Once again demonstrating her selflessness, Peggy sacrifices herself to save the day. 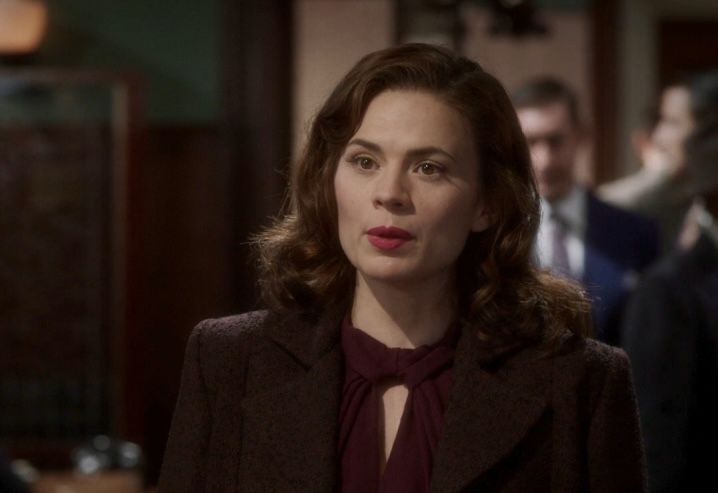 While serving in World War II and in the Strategic Scientific Reserve, Peggy spent much of her time trying to prove that she could hold her own as the only woman in her position. At the end of the first season, Agent Thompson accepts all of the accolades for what was ultimately Peggy’s work. Agent Sousa gets incensed at the injustice of Peggy going unrecognized. Peggy assures him that she is unfazed. She tells him that she doesn’t need anyone’s approval, saying, “I know my value. Anyone else’s opinion doesn’t really matter.”

Once again demonstrating her admirable ability to evolve as a person, Peggy realizes that the acceptance and praise she sought so eagerly from her fellow agents was actually not worth it. She realizes that the faith she has in her abilities and her own awareness of her worth are more than enough for her. As a woman who had previously been defined by the men around her, she finally created her own space in the world.

Throughout her lifetime and across the Multiverse, Peggy Carter is a hero who inspires the people around her, as well as audiences watching. Her commitment to do the right thing at whatever cost cements her as one of the most admirable characters in the MCU.

What’s your top Peggy Carter moment? Let us know in the comments and don’t forget to Let Your Geek Sideshow!