Do you recall a much simpler era when none of us had time (or the mental wherewithal) to start watching a new TV series? Those were the days! Now, those of us in isolation are faced with another conundrum – too much time on our hands. Thankfully, I’m here with a solution!

Lately, I’ve been really invested in period pieces. It’s a genre I’ve always enjoyed, but it isn’t my go-to on a normal basis. Perhaps the need to escape is the culprit? Regardless, there’s something about living vicariously through another time period that gets the mental juices flowing.

I find period pieces to be engaging and enthralling. Below, I’ve compiled a list of my favorite 10 TV period pieces that you can watch right away. Add them to your binge list, folks. Peruse at your peril!

Do you love 18th century prostitutes just trying to get by in foggy London town? Follow-up question: do you have an affinity for dueling bawdy houses, salacious pub gossip, and unhygienic self-care routines with a Georgian period backdrop? Then Harlots is the show for you!

It stars Samantha Morton, Lesley Manville, and Jessica Brown Findlay.Morton and Manville play mortal archenemies who both run successful brothels. It’s gritty and deliciously devious. I’d call it my guilty pleasure show, but the writing is quite clever and the performances are top-notch. Not to mention, Harlots has some of my favorite costumes ever. So beautifully and intricately crafted!

Now, let’s backtrack a few decades, to early 18th century Nassau. The Golden Age of Piracy is flourishing, despite the UK’s incessant attempts to quell it. Black Sails is produced by Michael Bay and ran for four years on Starz. Half of the characters existed as real-life pirates, while the remainder hailed from Robert Louis Stevenson’s Treasure Island. The imagery is stunning, and that’s all thanks to Bay’s bottomless wealth.

Toby Stephens leads the charge as Captain Flint, a morally bankrupt man with nothing to lose. Flint reminds me of a Shakespearean foe, which matches perfectly with the show’s Shakespearean dialogue. Stephens gives off a truly award-worthy performance. Black Sails sailed largely under the radar during its tenure, which still irks me to this day.

Peaky Blinders is one of the few shows to incorporate contemporary music with its antiquated background and successfully pull it off. Even though the show takes place in the 1920s, it doesn’t seem anachronistic when a song from Royal Blood starts playing. Peaky Blinders, starring Cillian Murphy, is a whirlwind of backstabbing, betrayal, thick accents, and steamy scenery.

Despite the main characters living corrupted lives as essentially criminals, you still root for them. You want them to win. Peaky Blinders is mesmerizing, and you’ll find yourself incapable of turning a blind eye once you start watching it.

Simply marvelous! If you haven’t heard of The Marvelous Mrs. Maisel, then you might live under a rock. Amazon Prime’s star series has snagged awards left and right. For good reasons, of course.

Rachel Brosnahan stars as Midge Maisel, a 1950s housewife whose husband leaves her for his secretary. Then, she decides to pursue a career as a stand-up comic which, in 1958, is unheard of. You mean to tell me that women can be funny (I can make this joke because I’m a woman)?

The Marvelous Mrs. Maisel boasts a stellar cast, a wonderful soundtrack, vivid costumes, and clever, snappy dialogue. This is an Amy Sherman-Palladino property, so witty fast-paced dialogue is just par for the course.

Now, I stumbled upon Turn while on the hunt for a new Netflix series to binge watch. I’m an avid fan of history, which means a show about George Washington’s spies during the Revolutionary War is right up my alley. Starring Jamie Bell, the series follows a man who’s enlisted into Washington’s spy ring.

This series is based off a book documenting the real-life Culper Spy Ring and by golly, it’s fascinating. When I use the phrase “by golly,” then you know I mean business. Turn keeps you on the edge of your seat, and the political intrigue will get you hook, line and sinker. 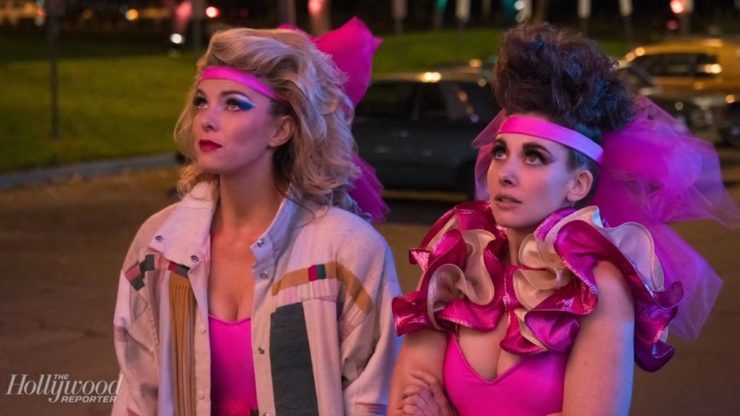 A show about the Gorgeous Ladies of Wrestling set in the ’80s? Count me in! GLOW is about to air its fourth and final season on Netflix. It stars Alison Brie, Betty Gilpin, and Marc Maron. It’s darkly funny and chock-full of whimsy. I love me some good ol’ fashioned whimsy.

Not to mention, GLOW has a killer ’80s soundtrack. The story is one of acceptance in all aspects and that women can conquer the world, even beyond the wrestling ring.

I don’t know about you, but I’m a sucker for British dramas – especially dramas pertaining to the British monarchy. The Crown is about Queen Elizabeth II and has a rotating cast so you can watch Her Majesty age in “real time,” so to speak.

Claire Foy and Matt Smith were extraordinary in the first two seasons, and both nailed the Queen and Prince Phillip’s mannerisms. I had no idea royal life was so fraught with salacious intrigue and scandal, but it sure makes for interesting television.

The Man in the High Castle

What if the Allies lost World War II? The Man in the High Castle delves into that very question. The series was adapted for Amazon Prime from Philip K. Dick’s novel of the same name. We see an alternate history play out before our eyes – the United States is divided into different sectors.

In the east there’s the Reich, lorded over by Germany, naturally. In the west there’s the Pacific States, overseen by Japan. There’s a small section in the middle of the country crowned the Neutral Zone. The militaristic ruling in this alternate history (the show takes place in the 1960s) doesn’t feel far off from our current predicament.

The Man in the High Castle is complex and intriguing, with a wonderful (and terrifying) performance from Rufus Sewell.

Who doesn’t love watching Ian McShane sauntering through an Old West saloon and shouting expletives every few minutes? It pains me to admit that I only recently hopped aboard the Deadwood train. However, I’m glad I did.

McShane is mind-blowing in this show, and every acting class should be studying his performances. Not to mention, the Old West charm, the gritty imagery and incessant gun-slinging is enough to keep anyone entertained. Well, at least for an hour.

When Showtime cancelled Penny Dreadful back in 2016, I was heartbroken. This show was the perfect mix of horror and drama, complete with a compelling performance from Eva Green. Green was utterly dazzling and downright visceral. Raw. Brutal. I was simultaneously afraid of her and captivated by her.

Penny Dreadful took place in Victorian London, where vampires and werewolves roamed the streets. The show even brought in Dorian Gray, Dr. Jekyll (who morphed into Mr. Hyde from time to time), and Dr. Frankenstein. It’s every horror lover’s dream.

Well, that’s all I wrote! What TV period pieces are you watching right now? Sound off in the comments and don’t forget to Let Your Geek Sideshow!

The Batman Update, New Photos from Dune, and more!

Superman & Lois Casts Their Villain, The Sandman Casting, and more!