Rick and Morty has become a bona fide staple of adult animation since its debut in 2013. Everyone loves a good adventure featuring an inebriated genius scientist and his anxious grandson.

The beautiful thing about a cartoon that embraces science fiction is that countless themes and stories can be explored. No holds barred! Who needs live-action, anyway? This show is equal parts touching and hilarious… but mostly hilarious. Not to mention, it can get macabre and philosophical. Rick and Morty is a series capable of keeping several balls in the air.

There are episodes aplenty that “get schwifty” in my eyes. Below, I’ve got a list of my top 10 episodes of Rick and Morty by order of season. Time to obsess over Rick Sanchez, America’s Sweetheart! Well, perhaps not as much as he obsessed over McDonald’s Szechuan sauce.

I’m Mr. Meeseeks, look at me! I liked Rick and Morty from the get-go, but this episode solidified my love for the series. Rick bestows his family with a Meeseeks Box, which contains creatures called “Mr. Meeseeks.” Said creatures exist to cater to your every whim. They won’t go away until your problem is solved. Jerry is trying to improve his golf game, but even several Mr. Meeseeks are incapable of fixing Jerry’s swing.

Morty takes the reins and leads Rick on an adventure for once, which results in landing in Giant’s Court and an unfortunate encounter with Mr. Jellybean, among other things. “Meeseeks and Destroy” is a fun outing that plays with the dynamics between our core characters, namely Rick/Morty and Jerry/Beth.

Rick installs cable that receives programs from other dimensions (this is the precursor to “Interdimensional Cable 2: Tempting Fate”). They channel surf through some pretty strange shows, including a Showtime series wherein people evolve from corn. Then, the family spots Jerry on David Letterman’s talk show. Apparently, he’s a famous movie star in an alternate reality.

Rick gives his kin a pair of Inter-Dimensional Goggles so they can see how their other selves live. Jerry’s life devolves into a sad affair of drugs and booze. Beth is operating on people instead of horses. Eventually, the experience brings Jerry and Beth closer together. It’s an interesting take on what happens when we roll the dice in life, and how our choices have a ripple effect. 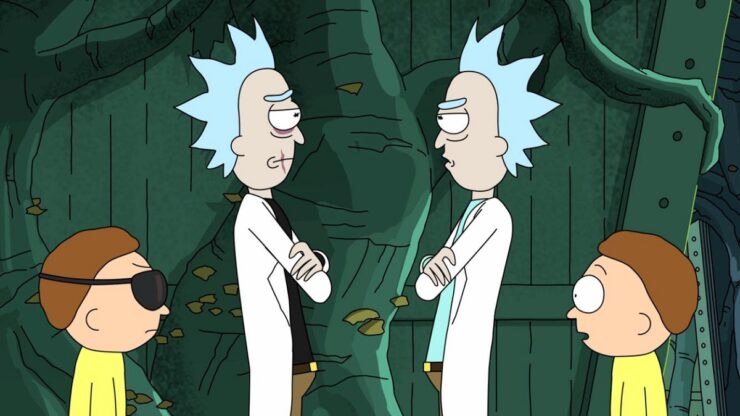 Rick is enjoying breakfast when he’s kidnapped by a group of Ricks and deposited at the Citadel. He’s on trial courtesy of the Council of Ricks for crimes against, well, Ricks. You get the picture. Our Rick manages to escape and sends the other Ricks on a wild goose chase through multiple dimensions. The Smith residence is crawling with Ricks. Jerry even bonds with one of them who’s vastly different from the Rick we know.

Basically, there are so many Ricks and Mortys. So many. “Close Rick-counters of the Rick Kind” marks the introduction of the Citadel and the escapades therein. Evil Morty also makes his appearance. This episode is a delightful caper that blends in humor and thrills. A twofer!

Is Mr. Poopybutthole real? What about Reverse Giraffe? Mr. Beauregard? “Total Rickall” finds the family dealing with a crafty parasite that implants false memories. We see a bevy of new and peculiar characters pop up as Rick and co. fondly recall past events and adventures. Then, the group bands together and kills every last one of them.

If a strange being was involved in a “happy” memory, then they were on the chopping block. “Total Rickall” is a testament to the imagination of the Rick and Morty Powers That Be. Just how many zany creatures can they conjure? The answer is all of them. All of the zany characters.

I like what you’ve got! “Get Schwifty” throws our planet into an intergalactic song competition, wherein giant alien heads called Cromulons oversee the proceedings. If you don’t win, you die. Representatives of each world put forth their best musical work in the hopes of snagging the crown. And not blowing up. That part’s very important.

Rick and Morty decide to be Earth’s resident melodic geniuses with a track called “Get Schwifty.” They ask Ice-T for assistance. Thankfully, the Cromulons deem them winners of Planet Music. This episode is silliness personified and laden with plenty of laughs. You gotta get schwifty in here. 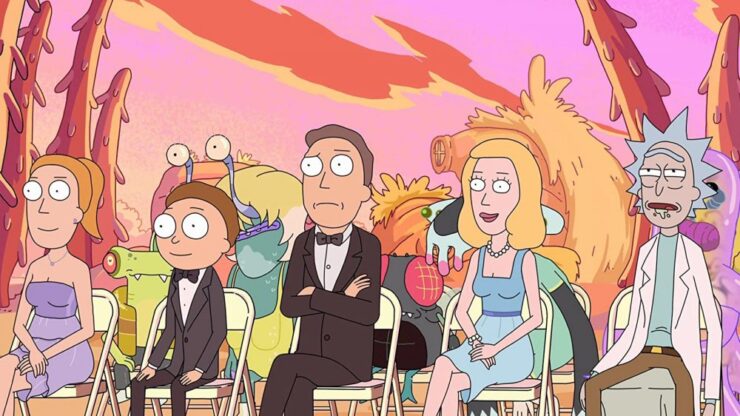 It’s wedding bells for Birdperson and Tammy! The Smith family heads to Planet Squanch to attend the ceremony of the galaxy. Rick is reticent to attend, citing that weddings are “funerals with cake.” But after some convincing, Rick delivers a moving speech to the newlyweds.

However, the monologue ends with Tammy’s real identity cropping up as a Galactic Federation agent. She reveals that officers have surrounded the building. Betrayal! Rick and the clan narrowly escape a blood bath. They hide out on an Earth-like planet, since going home is no longer an option. The Federation will be hunting for him.

Inevitably, the family tires of being on the run and heads back to Earth, which is now under the Federation’s rule. Rick is arrested and imprisoned. It’s a surprisingly sad moment for the show. Not to mention, Nine Inch Nail’s “Hurt” compliments the final scene with Rick’s capture. Again, an unexpectedly depressing ending for an animated comedy.

“Nine more seasons until I get that dipping Szechuan sauce. What is that? For 97 more years, Morty!” Rick’s rant about Szechuan sauce in “The Rickshank Rickdemption” never fails to make me laugh. Despite his “series arc” only revolving around obtaining the “Mulan McNugget sauce,” this episode features Morty and Summer trying to track down their grandpa.

Rick is still imprisoned by the Galactic Federation. An agent is interrogating Rick through his memories. He threatens that, should Rick refuse to cooperate, his brain will be liquified. Rick loves his brain more than anything. While Rick’s rant is my highlight for this outing, the entire episode is classic Rick and Morty. Interstellar shenanigans, y’all!

This episode is also known as “Tales From the Citadel,” in case you’re confused by the above title. Rick and Morty are about to embark on a spectacular trip to Atlantis when they encounter another Rick and Morty from the Citadel. Apparently, the Citadel is back up and running after our Rick decimated it.

Then, we see a fully functional Citadel along with a peek behind the curtain at other Ricks and Mortys at work. There are mafia dealings, murder, political schemes, and intrigue. The promise of a better tomorrow for the Citadel concealing an undercurrent of lies. It’s deep. Dark. And most certainly dangerous. Additionally, it’s nice to catch up with other Ricks and Mortys from different dimensions. 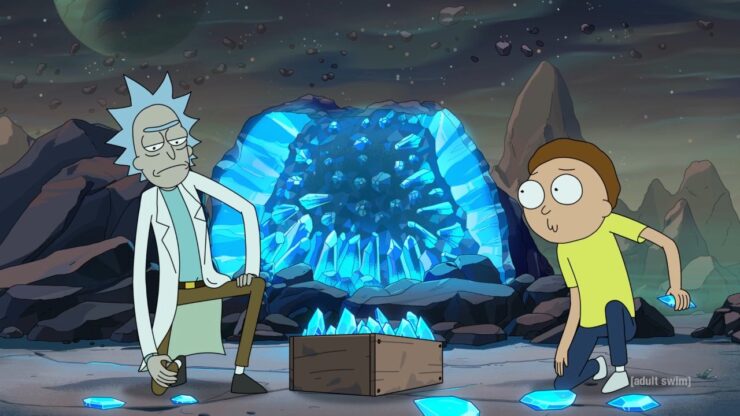 Rick and Morty get their hands on death crystals from Forbodulon Prime. Said death crystals allow the holder to see all the ways they could potentially die. Morty swipes one and chaos ensues. He peers into an alternate reality where he’s married to Jessica. Morty is determined to make this vision come to fruition.

Rick is killed during all this and a hologram of him appears to Morty explaining how to bring the former back to life. However, Morty ignores it. In the end, Rick returns and Morty learns a valuable lesson. Take what life gives you. Make your own choices. Predicting the future is a waste of time when life itself is unpredictable.

This episode features Morty trying to live a life sans consequences. He asks Rick to construct a “save game” function, a device that allows you to skip to certain points in time. You can gloss over embarrassing events, redo certain moments, etc. Morty has fun experiencing life without repercussions. Well, until he doesn’t.

Rick reassures Morty that if anything goes wrong to jump inside the same vat of acid that he does. It’s a stark reminder that life is meant to be lived in its entirety — glaring warts and all. Plus, you know, vat of acid.

What is your favorite episode of Rick and Morty? Any you think we missed? Let Your Geek Sideshow and tell us in the comments!