Since her introduction in Avengers: Age of Ultron, Wanda Maximoff has been a force to be reckoned with. With the ability to wield chaos magic, Wanda’s telepathic and telekinetic abilities are a boon to those that fight beside her and a peril to those that stand in her way.

As she harnesses the extent of her magical prowess in her time in the Marvel Cinematic Universe, it quickly becomes clear why she is often regarded as one of the strongest Avengers. And in light of Doctor Strange in the Multiverse of Madness, we can expect to see more reality-bending displays of power as well as instances of genuine grief and love. Here are our top 10 Scarlet Witch moments! 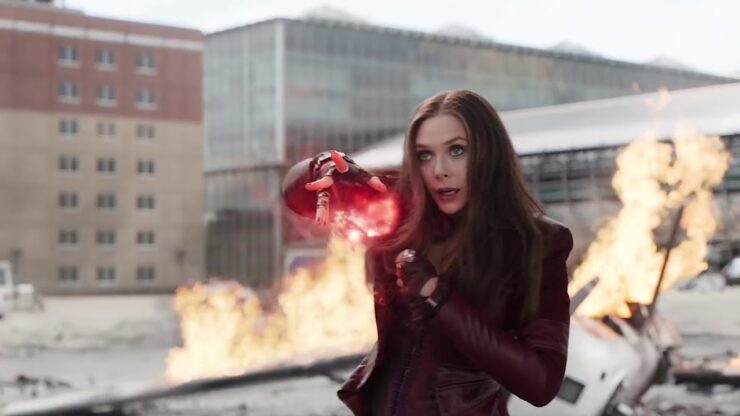 After she realizes that Tony Stark effectively put her on house arrest following the events in Lagos, Wanda reconsiders her loyalty in the Civil War between the Avengers, ultimately lending her strength to Captain America. She uses her formidable abilities to rain cars down on Iron Man’s head, and levitates an entire tower to allow Steve and Bucky to make their escape. Even when she is clearly pulling her punches to avoid causing any significant casualties, Wanda is an asset to the team.

It’s Halloween in Westview, and Wanda is enjoying spending the holiday with her brother Pietro and her two sons, Tommy and Billy. Billy’s abilities manifest, and he is suddenly aware of Vision dying as he tries to leave the borders of the hex. Billy races to Wanda’s side and tells her that he thinks his dad is dying.

Although the creation of the hex may have initially been a subconscious manifestation of her powers, Wanda is now aware of what she has created. She willfully extends the borders of hex, ultimately saving Vision. In this moment, she demonstrates how much her powers have grown and how singular her focus is when protecting her loved ones.

Wanda exits the borders of the hex, dragging behind her the remains of the missile-launching drone sent by Director Hayward of S.W.O.R.D. Hayward defends his actions as Wanda tells him to stay out of her home. With more than a dozen guns aimed at her, Wanda does not flinch.

When Monica Rambeau asks her what she wants, Wanda tells her, “I have what I want, and no one will ever take it from me again.” As a final warning and reminder of who is really in control of the entire situation, she takes over the minds of the soldiers present, forcing them to redirect their weapons at Director Hayward. 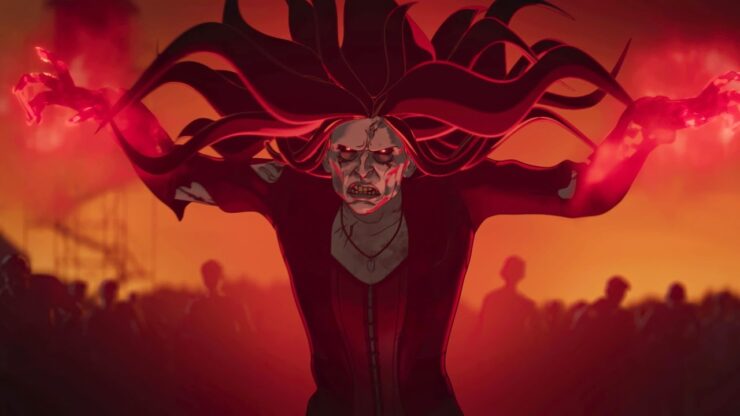 In its exploration of the Multiverse, What If…? takes viewers to a universe where the majority of the Avengers have become zombies. The remaining heroes follow a beacon and find Vision supposedly working on a cure for the virus. They learn, however, that he has also been using the living people he finds to satiate the hunger of a zombified Wanda.

This Zombie Wanda manages to escape her prison and even in her undead form proves to be a daunting opponent. She manages to take out Kurt and Okoye, and even holds her own against the Hulk. Her already indomitable strength is somehow made even more terrifying as she wields it to feed her insatiable zombie appetite.

6. Mind Games with the Avengers

The audience is introduced to Scarlet Witch’s telepathic powers for the first time in Age of Ultron when she takes over the minds of the Avengers. Tapping into their fears and pain, she creates unique visions that incapacitate and overwhelm Black Widow, Thor, and Captain America.

Natasha sees her time in the Red Room, Thor witnesses the final days of Asgard, and Steve sees glimpses of himself dancing with Peggy Carter. Wanda completes the final part of the plan when she sends Bruce Banner’s Hulk into a destructive rage. Even though her powers are new to her, she can subdue Earth’s Mightiest Heroes with relative ease.

Wanda watches as the Avengers and Wakandan soldiers are overwhelmed by Thanos’ forces. Leaving her vigil at Vision’s side, Wanda leaps onto the battlefield and effortlessly destroys the massive alien weaponry rolling across the plains. She saves Okoye and Natasha in the process. Unfortunately, her absence at Vision’s side gives Corvus Glaive an opening to attack Vision and interrupt Shuri as she attempts to remove the Mind Stone from the synthezoid.

This leaves Vision vulnerable as Thanos arrives, forcing Wanda to destroy the Mind Stone and kill Vision in the process. Her strength allows her to both hold off the Mad Titan armed with five Infinity Stones and destroy the Mind Stone — all while grappling with the loss of her true love by her own hand. Unfortunately, Thanos uses the Time Stone to bring Vision back long enough to take the Mind Stone and Snap half the universe, including Wanda, out of existence.

The Avengers, along with Wanda and Pietro, evacuate the citizens of Sokovia and try to destroy every last one of Ultron’s sentinels. When Pietro gives his life to save Hawkeye, Wanda is immediately aware of the death of her twin. She finds Ultron Prime as he lays dying amid the wreckage of the city. He warns her that if she stays behind, she’ll die.

She replies, “I just did. Do you know how it felt?” Using her powers to rip out his metal heart, she says, “It felt like that.” In the final battle against Ultron, Wanda demonstrated her ability to work alongside teammates while also fighting through unimaginable pain.

Although her powers alone are enough to make her a worthy contender for the title of strongest Avenger, Wanda’s resilience as she endures loss is also noteworthy. In the penultimate episode of WandaVision, Agatha Harkness takes Wanda on a tour of her previously unseen childhood trauma. Their journey also touches on losses Wanda faced at other points in the MCU.

Between the loss of her parents, Pietro’s death, Vision’s demise, and disappearing in the Blip herself, Wanda has had to navigate devastating loss. As the series draws to a close, she has to lose her children and Vision all over again. She admittedly stumbles and makes grave mistakes as she works through her trauma, but she always finds a way to turn her loss and grief into strength, and as Vision so eloquently put it, “love, persevering.” 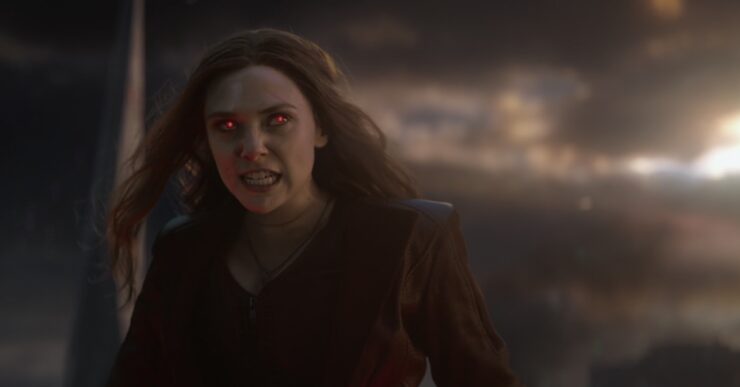 When Hulk successfully brings those lost in the Blip back at the climax of Endgame, Wanda has the opportunity to face Thanos once again. Eyes glowing red, she lands in front of Thanos and tells him, “You took everything from me.” He tells her he does not know who she is, and with certainty she replies, “You will.”

Summoning everything she has in her, she does what the other Avengers could not during the battle and nearly kills Thanos. As she peels his armor off, Thanos instructs Corvus Glaive to “Rain fire,” knowing full well that it will kill his troops as well. This order is a desperate last attempt at winning. Without the Infinity Stones, The Mad Titan realizes that against Wanda, he is unmatched.

Agatha Harkness tries to make a deal with Wanda: If Wanda relinquishes her powers, Agatha will make it so Wanda and her family can live in Westview in peace. Wanda seems to agree, firing bursts of her magic at Agatha and the walls of the hex around them. With every shot, Wanda grows weaker.

However, as Agatha tries to wield Wanda’s magic, she finds that she cannot. Wanda reveals that she learned a valuable lesson from Agatha and had cast runes around the hex; within that space, only Wanda can wield magic. Wanda thanks Agatha for the lesson but tells her, “I don’t need you to tell me who I am.” Drawing her magic back, Wanda spectacularly embraces her destiny to be the all-powerful Scarlet Witch.

From an anti-Avengers telepath to a chaos magic wielding witch, Wanda has been at the center of some of the most powerful, cheer-worthy moments in the entire Marvel Cinematic Universe. With her time as the Scarlet Witch only just beginning, it’s fair to say the best is yet to come.

Marvel fans can look forward to even more awe-inspiring moments from Wanda Maximoff when Doctor Strange in the Multiverse of Madness premieres on May 4. Which Wanda moment is your favorite? Tell us in the comments and don’t forget to Let Your Geek Sideshow!

Doctor Strange's Best and Worst Moments in the MCU