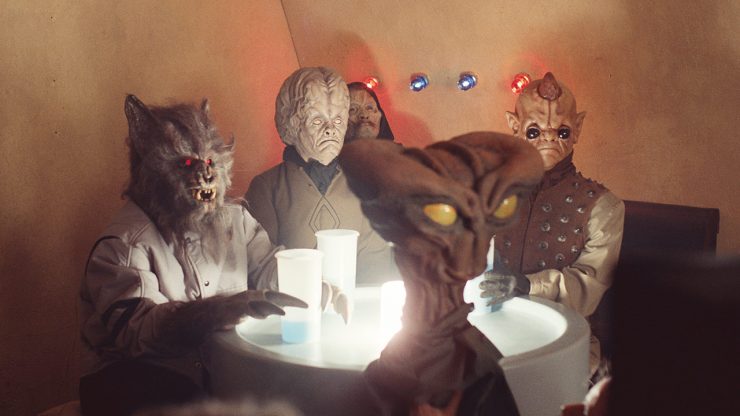 This week, we’re counting down a cantina’s worth of the Top 10 Star Wars Background Aliens!

Bothans are the ultimate background aliens- they are credited with stealing information concerning the Death Star II, enabling the Rebel Alliance to attack the unfinished station. The Bothans also provided the rebels with the door code for the shield generator bunker on Endor.

Kardue’sai’Malloc is a Devaronian male patron of the Mos Eisley cantina, but on Tatooine he went under another alias in order to pass off as a spy. He used to be a cruel army captain on his homeworld Devaron, but he turned out to be a terrible spy. Kardue was featured in the 40th anniversary anthology “From a Certain Point of View”.

Garindan, also known as Long-Snoot, is a Kubaz spy from Kubindi.  He is known for his appearance in A New Hope, particularly in the Mos Eisley spaceport.  His name translates to “Blessed One,” “burnt wood,” “ugly,” and “toast” in various alien languages.  Unlike Kardue’sai’Malloc, Garindan was considered one of the greatest spies in the region, even reporting the presence of C-3PO and R2-D2 on Tatooine.

Kabe was a female Chadra-Fan alien who frequented Chalmun’s Cantina, also known as the Mos Eisley Cantina. She had an appearance like a rodent or a bat, with large ears and a flat nose. She was also in the cantina on the day Obi-Wan and Luke Skywalker came into the cantina, and was also featured in the “From a Certain Point of View” anthology.

Max Rebo is an Ortolan from the planet Orto, known for his blue elephantine appearance.  His original name was Siiruulian Phantele, and he played the red ball jett organ in the Max Rebo band.  Jabba the Hutt was one of his clients, as the band often played for criminals and sleazy clientele.

Hem Dazon is an Arcona male alien who became stranded on Tatooine after spending all his money on salt and juri juice, a juice made of Rodian blood and served at the Mos Eisley cantina. Arconas have triangular heads, two large eyes, and hands with either three or four fingers. Hem Dazon was in the cantina when Obi-Wan Kenobi and Luke Skywalker came to the cantina looking for a pilot to aid them.

Sidon Ithano is a Delphidian pirate, known around the galaxy as the Blood Buccaneer and the Crimson Corsair due to his distinctive red mask and fearsome reputation.  He and his crew raided a downed ship in search of Count Dooku’s lost kyber crystals.  He used to pilot a cruiser called the New Gilliland, and he was later seen in Maz Kanata’s castle on Takodana.

Ree-Yees, a spoofed spelling of Three-Eyes, is a Gran alien who worked for Jabba the Hutt. In Jabba’s palace, he took care of Bubo the frog-dog. The frog-dog hated Yees, and Yees hated Jabba, but he enjoyed the palace life, including cheering during fights in the rancor pit. He also rode on the sail barge to the Great Pit of Carkoon, and was killed when the barge was destroyed.

Aayla Secura was a force-sensitive Twi’lek who was a Jedi Master during the era of the Clone Wars.  She is easily recognized by her blue appearance and her lekku head-tails.  Secura met her demise when Chancellor Palpatine instructed the clones to execute Order 66.  Although the character had a larger role in the Clone Wars series outside of the films, actress Amy Allen was initially part of the visual effects production for Attack of the Clones, and was used as an extra in the Geonosis arena scene.

Taun We was a female Kaminoan who served as an aide to Lama Su, the Kaminoan Prime Minister. Her people accepted the commission from Sifo-Dyas to produce an army of clones for the Galactic Republic. She arranged the meeting between Jango Fett and Obi-Wan Kenobi, being both gentle and fairly naïve, failing to realize Obi-Wan didn’t know about the clone army before arriving on Kamino.

Nien Nunb was a Sullustan smuggler who joined the Rebel Alliance and even co-piloted the Millennium Falcon with Lando Calrissian during the Battle of Endor.  He continued in his service to General Leia Organa, rising to the rank of Lieutenant Commander in the Resistance.  Nunb’s story was expanded on in comics outside of the films, and he became much more well-known beyond his initial appearance in Return of the Jedi.