Hermione Granger is known as the brightest witch of her age. Although her know-it-all nature can be off-putting to some at first, she has the brains to back it up. Her knowledge and skills in the classroom are unparalleled, but her brilliance truly shines when quick thinking is called for and when life and death hang in the balance.

Her ability to plan far ahead, think logically, and respond to risk in the moment are all factors that save herself, her friends, and the Wizarding World throughout the Harry Potter franchise. And not just once but many times over the course of the seven years the stories take place! In honor of Hermione’s birthday today, here are the top 10 times Hermione’s brilliance saved the day.

10. Taking the Blame – Harry Potter and the Sorcerer’s Stone

Following a Charms lesson, Hermione overhears Ron making fun of her for being a know-it-all. With her feelings profoundly hurt, she seeks refuge in the girls’ lavatory and skips the Halloween feast. The spooky celebration is interrupted by Professor Quirrell informing everyone that a troll has broken into the school.

Harry and Ron realize that Hermione is in danger and break off from the rest of the Gryffindor students to help her. She reminds Harry how to cast the Levitation Charm as she takes refuge from the troll’s club. The three students successfully take the troll down but find themselves in trouble with Professor McGonagall for taking on a troll. Knowing that Ron and Harry had come to her rescue at great personal risk, Hermione steps up to take the blame for the entire situation, saying that she had decided to test her abilities by facing the troll herself.

The trio are captured by Snatchers and brought to Malfoy Manor. When Draco fails to positively identify Harry, Bellatrix imprisons Harry and Ron while she interrogates Hermione. Much to Harry and Ron’s horror, Bellatrix tortures Hermione using the Cruciatus Curse and even carves the word Mudblood into her arm with her knife.

While Harry and Ron try to figure out a way to rescue their friend with the help of Ollivander, Luna Lovegood, and Dobby, Hermione resists Bellatrix’s attempts to break her. Even in the midst of suffering, Hermione does not fail to see opportunity. She notes a single piece of Bellatrix’s curly black hair on her own shirt and saves it. This later allows her to brew Polyjuice Potion, disguise herself as Bellatrix, and break into Gringotts to steal a Horcrux from Bellatrix’s vault.

Harry, Ron, and Hermione disapparate hastily from Bill and Fleur’s wedding as Death Eaters descend on the celebration. Once they are safe, she reaches far into her small bag, telling Harry and Ron that she cast an Undetectable Extension charm on it. She pulls a change of clothes out for each of her wizard companions as Ron tells her, “You’re amazing, you know?”

Hermione understood the dangers they faced at any given moment. She thought ahead and packed everything that they could possibly need into her bag, keeping it close at all times in the event they needed to leave quickly.

7. Perceiving Clearly That Which Others Overlook – Harry Potter and the Deathly Hallows Part 1

The trio find themselves at a loss as everything they try to destroy the locket Horcrux fails to work. The Horcrux weighs heavily on each of them as they pass it around and frustration mounts. But Hermione comes to a sudden realization. Although they did not have their hands on the Sword of Gryffindor, Hermione remembers that Dumbledore had attempted to leave it to Harry in his will — and because it’s a goblin-made weapon, it can be imbued with properties that will strengthen it. She knows that Harry had used the sword to kill the Basilisk during their second year at Hogwarts, and she knew that Basilisk venom could destroy Horcruxes.

With all of this in mind, she realizes they need to find the Sword of Gryffindor. Harry remarks on her brilliance, to which she responds, “Actually, I’m highly logical, which allows me to look past extraneous detail and perceive clearly that which others overlook.” Hermione’s abilities to think clearly provide much-needed direction.

6. Incapacitating Umbridge – Harry Potter and the Order of the Phoenix

The members of Dumbledore’s Army are captured and at the mercy of Dolores Umbridge in her distressingly pink, feline-themed office. When Umbridge learns that that she had used up all the Veritaserum, she decides that using the unforgivable Cruciatus Curse is warranted to gain intel.

Thinking quickly, Hermione tells Umbridge that she will take her to a weapon Dumbledore has hidden in the Forbidden Forest. Hermione and Harry accompany Umbridge into the woods. Instead of a weapon, however, Umbridge is stunned to find Hagrid’s giant half-brother Grawp. Matters worsen further for the usurping headmistress when a herd of angry centaurs carry her away, freeing Hermione and Harry to rescue their friends and make their way to the Ministry of Magic.

5. Escape from the Devil’s Snare – Harry Potter and the Sorcerer’s Stone

In their efforts to obtain the Sorcerer’s Stone before it can be taken, Harry, Ron, and Hermione face many challenges set up by their professors to protect to the stone. One of these challenges, created by Herbology’s Professor Sprout, is the deadly Devil’s Snare. The trio find themselves wrapped within its thick, tightening vines.

As panic sets in for Harry and Ron, Hermione remembers that they must relax to escape its clutches. Hermione and Harry are eventually able to relax, but Ron continues to fight. Hermione recalls that the plant wilts in the sun and casts a spell to free Ron. Her knowledge about Herbology effectively saves all three of them and helps keep the Sorcerer’s Stone out of Quirrell’s clutches.

4. Turning Back Time – Harry Potter and the Prisoner of Azkaban 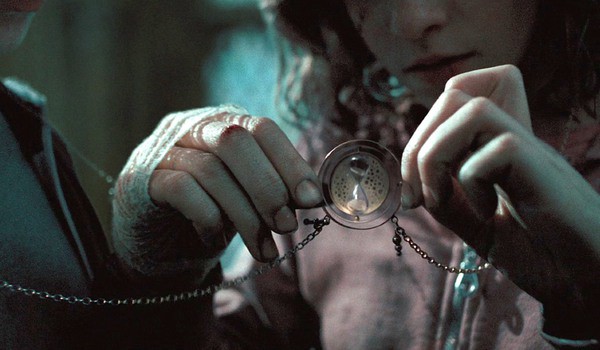 At the beginning of her third year at Hogwarts, Hermione is entrusted with a Time Turner. This enables her to take more classes than she would be able to fit into a typical temporal schedule. At the end of the story, the powerful device comes into play again as Harry and Hermione travel back in time to save the hippogriff Buckbeak from execution and Harry’s godfather Sirius Black from the gruesome Dementor’s kiss.

Even in the hands of accomplished wizards and witches, a Time Turner can be dangerous. Despite the risks, Dumbledore trusts Hermione enough to navigate the intricacies of time travel to further her studies and rescue both Buckbeak and Sirius.

3. Basilisk Expert – Harry Potter and the Chamber of Secrets

An unknown entity is moving through Hogwarts and petrifying students. Hermione goes to the one place she knows that she can find answers: the library. In her research, she learns that it is a Basilisk attacking students. She also figures out that the giant beast is using the pipes to navigate the school’s corridors. She knows that a direct glance from the Basilisk can instantly kill, so she navigates Hogwarts using a mirror to peer around corners.

Ultimately, her ingenuity saves her life. She does indeed come across the Basilisk and is only petrified instead of killed thanks to her hand mirror. When Harry and Ron visit her in the infirmary, they find a crumpled paper relaying the vital information she found clutched within her fist. This information helps Ron and Harry survive as they try to find and face this deadly foe.

Harry, Hermione, and Ron’s heist to obtain a Horcrux from Bellatrix Lestrange’s vault goes awry. The trio find themselves pinned down with a chained-up dragon and guards firing spells at them. In a move equal parts mad and brilliant, Hermione uses a common spell, the Reductor Curse, to free the dragon from its bonds. She leaps onto the back of the dragon with Harry and Ron close behind her.

Her courageous and inspired use of the simple spell leads to a spectacular escape. The dragon climbs through the depths of the caverns below Gringotts, emerging in the bank’s lobby and through the glass ceiling above. The trio is safe to continue their hunt for Horcruxes and the once-tortured dragon is freed.

Hermione’s ability to think quickly and clearly is a boon to the trio from the moment they become friends. Her brilliance becomes key to their survival on a regular basis as they set out on their mission to find and destroy Horcruxes. After avoiding capture by Snatchers for much of their journey, the three teenagers find themselves surrounded. They make a run for it, but eventually Hermione realizes that their evasion attempts are futile. Knowing that Harry is in the most danger of any of them, she casts a Stinging Jinx on his face, temporarily disfiguring him and obscuring his recognizable lightning bolt scar.

This jinx prevents him from being clearly identified when they are brought to Malfoy Manor, leading the Malfoys and Bellatrix to doubt whether they should summon Voldemort. If Hermione had not cast the jinx, Harry would have been recognized. Voldemort would have been summoned, the trio would have been executed, and Voldemort would have won the Second Wizarding War. Given the imminent danger in that moment and the terrible outcome that was prevented, Hermione’s quick thinking in this moment is remarkable.

With everything that the trio experienced together, it is no wonder that Ron noted to Harry in Harry Potter and the Deathly Hallows Part 1 that they wouldn’t last two days without Hermione. Although Harry and Ron’s courage and loyalty were invaluable to saving the day on many occasions, the trio narrowly escape death many times thanks to Hermione’s cleverness and logic. Her intellect and perceptiveness played a key role in their survival and victory in the Second Wizarding War.

Which of Hermione’s moments of brilliance is your favorite? Tell us over in our Atomic Misfits Facebook Group, and don’t forget to Let Your Geek Sideshow!