Apple TV+ has steadily risen through the ranks as a streamer with a collection of solid programs. From Ted Lasso (and its string of accolades) to Dickinson to The Morning Show, the platform has proven it’s capable of churning out quality shows. Mythic Quest, originally known as Mythic Quest: Raven’s Banquet, is one of them.

Spearheaded by Rob McElhenney, Megan Ganz, and Charlie Day (all from It’s Always Sunny in Philadelphia); Mythic Quest follows the antics of a video game studio that produces the most popular MMORPG (massively multiplayer online role-playing game) in the world. Ian Grimm, the creator of the game, boasts an ego that’s just as big as his creation.

Bolstered by a cast of eccentric characters, Mythic Quest is more than just a run-of-the-mill sitcom — it’s a nuanced, poignant look at the struggles of the artistic vision subsisting in a business-centric world. How the entertainment industry is more “industry” than “entertainment.”

“A Dark Quiet Death” came out of left field in season 1. The first four episodes are laser-focused on the core crew at Mythic Quest. Suddenly, here’s an outing about a couple from the ’90s attempting to start a video game business from the ground up. Of course, there’s a connection to the current timeline. The same building in which the said couple builds their business is now the headquarters for Mythic Quest.

Led by electrifying performances from Cristin Milioti and Jake Johnson, “A Dark Quiet Death” chronicles the rise and fall of a creative dream that succumbs to a dark, quiet death. Milioti’s Bean is the stalwart artistic vision that makes one too many concessions for the sake of Johnson’s Doc, who appeases the higher-ups by taking a more business-driven approach to their game.

Unfortunately, the game isn’t the only thing that suffers a “dark, quiet death” — their relationship does as well. This episode is, hands down, Mythic Quest‘s strongest installment to date. 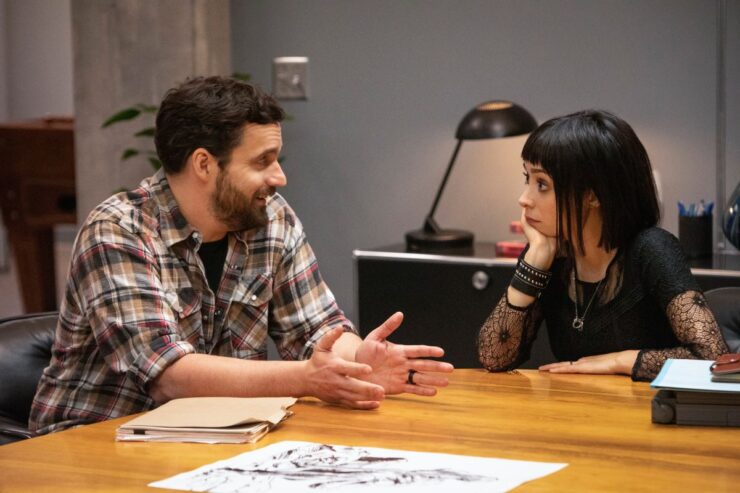 As the name suggests, “Quarantine” was filmed during last year’s lockdown. In addition, it was shot in Los Angeles at a time when it was the number one hotspot for COVID-19 in the country. Each actor essentially had to act as a crew member by filming themselves at home. In the previous episode, Poppy is promoted as co-creative director alongside Ian, so “Quarantine” focuses on a Zoom meeting with the core Mythic Quest team.

The beauty of this episode is in its perceived simplicity, although it took a significant amount of work to execute it. There’s one scene in which we see a complex Rube Goldberg-style experiment start on the Zoom window of one character and subsequently play out on the remaining Zoom windows. It’s brilliant and awe-inspiring.

But the highlight for me is Charlotte Nicdao’s performance. Nicdao, who portrays the usually high-energy Poppy, perfectly encapsulates how lonely isolation is, and how a lot of us felt during the lockdown. Ian sacrifices potentially contracting COVID by showing up at her house to give her a big hug. It’s such a touching moment of friendship in the face of global adversity.

“Everlight” fast forwards through COVID and focuses on the crew going back to work. Ian and Poppy decide to throw a company-wide LARPing event entitled “Everlight.” It’s an annual get-together meant to boost morale and evoke a sense of belonging. The LARP brings out the eclectic personalities of the staff, from the bloodthirsty Jo to the nonconfrontational David.

The end sequence is, to put it succinctly, badass. We see Ian and Poppy square off against Brad, the shark-like head of monetization. The real world fades to a medieval-esque landscape rife with magical flora and fauna. Brad morphs into a formidable creature while Poppy launches fireballs at him and Ian wields a legendary sword. It’s larger than life, just like this show. Additionally, this scene feels like it could exist in the world of Raven’s Banquet, the company’s new video game expansion pack. “Everlight” is a massive delight.

If there’s one thing Mythic Quest does well, it’s period piece one-offs. While season 1 had “A Dark Quiet Death,” season 2 gave us “Backstory!” This episode explores the backstory of C.W. Longbottom (F. Murray Abraham), the loquacious and pompous story writer for Mythic Quest. We see his humble beginnings as a copywriter in Los Angeles in the 1970s. With a lot of assistance from famed sci-fi author Isaac Asimov, C.W. releases his first novel to critical acclaim.

This episode is a wonderful bird’s-eye view of a seemingly overconfident writer who’s really a broken, scared little boy on the inside — one that loses the girl he loves and sacrifices the story he wants to tell in favor of fame and glory. It’s heartbreaking and mesmerizing, with a far out ’70s soundtrack and gritty, period-appropriate cinematography.

What happens when you get two Academy Award winners in one episode? Academy Award-worthy performances. F. Murray Abraham’s C.W. Longbottom pays a visit to Peter Cromwell, his friend-turned-rival from his earlier days. Cromwell is portrayed by William Hurt. Needless to say, “Peter” unfurls like a play, with Abraham and Hurt inhabiting the roles of two Shakespearean-like personas.

It brilliantly touches on the often complex relationships we have with people from our youth. We often make careless and emotionally driven mistakes when we’re young. But it’s never too late to mend fences, and Peter’s admission that he’s dying catalyzes C.W.’s decision to make amends.

“Peter” is a tender, vulnerable display of the inner workings of a decades-long friendship. 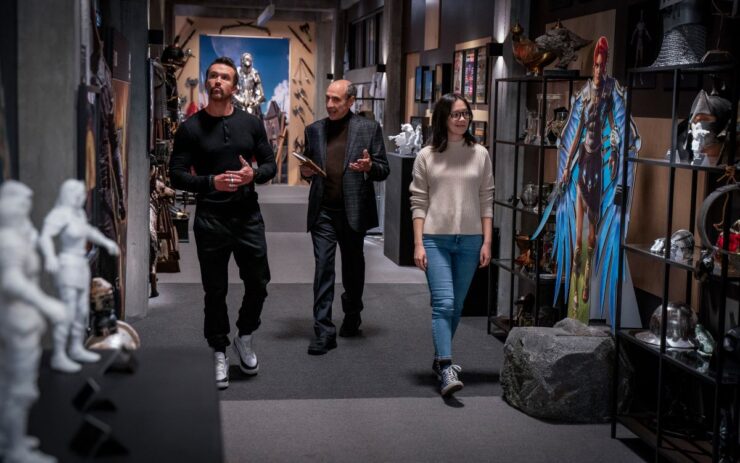 The final episode of Mythic Quest season 2 is a game-changer. Poppy and Ian decide to leave the studio to start their own game. Brad is arrested for insider trading (a crime he didn’t commit). However, he gladly takes the fall for it, hoping that it gives him “street cred” among his finance contemporaries. Rachel and Dana quit Mythic Quest to move to Berkeley so the former can attend the writing program there. This leaves a harried David in charge of, well, everything.

“TBD” leaves us with so many cliffhangers that it would be a travesty if the series isn’t given a third season. It’s a fresh start — a clean slate. Additionally, it adds another layer to the richly nuanced friendship between Poppy and Ian. It’ll be interesting to see these two bold personalities attempt to create their own game together à la Bean and Doc from “A Dark Quiet Death.” The parallels!

What are your favorite Mythic Quest episodes? Sound off in the comments below and Let Your Geek Sideshow!