At first glance Squid Game seems like another fight-to-the-death story, something we’ve seen before in the Hunger Games franchise or the Japanese action-thriller Battle Royale. But, like those films, this South Korean drama is so much more than gratuitous violence. The series combines classic kid games, brutality, high stakes, and complicated characters — both heroes and villains — and the internet just can’t get enough of it. It’s an addicting combo that is set to make Squid Game Netflix’s most-watched series ever.

So, let’s talk about the global phenomenon. Keep reading to see what it’s about, what the games are like, and why the whole world has been glued to their screens.

What Is Squid Game About? 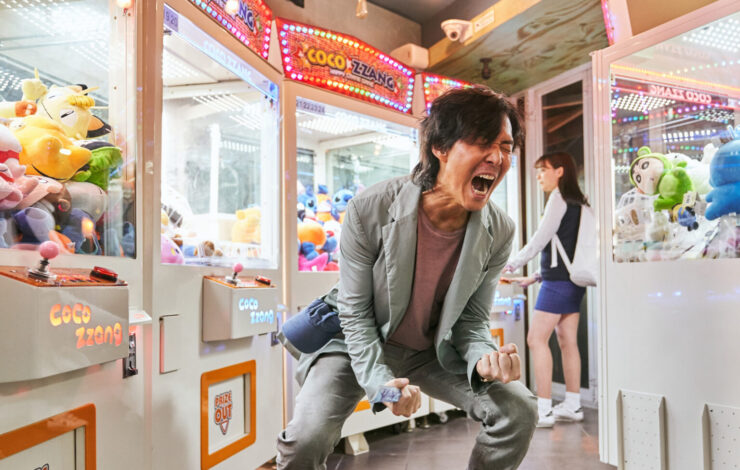 “Hundreds of cash-strapped players accept a strange invitation to compete in children’s games. Inside, a tempting prize awaits — with deadly high stakes.” Before Squid Game gets deadly, it starts simple enough. The story opens up with Seong Gi-hun, a deadbeat father and irresponsible son with a gambling addiction.

We watch as Gi-hun’s struggles increase. His debt almost costs him an eye by the hand of loan sharks. He’s about to lose his daughter as his ex-wife and her new husband plan to relocate to America. His luck seems to have completely run out until he meets a sharp-dressed man on the subway.

K-drama fans will recognize the actor as the legendary Gong Yoo, and moviegoers will recognize him from another South Korean smash hit, Train to Busan. Gong plays an unknown man, offering to play Ddakji (a game similar to Pogs). If Gi-hun wins, the stranger will award him money, but each loss will result in a hard slap to the face. Of course, this scene foreshadows the violence that will come later in the series, but it also shows how desperate for cash Gi-hun is.

Beat up but glad for some money, Gi-hun gets a card from the man as an invitation to a more sinister game. It’s only after he accepts that the fight-to-the-death games begin.

The Childhood Games of Squid Game

Seong Gi-hun and a total of 456 contestants must win in popular Korean kid games. Winners go on to continue playing for a chance of 38 million dollars. Losers die immediately. Those are the rules.

You may be wondering, but why kid games? Of all the deadly scenarios, surely there could have been something more sinister than marbles. Even the title itself is a reference to a kid game. Writer and director Hwang Dong-hyuk didn’t want viewers to get sidetracked keeping up with the rules of the games. Instead, by having contestants compete in easy-to-follow games like tug of war and marbles, he believed viewers could focus on the real story. They could be immersed in the character development when players must make life or death choices — choices that often put players at odds with each other and make enemies of friends.

I won’t get into spoiler territory, but there is one specific episode where we see friends go head to head. Of course, the loser will lose not just the game but their life. Just a heads up: You may want to watch with tissues ready.

The Viral Appeal of Squid Game 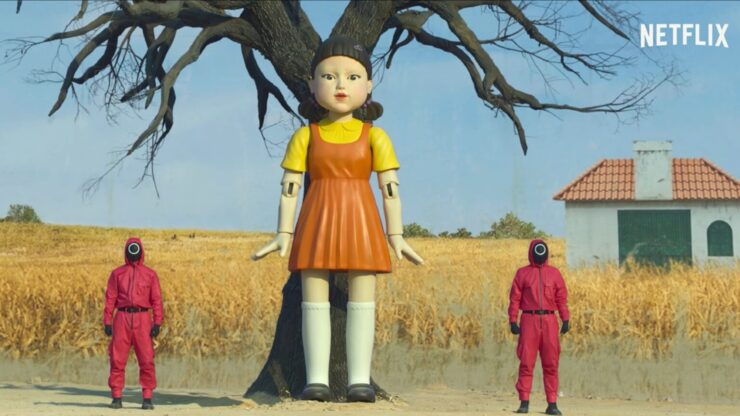 Director Hwang Dong-hyuk might have had a narrative-based reason for choosing kid games, but this choice also gave us aesthetically pleasing shots — and the internet has had a ball turning these vivid school kid games into memes and TikTok challenges.

Hwang knew mugunghwa kkoci pieot seumnida (translated as “The hibiscus flowers bloomed” which is an alternative name for Red Light, Green Light) would get everyone’s attention since it’s “one of the most simple games … So we thought it could give the most shocking plot twist at the end.” The end he’s referring to would be the death that awaits any player caught moving after the enormous animatronic doll finishes her song. In the series, the robot turns to the players once she’s done with her line and kills anyone caught moving.

Of course, the fact that Squid Game is prime material for memes and TikTok challenges only boosts its reach. Just look up #squidgame on TikTok to see video after video devoted to the show. Another popular challnege on the app is found by searching #squidgamecandy. TikTok users try to cut shapes out of the ppopgi (dalgona candy) to the Red Light, Green Light song.

Why Squid Game Is A Global Phenomenon

Squid Game is set to break the record for most-watched series on Netflix. It is a certified global hit. If you’ve seen the show, you understand why that is. Many elements of the deadly challenges speak to viewers all around the world.

The simplicity of the children’s games gives us time to think about what we would do — and how we’d feel — if we were playing ourselves. It makes the heartbreak and guilt all the more tangible when we see the character we’re rooting for making decisions that will save themselves and kill someone else. We wonder if they’ve made a mistake or if the prize is worth their morality.

But the show isn’t just about the individual characters. It’s about money and debt, and the way money affects people. “I wanted to write a story that was an allegory or fable about modern capitalist society, something that depicts an extreme competition, somewhat like the extreme competition of life,” Hwang explains.

The show does an excellent job of showing the hopelessness that comes with debt — something so many young people around the world can relate to. It shows how desperate we become when cash is at stake because we all know our world does revolve around it.

Sometimes, we do feel like the protagonist, Gi-hun, as we’re down on our luck and desperate for a better life. Squid Game, like all effective horror, taps into the fears we try to hide from and exposes them for all to see.

Which Squid Game challenge was your favorite? Do you think you’d make it to the end? Let us know in the comments and don’t forget to Let Your Geek Sideshow!