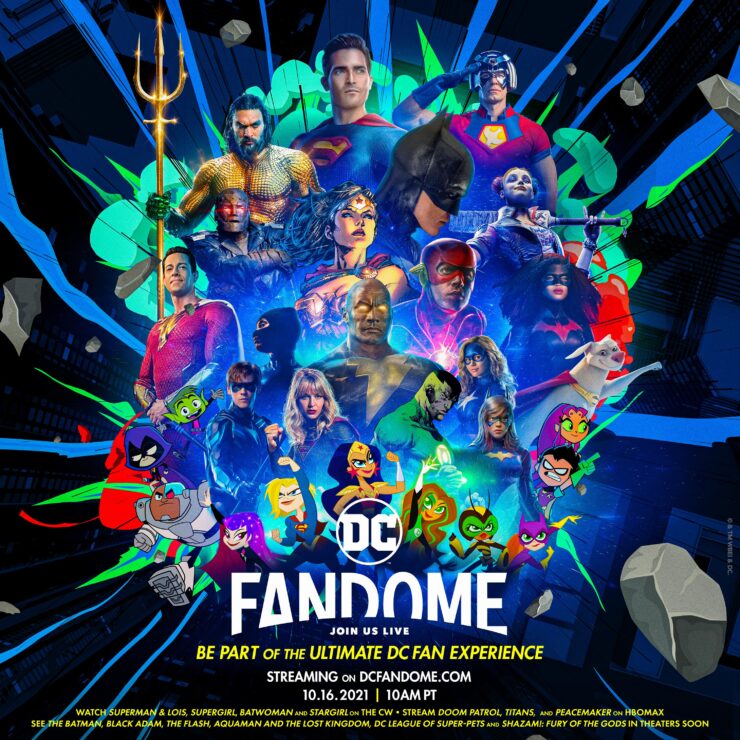 DC Comics released a trailer for their upcoming event DC FanDome. This is the second year for the event, and DC is pulling out all the stops.

The trailer opens with a fast-paced theme, as string instruments rush along and the beat of a heavy drum emphasizes each action packed word. “DC Fans are you ready?”

First we see Batman in his Batcave, donning his cowl. A thug with makeup inspired by The Joker shouts, “What the hell are you supposed to be?” Batman looks up and growls out the words, “I’m vengeance.”

Then, as the drums keep beating, a flurry of DC Comics films and games flash across the screen. The Batmobile’s turbine engine ignites, Harley Quinn stands in front of the Suicide Squad, then leads them in a battle against Superman.

When DC FanDome returns on October 16, this trailer promises updates and explorations of The Batman, The Flash, Black Adam, Suicide Squad: Kill the Justice League, Peacemaker, Gotham Knights, Supergirl, Batwoman, Titans, Superman & Lois, the Batman/Fortnite crossover, and so much more!

All fans are welcome to an ALL-NEW EPIC STREAMING EVENT celebrating everything DC. Join us for #DCFanDome at https://t.co/SyKFjcIr1y on October 16 💥

PLUS calling all kids and families! Meet us in the DC Multiverse at #DCKidsFanDome. pic.twitter.com/sFl0DNDn5m

DC shared a poster for the event, revealing even more characters from the comics and cartoons that would get some of the spotlight, including Green Lantern, DC’s League of Super-Pets, and more. DC Comics‘ own Peacemaker account responded with a bit of wit saying, “love this poster, but would love it more if i was just a smidge taller than superman.”

love this poster, but would love it more if i was just a smidge taller than superman

Naturally, to continue the announcement on his own terms, Peacemaker released a poster that only featured him and his car with stars, stripes, and a bumper sticker that reads #DCFanDome 10/16, with a license plate spelled PSS • MKR.

give peace a f#cking chance pic.twitter.com/dWFEeMA9BU