Bingpot! Brooklyn Nine-Nine‘s final season has arrived, and while we’ve officially entered our mourning period, we’re also excited to see what this last ride holds in store for our squad. After soon-to-be eight glorious seasons on the air, all good things must come to an end. Admittedly, Brooklyn Nine-Nine was luckier than most sitcoms. Not every show gets to consistently thrive for eight years while being showered with praise from audiences and critics alike.

Season 7 ended with a citywide blackout, which split the core Nine-Nine group. Terry and Holt were stuck in an elevator, leaving an incredibly pregnant Amy in charge. Meanwhile, Jake and Boyle investigated the origins of the blackout. Inevitably, Amy went into labor but everyone was eventually present for the birth of McClane “Mac” Peralta, Jake and Amy’s beautiful baby.

So, to commemorate the beginning of the end, I’d like to dive into what I want to see in the rest of the final season of Brooklyn Nine-Nine. Cool. Cool cool cool. No doubt, no doubt. 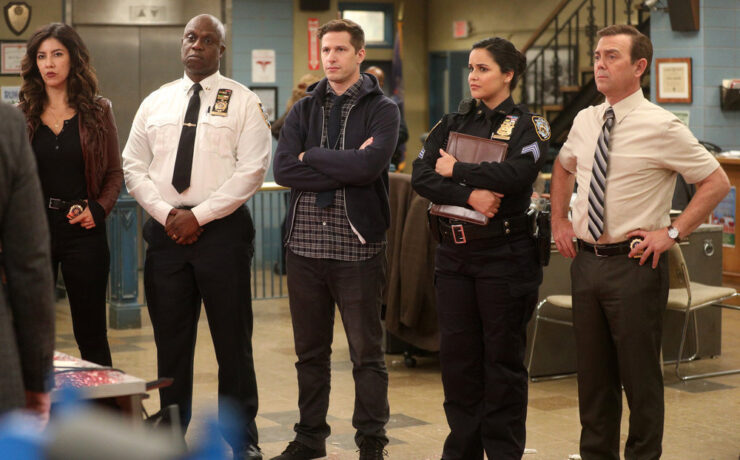 Brooklyn Nine-Nine hasn’t, at least to my subpar memory, had a musical sequence or a musical episode. Admittedly, I’d settle for the former. It’s not uncommon for comedies to go the musical route — even genre shows are doing it. Perhaps the Powers That Be don’t want to succumb to sitcom norms.

That being said, you have gifted vocalists like Stephanie Beatriz and Joel McKinnon Miller at your disposal. They could bring in Lin-Manuel Miranda again to help write a song. Plus, Andy Samberg can bring his Lonely Island prowess to the table and pen a catchy tune.

Jake’s “frenemy” has to return for the last outing. It’s not a proper season of Brooklyn Nine-Nine without everyone’s favorite endearing petty criminal making an appearance. Better yet, another karaoke session with Jake and Doug Judy would be everything. What if Judy makes a CD for little Mac, complete with original tunes dedicated to the son of his BFF Jake? I’m not crying … you are.

I wouldn’t be surprised if Doug Judy had to help the Nine-Nine with a seemingly unsolvable case that only he can crack. 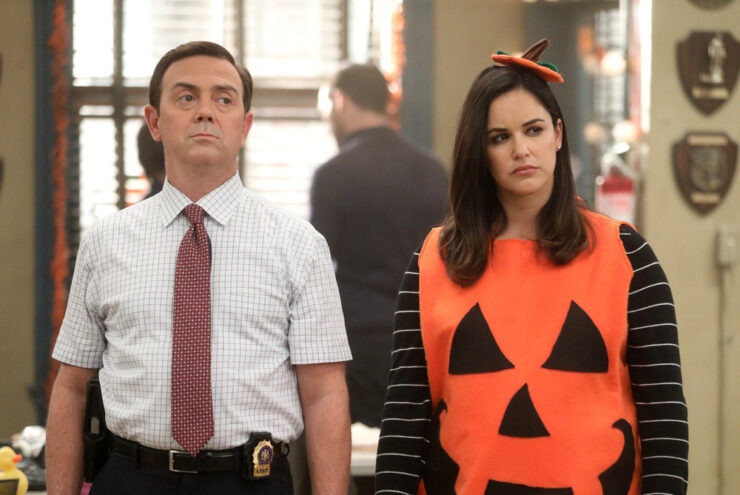 Brooklyn Nine-Nine usually keeps our current seasons in mind. Yes, we had “Valloweaster” last year, which still implemented the competition to determine the greatest human/genius. But, for the previous five seasons, we were blessed with the annual Halloween Heist, a spooky-themed outing that epitomized the holiday for me. Of course, the show changed networks, and with that came winter season premieres for the last two years.

Screw that — give us a full-fledged Halloween episode, complete with a large-scale heist. Please bring it back to the good ol’ days for this last go-round.

The Return of Adrian Pimento

Maybe this is solely me wanting to see Jason Mantzoukas in everything, but we need an Adrian Pimento comeback, even if it’s for just one scene. Of course, Pimento’s boisterous, sometimes overwhelming energy can only be taken in small doses, but that’s part of what makes him so funny.

Pimento could have a reunion with Rosa. I don’t want them back together, but I’d like to see them get along sans romantic/sexual tension. 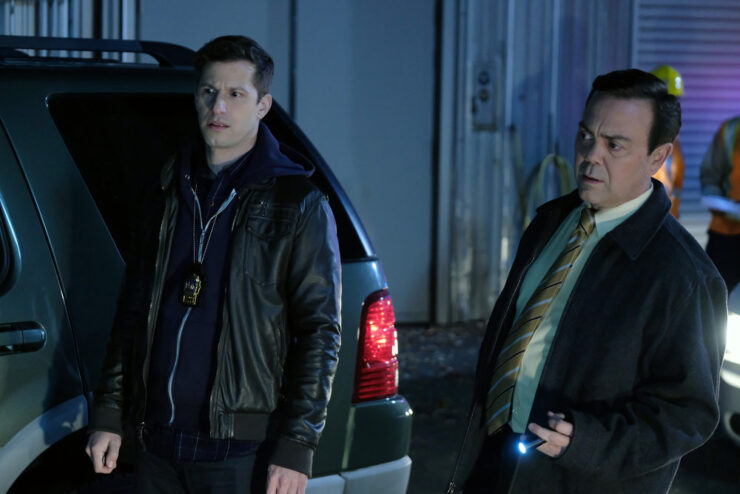 Remember the Christmas episode from season 3 when a slew of criminals took Jake, Boyle, and Gina hostage in that department store? Essentially, Boyle had his own Die Hard moment. As per Boyle’s usual, he botched John McClane’s most famous catchphrase: “Yippie kayak, other buckets!”

Now, it’s time for Jake to have his moment in the Die Hard sun. What if the gang returns to LA and Jake has to scale the side of the Fox Plaza (AKA Nakatomi Plaza)?

This is what the people want — a babysitting plot with Captain “Dadptain” Holt. Jake and Amy would be going on a much-needed date. Unfortunately, Boyle’s unavailable, as is everyone else on the squad. Thus, Holt has to fall on that sword. While I’m sure hilarity would ensue for a Holt/Mac episodic B-plot, I can also picture our fave captain excelling at child care.

Maybe they could consume flavorless beige smoothies together. 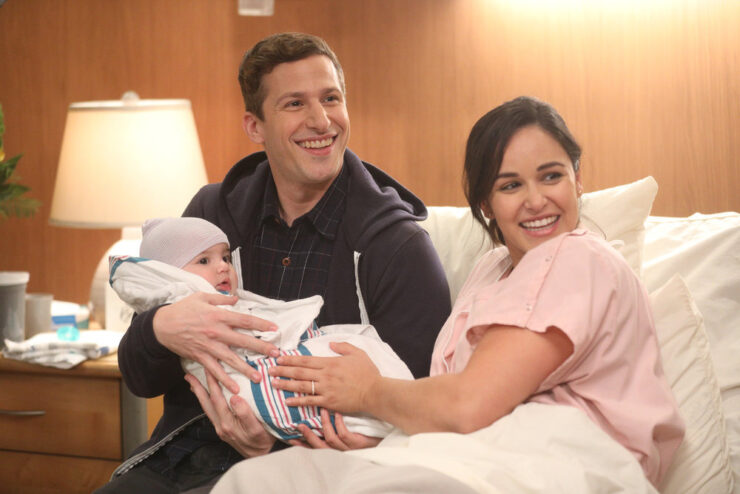 Ever since Brooklyn Nine-Nine‘s first season, it was well known that Amy harbored dreams of being the youngest person promoted to captain. Now, let’s take that next step by promoting her to lieutenant! Even if the series doesn’t end with her captaincy, I’d like to see her aspirations flourish in that regard. Although, they could pull a Parks and Recreation and give us a flash-forward.

Gina Linetti Coming Back for the Finale

Despite Gina’s departure in season 6, she’s still a vital cog in the Brooklyn Nine-Nine machine. While we didn’t see her in season 7, there’s still a chance she’ll return for the series finale. Perhaps we’ll be blessed with a lyrical dance from the Queen of Dance herself, AKA the human form of the 100 percent emoji. Regardless, it only feels right to have Gina Linetti Spaghetti Confetti back in the Nine-Nine, even for a short time.

Before my words get twisted, I don’t mean “happiness” in the romantic sense. I mean personal contentment. I’d like to see Rosa riding off into the sunset on her motorcycle as she embarks on a cross-country trip. Just her and her ax. Granted, if the Powers That Be give Rosa an awesome partner that wholeheartedly loves her for her, I’ll be happy. In addition, I would love to see Rosa as a hardened private eye, Jessica Jones style — just as long as she’s kicking all the criminal ass.

A Detectives vs. Firefighters Battle

This is mainly an excuse to bring back Patton Oswalt, but what if we were blessed with a “detectives versus firefighters” skirmish? I could see the firefighters squaring off against our crew in a competition similar to The Jimmy Jab Games. Obviously, keep it lighthearted and fun, but bring on the childish insults. I live for those.

What would you most like to see in the final season of Brooklyn Nine-Nine? Let us know in the comments, and don’t forget to Let Your Geek Sideshow!