Nobody foresaw how popular The Mandalorian™ would be or that approximately 5 million spin-offs would spawn from it (I jest, I jest). Well, perhaps Disney knew the series would be a boon for them. Enter: The Book of Boba Fett™, the latest spin-off featuring Temuera Morrison as the titular bounty hunter turned crime lord of Tatooine™ and Ming-Na Wen as his right-hand warrior, Fennec Shand™.

Like any avid Star Wars™ fan, I’m excited to return to a galaxy far, far away and give Boba Fett™ his chance to shine. Of course, as with all of their projects, Disney keeps details regarding The Book of Boba Fett under lock and key, so all we can do is speculate. And speculate we shall! Here are six things we’d like to see in The Book of Boba Fett.

We know Boba was close with his father, Jango Fett, and swore vengeance against Mace Windu™ after Jango perished in the Clone Wars. Given that Boba’s story hasn’t seen too much exposure on the small screen, it would be nice to get some flashbacks featuring Boba as a child with his dad. See him grow up on Kamino™ and learn how to be a badass bounty hunter from Jango.

Of course, we saw baby Boba in Star Wars Episode II: Attack of the Clones™ interacting with Obi-Wan Kenobi™, but what if we saw more of Boba and Jango’s encounters with Kenobi? I know I’m asking for the moon, especially since Ewan McGregor will soon appear in his own Kenobi-related TV series. However, it would be a fun way to tie everything together. 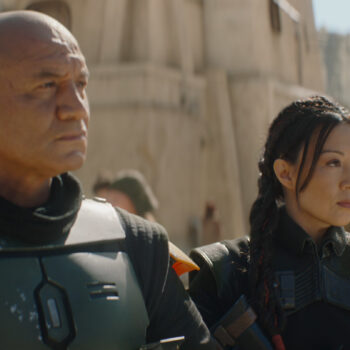 I love that both Boba and Fennec share Kaminoan ties, and The Book of Boba Fett should explore Fennec’s origins in particular. Early in her bounty-hunting career, a Kaminoan scientist, Nala Se™, commissioned Fennec to capture Omega, a clone. Fennec was only in two episodes of Star Wars: The Bad Batch™ — not exactly a wealth of origin story covered during her brief appearances.

How cool would it be to see more of Fennec’s adventures as a young assassin? Maybe we could get a live-action version of her fight with Cad Bane™? Fennec also worked as a mercenary for the Hutt™ clan, so the show could delve deeper into yet another connection she shares with Boba.

Boba working for Jabba the Hutt™

Perhaps I only added this because I want to see more of Jabba (call it a lust for nostalgia), but Boba’s time with Jabba the Hutt played a pivotal role in his career. What about the missions we didn’t see on screen in the original Star Wars films? We could get a glimpse of Boba’s journey delivering Han Solo™ to Jabba and how he lost Han’s carbonite body during the process (as detailed in the recent canon comic book, Star Wars: War of the Bounty Hunters™).

At one point, Boba even traveled to Coruscant™ and disintegrated three rebel spies, but Darth Vader™ refused to pay Boba because there were no corpses. The Book of Boba Fett could show us a little more of Boba’s ties to Vader. Sure, half of the items on this list are related to the past, but there aren’t any TV adaptations featuring Boba’s backstory.

Appearances from the Bad Batch

What if Fennec reunites with Omega? Or perhaps a very, very old Cad Bane returns for round two? Okay, so that’s the stretch to end all stretches, but it might be fun to see some of the animated characters adapted for live-action. Exhibit A: Ahsoka Tano™ and Bo-Katan Kryze™! Major highlights from The Mandalorian.

So far, in typical Disney fashion, we know nothing about Jennifer Beals’ character except that she plays a Twi’lek. Many female Twi’leks face a life of enslavement by the galaxy’s wealthiest players. But something tells me that Beals’ character might be in a position of power. We know Bib Fortuna had a cousin, Beezer™, who was more politically minded, working for the Partisans with Saw Gerrera™.

Perhaps Beals’ character is related to the Fortuna family, and she decides to exact revenge against Boba for the murder of Bib. Maybe she wants to replace Bib and knock Boba off the throne. Or she sees an opportunity for political advancement, a rarity for a female Twi’lek, and hopes Boba will help her climb that ladder.

It sounds an awful lot like Pedro Pascal’s Din Djarin talking with Boba Fett in the official trailer. This potential vocal cameo begs the question: Will Djarin appear in The Book of Boba Fett? Since The Mandalorian serves as the anchor show to The Book of Boba Fett and the upcoming Ahsoka, I think it makes sense to have Din Djarin appear in them. Take a page out of the MCU playbook and keep everything as connected as possible.

The Mandalorian‘s third season comes after The Book of Boba Fett, so the season could end with Djarin returning to Tatooine to ask for Boba’s aid in retrieving The Child again. After all, I can’t see the Mandalorian staying separated from his adopted son, AKA Grogu™, for long. This theory could serve as a tie-in to the upcoming season of The Mandalorian.

With a whole new series comes a whole galaxy full of possibilities! What would you like to see in The Book of Boba Fett?

Sound off in the comments below, and don’t forget to Let Your Geek Sideshow!

Hawkeye: The Watch, Echo, and What's Next