Get a closer look at the Batman ‘Modern Age’ Life-Size Bust!

Dark Knight. Caped Crusader. World’s Greatest Detective. Batman goes by many names in Gotham City, but aliases aren’t the only thing that Bats has several of… 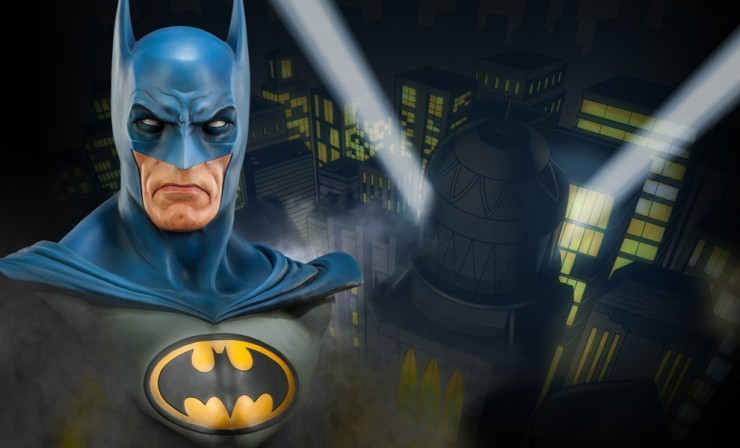 Since Batman’s first appearance in 1939, there have been more than thirty-five iconic incarnations of the Bat-suit (not to mention hundreds of variations for special occasions.) We know every fan has their favorite, so we’re pleased to introduce a new look with the Batman ‘Modern Age’ Life-Size Bust!

Towering over two feet tall, Sideshow’s artisans have brought the timeless DC Comics hero to life once again with the expertly sculpted, hand-painted Life-Size Bust, featuring Bruce Wayne’s menacing expression and unmistakable jawline. This time, fans who bonded with Batman in the 80’s and 90’s will be delighted to see that we have given the Caped Crusader his grey suit, blue cape and cowl, and yellow oval Bat symbol, as seen in ‘Modern Age’ comic appearances.

We won’t argue which Bat-suit is our favorite – instead, we think legendary comic book writer Grant Morrison said it best;

“I love Batman in every incarnation. For me, that was the secret of the character. Batman can encompass any interpretation, which is what makes that character so brilliant.”