Gwen Stacy or Mary Jane – Who will steal your heart?

What a tangled web love weaves. But it’s not hard to see why Spider-Man fell for both the sweet and lovely Gwen Stacy, and the quintessential girl next door, Mary Jane Watson…

Gwen Stacy will always be considered Peter Parker’s first love. Bright and charming, ‘happily ever after’ was a real possibility for the New York police captain’s daughter until the night Gwen Stacy died – a tragedy that would forever leave a profound effect on Peter Parker, and intense controversy among comic book fans.

Capturing the beautiful blonde heroine on an afternoon stroll through the rain, the Gwen Stacy statue is expertly crafted in high quality polystone and hand painted with bold high contrast colors in J. Scott Campbell’s signature style. Her knowing smile and carefree stride suggest that a certain web-slinger is watching over her wherever she goes.

Face it Tiger, you just hit the jackpot!

Arguably one of the greatest romances in comic book history, Mary Jane was originally destined as a mere casual rival for Peter’s affections. But after the loss of Gwen, deep feelings developed between Peter and MJ and they blossomed into a match made in heaven. Fiery and loyal, it’s said that what doesn’t kill you only makes you stronger, and nothing could describe Mary Jane more perfectly.

We’ve brought the red-headed comic siren to life with the Mary Jane statue, the first release in our J. Scott Campbell Spider-Man Collection. Echoing his immensely popular cover illustration from The Amazing Spider-Man, Campbell’s original design depicts the exuberant Mary Jane waiting in anticipation, while her friendly neighborhood boyfriend is off to answer the calls of ‘great responsibility.’ But wrapped up tight in Peter’s jersey, and perched on an ottoman surrounded by tabloid reminders of her heroic love interest, they are never too far apart. 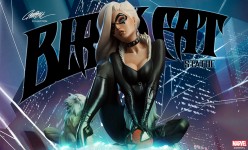